Another one bites the Sand

So our last battle for the campaign, this time CA vs Haqqislam in Power Pack with the Asteroid Blues extras (hence the Raicho). He won Initiative and took first turn, I was fine with that, my Noctifier was waiting. This was his first game against CA, so I took only a medium amount of new rules for him. All free standing walls are bulkheads and are infinitely high. On the pictures a mine next to a model signifies death. First a video of deployment and pictures of the armies. Then the narrative. 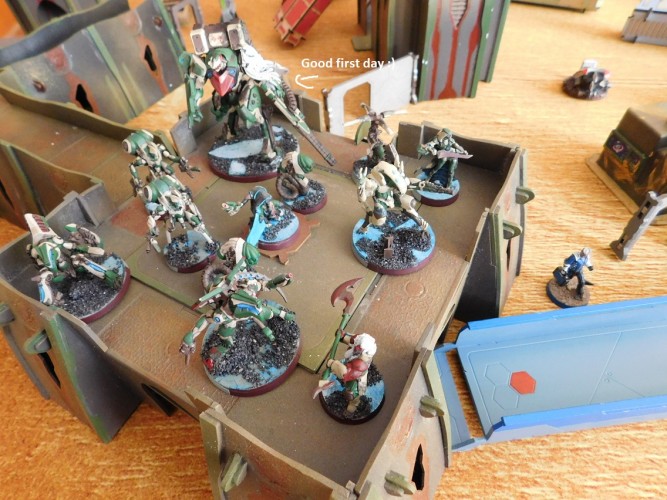 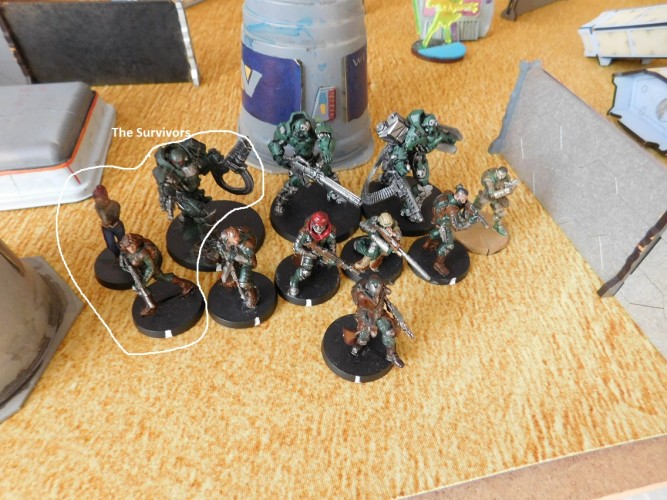 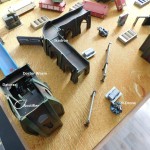 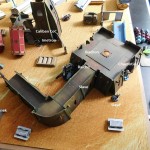 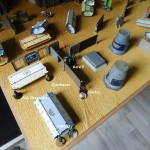 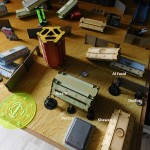 Operational report: Noctifer Draax. Location en route to new assignment.
I and Caliban Skraal were in place at position 13/34 close to the Batteries. Main Target (ref. Briyan Stanek) was in close vicinity. Haqqislam forces came in to intercept. Aspect Styx assured me support to be on the way. The ground was sewn with ash, sand and dust from all the destruction from the last weeks. We had to take control of the local power flow to open the route to our extraction point and secure the pathway consoles.

The Raizot just had arrived when the humans advanced on a wide front. I took a shot at the first visible heavy armour (Azra'il), but missed their shots missed me as well, but the Raizot took the heavy down. Their Sniper with Visor aimed at me, I was faster and he went down. My map showed much movement on both sides. Both combatants returned to vigour. They were digging in for a counter assault.

(He started with a coordinated advance, Noctifier and Raicho shot at the Azra'il, Azra'l and Djanbazan at the Noctifier. It was over 48 inches to the Noctifier so his 12 to hit dropped to 6 and I survived. He gave it another go and I hit him with a 5 and he saved 2 of the hits. His doctor ran around and revived the Azra'il and the Djanbazan. The Djanbazan tried again on a 6 and missed, as did I, his Zhayedan advanced. On the other flank the Feuerbach Azra'il and Al Fasid took better positions ) 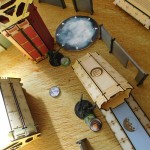 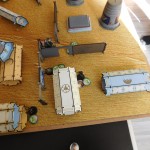 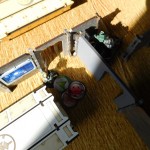 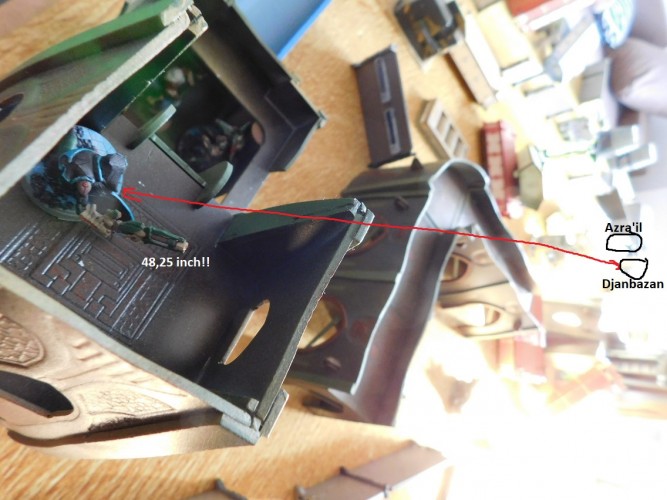 Our Daturazi advanced through a service tunnel, while the Raizot took down the Sniper and fires a mine to cover it and the heavy. The aspect advanced and attacked the foremost human, it got hit twice, it also survived the attack of the Raizot. While the Raizot attacked the heavy was taken out by the mine. Styx ordered me to participate and we all three shot at the human, who then went down. A tough one. Caliban Skraal advanced towards the first power relay. Styx advanced and gunned down another human, the Raizot placed another mine to cover the remaining hostile on this flank.

(The Raicho took down the Djanbazan who again tanked two hits and was only unconscious. It then took me 4 orders and the Charontid, the Raicho and the Noctifier to kill the Zhayedan, who put a wound on the Charontid in the process. Tough guy. The Ghulam HMG was not so lucky and lost 5 wounds to the Plasma Rifle, also the only crit this game. The last living one on his flank was a doctor, who had a mine next to him and a Charontid watching him.) 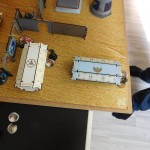 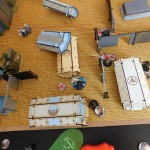 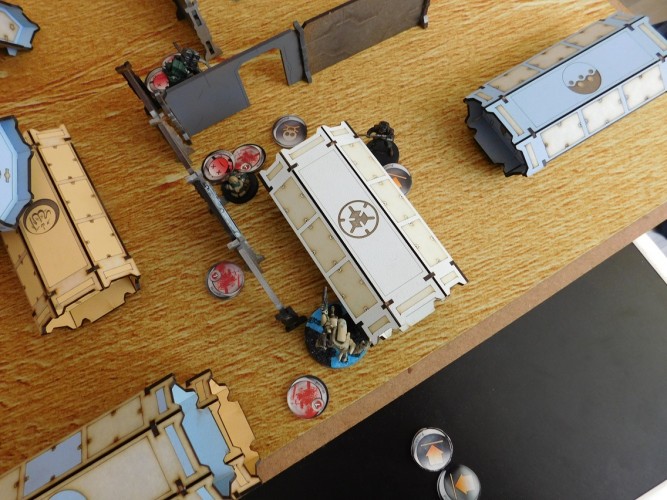 Not looking good for the doctor.

The humans seemed disorganized. One of the victims seems to have been in charge. The Mine destroyed the last human close to the Aspect.
Another heavy advanced and fired at me, I returned fire landing my missile twice, then she stopped, but I saw her moving again, after another hostile reached her. These humans know something about mending.

(The last Ghulam on his left shots his Medkit into the Azra'il, misses and is killed by the mine. Flank eradicated. The Feuerbach Azra'il takes on the Noctifier and takes two missiles, losing one wound each time. With command tokesn uses to flip orders, the Azra'il is revived)

[Sorry no pictures for that :(]

With the way mostly clear Caliban Skraal advanced to the first Power relay and rerouted the power acoordingly, while on the way to the next relay the Aspect killed a human (Coup de Grace on the Djanbazan) and disguised itself (Cybermask), to advance on the pathway console. Our Daturazi put down cover and one of our Ikadrons ran towards the heavys and sprayed everything with flames. The heavies remained standing, but their healer was taken out, as was the Ikadron. Maybe they should make him tougher.
The Raizot shot at the heavy I took down before and she died.
(Securing the right flank and spending five orders on the Caliban, switching on two consoles, I was in a good spot. The Ikadron made a run for it and flamed the Azra'il, Al Fasid and Doctor, but only the Doctor failed his save and it went down. The Raicho took a long range shot out of cover and took down the Azra'il for good.) 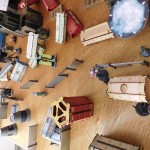 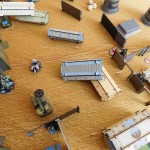 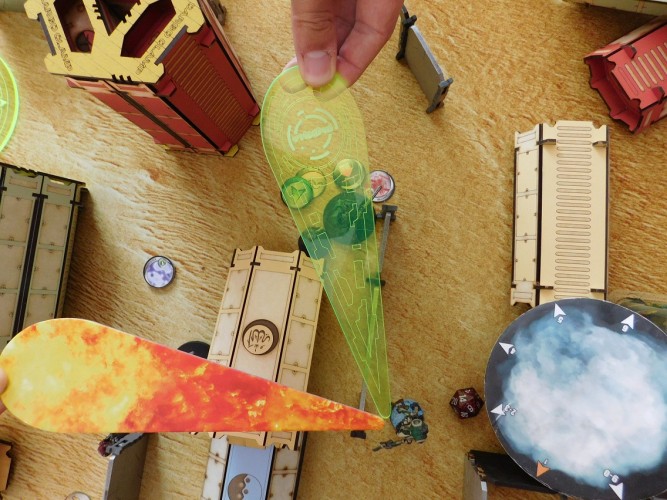 The last humans put cover over the Ikadron and one of them advanced on it, ripping something out (In Exteremis recovery). Then he ran and tried to get his comrade to safety, but was shot down by the Raizot (Attempt to Casevac).

With almost no opposition the Aspect secured the Pathway console and our Obsidian sent one of his slaves to recover data from an obvious civilian (HVT: Retroengneering). They retreated and we took our asset (ref: Briyan Stanek) with us to our escape ship.
The mission was a full success.

(His Khawarji ran to the Ikadron to do his classified, but was killed while doing the second one. I had enough orders to secure his console and do one of mine. The other one was Test run, but I lost only one Str during the whole game, so I couldn´t do it.
It ended 9-1 and I lost only an Ikadron, while he would have been in retreat in a theoretical 4th turn. My Noctifier had a good game and he did not have a good answer for him. Also his army was rather slow, which is problematic in this mission. He learned much he said and still had a good game.)