A new enemy, a new experience

Yesterday’s game took place at the Xaraks Battery, in Power Pack mode.
It played Combined Army against Haqqislam in a 300 point fight.

This was my first fight against the Combined Army and was very instructive …: D

“Nael, are you sure we’re right here?” With heavy steps, Junis walked through the shattered buildings of the Xaraks Battery in his Al Fasid armor.
Mud, debris and cartridges lay on the streets, creating a portrait of the horror of the campaign.

“This is me. It took us almost 2 weeks, but the information has been ratified. There must be a console somewhere with the evidence of the journalist’s compromise. “Nael shouldered his MK12 and wiped the sweat under his turban.
“It should be in your interest to find this information. After all, you shot her to pieces. ”

“Oh, do not remember that. It was just a little misunderstanding. Besides, it was completely crazy. “With a dismissive gesture, he dispelled his thoughts and secured the environment with his HMG. “Pretty bleak place. Here O-12 has come right … and the CA is rushed through here as well. Maybe we’ll find injured people on the way? ”

“That’s why we have our three doctors with us.” Sal pointed to the back of the three Ghulam. “In addition, Ghulam Abu will help us with the coordination. He takes on the role of lieutenant. “An older, bearded man showed a big grin and a raised thumb. Immediately after, he drank from a small brown bottle and handed it to Sal, a nearly identical Zhayedan, who gratefully accepted the bottle.

Farther back, two tall figures secured the small group. The Azra’il Mordai and Shila, his daughter, talked quietly with Umran, a Djanbazan. While the AP HMG and the Feuerbach anch left and right, the Djan had laid his Sniper Rifle loosely in the crook of his arm.

“Look, there’s the console in front!” Nael pointed to a former console for a path control. “The journalist reportedly logged in here when she was guarded by Alev, Liyah and Amir. Has she started behaving strangely for a while? “The three Ghulam nodded almost simultaneously and confirmed the question.

With a chip Nael secured the console and pointed to Ghulam Abu. “Your train.”

Ghulam Abu took the lead and divided the group into two security groups.
On the left, Sal came in behind a container assisted by Umran with his Sniper Rifle. Behind a bulkhead, Mordai positioned himself with his AP HMG and surveyed a corridor in front of him. “Looks calm.”
In the back Alev made himself comfortable and adjusted his medkits. Abu stayed in the back area.

On the right, Al Fasid Junis and Shila lined up with their Feuerbach and secured the central corridors. Two doctors each stayed behind. Nael stayed behind the group and tried to get an overview via uplink.

“Guys … believe it or not … I got a signal from our crazy journalist. She hides between us with a few containers. In addition, other antennas seem to be active in front of us. Explain journalist to the HVT.
Tasks: Secure the HVT and data backup at the antennas. Keep our route control locally and, if possible, take over a second further north.

Get exactly at 12 o’clock and whole front incoming enemy identifications. CA! I transfer the data to Abu! Coordinate defense. ”
Abu: “Here Abu, spot snipers on a tower in northeastern direction! Open the fire! “ 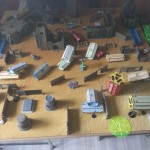 "Azra'il ', Al Fasid and Djan, move forward and find better position for defense. On visual contact, fire on the position at the tower. "
Djan took the target at that distance and missed twice (48.25 ").
But the Noctifier retaliated with a rocket and the Djan could only barely survive. (1 wound).
Attracted by the fight, Mordai was spotted by a Raicho and simply shot.
"Oh Allah!" Alev took his first aid kit and ran first to Mordai and then cautiously proceeded to Umran (Djan). With great skill and a lot of tact he got both back on his feet.
Out of sheer frustration Djan put on again and missed again. Cursing, Umran leaned against the wall. "Lying here on the presentation plate."
"Hey, Sal here, will be a bit of a distraction." Sal took an upstream position and shouted loudly, "Come on, here I am!"
The right wing took better positions.

Abu: "Recognize enemy movements! Attention! Something is coming through a tunnel in the east!
Djan, head down a Raizot ... damn, Djan like, Alev, get ready.
Mordai, a mine was thrown at you, did not move. "" Oh, lick me! "The Azra'il thunders through the comm as well as the cluck of his HMG. Shortly thereafter, something explodes and it gets quiet.
Abu: "Sal, take cover, massive movements are approaching you."
Sal belches into the comm: "Should just come!" Plasmaladungen and projectiles thunder into the cover of the Zhayadan. "Thinks that's enough to get me down, eh?" Just as he throws his bottle at the next Charontid, he sees a missile approaching. "Oh shit, should have taken another sip ..." With a loud bang, the position of the old Sal is pulverized.
Abu looked over his cover, right into the face of the Charontid and his plasma cannons.
With the last words "damn fitting name ..." Abu evaporates.
As the last man on the left, Alev sits next to a mine and the Charontid. "Shit..." 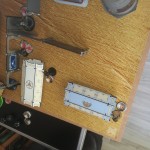 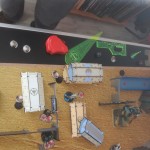 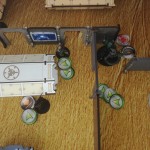 "Get the shooter from the tower, by the beard of Allah!" Nael shouts into the comm and Shila puts her Feuerbach on the tower. The tower is demolished, but whoever sits there has a damn good cover. After two tries, Shila collapses and does not move anymore.
Meanwhile Alev tries the last possible and puts his MedPistol on Mordai to revive him. Due to the blood on his hands, however, the handle slips out of his hand and he misses the Azra'il. There is no time to regret, because the mine makes short work and sends it in parts of it.
Amir begins to move on the right side, wakes Shila up again and taps her encouragingly on the shoulder. "That will be again!".
Nael moves forward to better cover his people. "Left flank collapsed, I take command and get me a picture."

Nael: "An enemy (Caliban) is moving toward us from our left flank. This pig has stabbed again on Umran! Unbelievable pack! Now he runs to our path control. Probably more will come soon! "
Junis roars into the comm and immediately afterwards the right flank hell is turned out of flames. Thanks to the warning, the disaster could avert, but Amir crashes in flames to the ground. Even Al Fasid Junis escaped and could make the attacking Ikadron harmless.

"That was close ..." Shila could not finish the sentence, which a further shot of Raicho stretches her down. 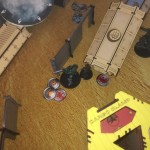 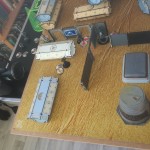 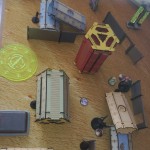 Nael storms from his cover and rips out some boards to the Ikadron. "Nobody will save you anymore!" He hunts around. "We have to get out of here! Junis, grab Liyah and get out. I'm trying to take Amir with me. "Jumping from his cover, Nael picks up Amir, but just as he wants to get back, he is hit by the Caliban and also sinks to the ground on the board.
"Disappears! And do not forget the HVT. "... and darkness surrounds Nael.

He does not cope with how a worm crawls to the journalist ... 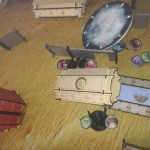 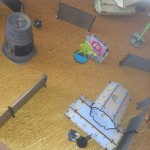 This was, as already written above, my first game against the CA, as well as against such a DAY.
My troupe "Sandstorm" has sold their skin in any case expensive!
The games in this campaign were the first games for me with Infinity. Unfortunately, it will take a while until the upcoming campaign, but it gives me the chance to get better and practice :D 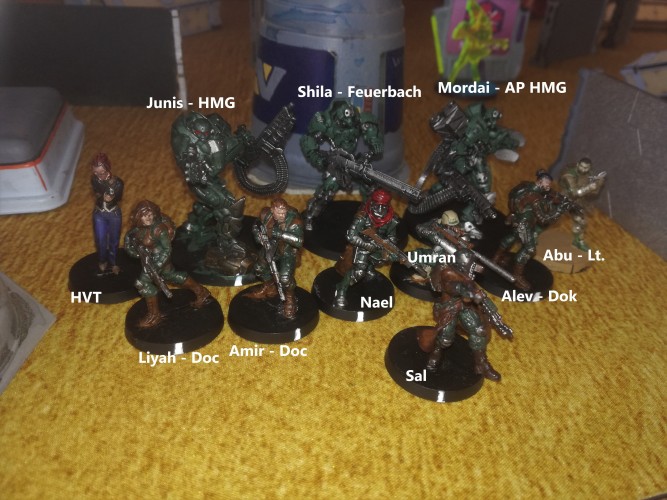