Retaliation at the Battery Field...Barely 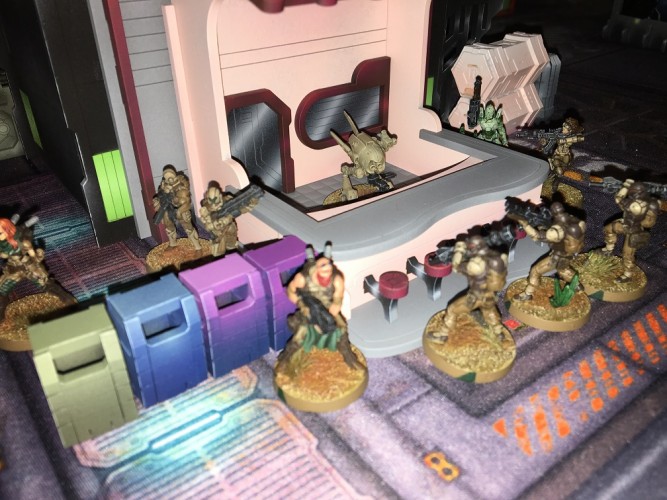 The strike force discuses our attack over Rafiq-vended teas. 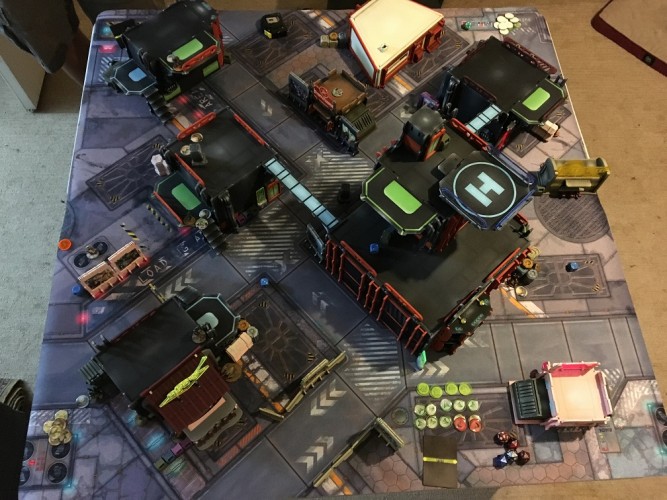 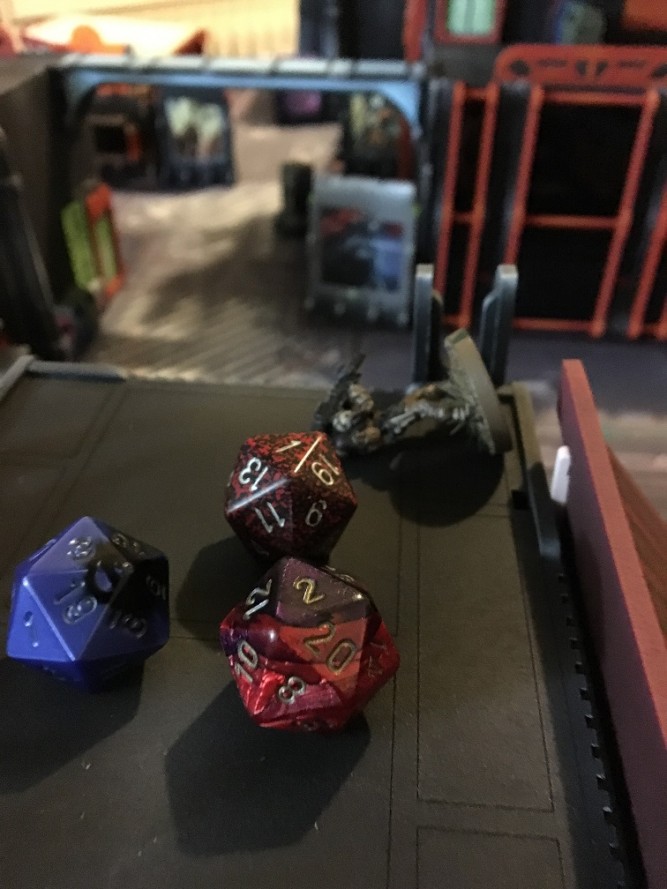 The lead Muyib fumbles his rocket launcher and is shot down by a viciously bleeding Rosie Murnoe. 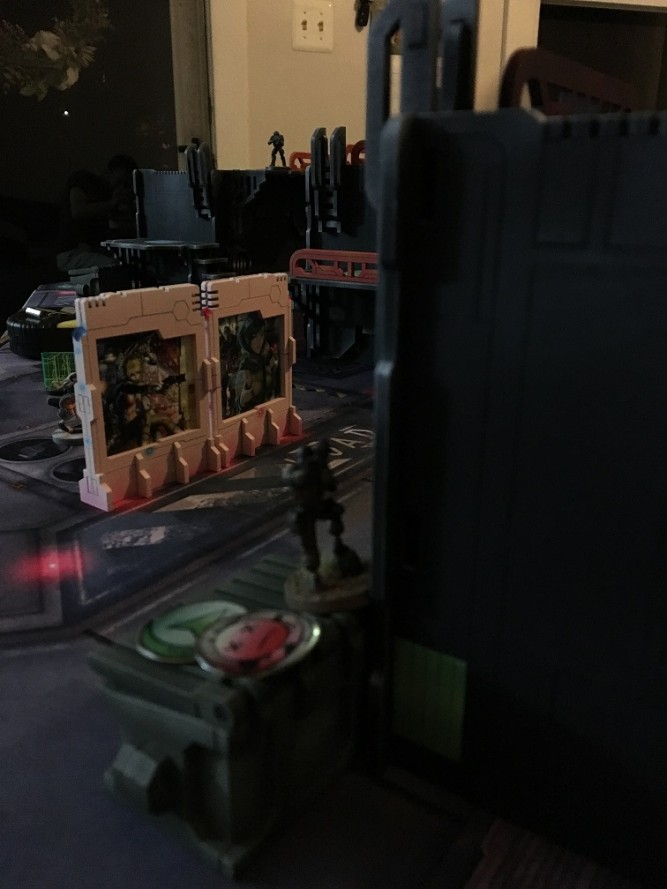 The second Muyib heavy rocket launcher goes down to a single long range rifle shot from a USAriadna grunt.

Perhaps, in retrospect, ordering a retaliatory strike on the Ariadnan battery field was done in haste. The attack gained us little beyond some short-term sabotage, and the cost in lives was hardly worth the lhosts of which we are in such short supply; nevermind the tedious process of uploading Hassassin conscious' using the old ways. But, the strike was organizaed in a fit of pique and cannot be undone. We deployed far from the main Ariadnan garrison--a reinforced fireteam of Marauders--and sent a lone farzan minelayer and one of our ghazi muttawi-ah to delay their approach. They did, managing to down three of the team, but our progress was surprisingly stymied by a hardbitten defense from the USAriadna garrison force.

With a full fireteam behind him, our lead Muyib on central overwatch paid for a second's inattention when a wounded an bleeding Rosalind Munroe rounded a corner and put two nearly perfect shots into his chest, while his own late-to-the-party shots flew over her head or impacted around her. He went down in an inferno of light rocket launcher carried napalm; he almost didn't have time to scream.

Our second rocket launcher wielding Muyib, confident in his team and smilingly mockingly at his dead comrade, stepped out and immediately caught a single, golden BB to his left temple from a lone grunt on the left flank, leaving our main effort down two men and bereft of long range firepower. Unable to make further headway, both the left and right flank battery control consoles were activated by the Ariadnans to divert power from this section of the battery array. We would never reach the consoles, although in a last ditch effort we shot down the grunt on the right console and prevented fine control over the transfer. 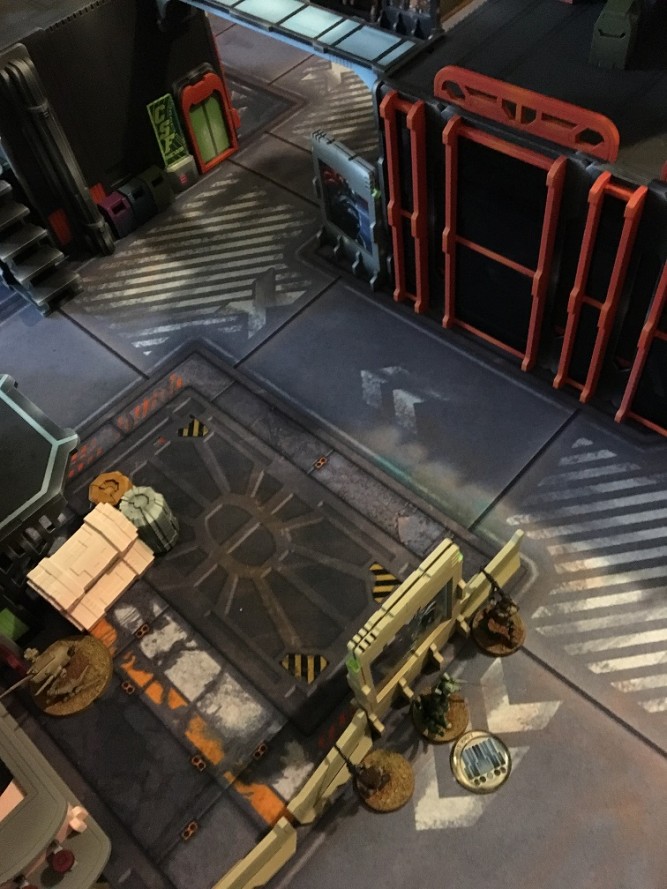 Myself, our Asawira attachment, and the stalwart Leila Sherif make a final push to secure and destroy the Ariadnan battery node. 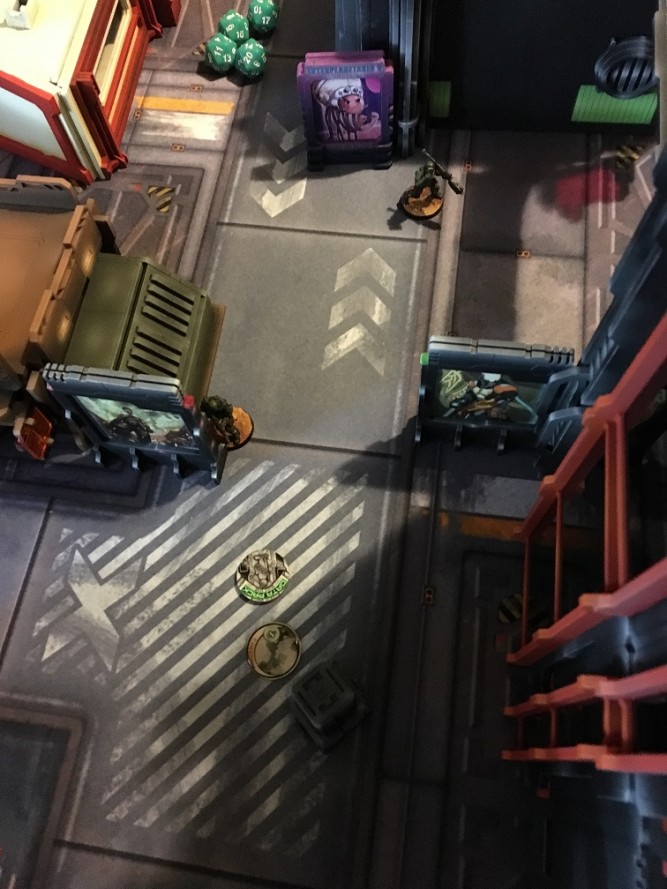 The Ariadna forces surround the central node, daring us to approach. 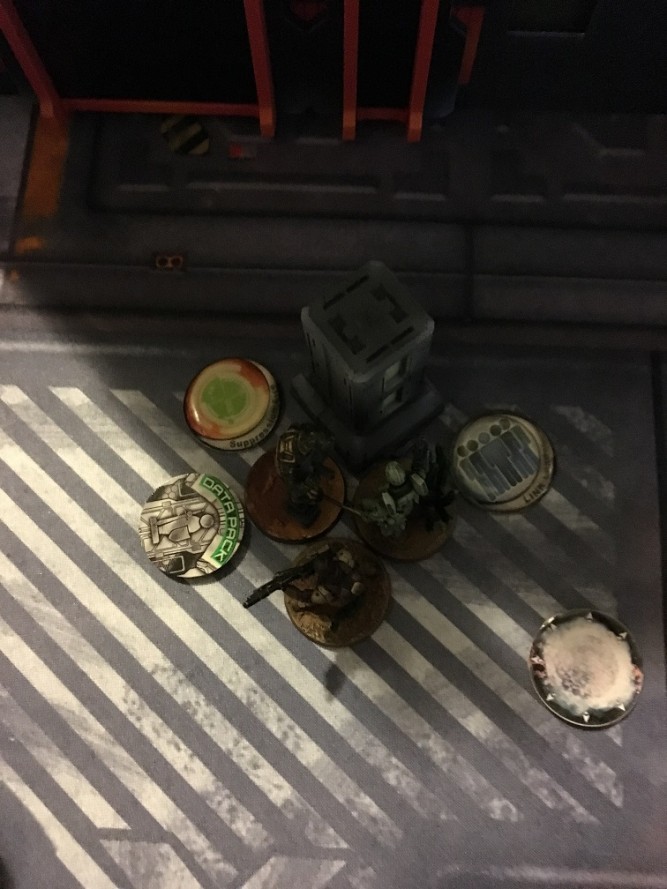 Under cover of smoke, our Asawira advances into the controlling foxtrot, but she dodges away! 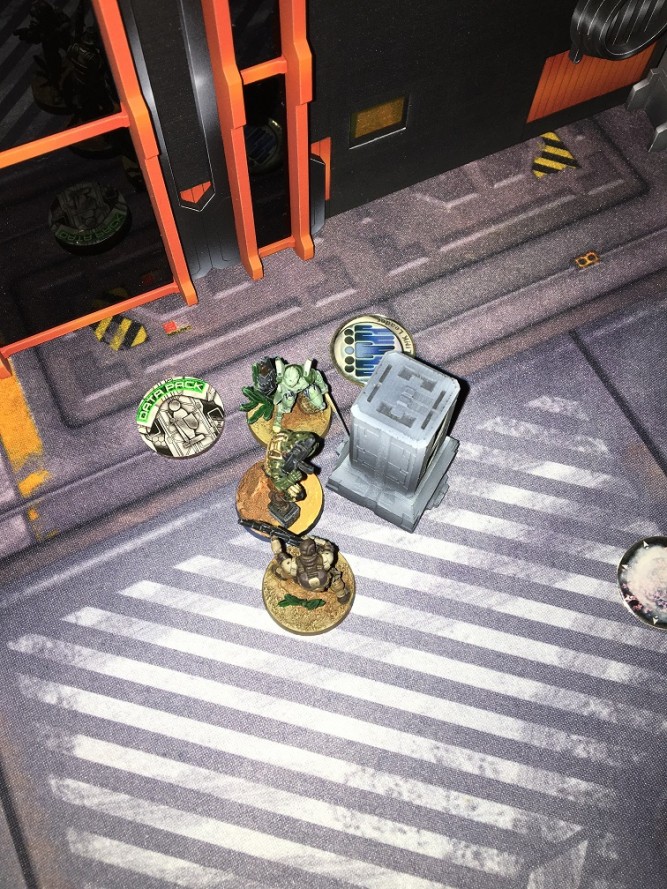 With our final gasp, the Asawira and I flank the foxtrot and just barely put her down, allowing us to vent the caustic contents of the battery array to space.

With the enemy controlling for the central node and the flank consoles, I knew I had an imporatnt call to make. We were down to only three remaining members in our core team: myself with my grenade launcher, Leila Sharif, and our periodically present Asawira (assigned seemingly at random by Haqqislam high command to make sure the Hassassin stay in their appropriate lane). A single Farzan, unable to safely reach a console, and our Rafiq remote were the only other troopers remaining in our strike force. I quickly send my plan to my compatriots, and we moved out.

I laid down a smoke screen next to the central console that would allow us to approach unseen, but not without triggering the anti-personnel mine that a foxtrot ranger had deployed before opening up with a barrage of suppressive fire. Confident that the plan was understood by all, I charged forward intent on triggering the mine. The mine blasted me with shrapnel, but my armor held; I escaped harm this time. Charging forward with the Asawira while ordering Leila to attempt to secure the left flank console, we charged forward and engaged the foxtrot ranger in hand-to-hand combat. Despite his sufficient skill, the Asawira tripped in the thick smoke and the foxtrot was able to dodge away from our smoke screen. Chuckling to myself about my wildly fluctuating fortune, I ordered Asawira to flank around the central objective to secure it, while I charge straight out of the smoke into the suppressing fire of several Ariadnans. Fortune was with me, as I escaped unscathed, while the Asawira finally managed to deal a glancing wound to the foxtrot and put her one the ground (last order of the game! First CC the Asawira used CC1 and rolled a 2 and a 4, while the foxtrot rolled an 8! Second one both hit, but the foxtrot still made one armor save; super close.)

Knowing we had won a pyrrhic victory at best, but hoping I had performed well enough to warrant reserection, I ordered our force to withdraw after the Asawira vented the local array's entire supply of sulfuric acid to space. To distract the forces as we pulled away, I downed the grunt forward observer securing the right flank control console, reducing the transfer of power and making our victory just somewhat greater.

Or at least that is what they tell me happened. I was reloaded into a fresh--if unaugmented--lhost in order to continue my service to the Hassassin order and the search for knowledge. This is exactly what I plan to do, but perhaps not against the nation of Ariadna. I believe our dispute this day has been settled, and an adequate toll extracted from each belligerent. God willing, this conflict will not escalate from the skirmish we experienced today.