Ain't No Cure For The Asteroid Blues 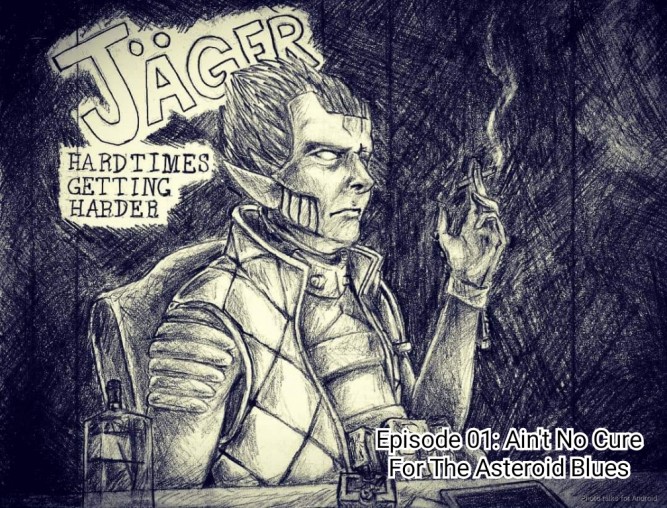 Hard times are getting harder.
My ash try is in need of emptying. Small tendrils of smoke, like some deep-space monster, curl up from the butts of the cheap cigarettes I had had developed an affinity for on Dawn, stretching out, almost lovingly, towards the air scrubber in the ceiling. As I fished another from out of the pack, I took brief notice of the warning label printed on the side, the words 'May be hazardous to your health' stuck out in particular. More like these will definitely. Just like this job. But I did not expect this body would survive long enough for me to have to suffer the effects, so I fired up the lighter.
I suppose it is best to start from where the investigation left off. After the incident on Kurage, it looked like we were closing in on the fugitive serial arsonist known as Artichoke Lou. However, the sudden push by the Combined Army on Paradiso, saw a massive influx of new Tohaa contingents coming through the Daedalus Gate to reinforce the human forces in the system, and the trail became muddied.
Naami had sent a copy of her cube to be part of Ambassador Seegur's delegation and was set to address the High Council on Ereeva to present evidence the proceeds of Lou's chain of restaurants appeared to be directed towards financing some secret enterprise and not towards his own personal enrichment. The currier craft was destroyed by apparent Combined activity shortly after take off. At the same time, in another system, a satellite housing her secure Cube backup had a freak malfunction and entered a decaying orbit leading to its fiery destruction. Within an hour Naami was assassinated. Well, technically it was listed as an accidental fatality when a delivery drone's thrusters failed causing it to fall into traffic, striking her convoy and killing everyone inside. Luckily, she had paid for the deluxe recovery package, and my backup servers were numerous and scattered throughout several systems. Even still whoever was behind all this uncovered and destroyed some of them, and must have killed me several times as well, because the location of the body I have found myself in was definitely not the next on the list my cube was programmed to download into should recovery of the last be deemed impossible.
I am not one prone to thoughts of conspiracy, but the timing of all of this was too much to ignore, and with Shasvastii infiltrating the Human Sphere, conspiracy is a pretty good guess. However, what bothered me the most was how well orchestrated it all was. It alluded to a vast network of unknown operators within too many systems of the Human Sphere, so either the Shasvastii had penetrated further into the Human Sphere than anyone was willing to admit, the Hassassins had singled us out, or some other unknown organization was behind it all. But no organization this size can operate in a vacuum, and people love to talk. Humans even more so.
After consulting with her through her Cube backup, I arranged to get Naami brought back into a new body through one of the suppliers I still trusted, and was arranging to have another backup sent through the Daedalus Gate as part of a Chaksa's messages home, so she could randevu with Ambassador Seegur's delegation.
Then the Gate collapsed.
This would definitely be a testament to arrogance to think this was part of the conspiracy to silence us instead of an unfortunate coincidence, especially since whoever may be after us should have thought us both dead for a least a few more weeks. But the timing of its collapse, and the sudden assassination of Seegur on this side of the Gate seemed to point towards the same groups involvement.
Tohaa leadership fractured, and many Trident commanders were left scrambling to determine their next course of action. Some of them took up with the new commercial enterprise dedicated to hunting down the Shasvastii said to be responsible for the collapse of the Gate, known as the Spiral Corps. Then came word of Shasvastii infiltration of the Abyss Blockade, and O-12 authorization of Tohaa military force in the area to help contain the threat.
It looked like we had become stuck between a rock and a hard place, and that hard place was an asteroid, and what is an asteroid other than just another big rock? After moving Naami into hiding, I decided the best way to continue my investigation was to get involved with the conflict in Novyy Bangkok, and the Tohaa forces had been directed towards the Jiyuan Open Pit Sight.

I was unfamiliar with the team I had been assigned to perform recovery for, but I was familiar with most of the divisions they worked for, though some such as the sour faced Kriigel Agent, or the soft spoken, reedy looking operative who introduced himself as a Covert Assault Unit, were less familer to me.
We had been on sight for only a short time before our activity was disrupted by a contingent of Varuna operating in the area. It seems whatever they were doing there, they wanted to keep it a secret as well, and with the temperatures in the pit about to drop to leather it would be a scramble to reach the heating device controls.

The main visible threats were the Kamau Sniper and its team of Fusilers, and Patsy and her HMG toting Kamau companion, but I there were also some irregularities showing up on our readouts that indicated camouflaged units, which were likely to prove to be just as dangerous. 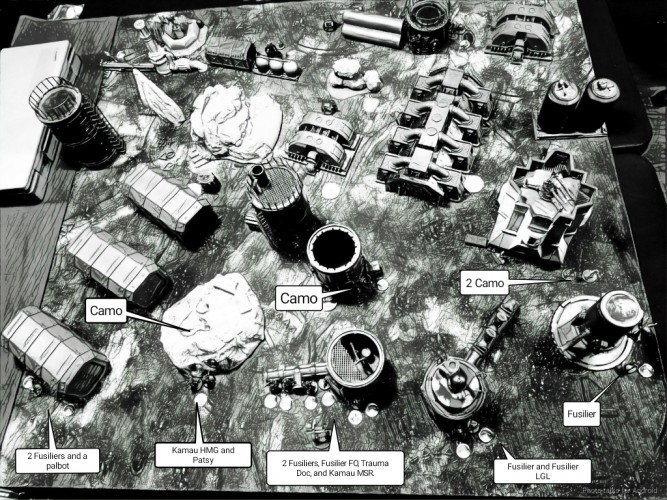 Our forces spread out, with the Kiel-San, injecting its Symbiont with an assortment of stimulants, turning it into a mass of corded muscle twice its original size, positioned itself to cover the midfield, and the Sukeul's team positioned itself to cover the left flank. The Kumotail positioned herself to be able to medic either of these operatives should the need arise, and the Kamael WHD's team set up on the right flank in the hopes that no dedicated push would be made there. 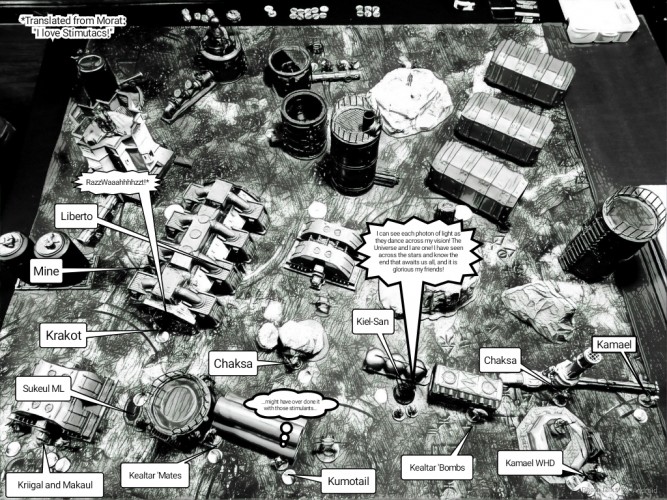 One of the suspicious blips on our readout moved into position revealing itself as a Zulu Cobra to discover the Liberto's mine, and destroy it with a burst of Combi rifle shots. With this obstacle out of the way, the other blip began to move. There was only a brief hint of movement before the Enemy Zulu Cobra with Spitfire opened fire upon the Sukeul. Her shots went wide as her Sybmiomate encouraged her 'armor, but the stress was too much, and both perished. 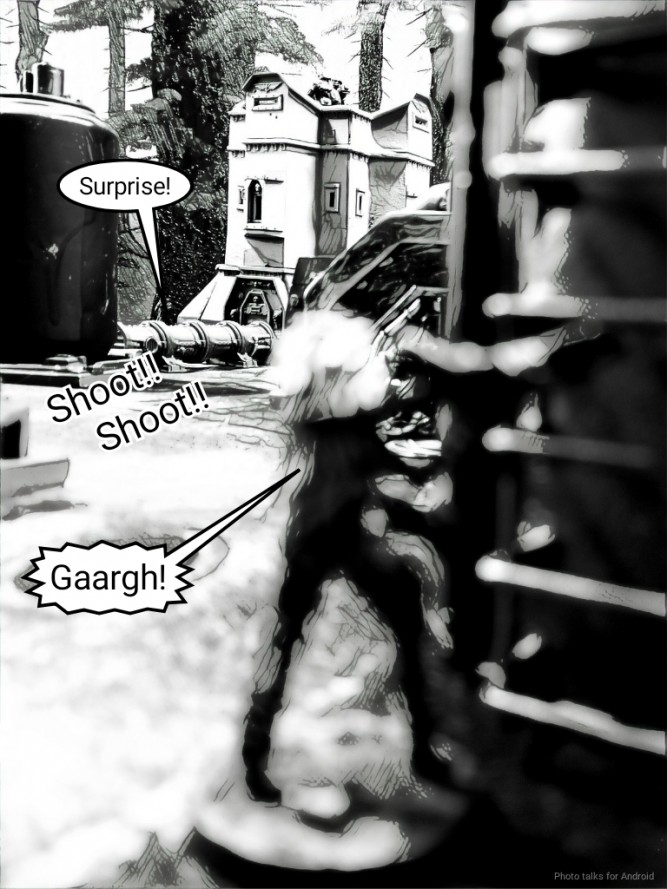 In one more volley the Sukeul was put out of the fight. The Zulu Cobra maneuvered itself over to see the Krakot. The Morat must have thought itself better hidden than it was because I have never seen a Morat more surprised as it tried to duck for cover. It managed to dodge the first burs, but it was unable to get into a better position before the second brought it down. 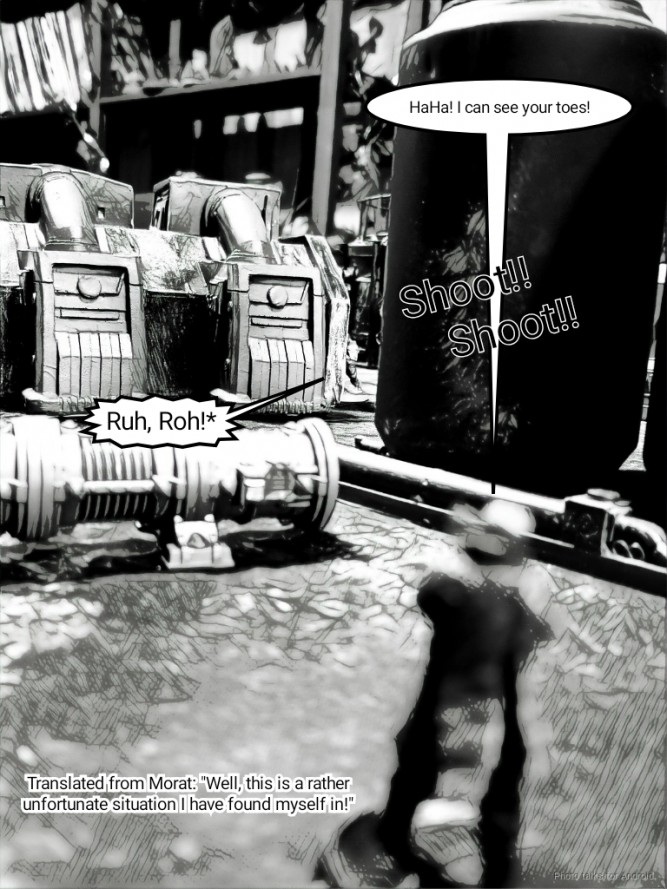 With no optimal targets within range, the Spitfire Zulu tucked itself away behind some cooling tanks, and its sensor counterpart moved into position behind a long exhaust port to provide it with Jammer cover. Patsy moved up with her HMG escort to activate the heating control unit on the right flank before moving to turn on the unit in the middle. This one proved to be a bit more difficult to activate, and the Liberto, likely wishing to avail its peoples plight by striking a blow at one of Varuna's well know operatives, took this opportunity to attack, goading the Clipsos into the same course of action. This turned out to be a poor choice for the Liberto to make, as Patsy trained her sights on the Liberto, killing him, as the Clipsos' shots missed their target. 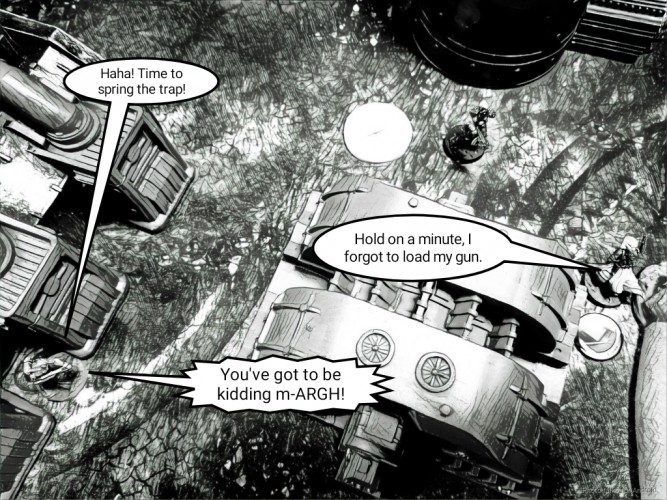 Retreating from the engagement, Patsy fired at the Clipsos whose camouflage proved to be no hindrance to her aim. 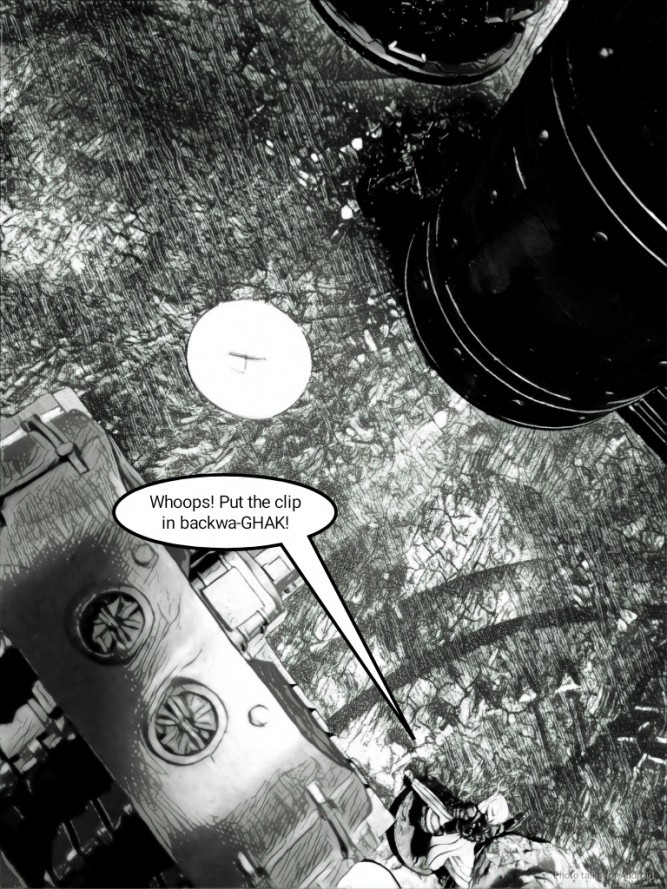 With several of our operative already down, the Kumotail moved to for up with the survivors of the Sukeul's Triad. As she rushed towards the downed Morat, the Makaul threw his smoke to obscure the Zulu Cobras' sight should he need to engage them in combat. 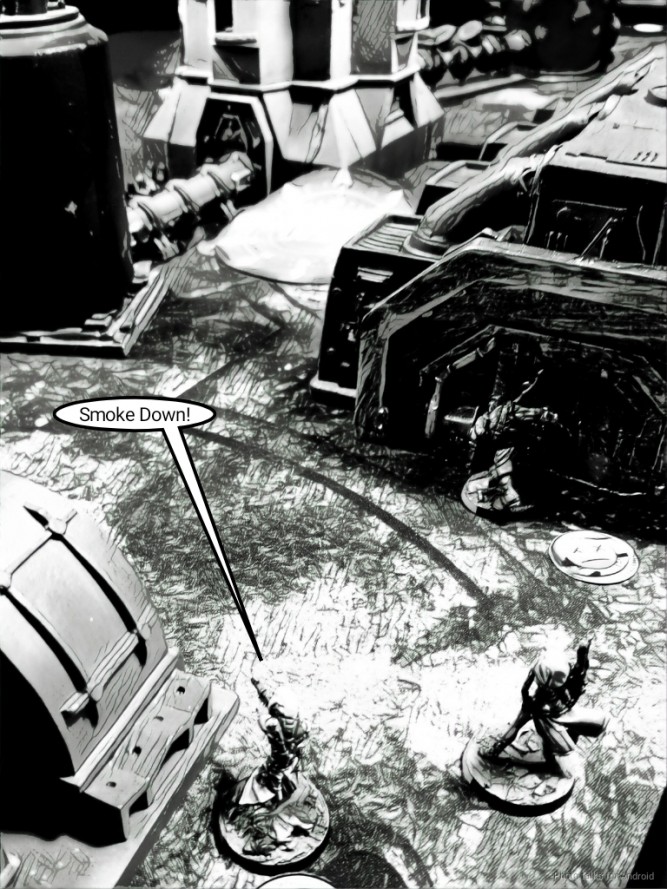 The Kumotail administered aid to get the Krakot back on its feet. 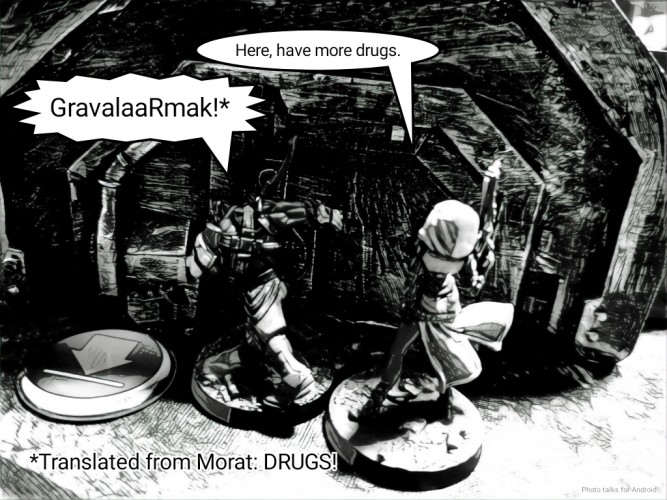 The Krakot rushed towards the Zulu Cobras' position. Seeing it coming they dodged as it made an addled attempt to throw a grenade at the Spitfire that had wounded it. 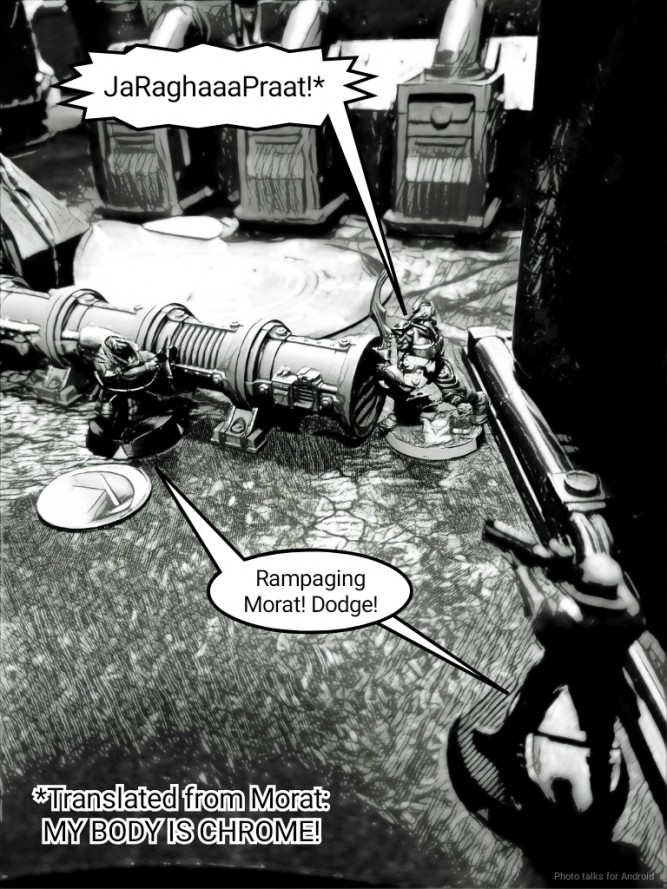 Undeterred, the Krakot jumped onto the Jammer operator as he and Spitifire dodged, fearing the Krakot's Chain Rifles. In a berserk frenzy the Krakot nearly cleaved the Zulu Cobra in half. 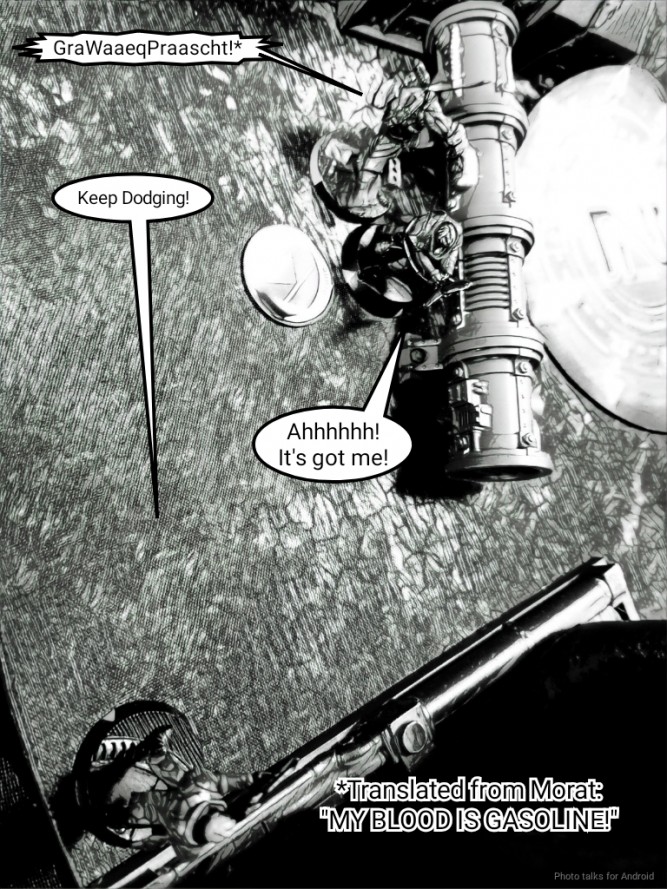 With the Jammer down, the Keil-San rushed to secure the flank the Sukeul's death had left open. Moving at a speed well beyond I what I would have expected the Kiel-San burst forth from cover, and the Helot Militiaman relieved itself to shoot with its Red Fury. The Keil-San returned fire, but the Militiaman proved to be too difficult a target and the Kiel-San's 'mate perished from the stress of reinvigorating his 'armor. Ducking out of the Helot's sight, the Kiel-San continued towards its target. Rounding the corner it gunned down the Zulu Cobra with a burst from its Red Fury. 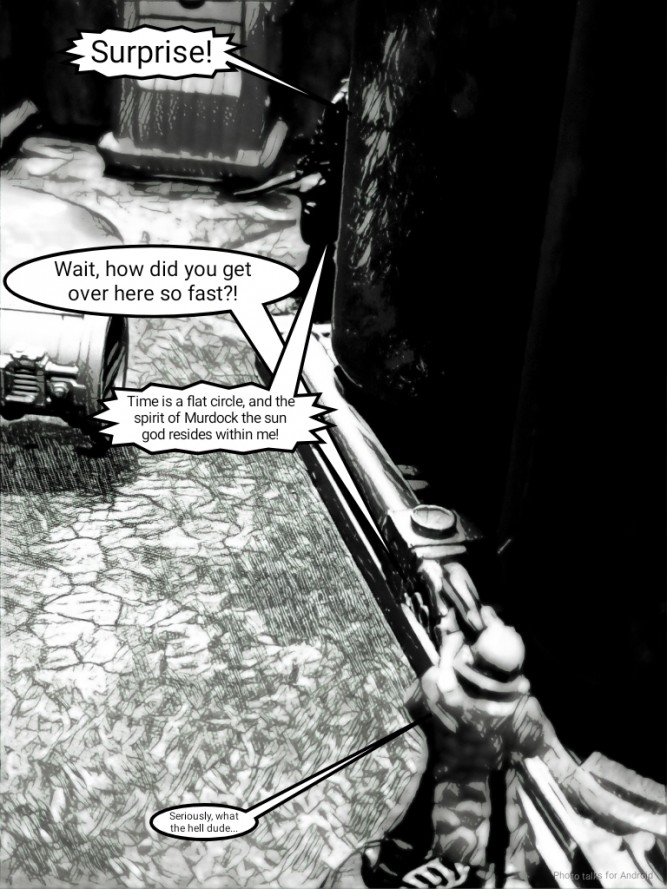 Running low on ammunition the Keil-San lept over the exhaust pipe in a vainglorious attempt to take shoot Patsy who was out of cover. Although he scored a hit, her armor proved to be more than enough to hold. 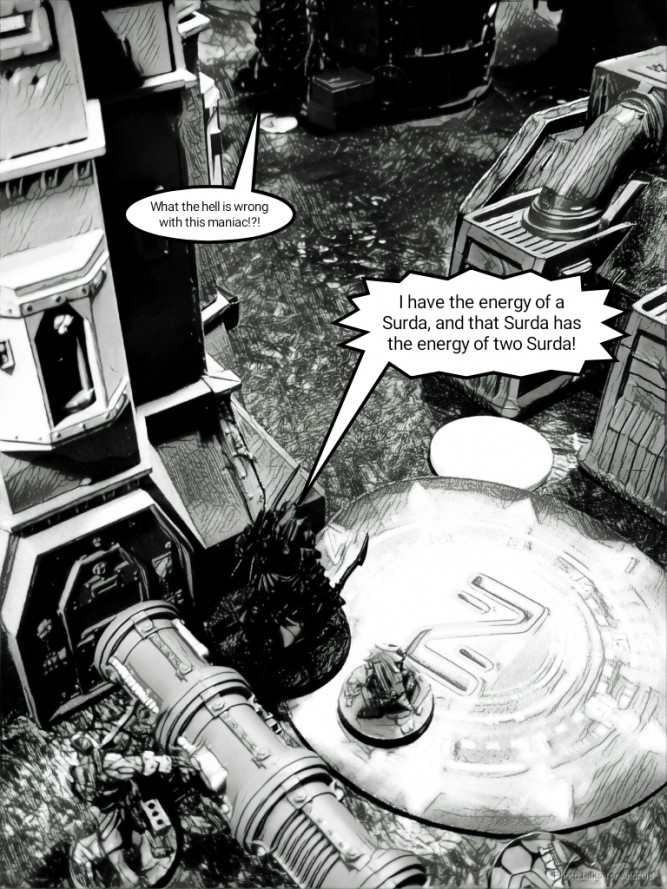 As the Makaul's smoke cleared, the Kamau locked onto the Keil-San and shot. Two high impact rounds smashed into the Kiel-San, but its massive frame, bolstered by whatever cocktail it was on, barely registered the hits, and the Keil-San ducked prone to avoid further shots from that angle. 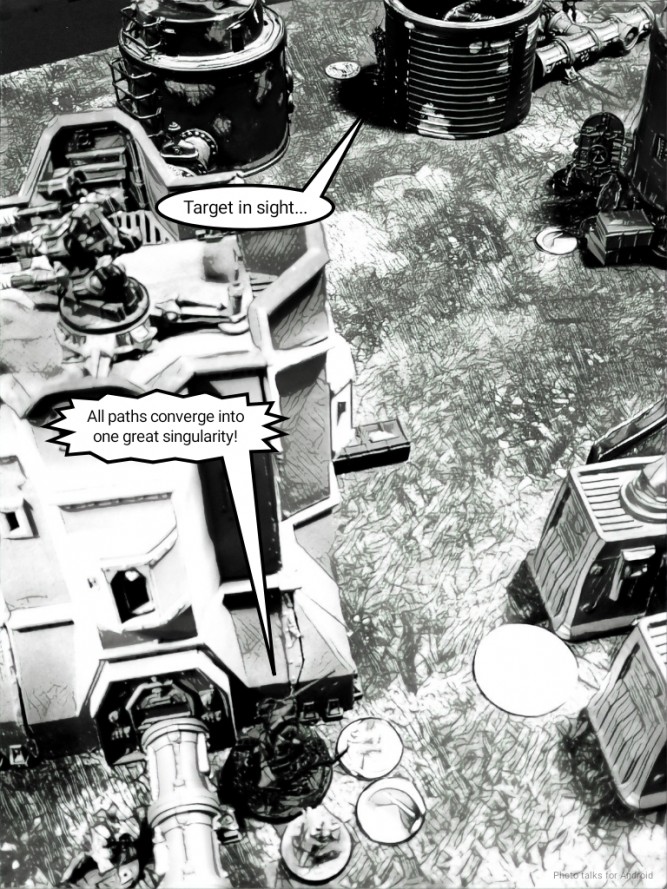 Wishing to put an end to the Kiel-San in short order, the Kamau HMG moved from his place of relative safety, to engage the Kiel-San. The Keil-San with preternatural aim, blew apart the Kamau with a shot from its panzerfaust. 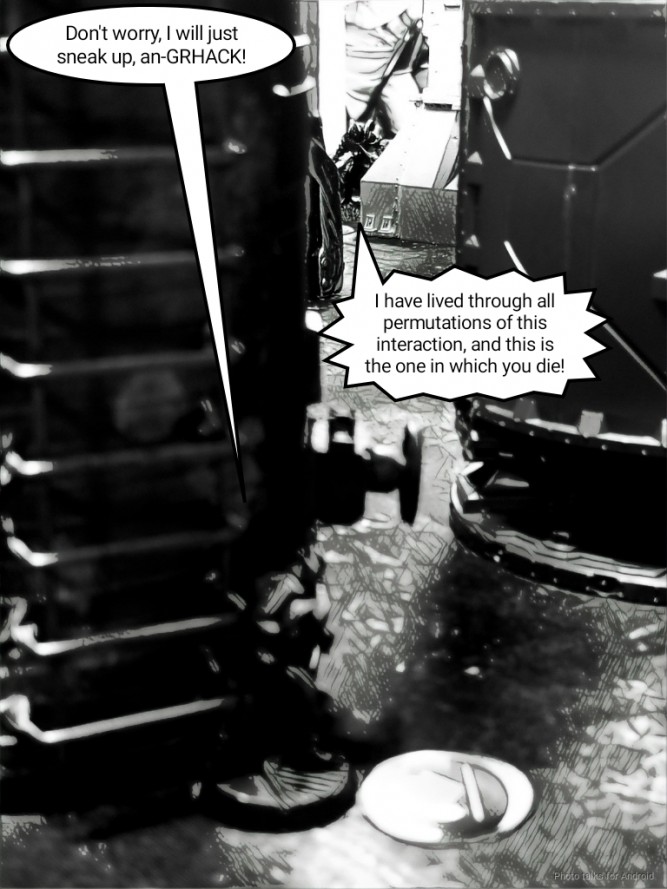 Rushing the get a better angle, the Kamau Sniper shot at the Keil-San, landing three hits which he shrugged off without injury. She shot again, and Keil-San dodged out of the way. 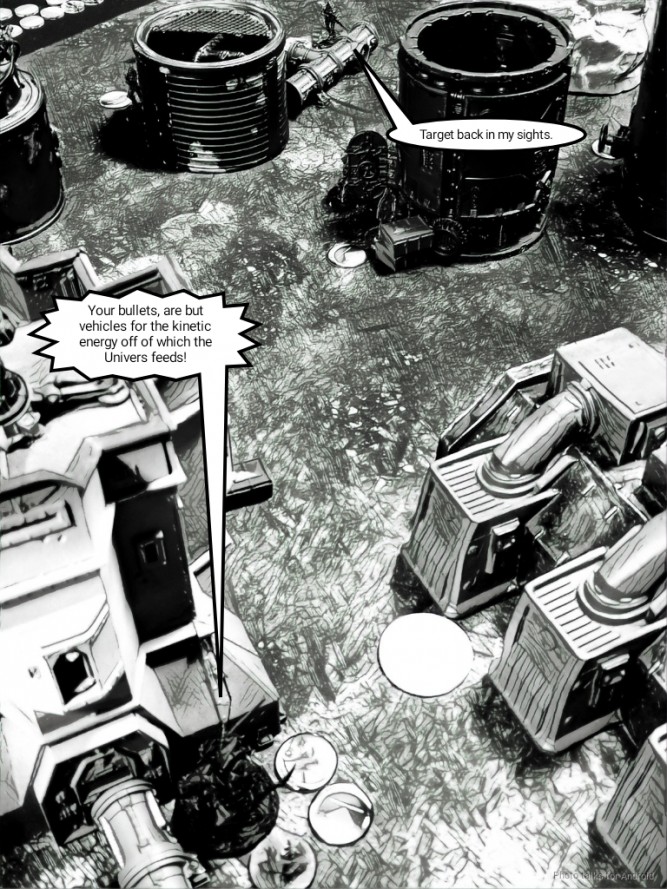 The last unknown operative moved into position to kill the Krakot, for good this time. 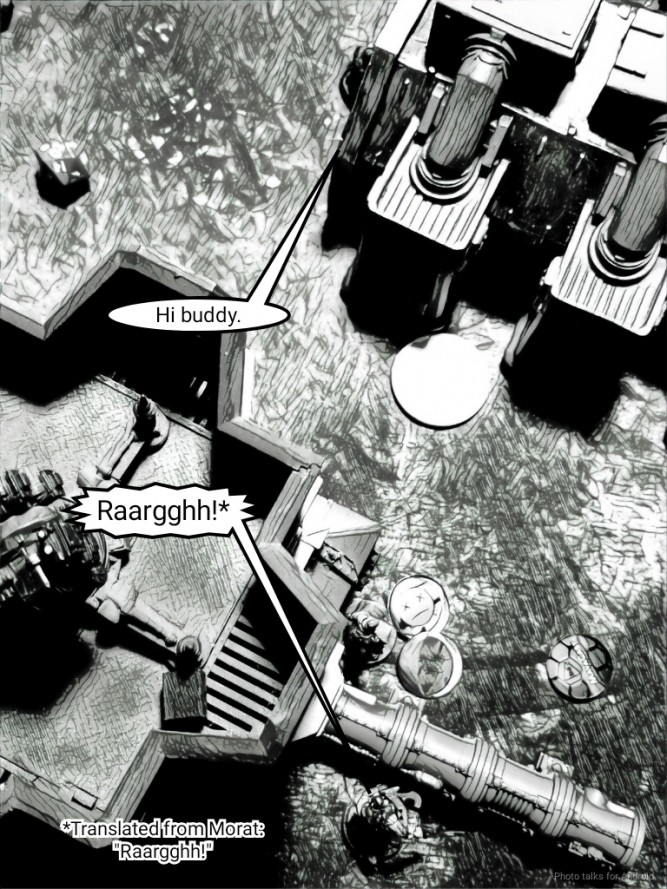 The Zulu Cobra then moved up to make sure the Kumotail would be unable to bring the Kiel-San back up. With the most prominent threats neutralized, Patsy moved up to turn on another of the heating units before falling back behind cover.

Seeing that my best chance to help in this battle I infiltrated out of sight of any of the Varuna operatives. 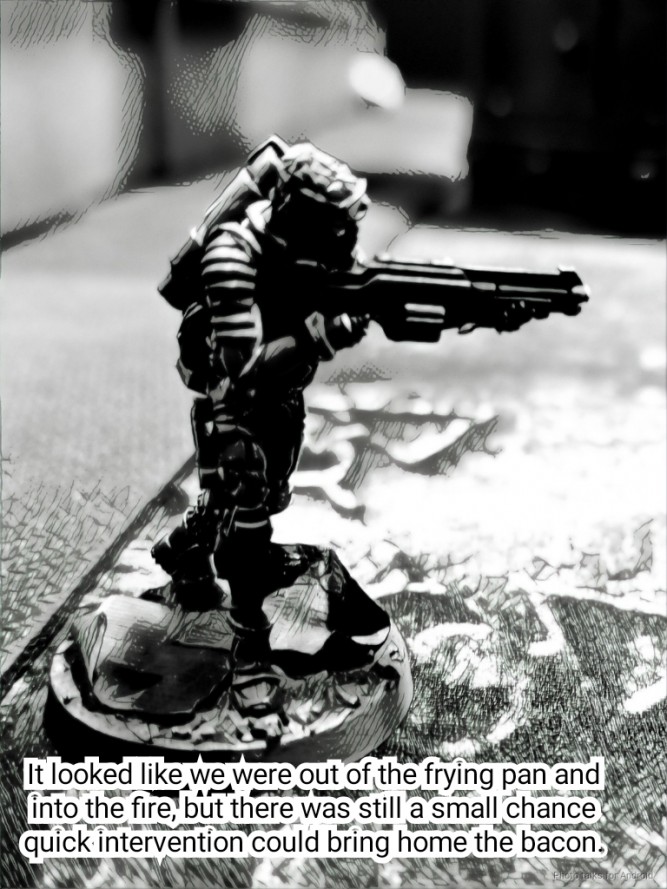 After immobilizing Patsy with a shot in the back, I began firing on her with armor piercing rounds. 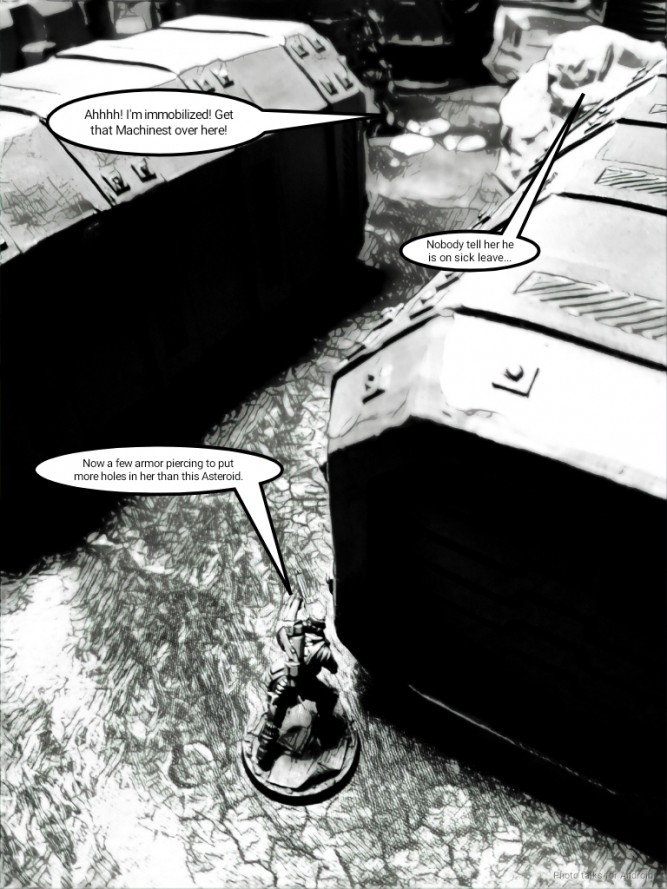 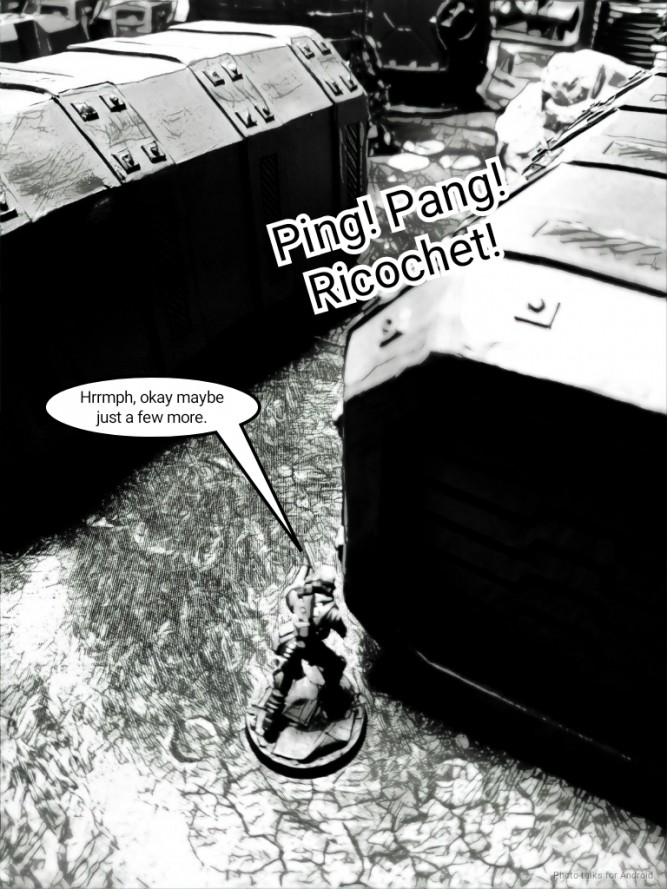 And kept firing until the job was done. 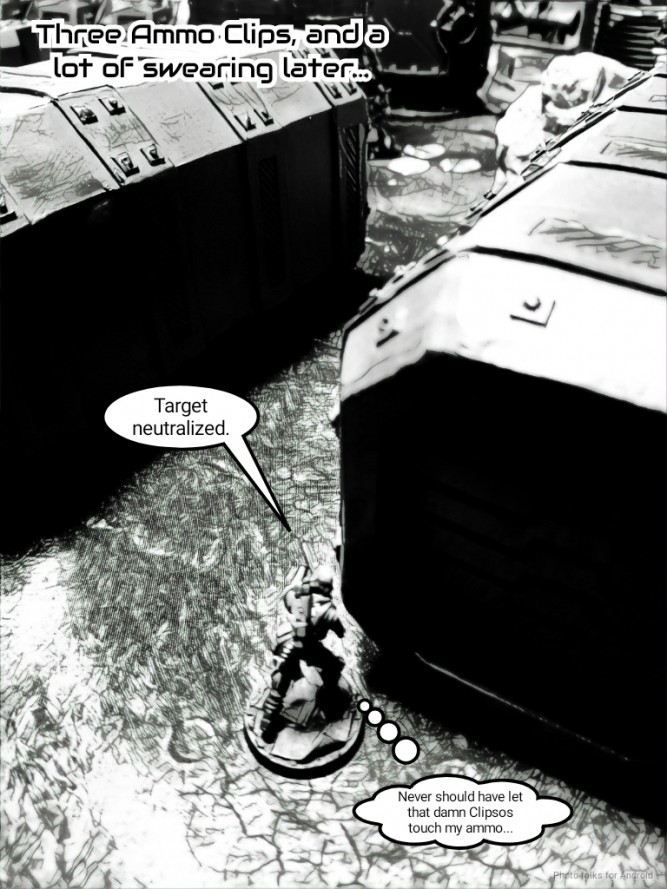 Looking to position itself better, the Kamael lead her triad into position behind a large outcrop.

The Kamau came as expected and killed me with its pistol. I heard it then proceeded to kill the Kamael Lieutenant, and the Kamael WHD. From what I gather this was planned. With these threats downed. The Varuna operatives moved closer to the heating units.

And this left it open for the Kealtar to take command of the situation and attempt a daring rescue. 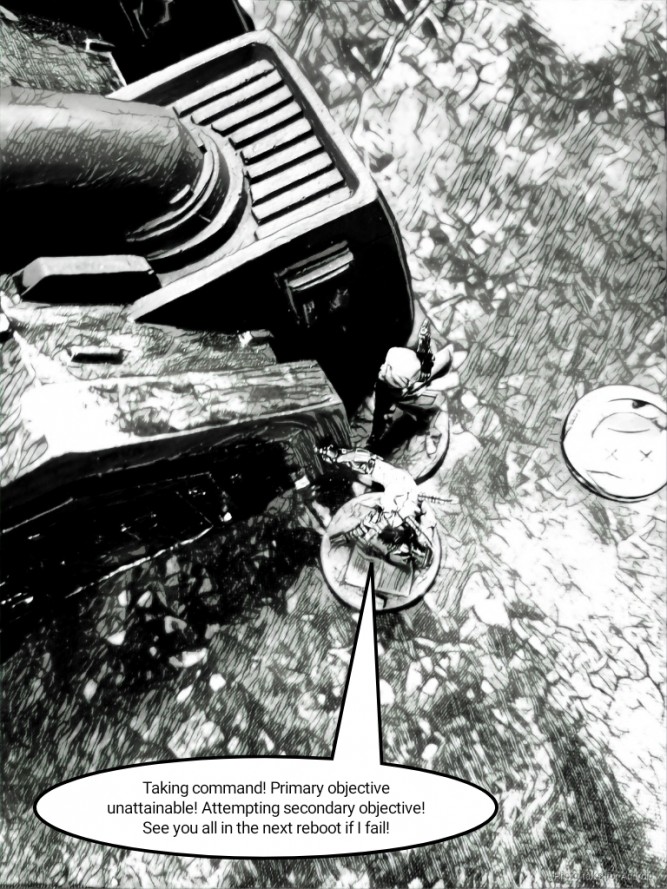 Although he fumbled with the controls at first he was able to turn on one of the heaters, so our Chaksa recovery team would not freeze.

I hear he even made it into the heated area Varuna was occupying before our team lost contact with him. 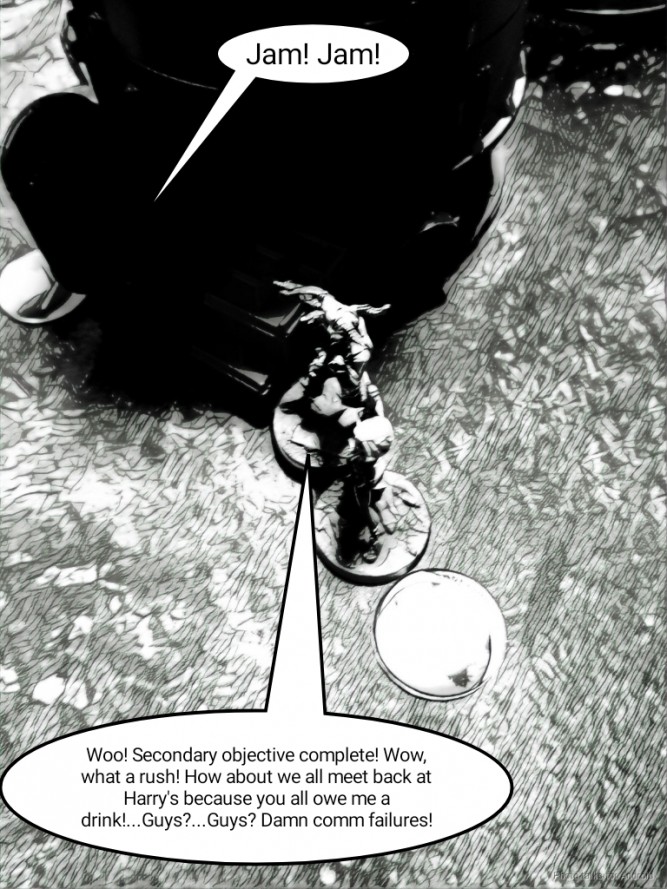