Zheng Ren’s team had orders to guard a section of urban territory in the periphery of the Jiyuan Quarry and defend it at all costs from any and all hostile forces. Glory to Yu Jing and glory to the Emperor!

Notes: Sorry for the mostly unpainted models. We also proxied a few models. Proxies are listed below. Also, Ramah Taskforce player Holyhippie unfortunately forgot his models, hence why all of his models are proxies. Lastly, the middle console/crate was treated as a saturation zone (on top of a fountain).

Afterwards, Zhencha Ha Rui took the initiative and climbed up behind Tarik Mansuri and shot him twice at point blank range with a boarding shotgun, surprising and killing the Haqqislamite lieutenant and datatracker.

Lastly, Zuyong Invincible Riyu Qin moved to cover behind a small stack of crates, keeping an eye on the enemies in the building diagonally across.

The Haqqislamite fireteam then attempted to utilize the console for heating a zone of the area of operations, but failed.

Zhencha Ha Rui then proceeded to utilize the console he was in cover behind to heat the deployment zone of the Yu Jing forces, after which Ha Rui advanced closer to the Haqqislamite fireteam while staying in cover.

Following this, Zhencha Ha Rui peeks from cover and attempts to shoot the grouped up Ghulams in the fireteam with a boarding shotgun, succeeding in killing all but the Ghulam doctor and foward observer, who were still hit and fell unconscious. The enemy Ghulam with a rocket launcher and the Khawarij lieutenant attempted return fire with a pistol and light shotgun respectively, but were unsuccessful.

The enemy lieutenant surrendered and was taken captive with the remaining unconscious Haqqislam forces left to die of exposure and the unconscious Riyu Qin, Mengda and Luxie recovered for immediate treatment. Unfortunately, Zhaoying was beyond help and we mourn her loss greatly.

NB:
Apparently the signs from Palpatine Lobbying Inc. shown in the attached pictures proved to be a great help in forcing the enemy into predictable firelanes. That, and the investment in the local area under our influence clearly shows. Perhaps they can be relied upon for different means? Can they sponsor us? (Is that even possible?)

This ends my report. 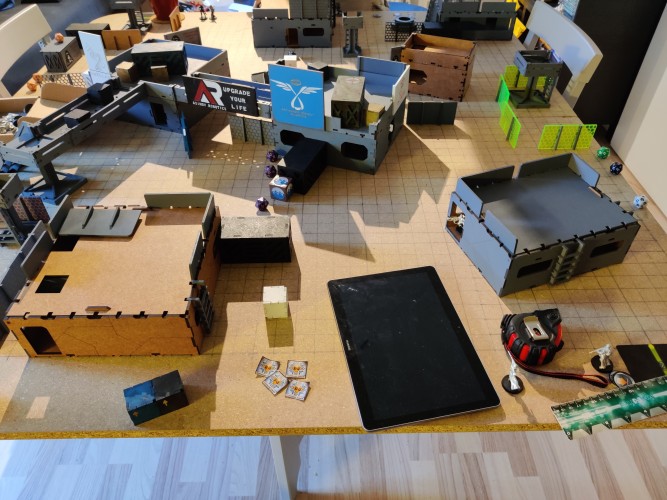 The Haqqislam deployment zone given to them by the Yu Jing commander who chose deployment in the initial roll (that YJ won). 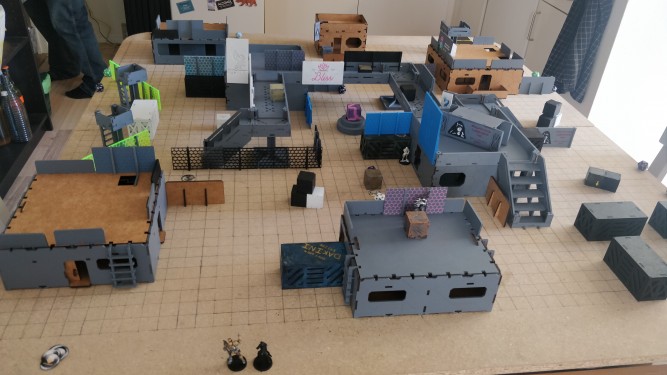 The Yu Jing deployment chosen by the Yu Jing commander. 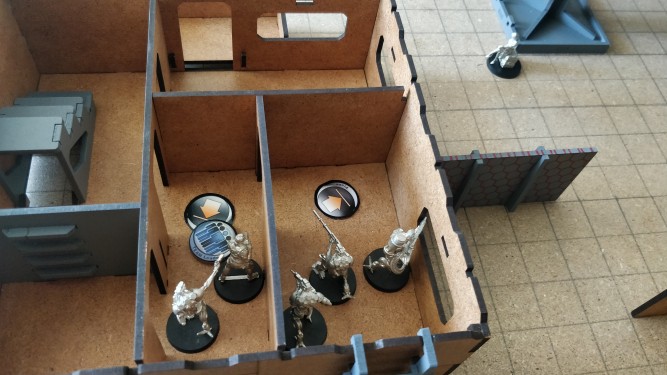 Haqqislam were made to deploy first. Here is the Ghulam fireteam with a Khawarij with Chain of Command on the right side of the Haqqislam deployment zone. 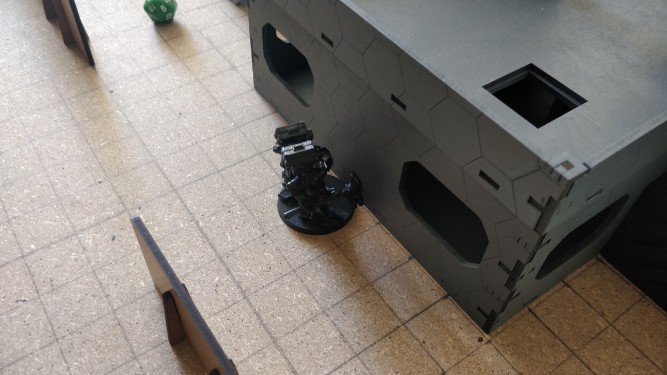 Haqqislam deployed Tarik Mansuri in the middle of their deployment zone, behind a building. Note that Tarik is the Haqqislam datatracker. 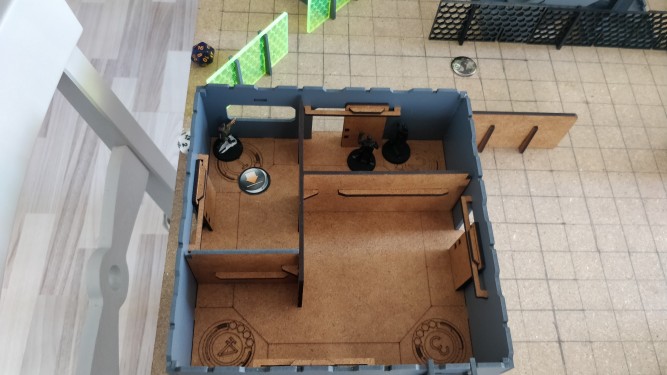 On the left side of the board in Yu Jing's deployment zone, the Yu Jing commander deployed a Fireteam: Core of three Zhanshi with the Zhanshi lieutenant at the window and the two Zhanshi paramedics behind the door and wall. The Zhanshi paramedic in the corner is the YJ datatracker. The Yu Jing commander also deployed a Zhencha (camo token) near the stairs.) 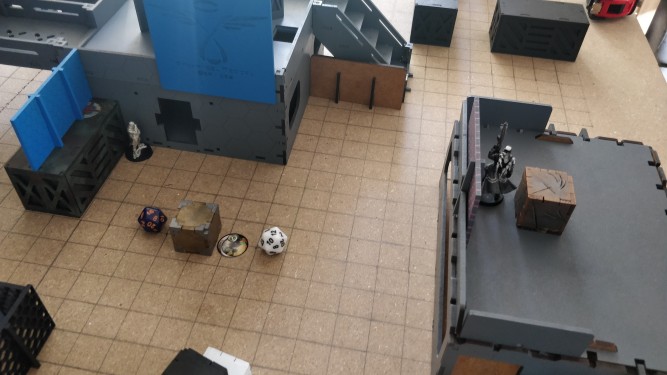 In the middle, the Yu Jing commander deployed a Zhencha (the camo token. This one is Ha Rui) behind the forward most heater on the YJ half of the board and the Zuyong Invincible with a HMG behind full cover on top of the building. 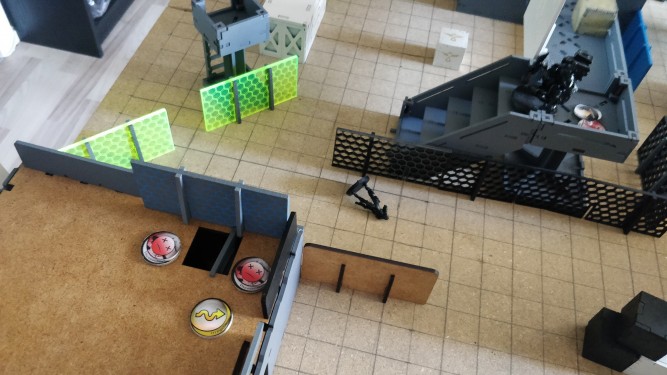 Haqqislam's first turn. Tarik moves up and provokes fire from the Zhanshi paramedic at the door (Mengda) and the Zhencha (Zhaoying) with Tarik getting wounded once and Zhencha Zhaoying getting wounded as well. Tarik then proceeds to lob three grenades at the two zhanshi paramedics and downed both, but killed neither. Tarik then lobs a last grenade at the Zhencha and kills it outright. Tarik then goes prone and moves up the stairs to the walkway. 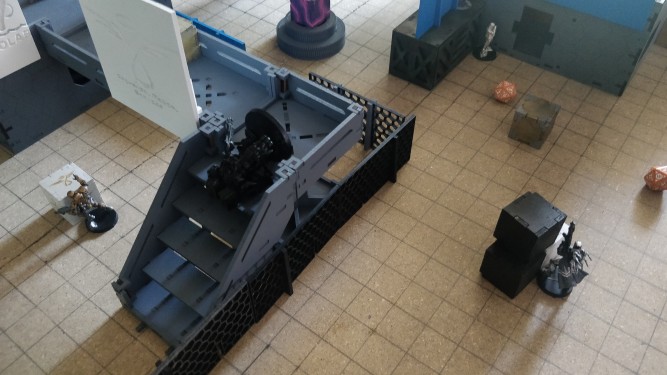 Yu Jing turn 1. The Yu Jing commander utilizes a coordinated order to move the remaining Zhencha closer to Tarik and the Zuyong on top of the shipping container next to his building. The Haqqislam commander has made the crucial error of declaring Tarik's facing to be directly towards the left side of the board, so the Yu Jing commander capitalizes on this and uses his next order on the Zhencha, moving it up behind Tarik still undiscovered and surprise shots Tarik twice at point blank range, hitting with both and killing him outright. With the last regular order, the Yu Jing commander moves the remaining Zhencha to the nearest console and uses the Zuyong's irregular order to move him to cover, peeking towards the Haqqislam fireteam. 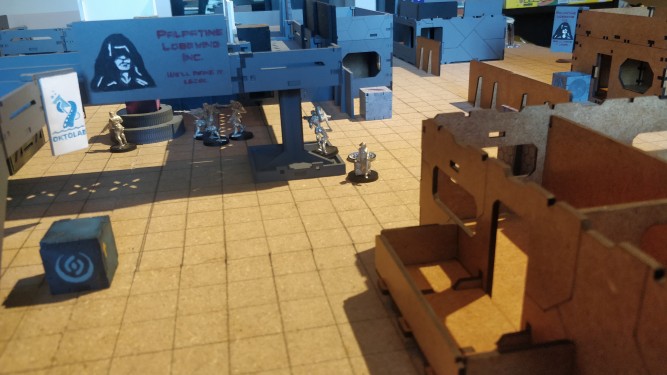 Haqqislam turn 2. The Haqqislam commander proceeds to peek out from the building with the Ghulam carrying a rocket launcher, wounding the Zuyong. The Zuyong attempts returning fire, but fails. The Zuyong ducks into full cover, and the Haqqislam fireteam moves up towards the center. 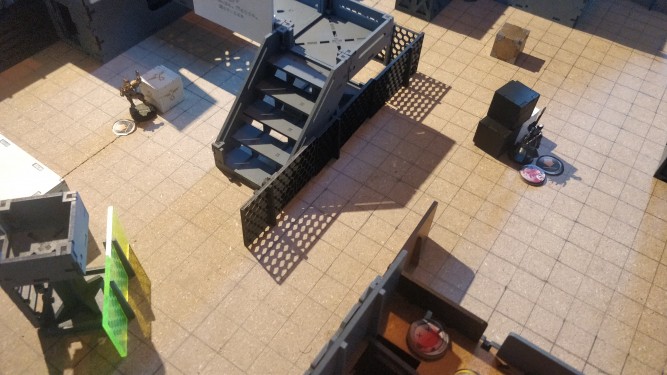 Haqqislam turn 2. The Yu Jing positions by the end of the turn, with the wounded Zuyong. 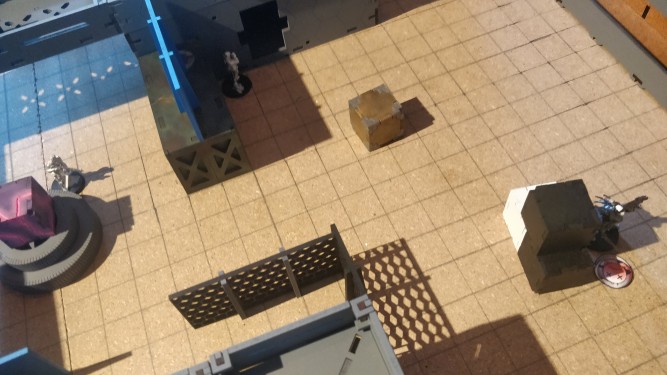 Yu Jing turn 2. The Zuyong peeks and attempts to shoot at the new enemy lieutenant (the Khawarij) twice, but only succeeds in getting some return fire in the face and ending up unconscious. 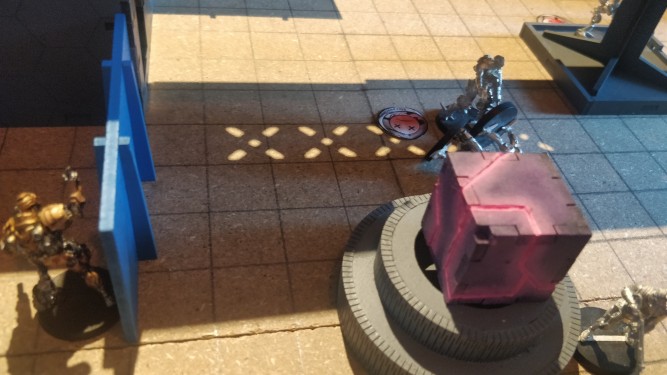 Yu Jing turn 2. After successfully hacking the console and heating the YJ deployment zone, the Zhencha uses it's remaining movement to move closer to the enemy fireteam, though in cover. Seeing the opportunity that presented itself with the Haqqislam commander bunching up the majority of his fireteam, the Yu Jing commander decides that desperate measures are required. The Zhencha peeks and blasts all but the lieutenant with a template from his boarding shotgun twice, and since the Haqqislam commander chooses to shoot, they cannot dodge. The Ghulam carrying a rocket launcher shoots back with a pistol, but the Zhencha rolls better and beats it. The Khawarij lieutenant hits with a light shotgun, but the Zhencha's armour takes it. All the Ghulams except the forward observer and the doctor are killed, and those two Ghulams that didn't die are unconscious. 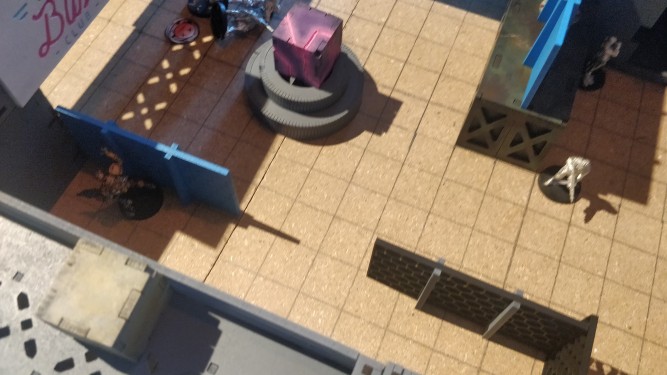 Haqqislam turn 3. Desperate to deny the win to Yu Jing, the Haqqislam commander realizes that if he kills the Zhencha and gets a zone heated as well as gets in that zone, he wins. He then uses his first order to attempt to hack the heater in front of the YJ deployment zone and succeeds. He then combat jumps his Khawarij Lieutenant (last remaining unit) and shoots at the Zhencha, who survives and moves into full cover. The Khawarij now is close enough to secure the YJ HVT and does so. 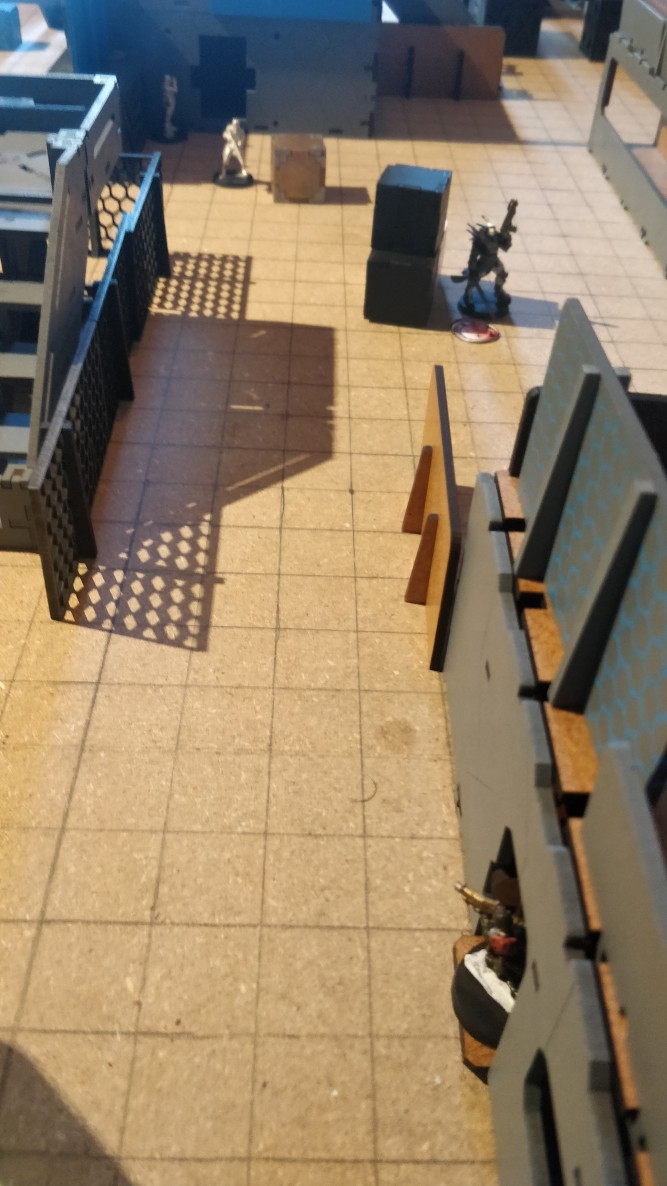 Yu Jing turn 3. Realizing that he has won even if he lost his lieutenant, the Yu Jing commander opts to use all his orders in an attempt to shoot the Khawarij and fails all the shots, either because they do not hit or because the Khawarij dodges, and the Khawarij thus moves to cover. With this, the game is over and Yu Jing wins with 6-4 as the Yu Jing killed more points (3), activated a heater (1), killed the enemy datatracker (2) whilst Haqqislam killed the enemy datatracker (2), activated a heater (1) and secured the HVT (1).