One for the Road

With conflicts wrapping up on Novvy Bangkok, Yu Jing attempts to regain their honor by challenging Aleph to one last training exercise. This one themed in the depths of a frigate. Given the artificially disrupted communications, Shakti and her expert Yadus are called in to lead the operation.

Notes: Sorry for the unpainted models. We also proxied a few models. Proxies are listed below.

Narrative to be added later. 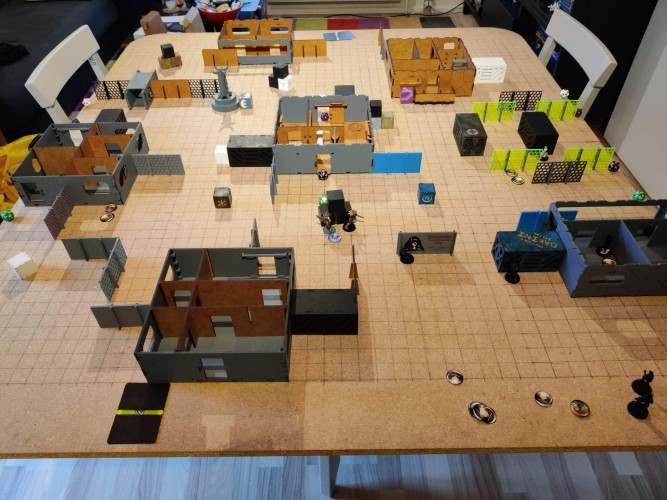 Map and Preparation: As we were playing on Engineering Deck, which is assumed to be a floor of a ship, we arranged the buildings so it would all be on one level, with some clearings. This side is Yu Jing's deployment zone. 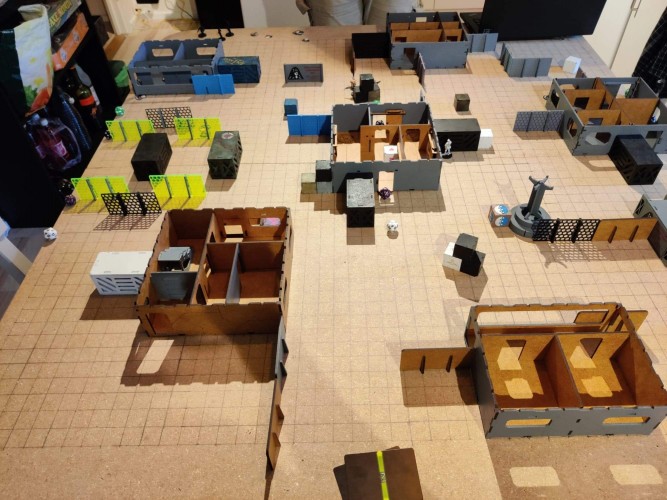 Initiative and Deployment: Yu Jing won initiative and elected to go first. Aleph selected this side of the table to deploy. 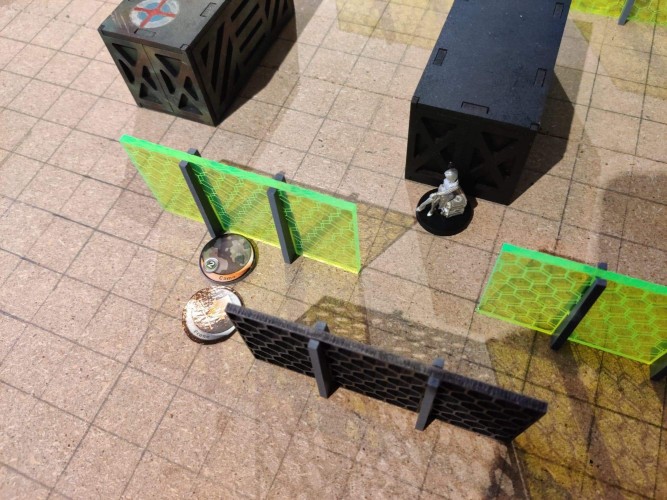 Yu Jing Deployment: Starting deployment, the Yu Jing commander deployed their HVT behind some shipping containers on the right flank, protected by a Daoying Hacker (Not the lieutenant.) 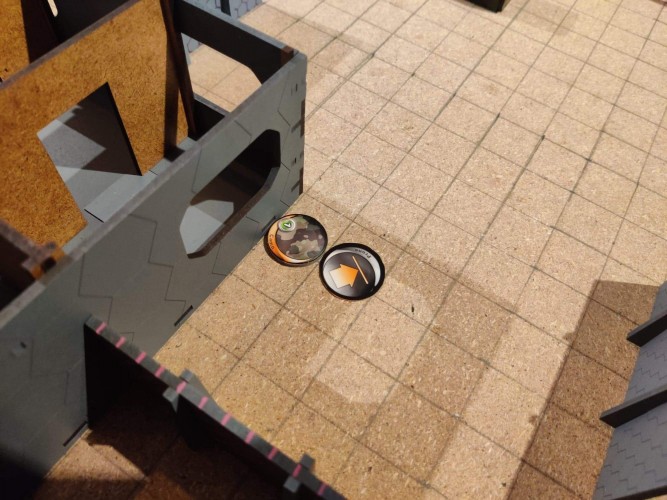 On the extreme other side of the table, on Yu Jing's left flank, the second Daoying Hacker (Lieutenant) was deployed. 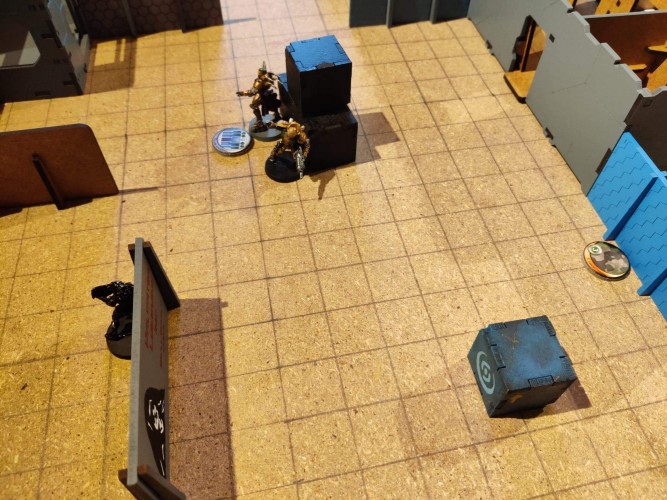 In the center of their deployment zone, Yu Jing deployed a Zuyong Haris, with HMG (Team Leader) and TinBot Zuyong behind some crates next to the Engineering Deck. In addition, Tai Sheng is deployed behind a wall. In addition, a Zhencha Forward Observer (and Liaison Officer) with Boarding Shotgun is deployed behind a blue wall connected to the Engineering deck. 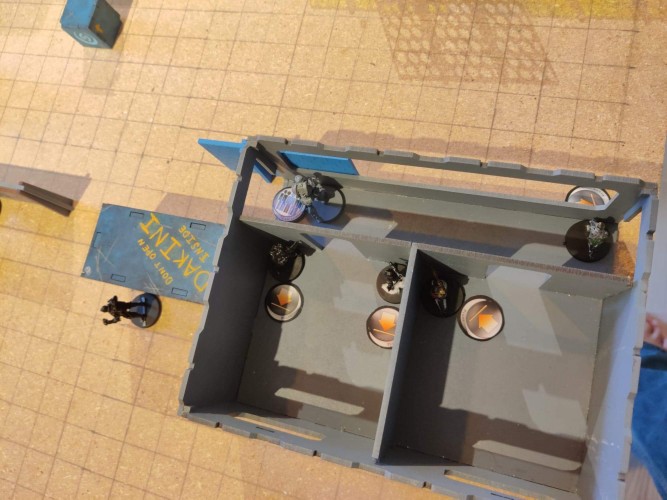 Inside a building on the right flank, the remainder of the Yu Jing forces are deployed. A Mech Engineer is behind a shipping container, ready to support either group. In addition, a Haidao sniper (Team Leader) leads a core of Zhanshi, who are hiding in the building. 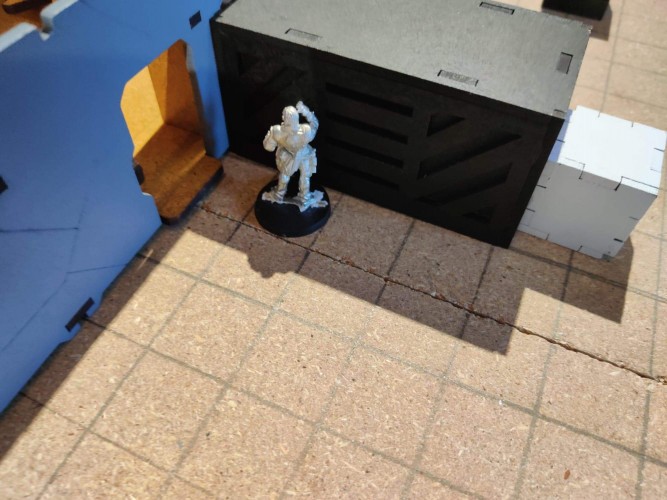 Aleph Deployment: The Aleph commander begins by deploying their HVT next to the Engineering Deck, behind a shipping container. 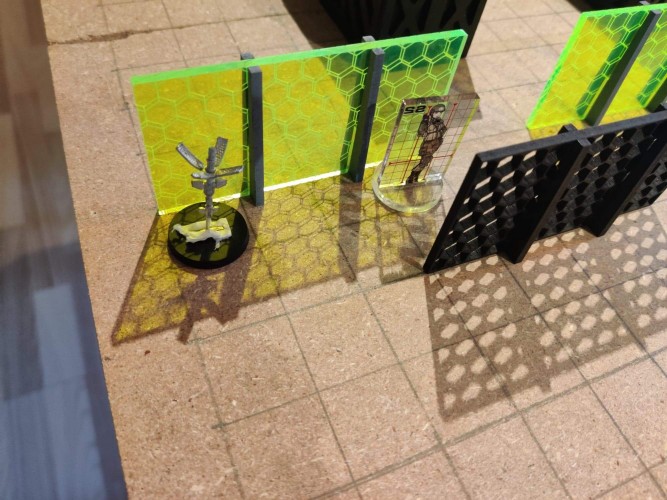 On Aleph's left flank, a Netrod is deployed with Dart behind some green force fields. 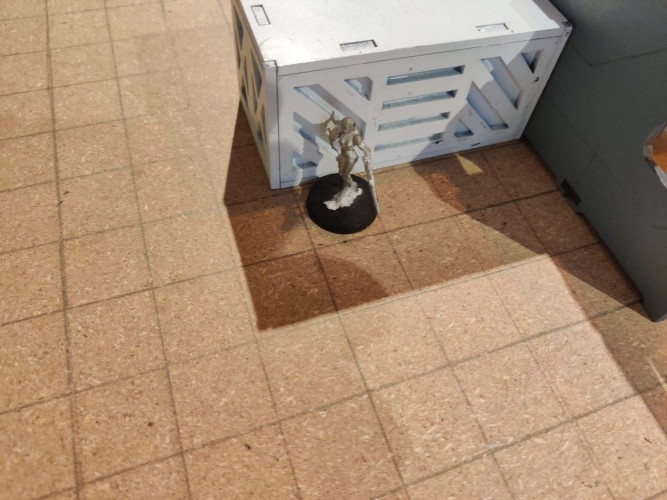 Behind Dart and the Netrod, an Apsara is deployed, hiding behind a shipping container. 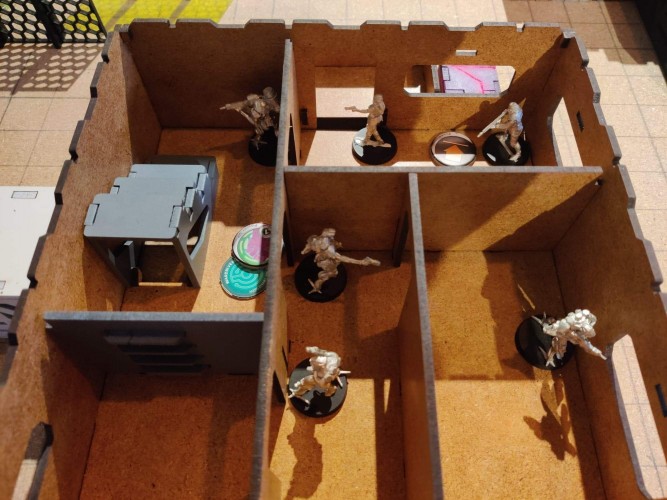 Inside the building next to the Apsara, a Dakini Core is deployed, the HMG next to the stairs, the Paramedic in the center (Team Leader and Active Proxy of the Apsara), with the LGL Dakini guarding the back of the building and the regular Dakini protecting a window on the right side. Lastly a CSU (who felt swole with +3 PH) is prone near the console, with a non-prone Warcor watching the approach to the building. 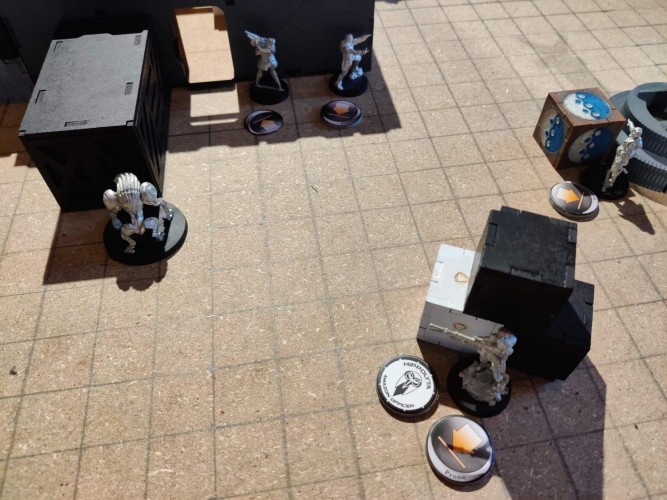 In the center of the board, Shakti, along with her Haris are deployed prone behind the Engineering Deck, ready to grab it quickly. Supporting them is a Lamedh Rebot behind a shipping container. Secretly to the left of the shipping container, a Proxy Mk. 2 Hacker is deployed. (Not pictured and never revealed.) Lastly a Proxy Mk. 5 Forward Observer is deployed prone behind a pillar. 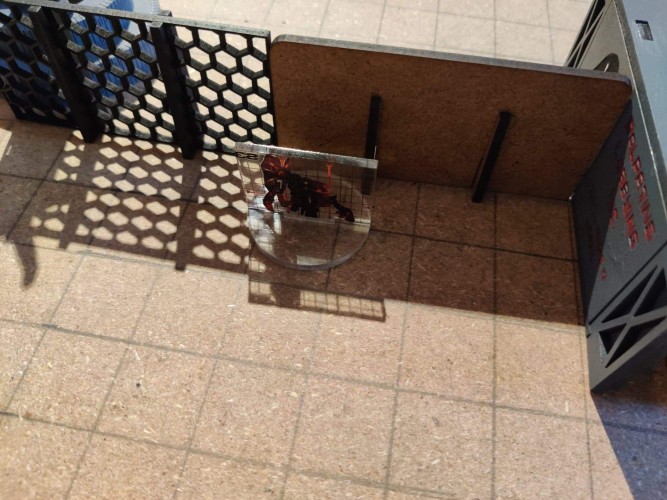 Just right of the Proxy Mk. 5 the second Lamedh Rebot is deployed, in cover, watching the objective across the way. 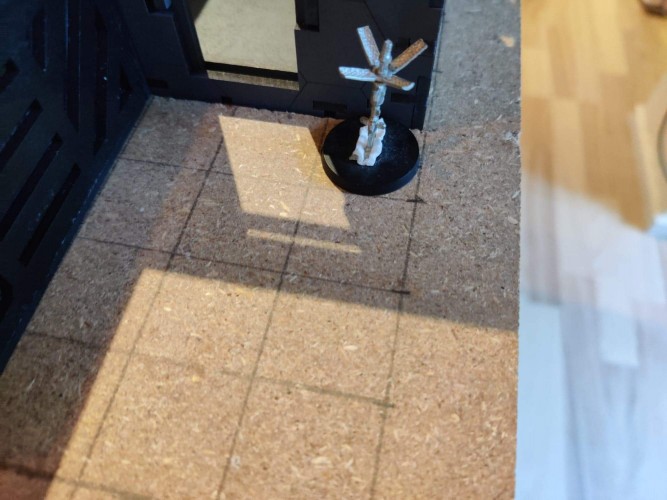 Lastly, on the extreme far right flank, a Netrod is deployed next to a building. 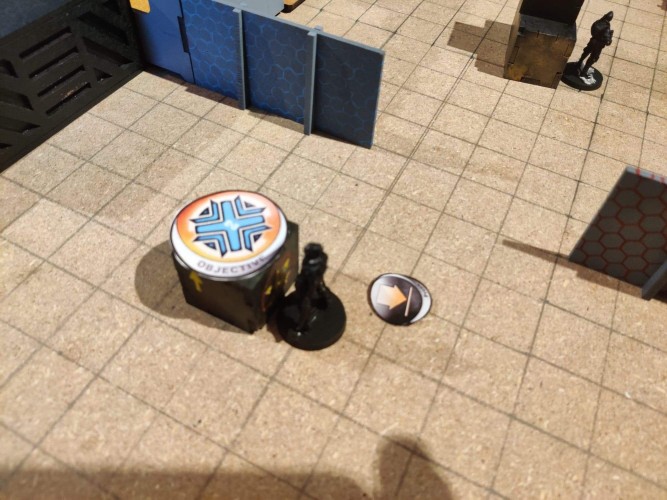 Yu Jing Turn 1: Seeing the left flank is left mostly uncovered, the Daoying Lieutenant rushes up to the console, being missed by flash pulses on the way. After a few attempts, she secures the console and hides behind it. 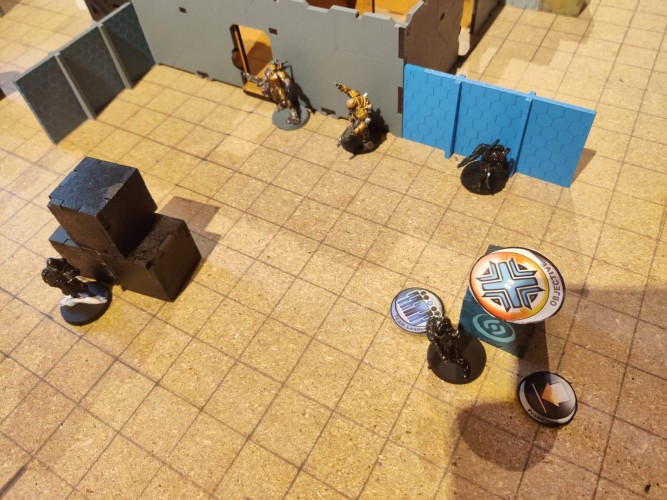 In the center of the board, the Zuyong Haris pushes up to be ready to take the room, but holding off from entering, so as to prevent isolation. As they move up, Tai sheng runs to grab the other console on the Yu Jing side. While approaching it, he is harassed with Flash Pule fire from the Warcor, an eventually gets her with his Mk12, wounding her. Lastly, the Mech Engineer, noticing those Yadu's may try to E/Marat the Haris, moves up to be ready to remove any status effects from them, hiding behind the pile of crates. 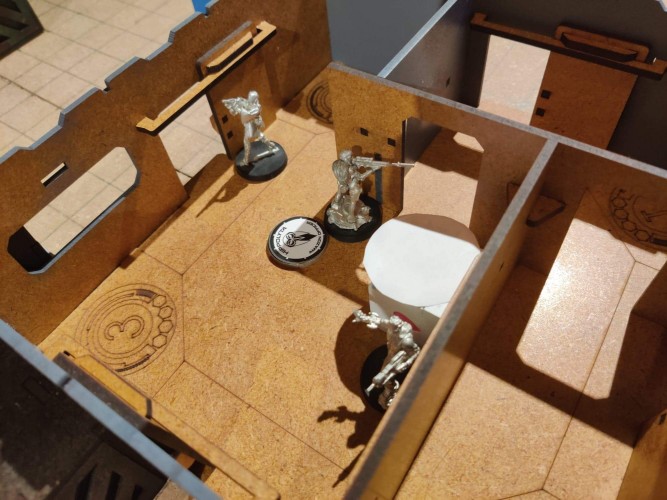 Noticing a chance to take the Engineering Deck, Shakti's team rushes into the room, tossing a pair of drop bears right next to the HMG Zuyong, before securing the Console. Shakti herself, circles around the Engineering room from the outside and kills the Daoying Lieutenant with a hack, before engaging the Zuyong HMG. Disregarding the mines, the Zuyong HMG responds with fire. The mines wound both Tai Sheng and the Tinbot Zuyong and sends the HMG Zuyong running for cover. Unable to get a good shot, Shakti rejoins her team. 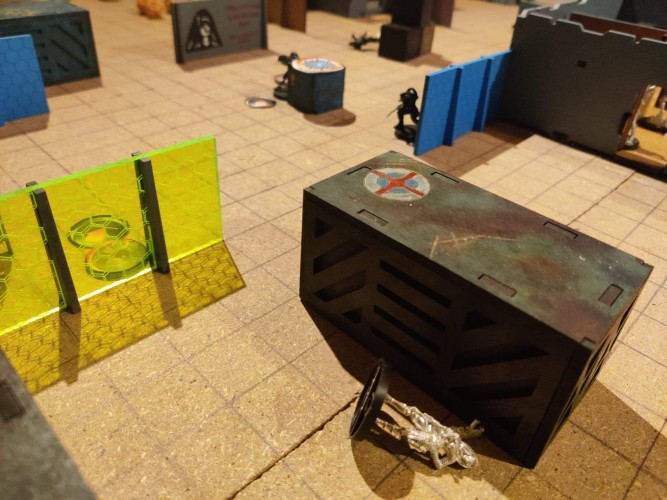 Trying to seize the opening left by Shakti's team, Dart rushes up and guns down Tai Sheng with her SMG. With him down, she follows the task up by taking on the Zhencha, only to lose the battle and ultimately die. 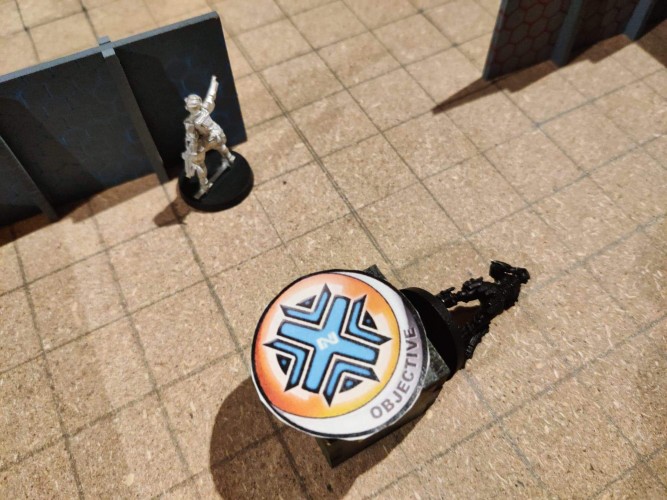 The entire left flank of the Yu Jing forces dismantled, the Proxy Mk. 5 grabs the console near it and rushes past the dead Daoying.

The Proxy Mk. 5 then proceeds to gun down the Mech Engineer and Tinbot Zuyong, and then trying to kill the HMG Zuyong, but ultimately unable to penetrate the armor. 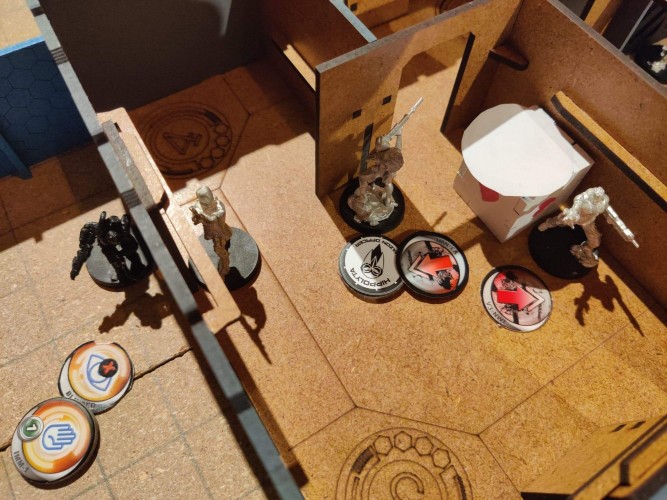 Yu Jing Turn 2: Now in Loss of Lieutenant, the Yu Jing commander converts all the Zhanshi orders to regular orders. Then trying to put the Aleph forces into retreat and possibly prevent Aleph from holding three consoles, the Zhencha flanks Shakti and her team with its shotgun, only to eat an E/Marat to the face and fail in its task. 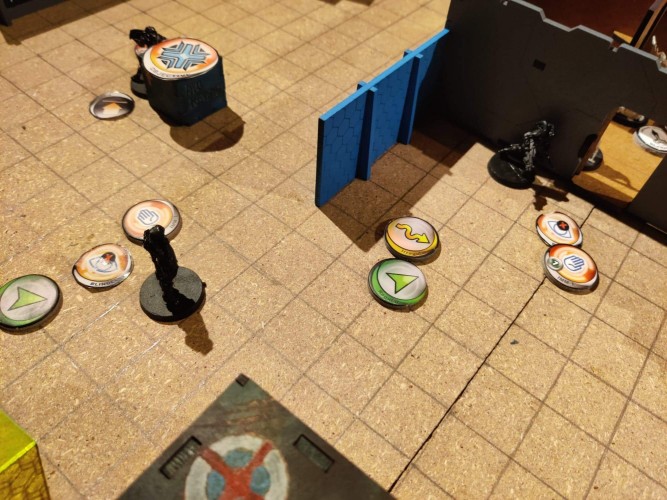 Desperate, the Daoying Hacker on the right flank, tries to rush the Engineering deck, only to also fail in killing the team and getting hit by an E/Marat as well. (Note, we initially forgot the Daoying was medium infantry and placed the IMM-1 marker, but removed it after the picture.) Turn complete, the Yu Jing Commander names the Zuyong HMG lieutenant, hoping to use the extra orders to take the Engineering Deck. 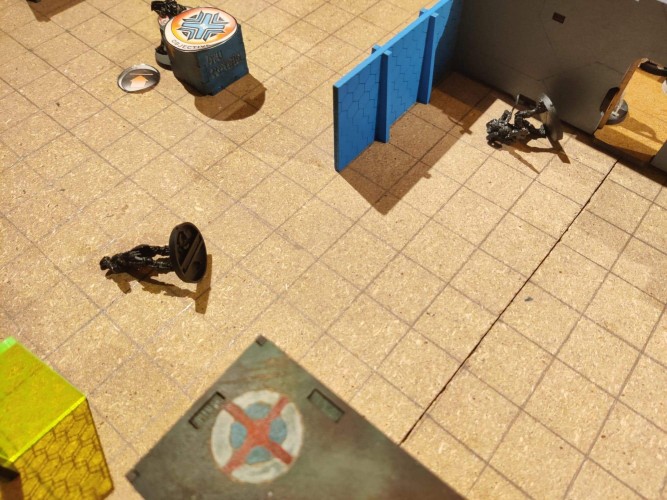 Aleph Turn 2: Aleph moves the Dakini HMG forward and guns down the second Daoying and Zhencha. 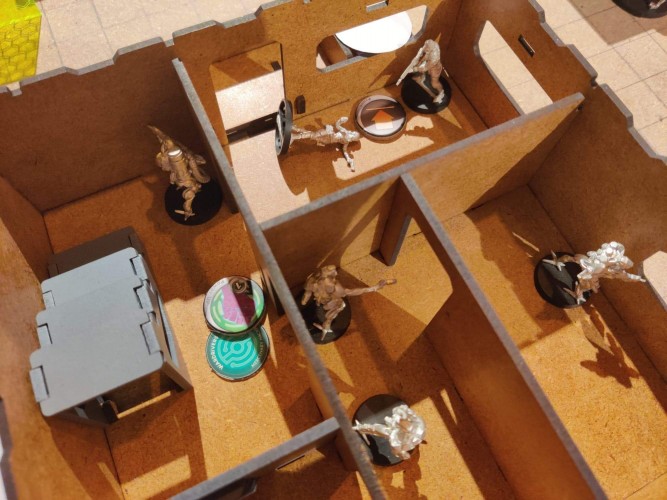 With the path cleared, the CSU captures the console it is next it. Next the Dakini Paramedic attempts to help the Warcor, but ultimately kills her instead. The team returns to their initial locations after this. 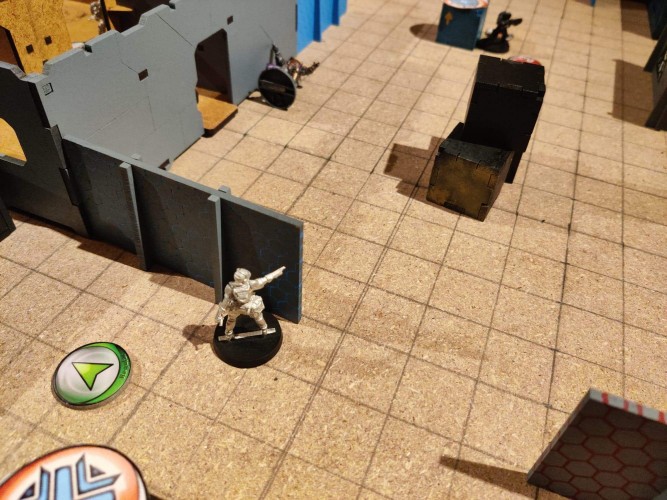 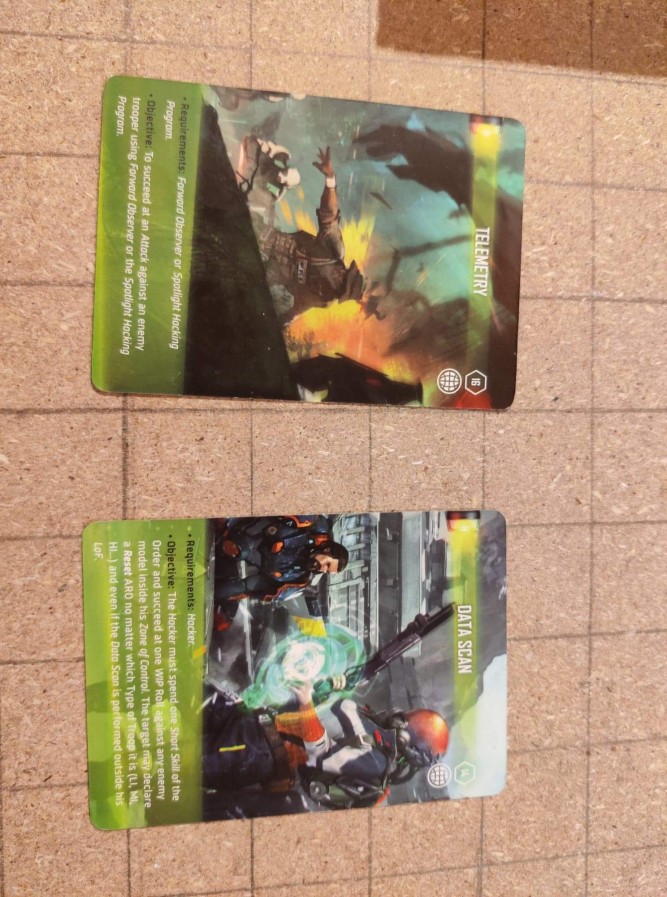 Aleph Classified Objectives: Aleph's classifieds were Telemetry and Data Scan. Both were completed.

Yu Jing again in Loss of Lieutenant and unable to convert orders or make it to any objective, summarily surrendered, ending the battle.