Capt. Ahab won't get this Orca 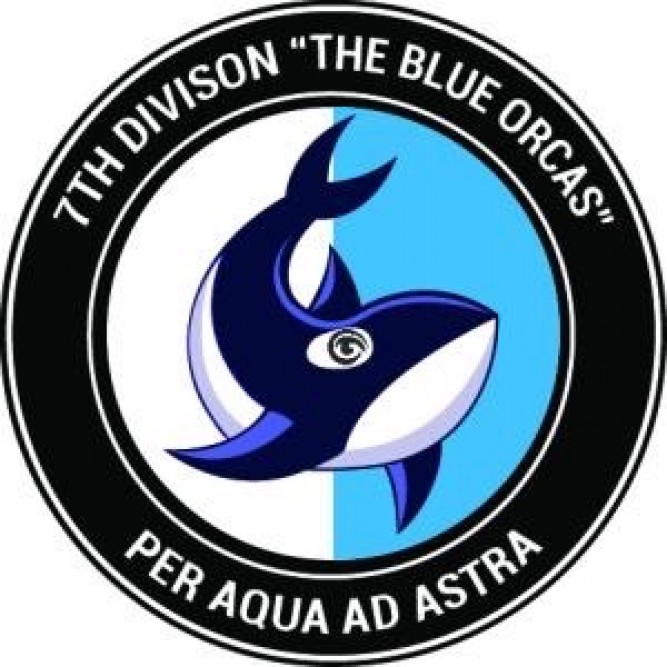 So we meet again Daijino

Stardate 0921 47NY
It was early in the morning when I spotted the of "The Wandering Bushi" the flagship of Daijino's fleet. He and I have a long history in these conflicts. The last time we met it was in Wotan when he was attempting to destroy my proto-type Squalos named Alpha. Fortunately for me while the TAG was destroyed in the final battle I was able to recover the "black box" as it were of Alpha so rebuilding was a simple process. Why he's come to seek me out is uncertain, probably to regain some sense of his "lost honor" from the last time I defeated him.

I won the initiative so I decided that I had to take down the Daiyokai haris in the back. I ran the bulleteer down his right flank. Unfortunately, the bulleteer couldn't get to the Daiyokai but killing the Missile Launcher Keisotsu was definitely a close second. After killing the Keisotsu ML the bot was in a position where it wouldn't survive long so I decided to try and take out as many as i could with a single remaining order in it's order pool. So I moved it out in the open and targeting 3 different models I hit all three but only one went down...dang blasted armor save making Keisotsu. The rest of the order I used the Zulu Cobra Marksman near the Daiyokai to try and see if the Cobra would have any better luck. He was only able to get one wound in but at least the Cobra didn't die and ended the turn in camo.

His turn he ran the Daiyokai Haris out and while the Daiyokai didn't need to worry about it, the 2 Domaru found out what a Helot w/ a Light Rocket can do as they burned to a crisp. His Ryuken 9 dropped a mine near my Marksman Cobra, effectively blocking the door near the Daiyokai so the Cobra can't shoot him. 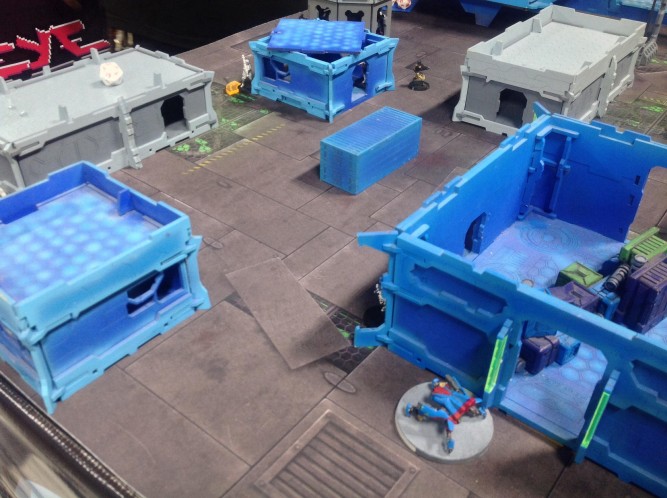 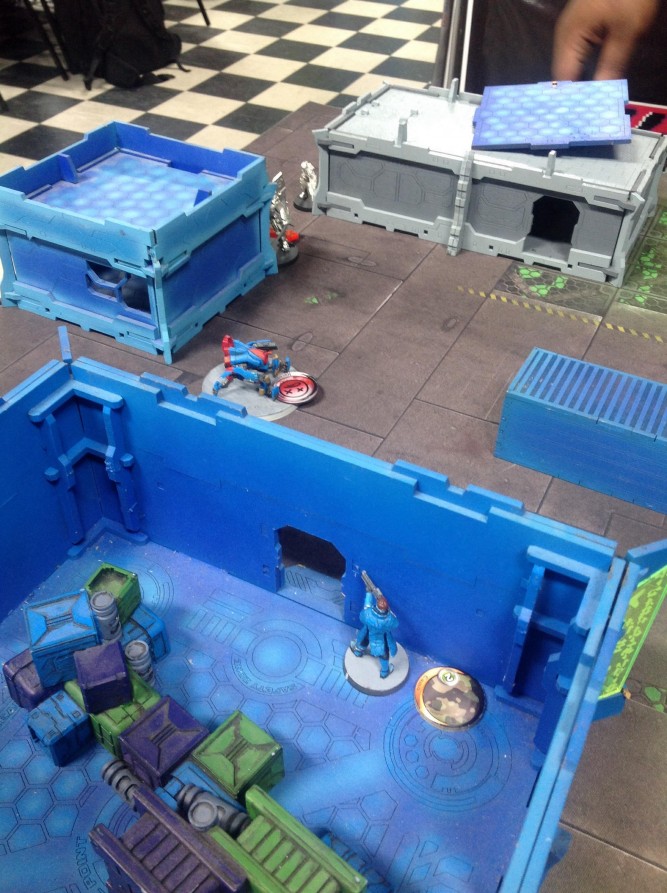 Cobra taking on the Daiyokai 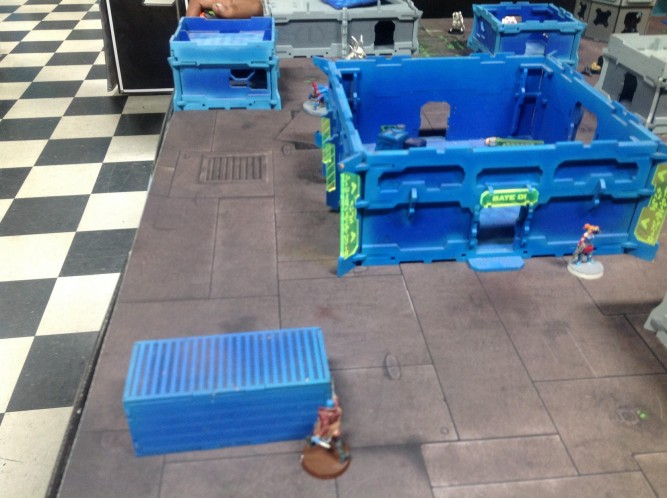 The HELOT FROM DOWN TOWN!

Start of my turn I slithered my Zulu to the other door in the building to take on the 5 man Keistotsu link. He was able to take out the HMG however the Kampeitai, after seeing her fellow team members die, anticipated where the Cobra would appear and BAM! Zulu Cobra falls to a crit to the head from the Kampei's marksmanship rifle. I then ran my FO Zulu cobra through another building to take out the Daiyokai only for him to be crit in two orders as well. At least he was able to cause one wound on the Samurai menace.

His turn he ran up the Daiyokai to the Kamau link to try and take out the link and after 3 orders of his Red Fury the Daiyokai dies to a crit and a failed save. From there he just moved up the link to get in better position for turn 3 to score. 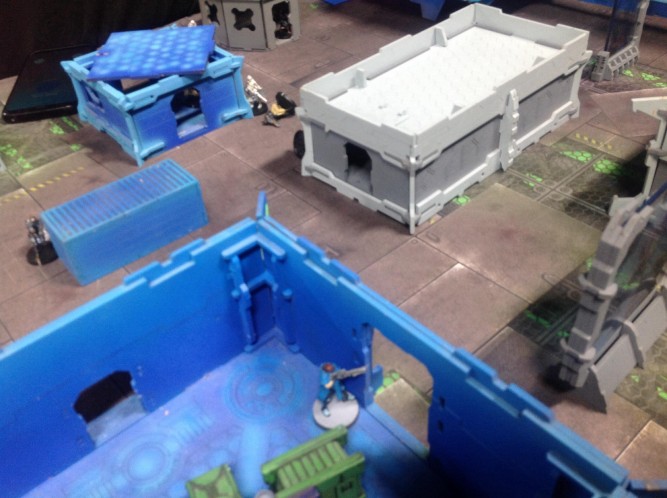 Cobra taking on the Keisotsu Link

After my Zulus were taken out I had no choice but to drop in my Echo Bravo on his left flank behind Neko Oyama and a Tokusetsu. He then puts on his cool guy shades, takes out his Boarding shotgun, and calmly walks towards Neko and the doctor blasting them away. Then, now that the treat of the Daiyokai was taken care of I moved the Kamau link towards his remaining Keistosu. The Kamau sniper moved ontop of a building to take out the Kampei sending the JSA into retreat. 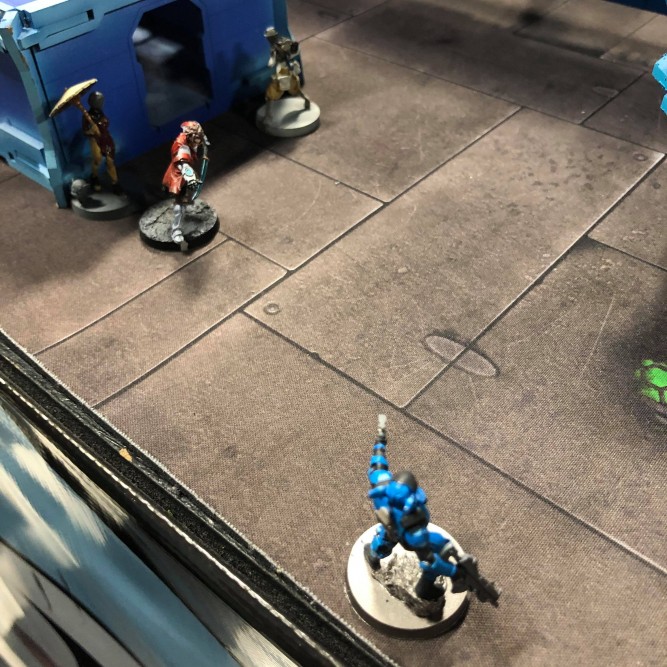