Close, But Can a Computer Even Smoke a Cigar?

Katerina Kresnova reloaded her multi rifle after she spent the last round in her mag finishing off a downed Morlock. Her team’s infiltration into the local Arachne node wasn’t off to a good start.

Morgan had managed to lose his primary lhost to a team of enemy Puppetbots right after the ALEPH team entered the Nomad facility. Without his forward observer’s gear functioning, they stood little chance of marking the Nomad facility as command had directed. Instead, they found themselves in a wild firefight with the anarchist forces.

Her Dakini team had managed to stop the Puppetbots from scything through their position entirely. Her Deva assistant, Moya, collected some valuable intelligence from one of the Nomad civilians hiding in the facility using her sensor system before she was cut down by a raging Morlock. Morgan had finally gotten off his ass and back in the game, dropping out of his thermos-optical cloaking and hacking one of the bots. Katerina had then gunned that bot down on her way into enemy territory before she finished off the Morlock she now stood over. Unfortunately, the puppets had carved through her force’s left flank and succeeded at scanning information from her troops before she was able to avert the damage.

Alarms pinged on Katerina’s HUD as an enemy drop troop snuck up on her Dakini team, taking Delta-133 and Delta-134 down with a flamethrower before the surviving Dakini, Delta-135, could shock the Tomcat into submission with its built-in stunner. Crap, she thought. This mission is going to hell in a handbasket, and there’s not much I can do to stop it. Things went from bad to worse as she heard a muted explosion sound behind her. Her HUD told her that an enemy engineer had just detonated a demo charge, cutting off her team’s primary avenue of escape.

Distracted by the worsening tactical situation, Katerina almost missed the Morlock charging at her out of billowing smoke. The fine-featured Nomad swung a thin sword at her head with a howl. Katerina thrust her left arm up and stuck the energy blade that formed on her left forearm into the creature’s chin. It dropped immediately, its swing missing Katerina’s head by a heartbeat. She saw an enemy servant bot heading toward the puppet she’d shot down a moment earlier. Knowing she had only one chance to salvage the mission, she took off toward the Nomad line.

The Puppetbot popped back to life in a shower of sparks. Katerina lept toward a wall for cover, noting a Nomad civilian hiding on the other side. She quickly hacked into his datalink, downloading vital information on the Arachne facility. The mission wasn’t a total loss. She needed to extract, ASAP, though. The Nomads had kept her from finding all the information command had tasked her with retrieving. But she’d be back. 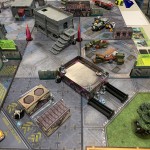 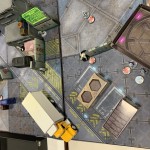 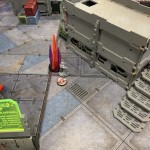