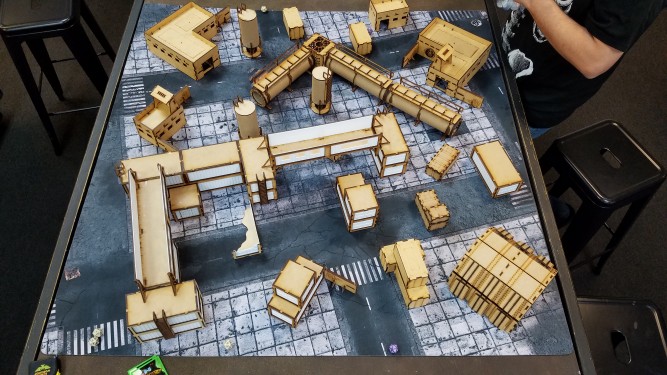 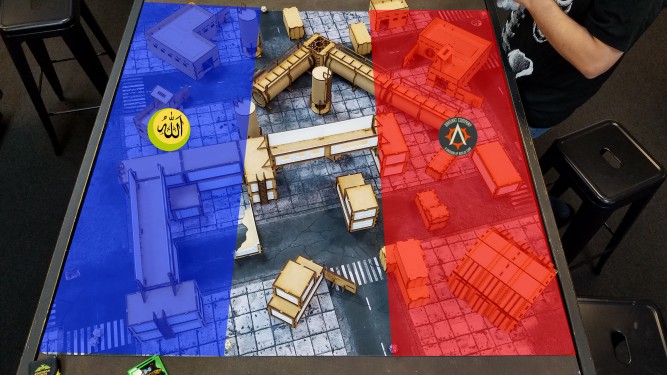 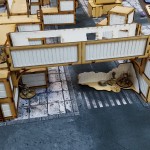 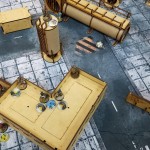 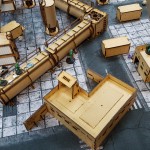 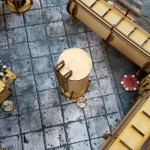 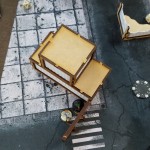 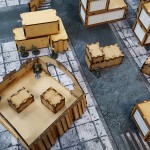 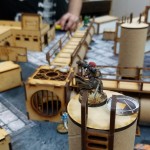 The bowels of the Liberty Cargo Administration building was filled with crates and massive mover pipes. The information given by the adh-Dhi’b, led them to the Dahshat companies home base under the PanOceanian complex. Adam Kriegler and his hyper-power based company, Quasar Financial had been funding Dahshat forces to cause damage and chaos to Haqqislam forces on the asteroid, and Aafah had finally tracked down their base.

“Ra’id Aafah, the mercenary forces are not sending any distress or alert calls. They do not appear to know of your presence.” adh-Dhi’b operations reported.

“29, we have a green light. Eliminate all targets, and find Adam Kriegler-”

“Take positions!” Aafah ordered as the Shihab began opening fire at the targets pouring out onto the field.

The remotes shots streamed out, cutting down McMurrough, then turning, it got a target on a bounty hunters team among shipping crates putting down the mercenary messily. A Rui Shi was enhanced by Valerya Gomez, but it too succumbed to the Shihabs machine gun, high caliber rounds ripping through the metal. From a small building, another Shihab turned and caught the 29’s Shihab out in the open and fired on the remote, ripping into it.

Unknown to the mercenary leader and primary squad, Pixie had crept behind their lines. Sneaking up behind the storage house, she heard the lieutenant yelling orders and information into his comm-link. She grinned wolfishly. Rounding the corner, she catches the man by surprise. He has no time to yell as her SMG barks. Cackling she runs forward to the doorway of the building, and pokes out, again the SMG fires, hitting a Ghulam with a Missile Launcher in the chest. The woman collapses back against the shipping containers, the launcher falling with a thud, alerting the other three. They had no time to act though as the SMG rounds found the doctor next. Springing from cover, Pixie ran right into the last brawler, she tried to shoot him point blank, but he ducked and rolled, coming up as she drew her blade, her grin from ear to ear as she slashed through him.

The Dahshat forces fought to regain the field as their leadership fell, the Hunzakuts and Libertos fighters moved forward, taking defensive positions as Valerya and her Zuyong bodyguard moved along the pipe network, keeping to cover. One Libertos took some initiative and launched a DEP right into the Rafiq, Ein. The remote exploded in a small fireball, Leila ducking down and covering her head to avoid the shrapnel. Getting up she tried to take shots at another Liberto, but tis mimetic properties helped it avoid her round, the alien creature dodging closer along the walkway.

Fahim hefted his Spitfire then, and rounded the corner, putting the Dahshat Shihab into his sights and pressing the trigger, wrecking the remote easily. Leaning out from the wall, he put a stream of rounds into the Libertos on the walkway, the alien falling to the ground, covered in blood. Advancing, the khawarij leapt into the air, sighting down the walkway onto Valerya and her bodyguard. Neither had a chance to respond as lethal accurate rounds found their marks. Seeing no more targets, he turned and put more rounds into the burning hulk of the Shihab remote, making sure battlefield repairs were impossible before, again taking to the air, and catching the Dozer, hiding behind the wreckage by surprise.

Fahim leads the group forward as Pixie runs around the shipping containers, and catches sight of their target, Alex Krieger. The man was yelling obscenities at a bodyguard as Pixie runs forward. Blasting the guard in the back she walks up to the businessman slowly, drawing her blade with a cheshire grin.

“Oh hello love. You are coming with me.”

Coming up to a large pipe, Khadim looks under it, and on the other side sees a panoply of supplies. Handing his shotgun over to Fahim to hold, he got down on his stomach and crawled under the pipe. As he began rifling through the supplies, he heard movement on the other side. Too late, as Fahim leapt up onto the pipes walkway, a hunzakuts shotgun blasted into Fahims chest and he fell down heavily. Khadim grabbed his medical supplies and leapt onto the walkway as well, he felt the shotgun blast in his side as he pulled out a syringe of painkillers, giving it to Fahim before he collapsed.

The Hunzakut then melted off into the shadows, the two irregulars being the only forces left of the Dahshat defense. Pixie walked up then, announcing her find, “Well look who I found! The man of the hour! Mr Kriegler, meet your adoring fans.”

“Oh fuck off.” he snarled angrily.

“adh-Dhi’b, can you verify this man's identity?” Aafah called to the cruiser.

As she waited for the report to come back, she walked over to the man, smashed his face in with the butt of her rifle. The crack of bone, nearly audible for all to hear. Screaming in anger and pain, Kriegler collapsed to the ground, clutching his face.

“These bastard mercenaries couldn’t do anything right. You were supposed to have been bottled up in your little hangar bay, playing diplomats, and trying to stay out of fights.” He stopped only to spit some blood and teeth out.

Something was wrong though, as Aafah glanced at the blood and teeth. It was the wrong color.

“Ra’id Aafah! Be warned! Alex Kriegler is NOT human! Acknowledge! That thing is not human!” a panicked voice yelled over the comm-link from the adh-Dhi’b.

Aafahs eyes widened in surprise, as the visage of the man melted away, and a sword appeared from nowhere. The split jaws stretched wide, “Now you die Maih-HURK!”

“What? Your just going to ignore me? I had my sword at your back the whole time ya wee froggy bastard! For Christs sake, no one remembers me!” Pixie yells angrily, her viral blade protruding from the Shasvastii’s chest.

The Shasvastii looked at in surprise and then collapsed. Pixie kicked the corpse of her blade and flicked some of the blood off, shaking her head.

“Well, I suppose that answers some of the chaos.” she concludes, wiping the blade and sheathing it.

Nodding, Aafah grins, “That should provide a measure of security to the NBIS. Well done 29. Let's grab this corpse, and grab whatever intel we can find. Spread out, and report back to the adh-Dhi’b what you find. After this, I think it's time for some leave.” 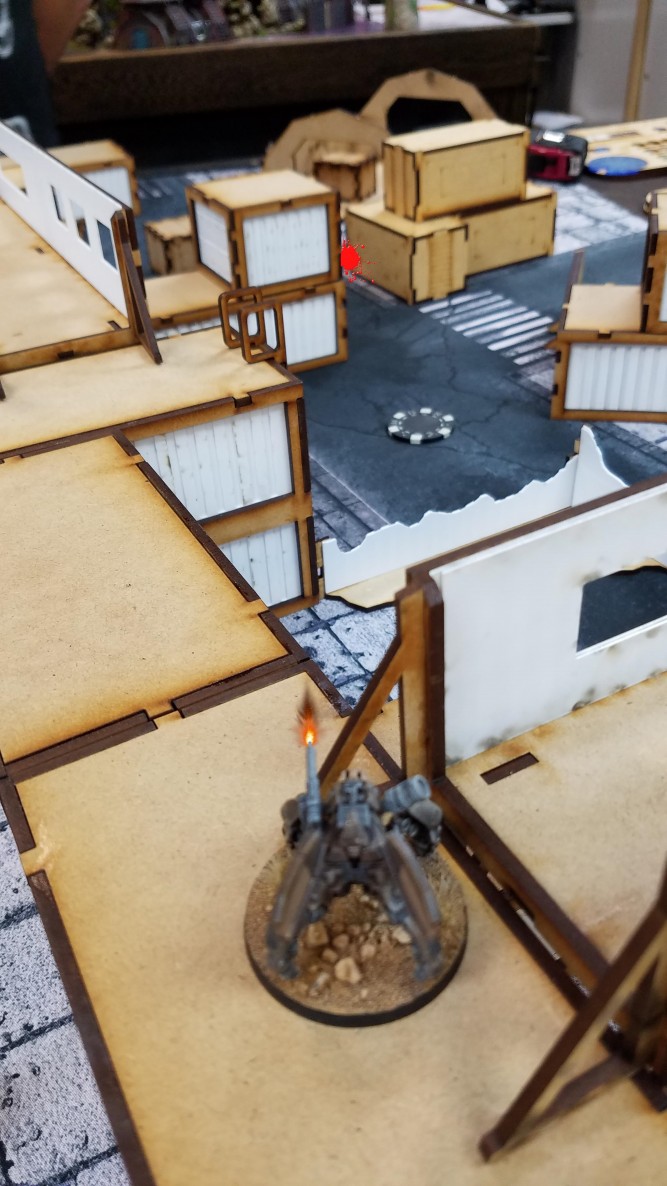 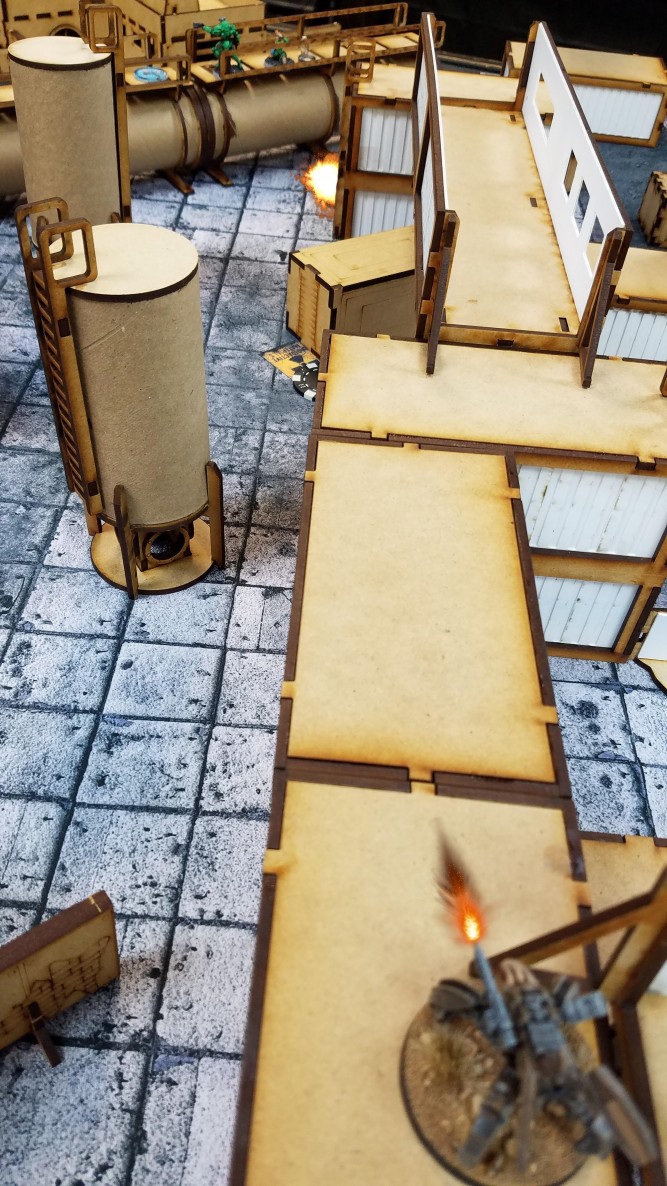 Ruishi dies twice as well. These lanes are a couple of inches outside of 24". 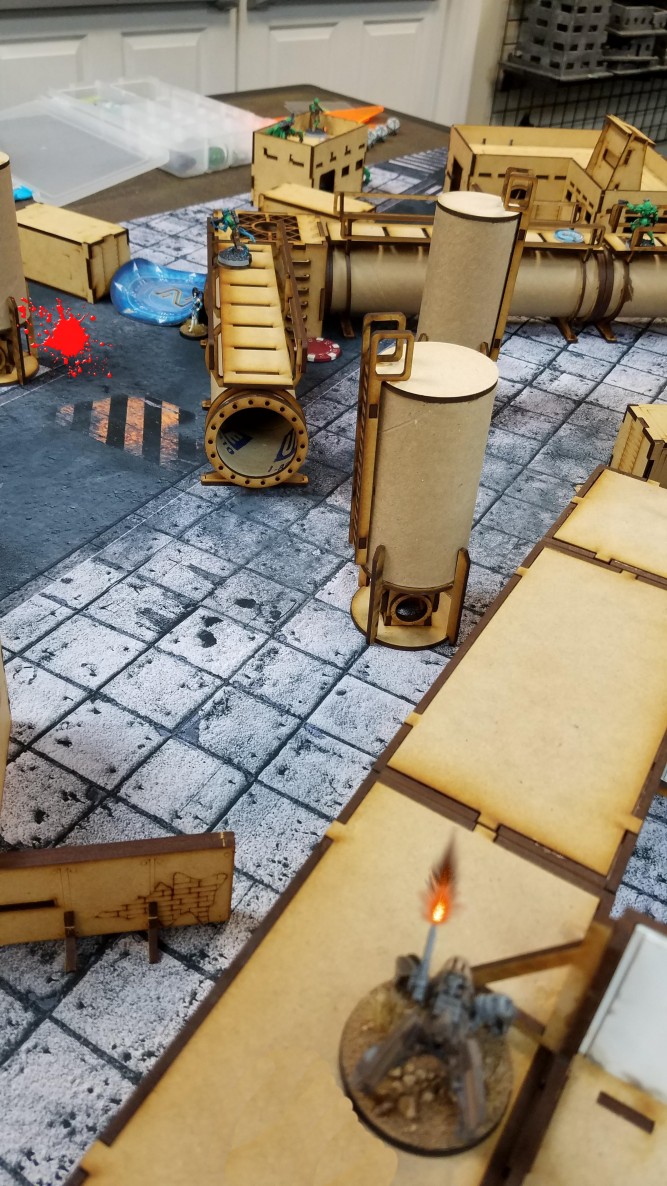 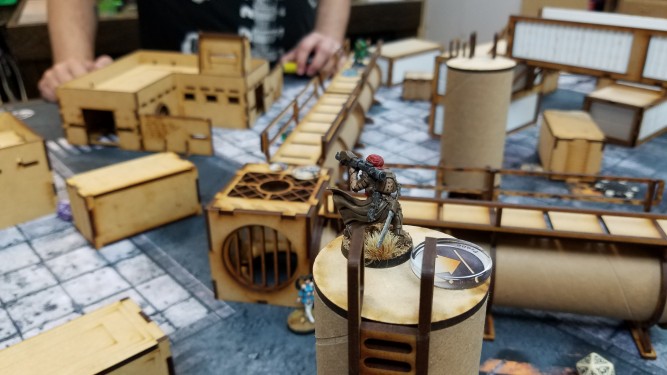 This was a great spot...until he couldn't dodge McMurders chain rifles... 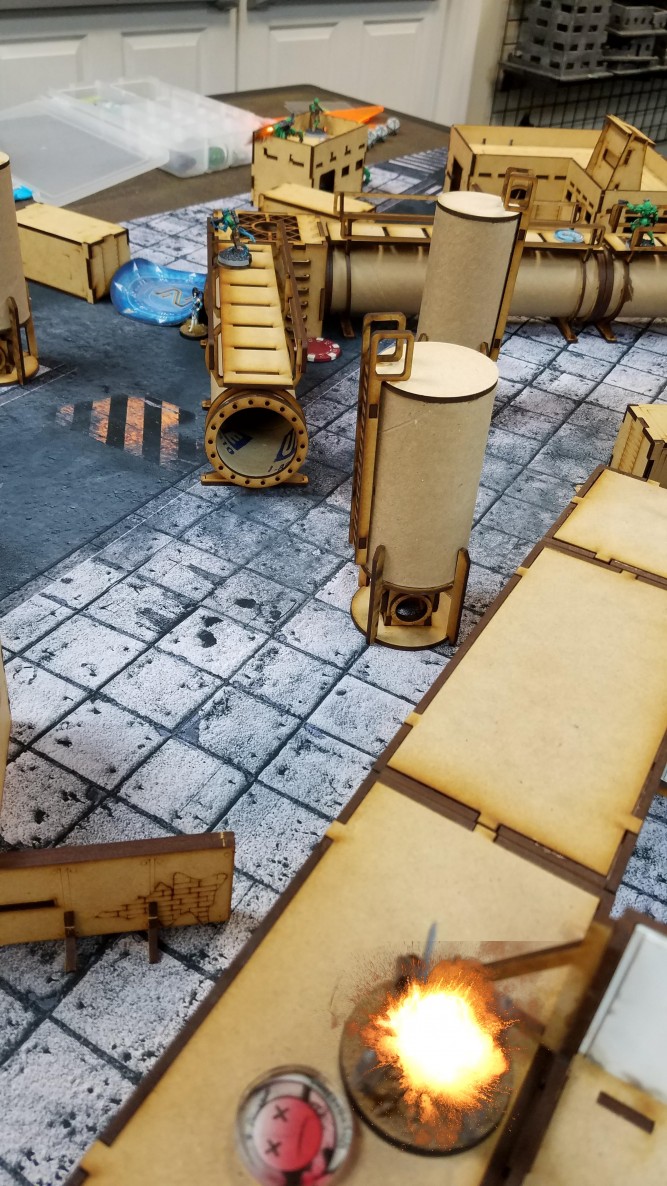 It takes a TR Bot to kill a TR Bot. 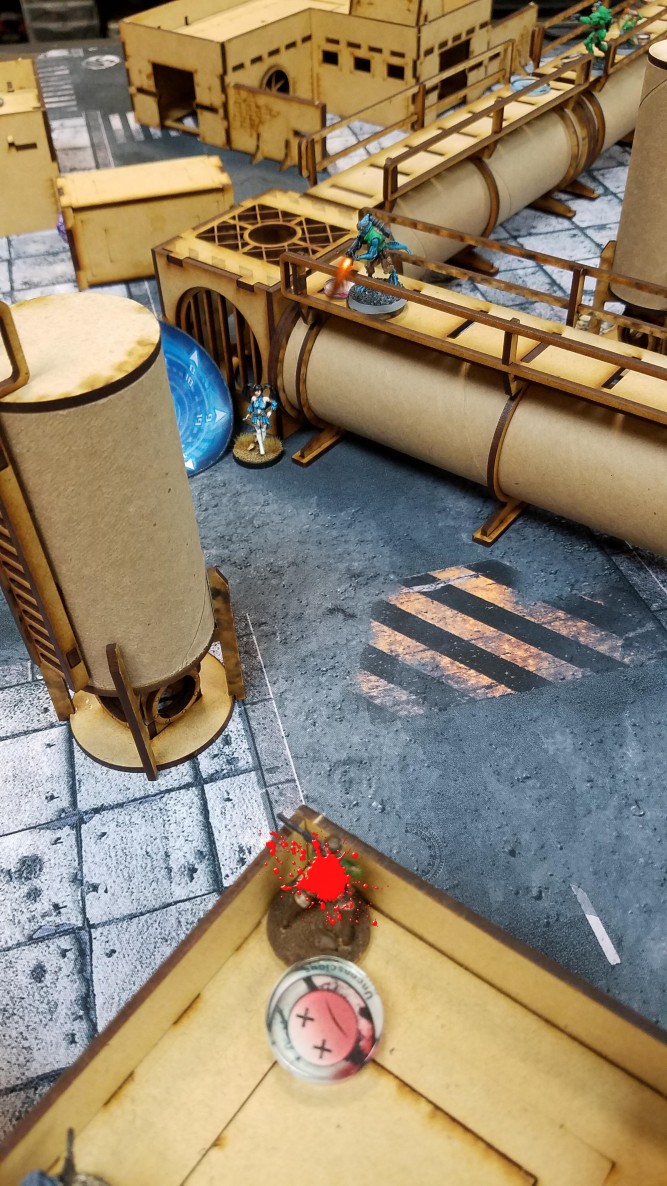 Tilki forgot the shooting lever...gets hit by DEP but makes one of the armor saves! 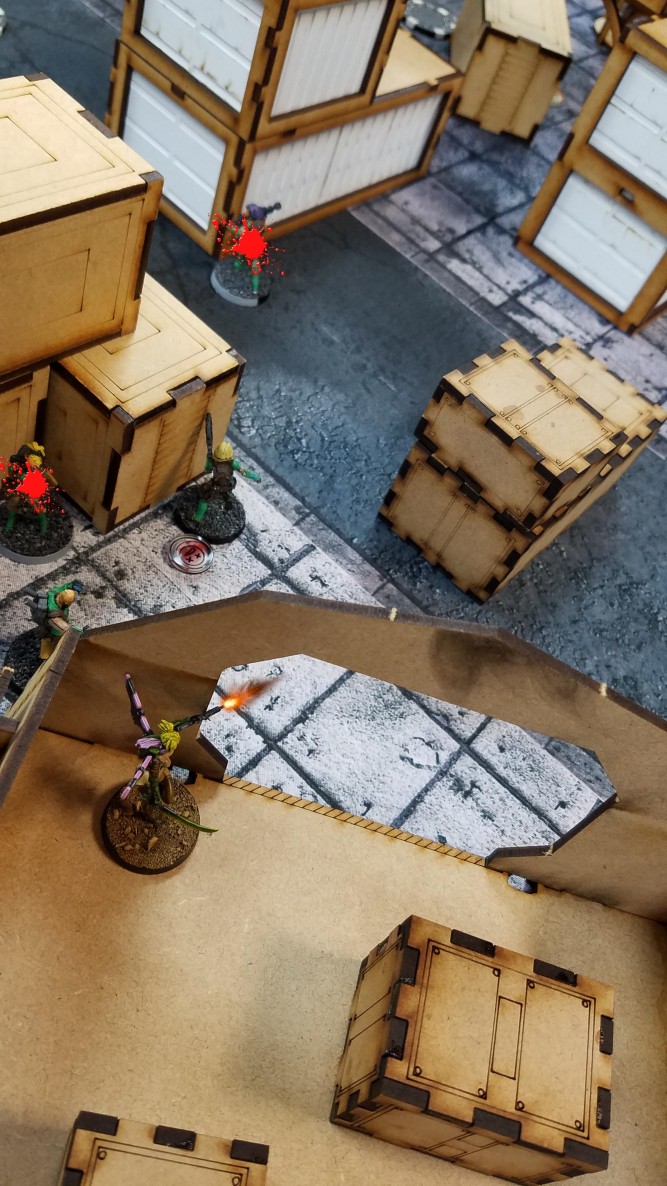 Pixie demands vengeance. This is after killing the Ghulam LT south of the picture. Firefight! Where everyone is Van Zant! 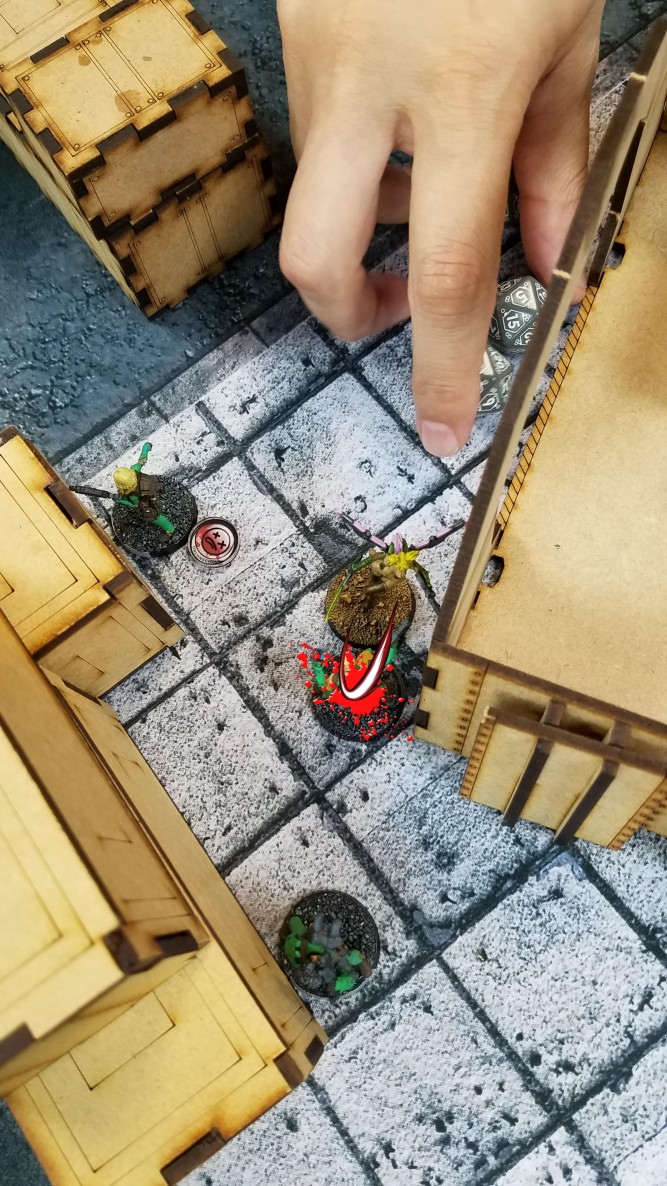 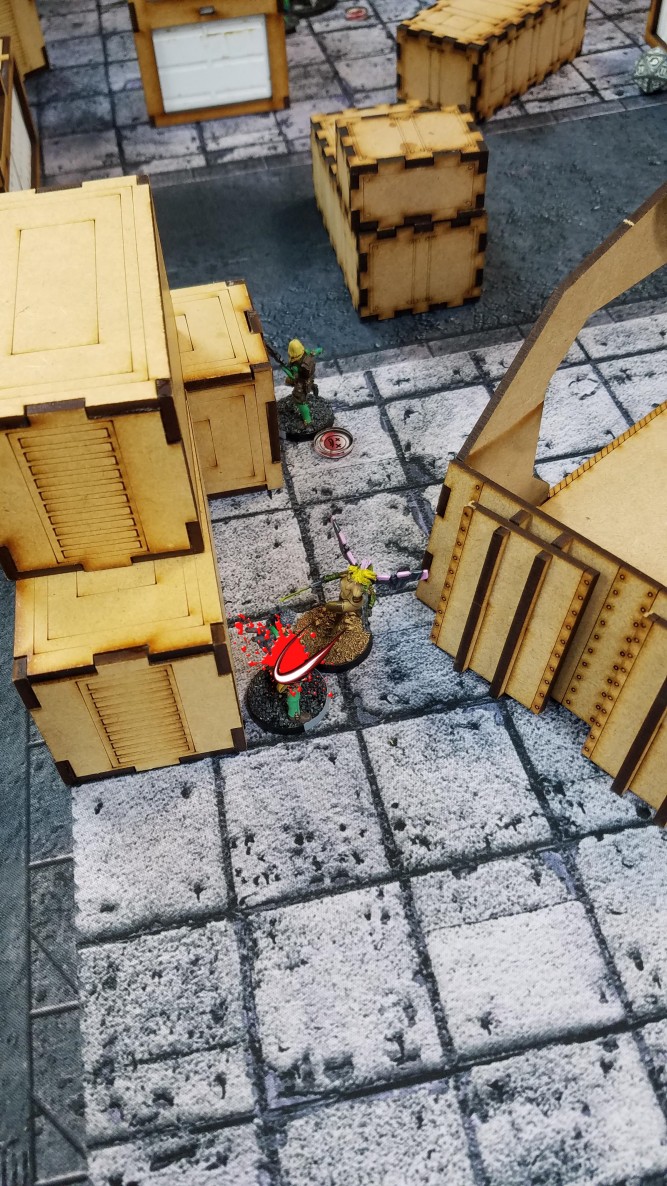 He made his armor rolls! Time to cut him! 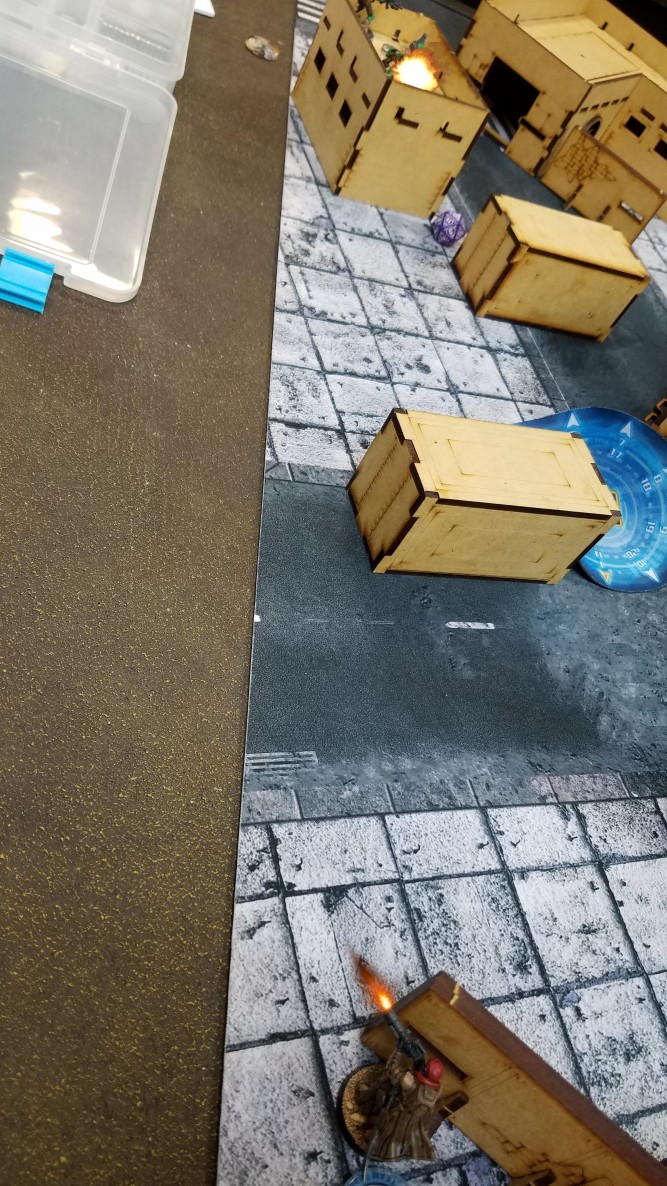 Send a Khawarij to do the job. 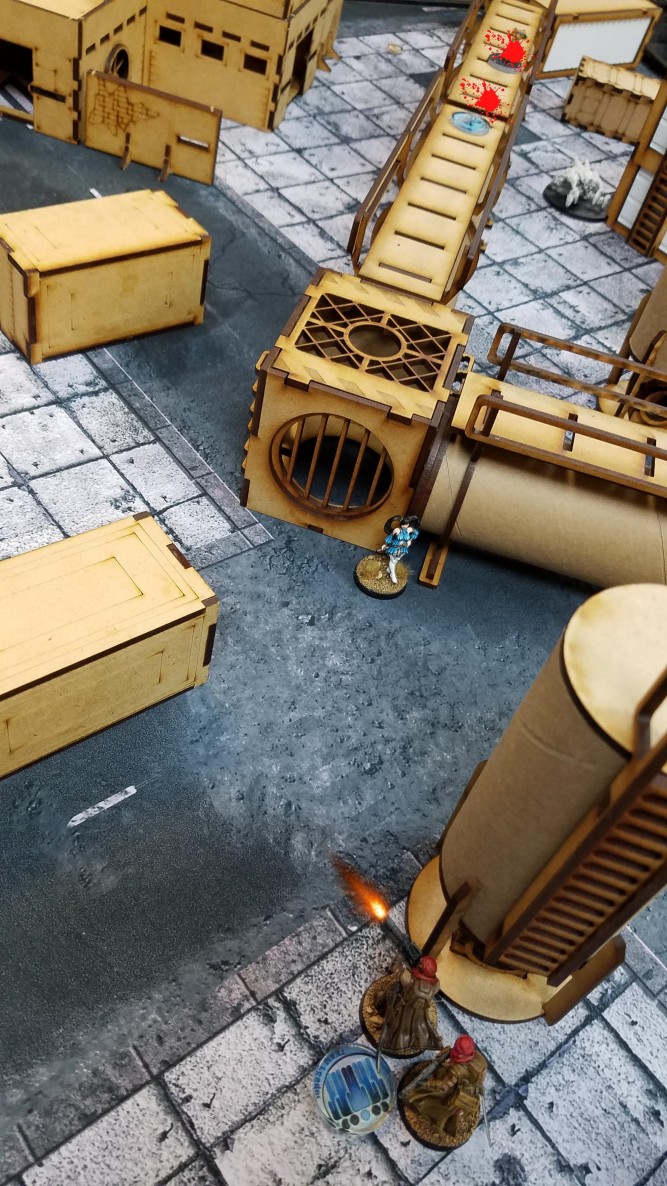 Taking down the second lieutenant elected. Fahim owned these firelanes.

Khadim sacrifices himself to revive his fallen brother. 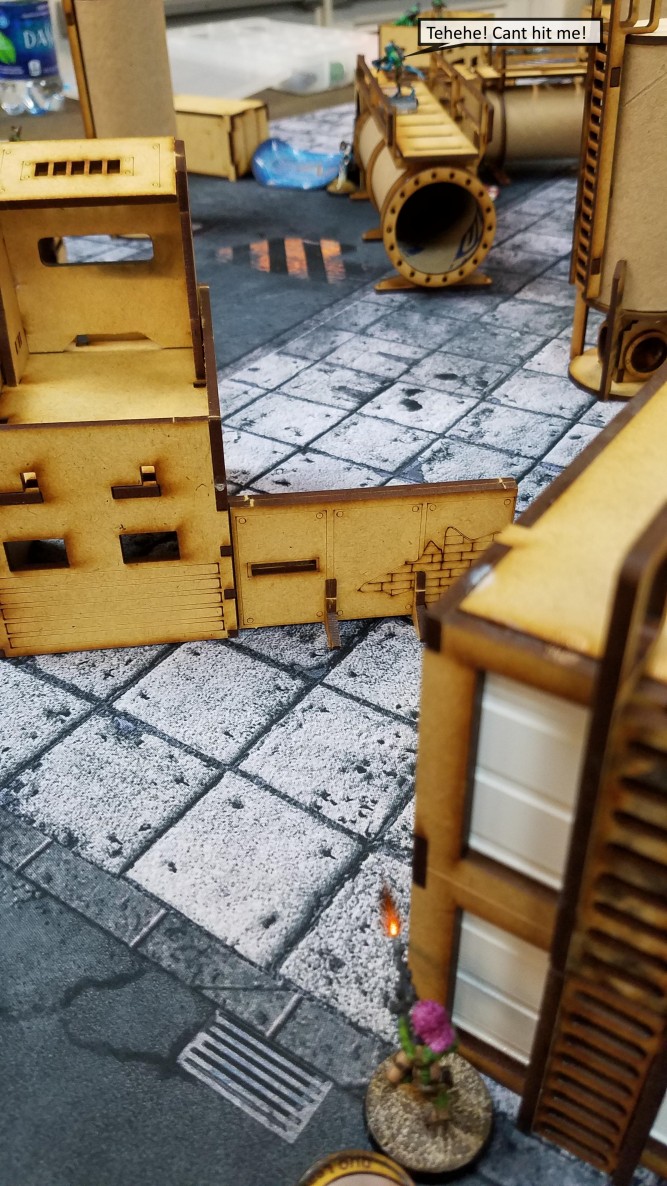 Also, Leila is afraid of Fishbois...she cant hit them...