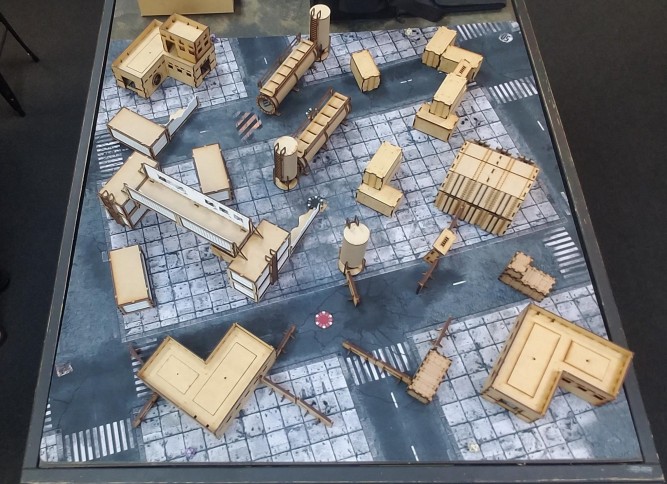 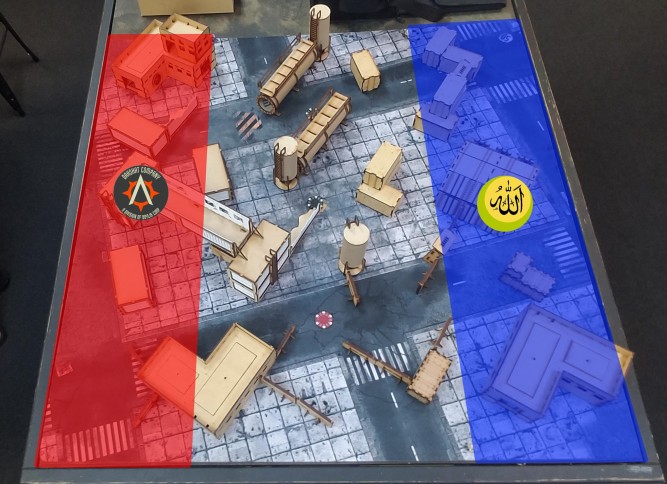 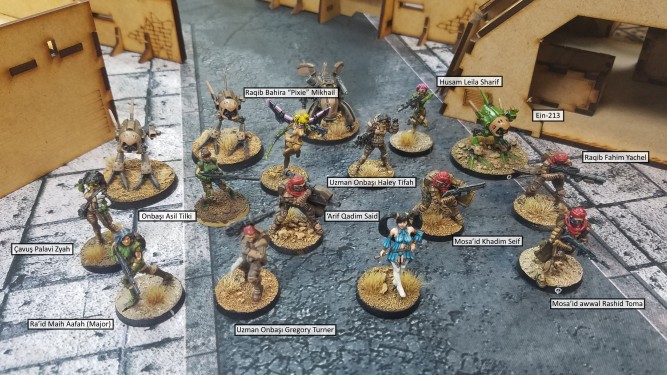 “Ra’id Aafah, we have a mission that we need you on. A Dahshat company unit is moving to take medical supplies from one of our manufacturing areas. Considering the nature of the work being conducted there, it is paramount we keep those medical supplies secured.”

The Black Sun Analyst was sitting across the table from Aafah, speaking as he handed her a tablet with the information on it. The facility was mothballed during the chaos surrounding the asteroid, but it was kept in a ready state. Downloading the information to her AR, the major handed back the tablet, nodding.

“Understood, we will do our best. The facility has a lot of open space though, and Dahshat are known for heavy weaponry. We will do what we can.”

As soon as they took position their position lit up right on Qadim as soon as he looked out over the workshop floor, heavy caliber rounds impacting into the building. One clipped into his shoulder, and fell back behind the buildings thick wall.

“Allah protect...they have an Akrep.” he yelled down.

“They have a damned Akrep!” 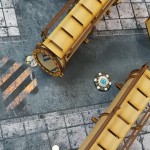 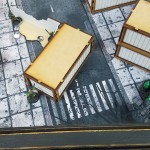 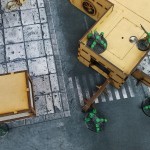 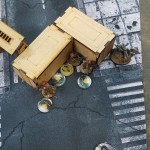 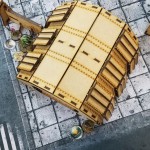 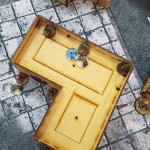 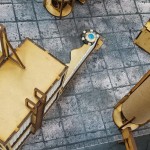 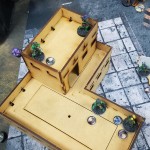 The Maghariba Guard TAG crashed out from behind shipping containers, its tail swinging to its next target, their own forces Shihab catching it across the floor. Fire exchanged rapidly but saw the remote riddled with bullets. The heavy legs continued crashing forward as it broke cover, sending rounds into Tilki, her bullet bouncing off the armor ineffectually. In the chaos, a hunzakut crept forward and grabbed the box of medical supplies near the tank, withdrawing back into her own lines, as a stream of fire flew over Leila and into Ein, the remote being blasted apart as Leila screamed curses, trying to crawl further into cover.

“Pixie! I am dropping smoke on the target!” Gregory yelled, hefting his grenade launcher.

“What am I supposed to do, exactly, to that monster with my wee blade you hopeful idiot?!” Pixies voice came angrily over the comm-link.

The Nahab came running from the shadows, rolling through the smoke, she began slashing at the feet and cables of the great beast. Weathering the slashes, it turned, and slammed a foot into the Nahab, sprawling her onto the ground, as it blew the wind, and almost the consciousness from her. Swinging again, she hit a power cable, but the beast continued enduring the blows. 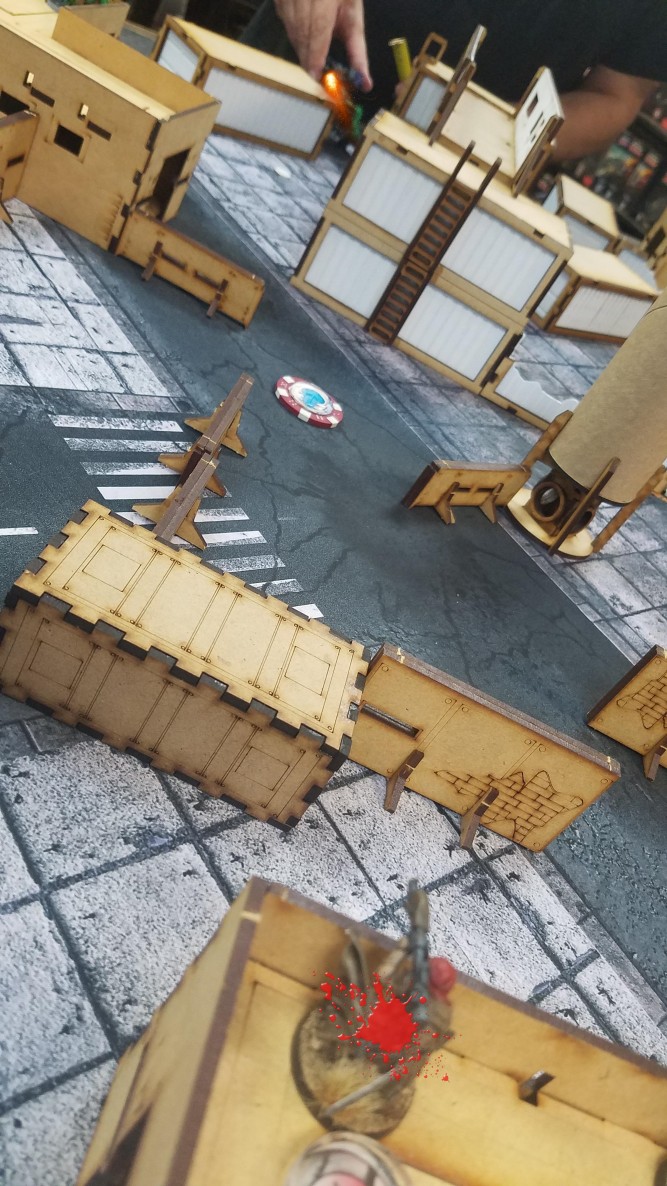 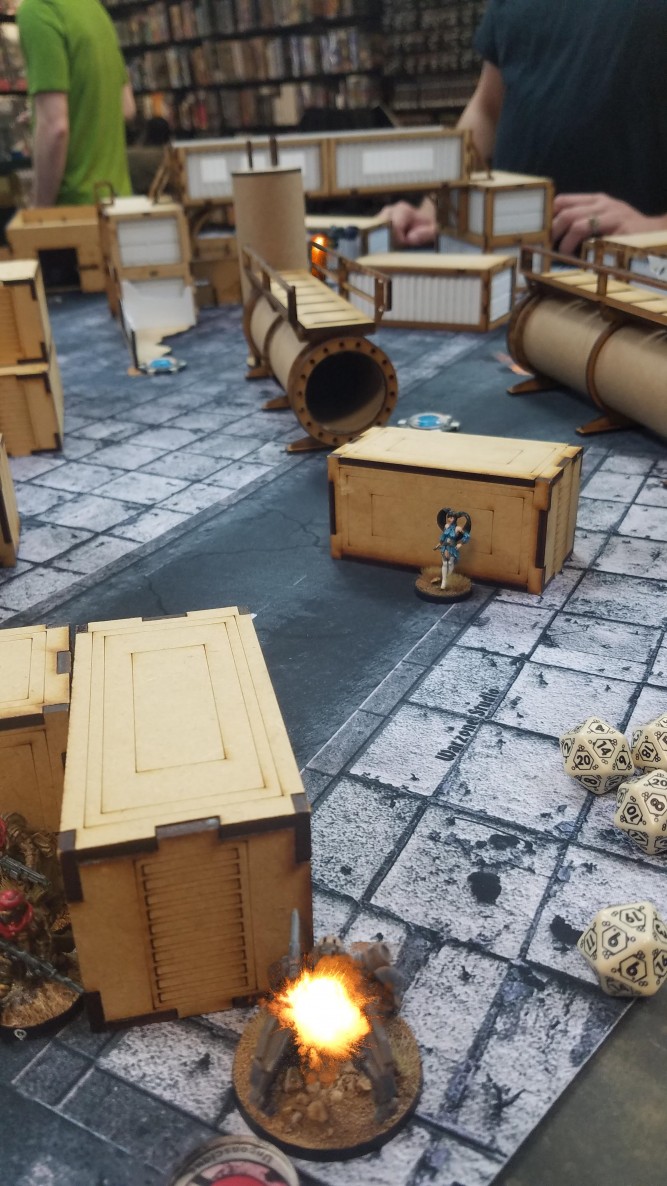 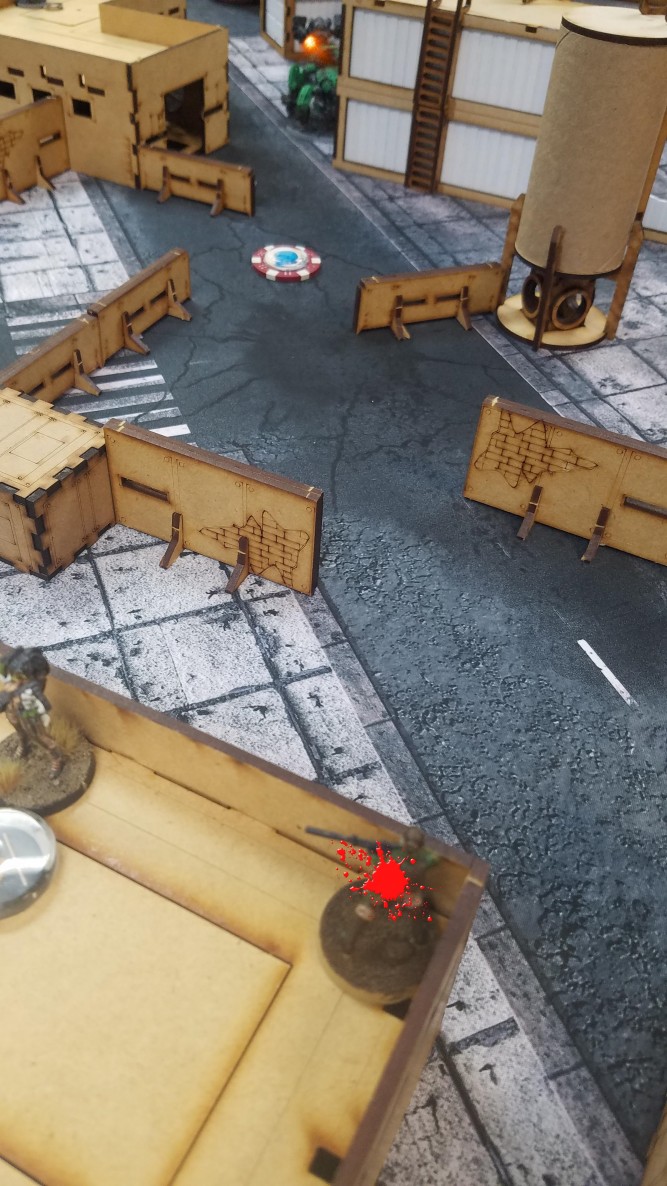 Finally out of targets... 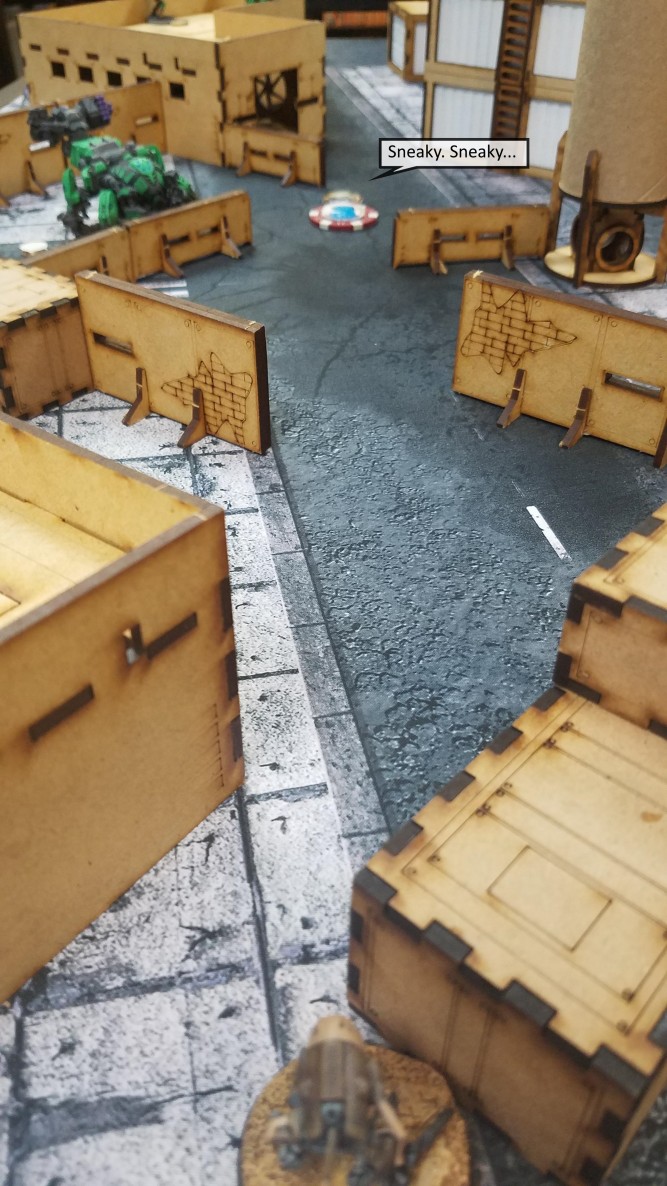 The Hunzakut takes advantage to grab a box... 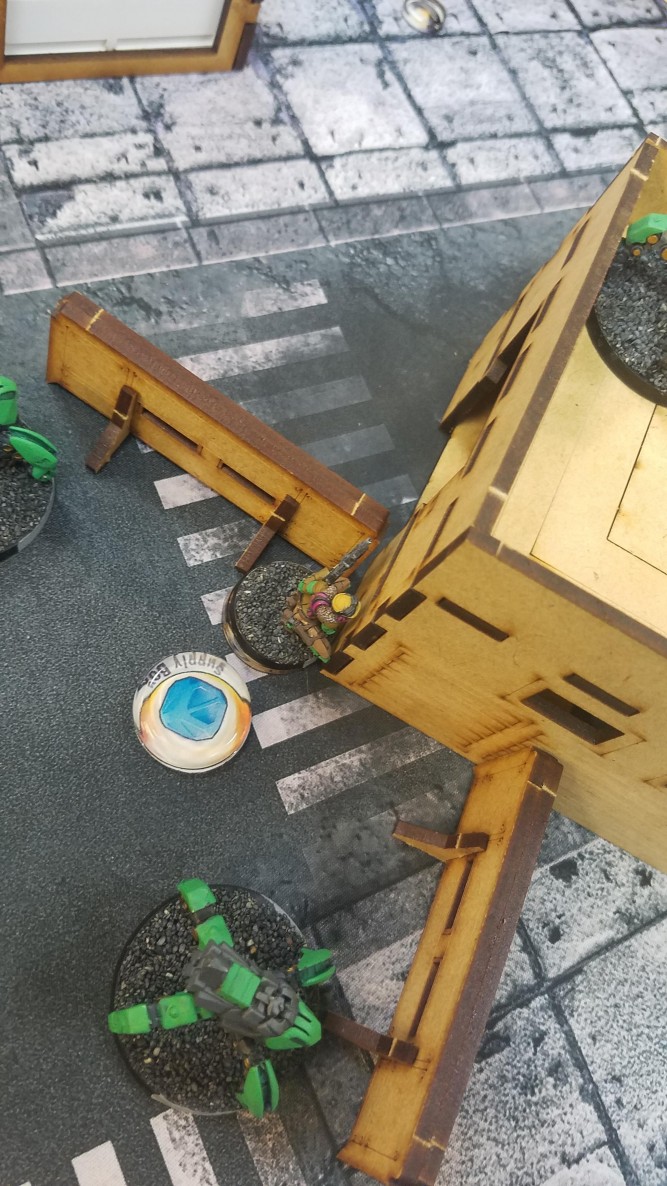 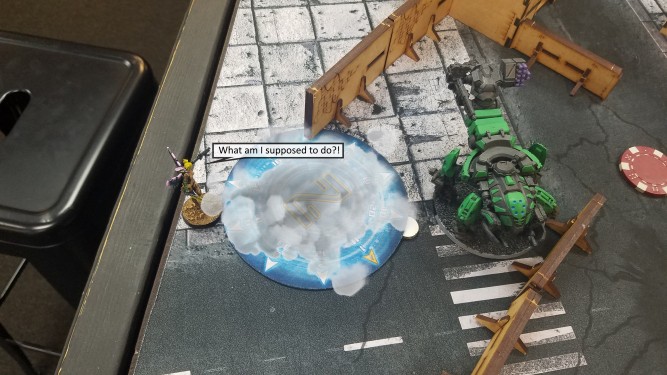 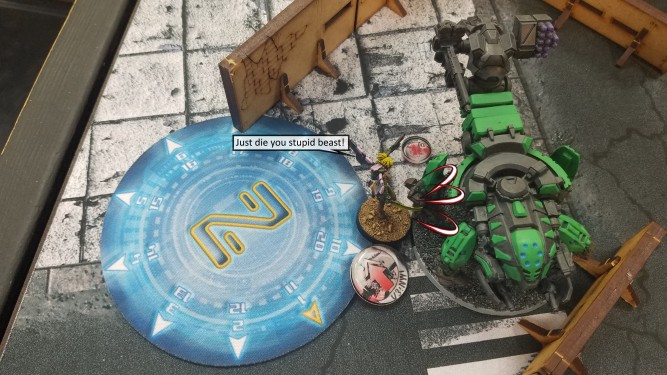 Pixie had a bad time...8 orders spent to deal 1 Structure via Crit... 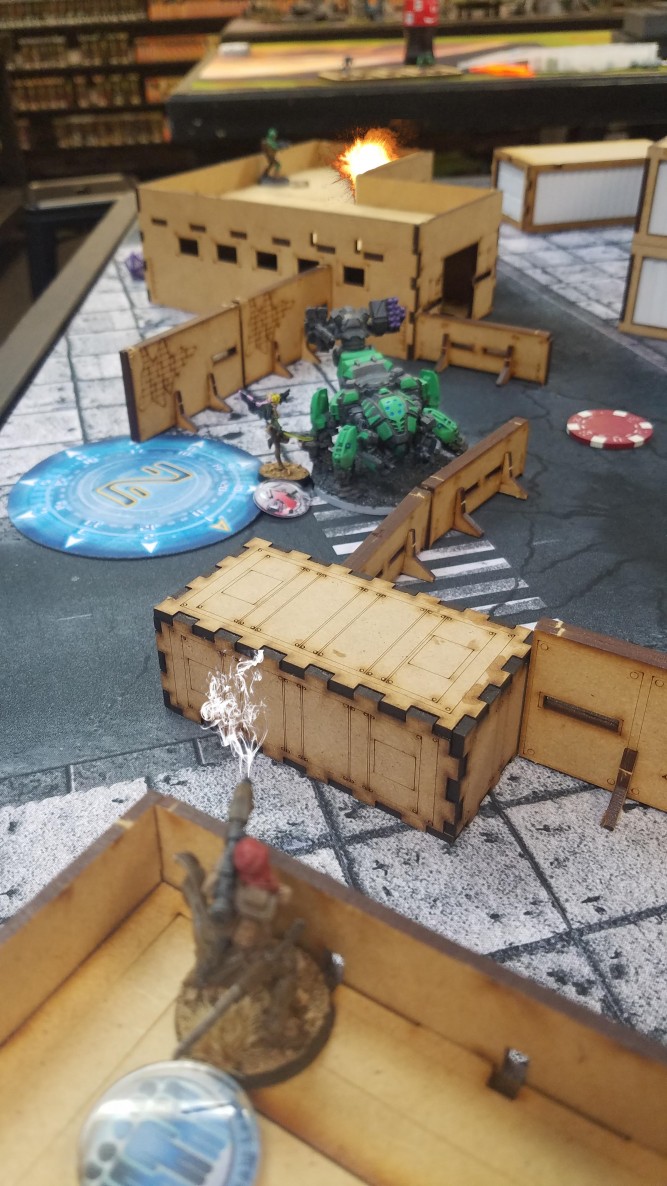 Clearing the path for the future.

On the building, Zyah crawled over to Qadim, holding his shoulder. Injecting the wound with regenerative enhancers, and quick clotting inserts, he grunted in pain and hefted his rocket launcher again.

A burst of fire suddenly hit Pixie from the side as a Libertos came out of camouflage, knocking her unconscious finally. A team of Dahshat Ghulams and Bounty Hunter began moving up to the center, grabbing more medical supplies while a Hynzakut did the same on the right flank. The Dahshat forces began withdrawing, as Toma’s team leapt from cover, Fahim leading the way. Taking sight at the TAG from across the floor of the workshop he began pouring rounds into the TAG, the beasts return fire flying all around him. Finally, his rounds put the TAG out of commision. Moving up he got sight of the Ghulam teams doctor making off with the medical supplies and put her down with a quick burst of fire. Taking sight of another bounty hunter, he made short work of him before the team had to withdraw out of the open.

Qadim stood up and put a rocket into the Bounty Hunter with spitfire, burning her to a crisp. Leila moved up to join Aafah’s team and putting down the Libertos who knocked out Pixie. Dahshat forces began withdrawing with the supplies. A bounty hunter grabbed the supplies from the doctors corpse as he pulled back. The Ghulam missile launcher tried to move to hit Toma’s squad, but the missile went wide, and Qadim’s rocket hit her and the leader of the company. The last hunzakut grabbed the remaining supplies and ran back to her lines.

“We need to push forward and get those supplies back, Qadim lead the way.” Aafah ordered.

Qadim nodded and leapt from the building. Landing, he shouldered his rocket launcher and pulled his blade. As the squad ran forward, he drove the teseum blade deep into the corpse of the beast, making sure no battle field repairs could bring it back. Sheathing his blade, he stepped around the corpse and tried to send a round into a Dahshat Fanous, but its flash pulse hit him dead in his eyes. Cursing, he let Gregory and his grenade launcher take lead. The man stepped out, launching a couple of grenades, but the blasts did not land where they needed, and he in turn got blinded by the Fanous. Leila hit the corner of the building and poked out trying to get the Fanous as well, but the remotes software was to fast, and she in turn was blinded as well.

“Stop bothering with the remote, it's not going to do anything but blind you.” Aafah yelled, rounding the corner with her shotgun she sent several rounds into the hunzakut guarding the medical supplies.

Shielding her eyes, Aafah ran over the barrier, the remotes flashes getting more glaring as she grabbed the medical box. After a few moments she blinked, the remotes were pulling back, and her AR confirmed the withdrawal of the Dahshat forces, and their bounty.

“Damned mercenaries ...they are everywhere.” she muttered.

This was going to be an unfortunate report to their allies. 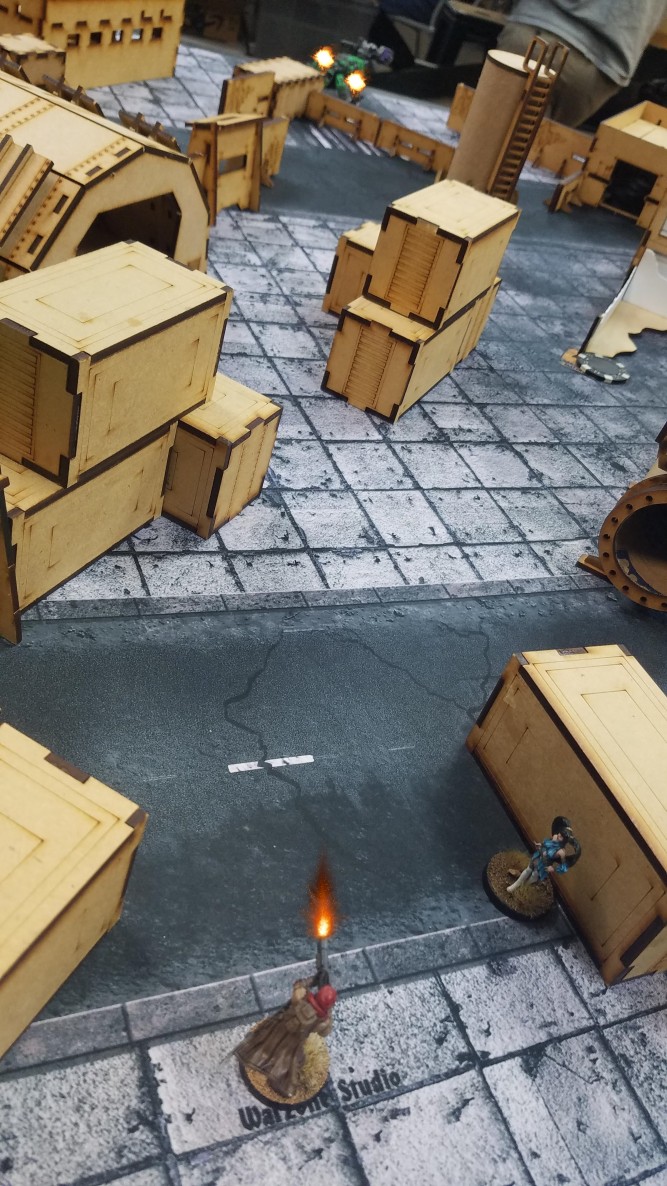 It's easy to crit fish, when your profession is Crit Fisherman. Fatality 2 is fine. 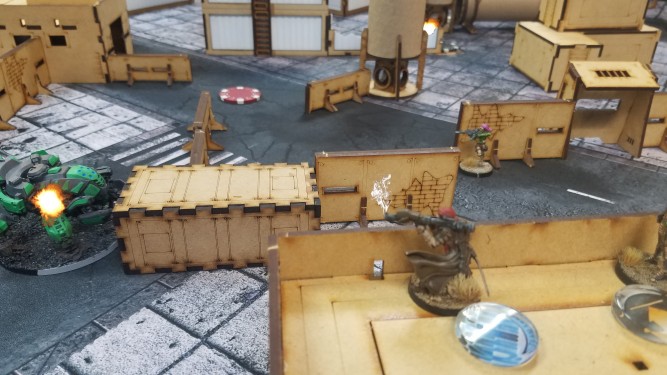 Knocking out out the Bounty Hunter with spitfire, and trying to finish the TAG. 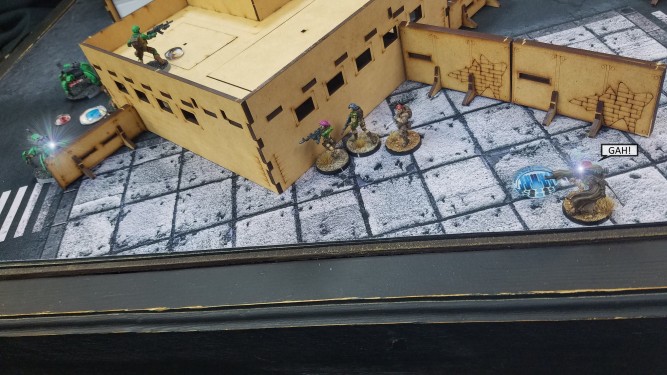 This flash pulse bot is not okay... 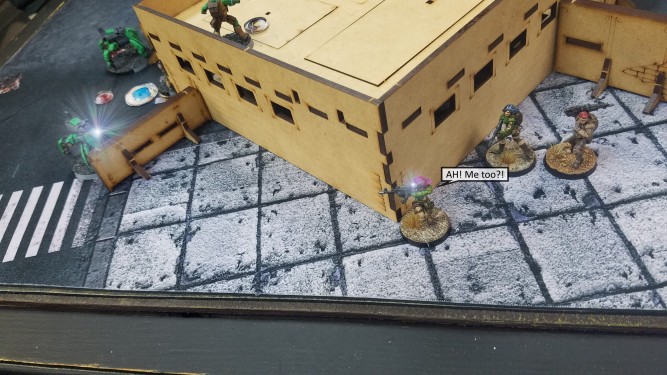 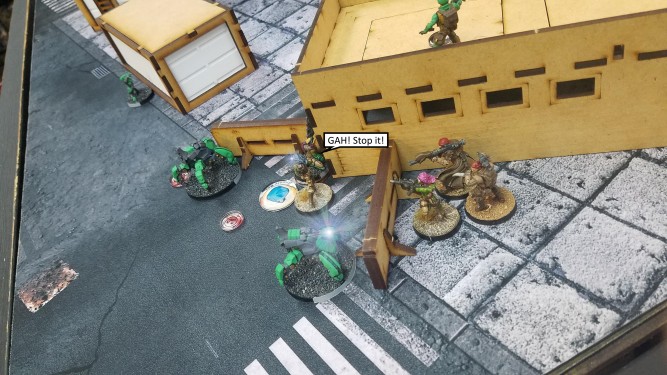 This Fanous won the game. If I had one non blind fireteam member I could have eliminated the box holder around the corner...

Sometimes, all you need is one trooper to hold their ground. The Fanous bot clinched the win by blinding the team.