Fought At The Gallery Maze: The Passageways
988 days 13 hours 31 minutes ago

Unmasking of PanO intruders in the Passageways

While patrolling the Passageways with a mixed Squad, we encountered a small Panoceania Hitsquad trying to play hide and seek with us. So we first had to find them and then to root them out.

So Unmasking was the Mission.
PanO won the lieutenant roll and chose first turn.
Both Krakots rolled Mobility (Red Fury: Climbing Plus, the SMG Superjump) and the Sniper rolled Smoke grenades (PanO with smoke …)
Data Tracker were the Hollow Man and the Knight of Montesa 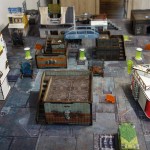 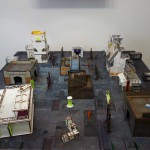 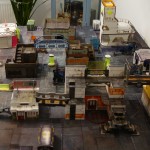 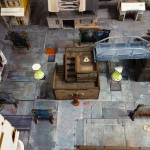 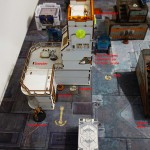 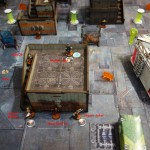 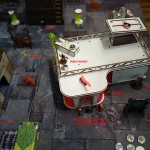 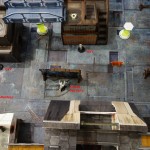 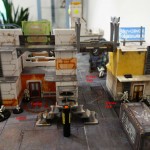 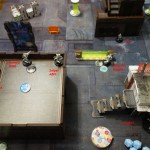 Despite PanO taking the first turn, not much happened during it. PanO disclosed a BSG Crocman and moved it forward to place two mines in proximity of the Sineater so that most likely he would be hit if he moved.
A direct attack was not possible because the Sineater did not deploy forward enough and therefore stood in total cover (blind spot, the railing was declared opaque). 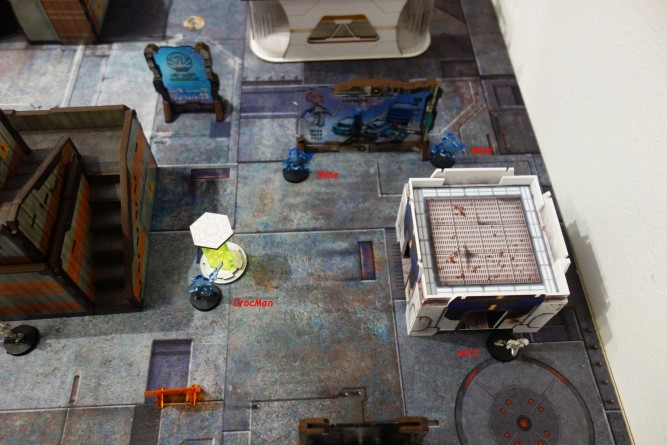 Only one picture of the mines placed by the CrocMan

One of the Transductors was used to get rid of the two mines. As supsected, the Transductor didn't survive this.
After this the Hollow Man tried to shoot the Bounty Hunter Sniper. Spitfire vs. Sniper in not optimal ranges ... After some lengthy shootout, the ABH went unconscious but the Hollow Man had suffered a wound as well, going prone. 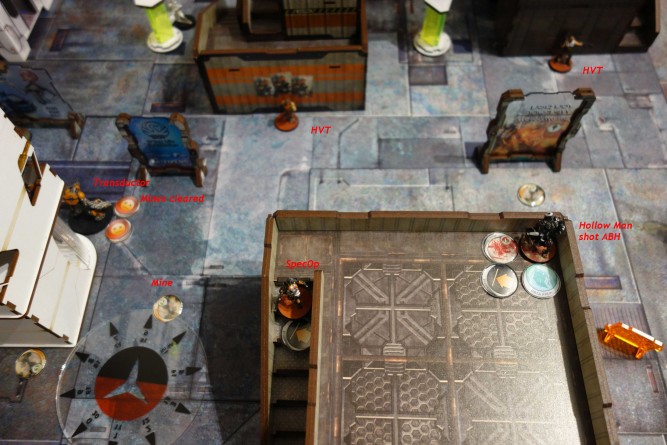 The Mines are cleared and the Hollowman had suffered a wound.

First the Sniper was resurrected by PanO.
Then there was lots of movement this turn, to be prepared for the last turn (will be seen in the End-of-Turn-Pics).

Having to ge rid of the Sineater to get control of the Consoles, PanO used the Bulleteer to drop the Sineater.

Last but not least, an additional Crocman appeared from hidden Deployment and many Troopers were put into Suppressive Fire 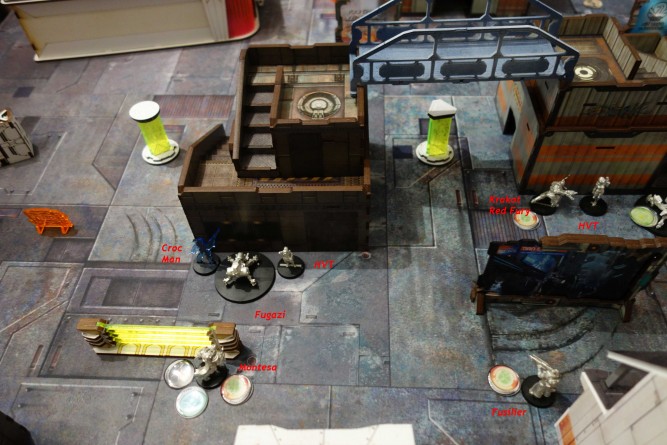 Left side of the Board after turn 2 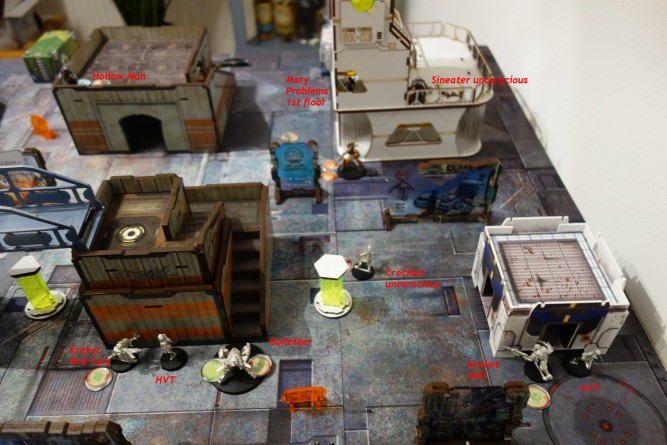 Right side of the Board after turn 2

Now the Puppetbots were sent forward to hack a Console. But first the had to bring down the Sniper using the AP Marksman Rifle. Afterwards the console could be hacked.
The right HVT was chosen (pure luck). But while moving forward the Puppetbots came into range of the Fugazi and so the PanO HAcker tried to immobilize the Bot. But failed (PanO and hacking ...)
So the Heckler moved forward to be in range of the Fugazi and fried the brain of the PanO Hacker using a surprise hack.
then the HVT could be shot into pieces using one BSG Puppetbot: 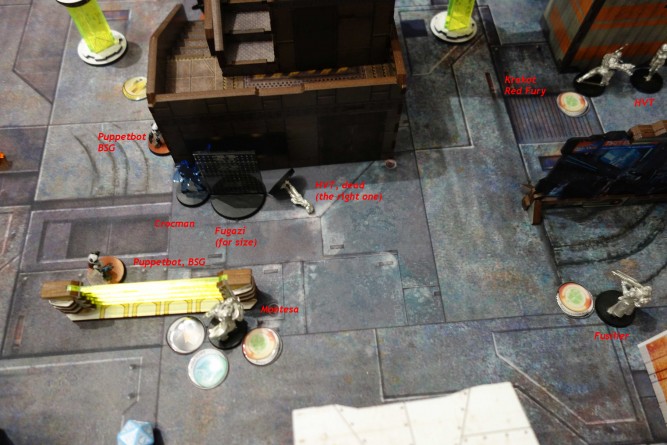 (the right) HVT shot down

Next Jaguar Harley dropped a Smoke Screen for the Intruder who in turn got rid of the Bulleteer. 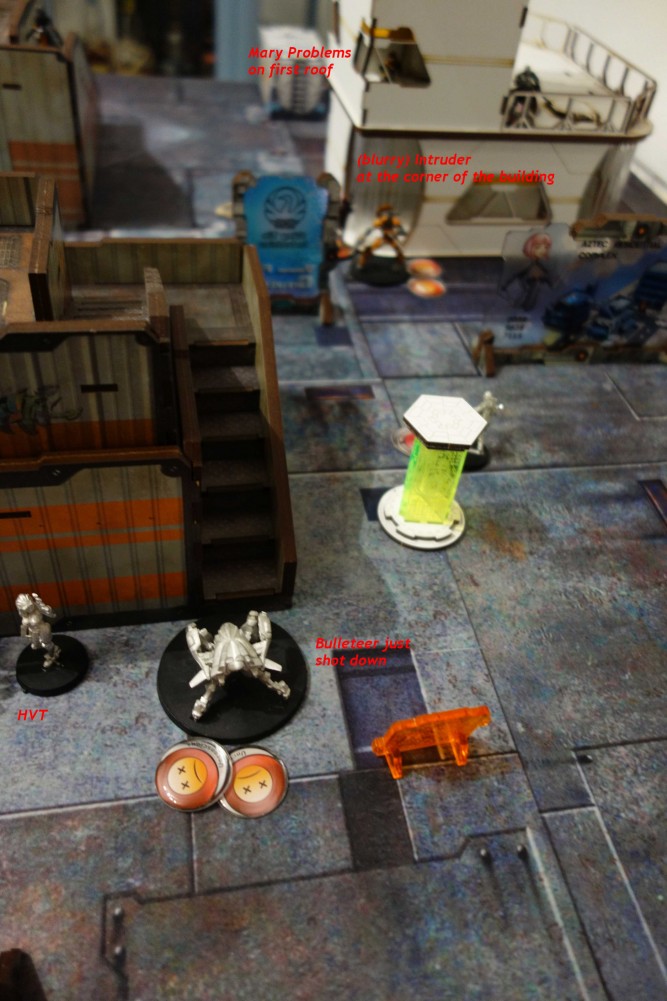 Now Mary Problems raised and shot a repeater on the roof of the building to keep PanO from moving the remaining Bots, especially keeping the Pathfinder from controlling the rightmost console. 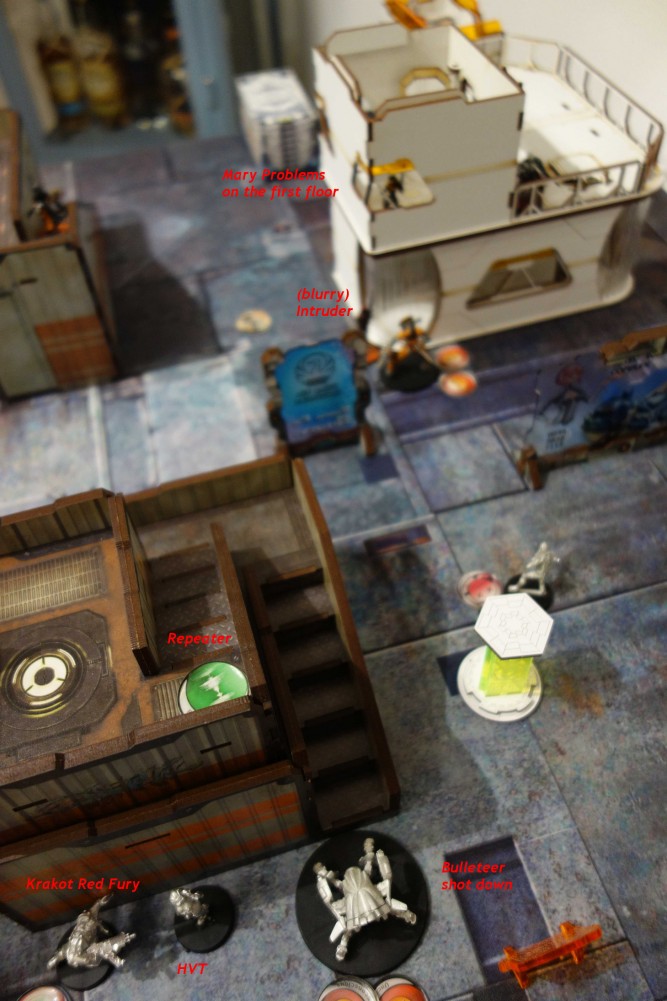 Repeater placed on the roof

Now began the turn of the Krakot. The Red Fury Krakot to be precise.
The Krakot, who got the Mobility Trait with Climbing Plus. climbed the building to get rid of the repeater. While he was there, he shot Mary Problems and the Intruder, because they were just standing there, without camo or full cover (in the case of Mary). At least it took some orders. 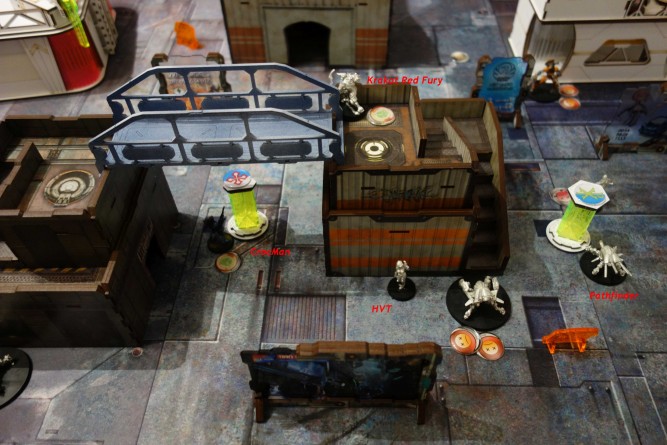 Now PanO used the remaining Crocman as well as the Pathfinder to hack one console each. With his second try he guessed the right HVT.
The second Krakot was used to kill the HVT and on his way, he shot the Heckler as well. At least the Krakot died to a mine.
Pics are more End of Turn (always forgot to take pictures midgame) 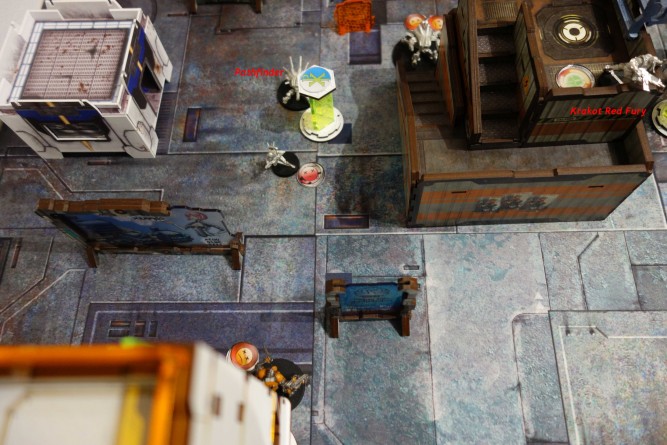 left side, Pathfinder had the Console hacked 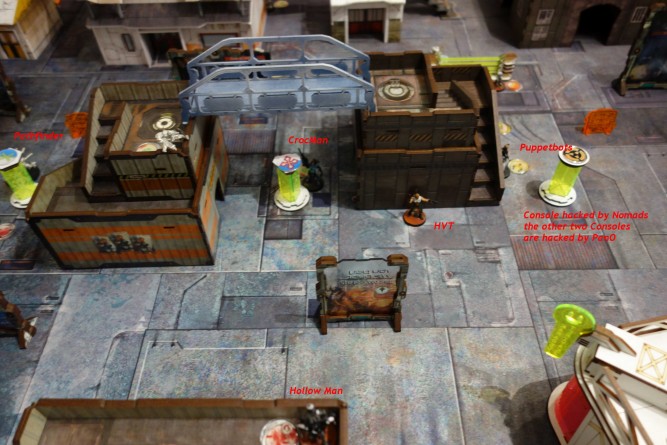 midfield, Crocman hacked the console, Scarface was he right HVT, therefore, he is missing

Now Nomads were behind, points-wise and there was only one possibility to turn the game and even this would become hard.
One Console had to be activated. So Harley threw a smoke screen, consisting of two smoke grenades, to shield the SpecOp from the Red Fury Krakot, the Crocman and even the Pathfinder.
The SpecOp moved on and using his last order, he reached the Console and hacked it, although he got shot down by the Pathfinder, doing so. 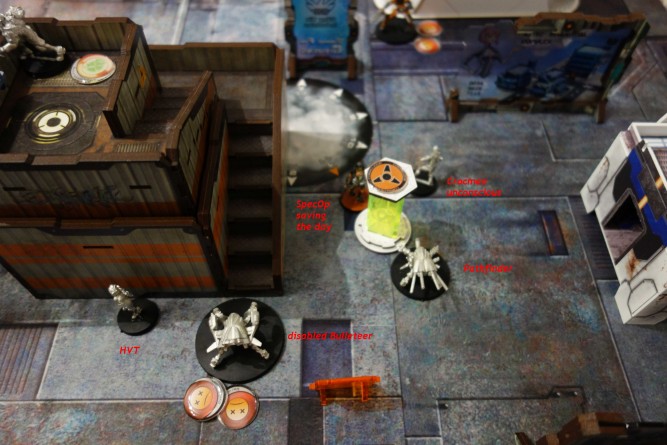 SpecOp saving the day by activating the Console

So in the end it was very close. We both killed the Designated Target and both DataTracker survived.
PanO killed more Target Decoys, but Nomads had more Activated Consoles, so the game ended slightly in favor of Nomads ... 6:5!