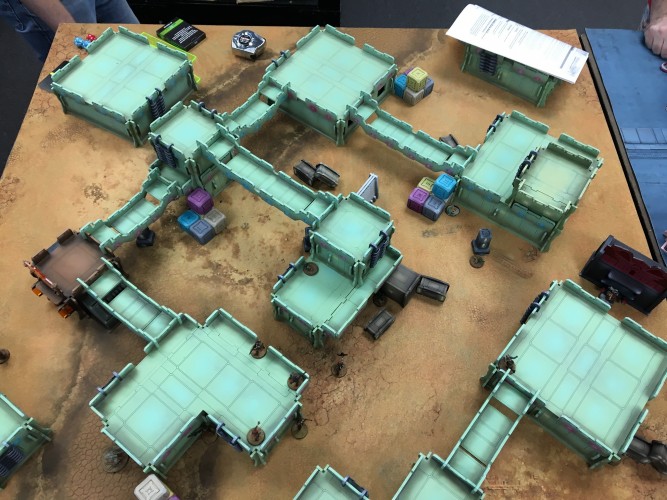 Ground sensors alert Haqqislamite forces that a small Panoceanian force was attempting to infiltrate a barren section of the battery fields. Nearby Hassassin forces repsond! 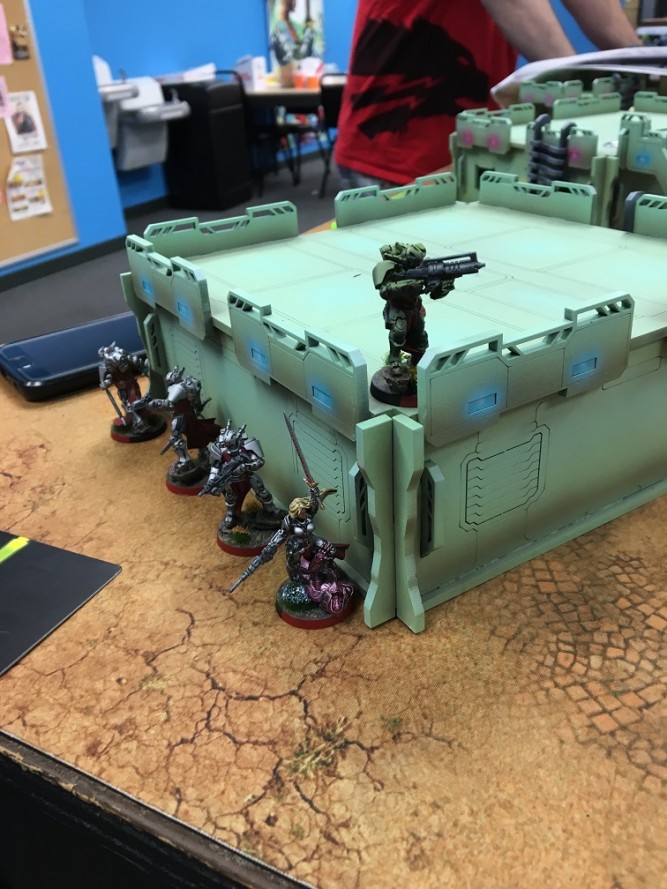 A brutally heavy force of Hospitaller Knights led by Joan of Arc stack up to assault our left flank. 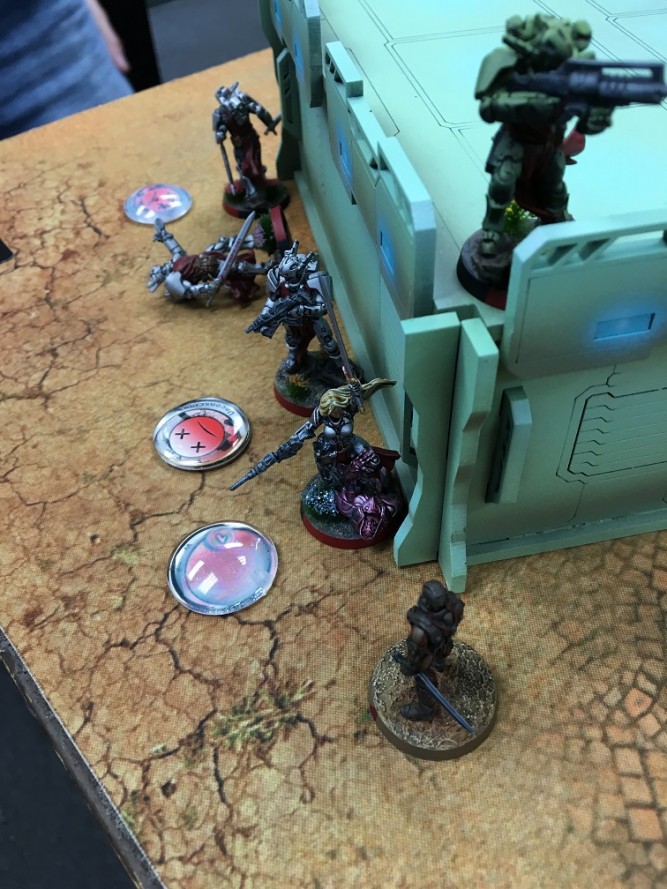 But the team is nearly annihilated by a fiday's mines and shotgun in concert with a pair of brave daylami!

My ad hoc force of ghulams and fidays--lacking our usual muyib support--was all I could cobble together to face off the lighting strike of the Panoceania military orders. The usual muttawi'ah and daylami hangers on were also in attendance. The PanO forces stacked up heavy on our left flank, so I ordered our two fidays to delay them while our ghulams moved into position to *hopefully* engage successfully.

Our first fiday slunk across an opening to lay a mine at the feet of Joan of Arc; a fitting offering for such a one. With the mine in place, the first of our three daylami's rushed forward and fired his panzerfaust at Joan of Arc. The shot missed and he was quickly shot down, but not before the mine peeled large swaths of armor and not a small amount of flesh from the lower four members of the link team. With the team stunned, our fiday layed a second mine, and I once more ordered a daylami to engage the link team. She fired her panzerfaust at the hospitaller on overwatch, but was cut down by his heavy machine gun. However, the team working to assist the overwatching knight moved just a bit too much, setting off the second mine. The hospitaller doctor was felled and Joan of Arc took notable damage to her armor.

With the link team badly damaged but no daylami's remaining, the fiday knew it was his time and leapt out to engage with his shotgun after placing his third and last mine. He blasted the team with twin bursts of his shotgun, miraculously landing both shots and taking no fire in return. Two more knights went down, and Joan of Arc gasped as her enhanced lhost went into overdrive to keep her functional. At this point with the fiday surprisingly still alive, I ordered him to reimpersonate to continue the fight after the inevitable counter attack. 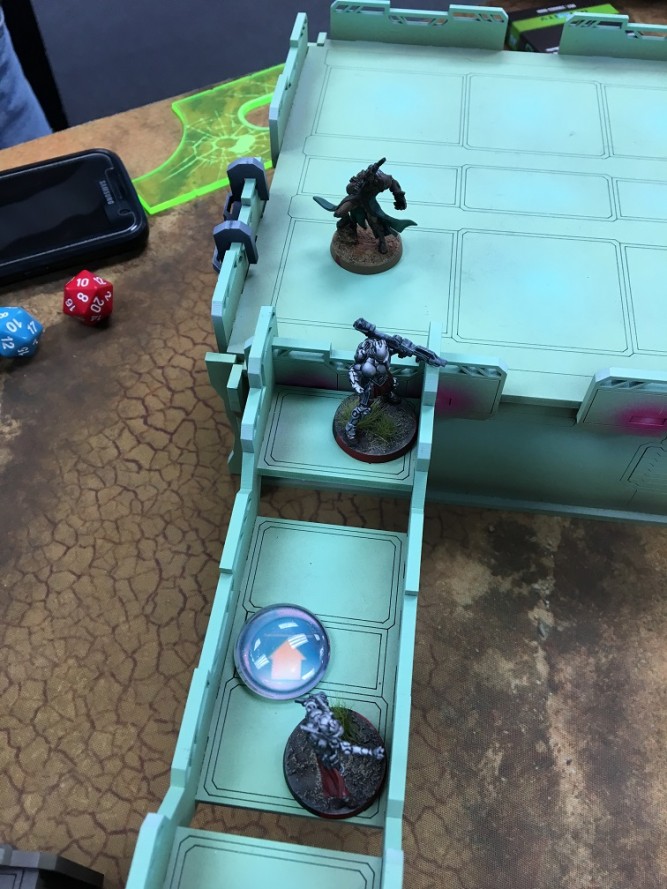 Al Djabel slinks into action, firing his shotgun! And again! And okay a third time! Okay one order sergeant down! 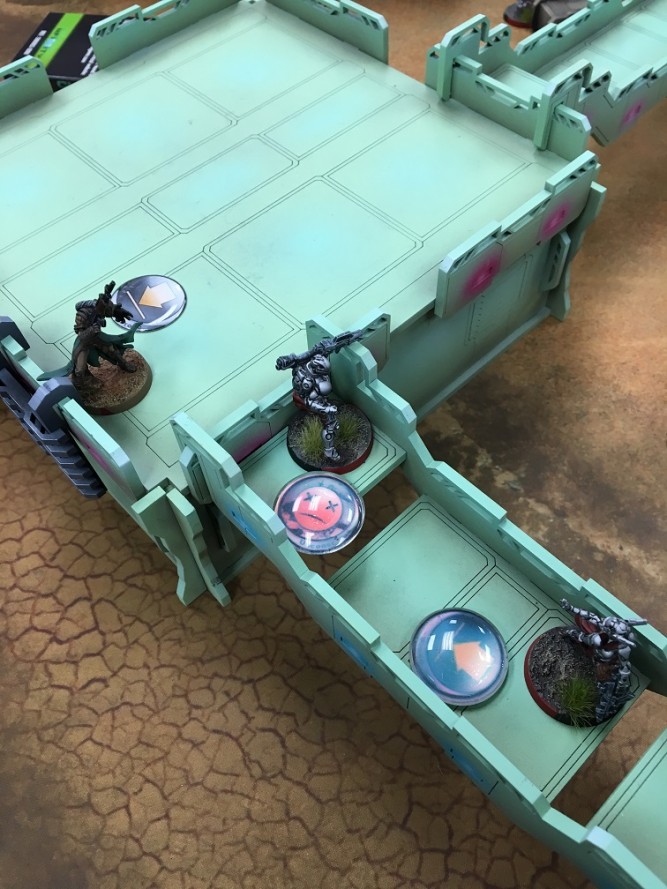 An unhappy AL Djabel ducks into cover to reload after expending his entire shotgun magazine on two order sergeants and only taking one down. 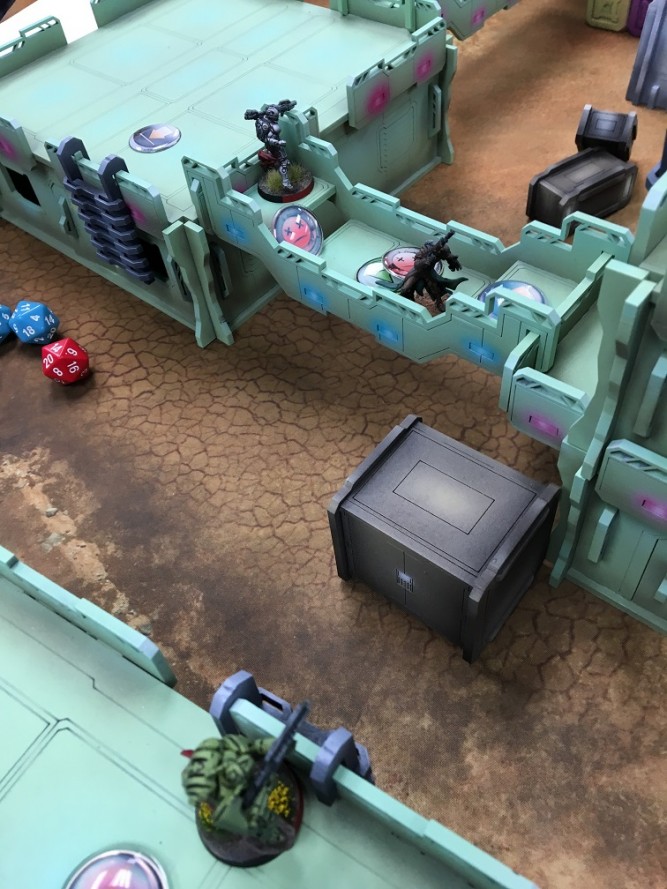 Al Djabel puts some damage on the Hospitaller heavy gunner with his shotgun, but goes down to some slick pistol work from the knight. ...after eviscerating the order sergeant hacker in close combat moments before.

In the middle of the enemy deployment zone Al Djabel lurked, waiting for his moment. When it came, he rose from his concealed position and blasted a pair of order sergeants in the back, covering them in red paint! What?! He fired again! And again! The order seargeants, coated in paint and thoroughly confused, nonetheless stood their ground bravely against the pigmented assault. Cursing, Al Djabel dived for cover and threw away his spent magazine; he had failed to reload with live rounds after his last time through the hassassin training course!

Loading a fresh mag of totally-real-this-time ammunition, he blasted the order sergeant wielding a heavy rocket launcher off of his feat, and then dived in to eliminate their hacker in a haze of viral poison and screams. Rising from his covered position, he went to work against the hospitaller heavy gunner, who whipped out his pistol and returned fire against Al Djabel's shotgun blasts! Several exchanges later the hospitaller was bloodied but unbowed, while Al Djabel slumped to the ground, out of blood and luck. 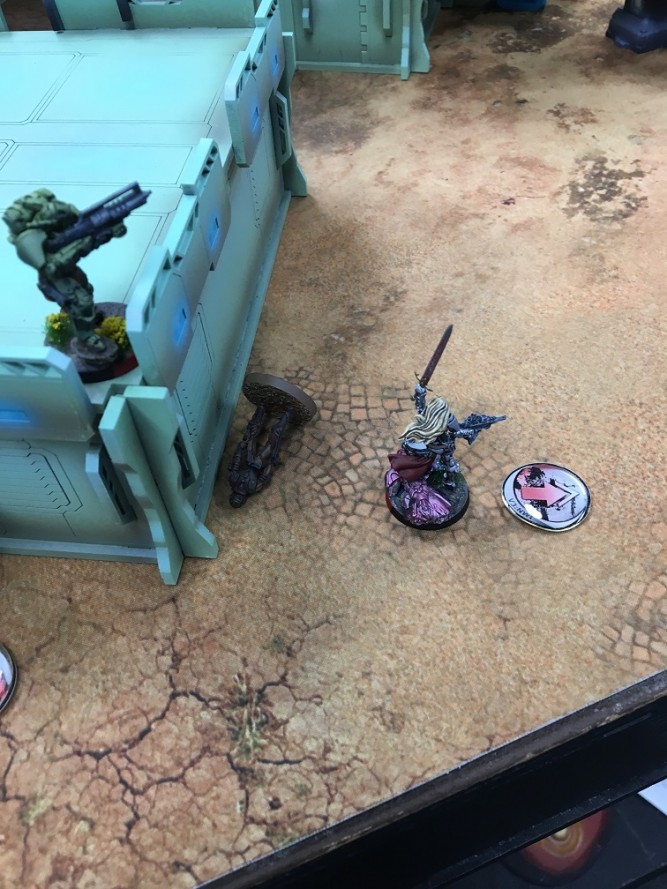 Joan shows no mercy for our fiday, revealing him and gunning him down with a blast of multi-rifle fire. 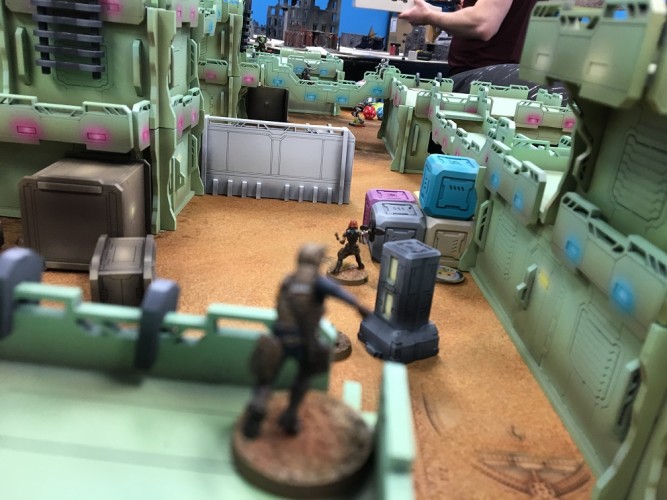 A nearby war correspondent fails to effectively take a picture of the hospitaller HMG. 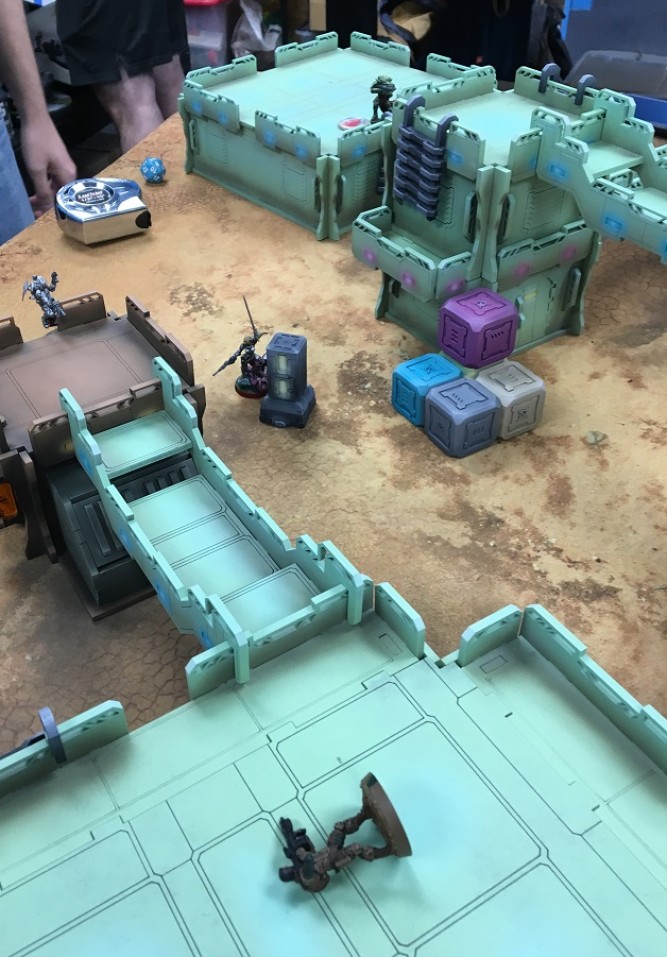 An enemy Crusader drops in and eliminates the ghulam heavy gunner, even as he himself shoots down the last of the hospital knights. 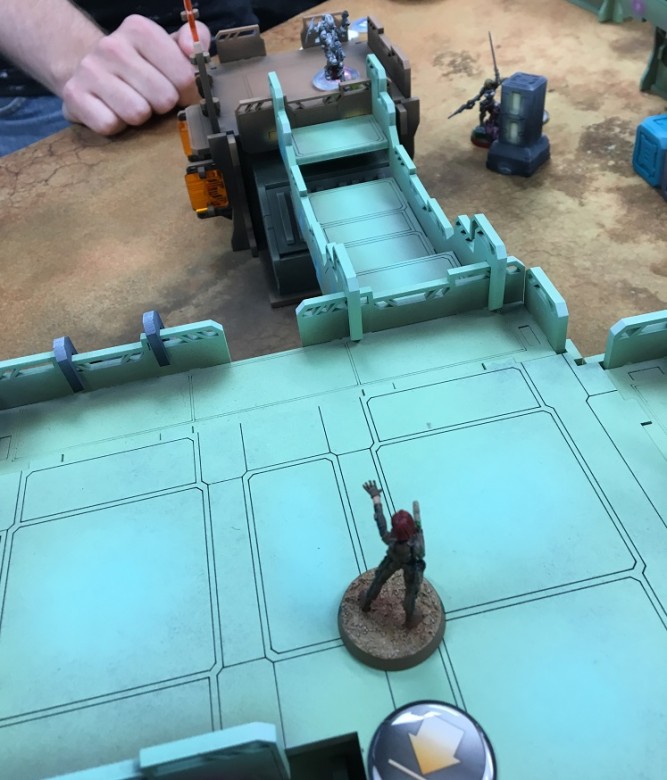 But our brave Ghulam doctor downs the Crusader with her rifle as he advances. 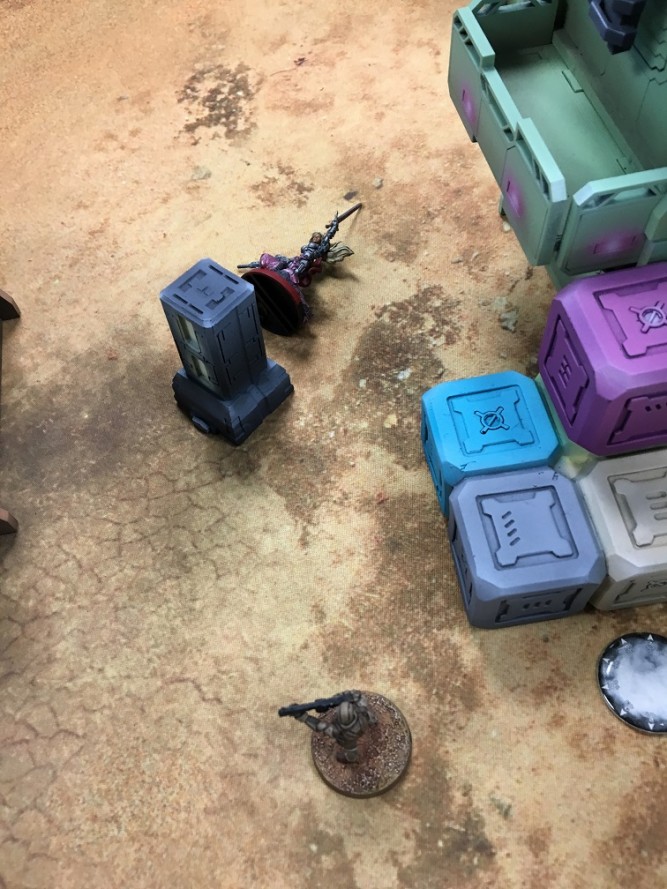 Charging forward at the last moment, I level my boarding shotgun at Joan and remove her from the field with a devastating headshot.

Despite our fidays' victories, the remaining Panoceanian forces struck back hard. Joan of Arc rounded the corner and immediately revealed the fiday on our left flank; she gunned him down without taking damage from his ineffectual shotgun blast. She moved up the field and took cover at the left side communications antenna and dared the Haqqislamite forces to approach, even as a member of the Crusader Brethren dropped from the starry sky and reinforced her close defense.

With three dangerous enemies so close at hand, our Ghulam team moved to attack! The heavy machine gunner managed to down the final hospitaller, but flubbed his shots at the Crusader and took a double action round to the chest, putting himself on the long list for cube resurrection. Seeing an opening, the drop trooper leapt a barrier and charged the remaining teammates, but was in turn shot down by precision rifle fire from our doctor, having focused his shots on shooting down the missiles fired by the launcher of the other team member.

With only Joan of Arc remaining (our muttawia'ah having meanwhile cleared out our right flank), I loaded a shell into my boarding shotgun and charged. Maneuvering to see the enemy hero out of cover, I aimed carefully and fired a pair of shots into her. One shot clipped her armor, but the other caught her straight in the left temple as she attempted to return fire. Her lhost crumpled lifelessly to the ground and I knew that we had won the day. With no remaining Panoceanian forces on the field, we harvested their cubes for repatriation or a suitable prisoner exchange, and consolidated our hold on the battery field that much further.