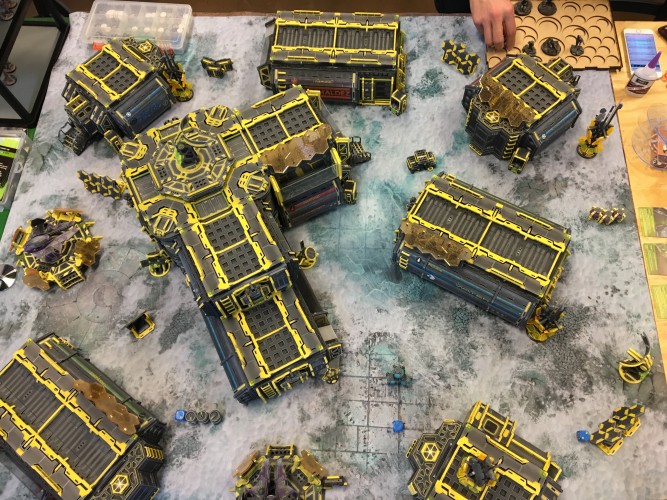 A rare patrol along the surface of Novvy Bangkok leads to a surprising skirmish with the MRRF. 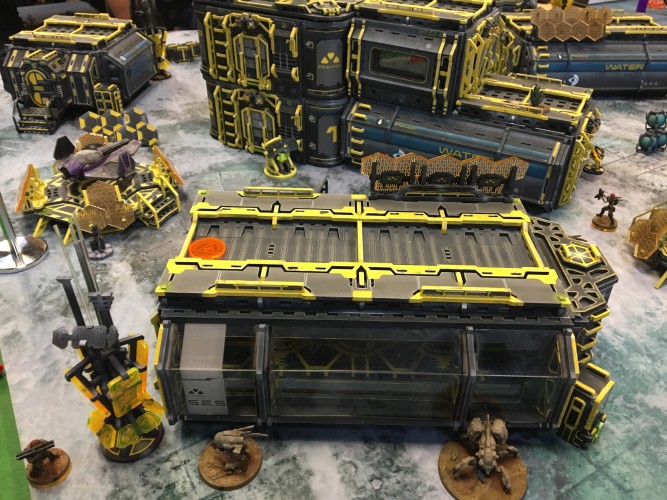 As has become the norm, I lead a group of irregulars and remotes to secure our left flank. 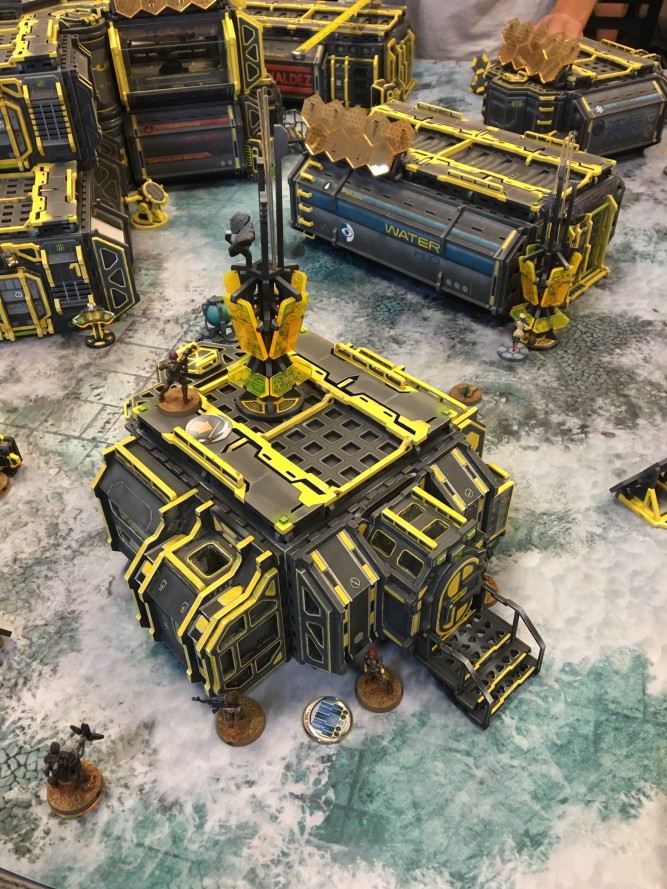 On our right flank, the Ghulam team holds steady. 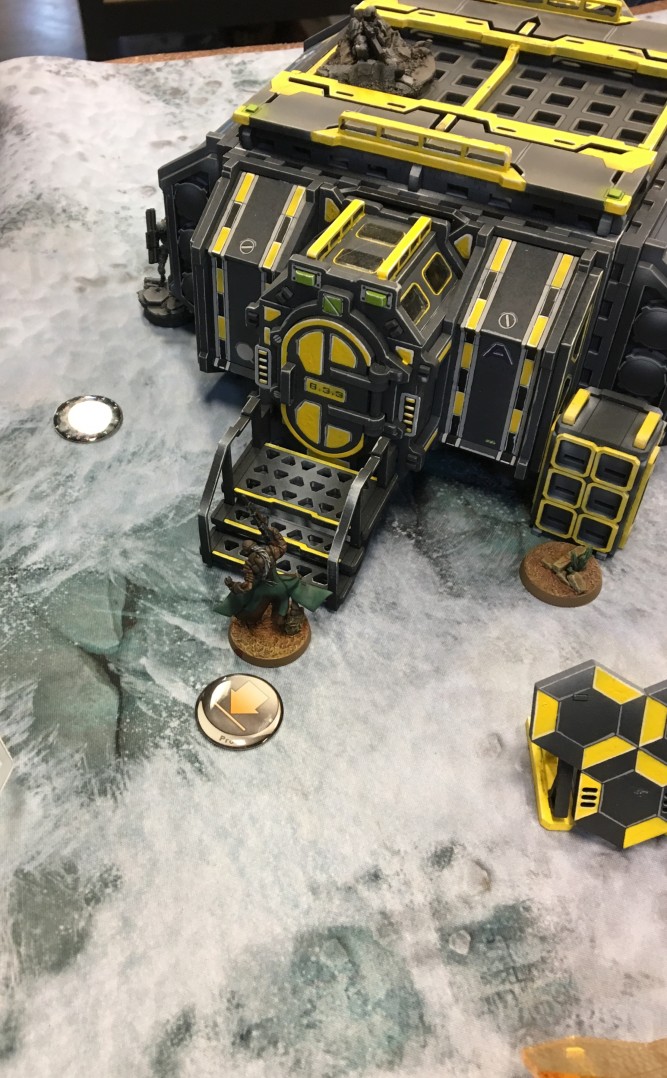 Al Djabel manages to throw a smoke grenade and not do much else. 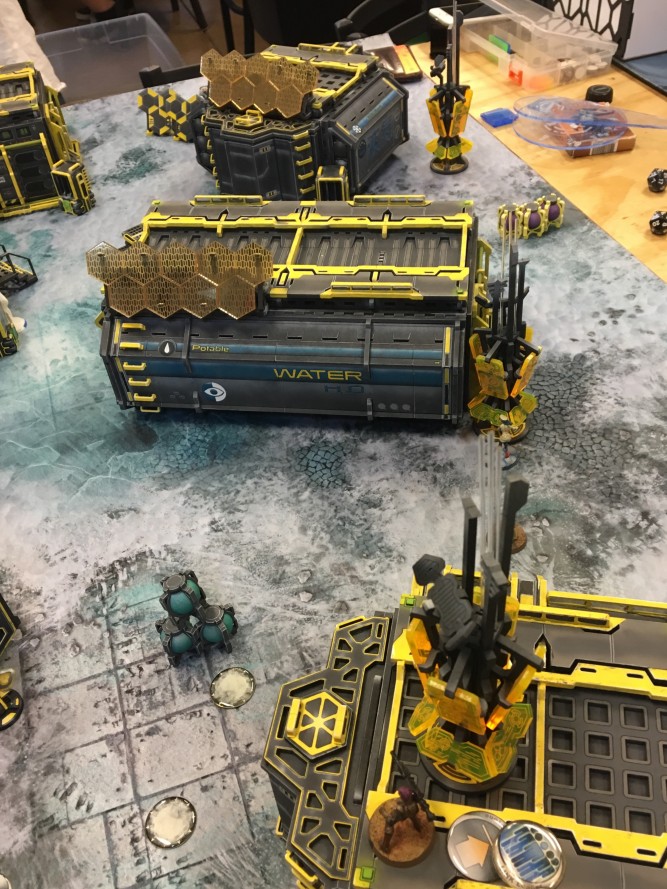 With smoke coverage from our Muttawi’ah, the Ghulam team eliminates the Loup Garou sniper without taking fire from the Zouave.

OOC: I had a chance to get a game in with Imp! from Sweden! We played countermeasures in preparation for Arizona Armageddon IV and had a great time.

With the amount of in system traffic around Novvy Bangkok, patrols on the surface are generally limited for safety’s sake; however, we were nevertheless sent to examine a Liberty Cargo exterior storage location in search of further evidence of Shasvastii infiltration of PanO facilities and organizations. We encountered opposition just as rare as our tasking: The Merovingian Rapid Response Force.

Snooping for unknown reasons, we decided to engage the MRRF before their blundering could destroy vital intelligence that might lead to further understanding of the ongoing conflict. Al Djabel attempted to engage along our right flank, but all he really managed was to deploy a smoke screen an fight two rounds of inconclusive combat with a surprisingly resilient Moblot.

However, our Rafiq was able to scan one of the MRRF analysis through a sensor placed by a sacrificed Fanous, and our Farzan forward observer managed to forward observe the Loup Garou sniper. The sniper was promptly shot down by a pair of missiles from the Ghulam team, but the Ghulam missile launcher was in turn downed by an overwatching Zouave.

With little achieved in our initial strike, the Frenchmen struck back with a vengeance. 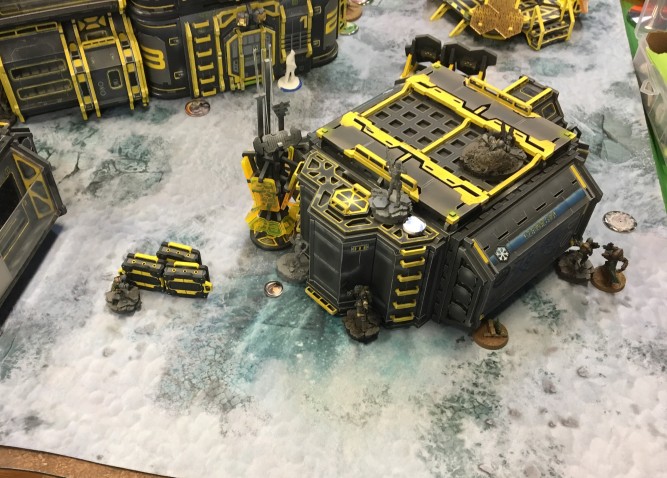 An aggressive daylami recruit moves up but fails to eliminate the 112 or any members of the link. 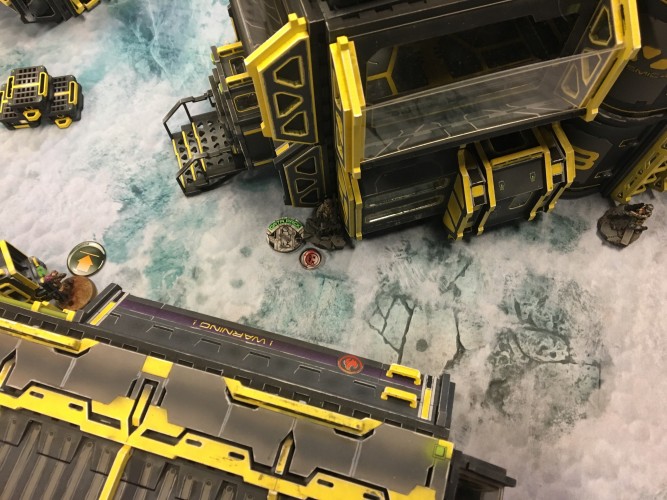 But a second daylami knocks out the MRRF datatracker with her shotgun. 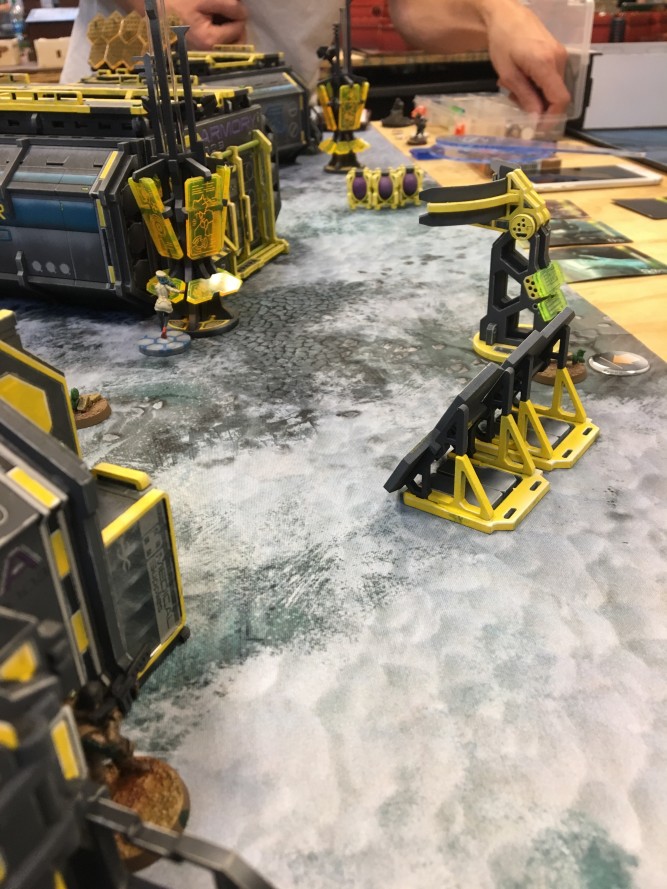 On the right flank the Ghulam team is broken with the death of the missile launcher, but the heavy gunner still manages to down the second of three Loup Garous with a single well-aimed shot. 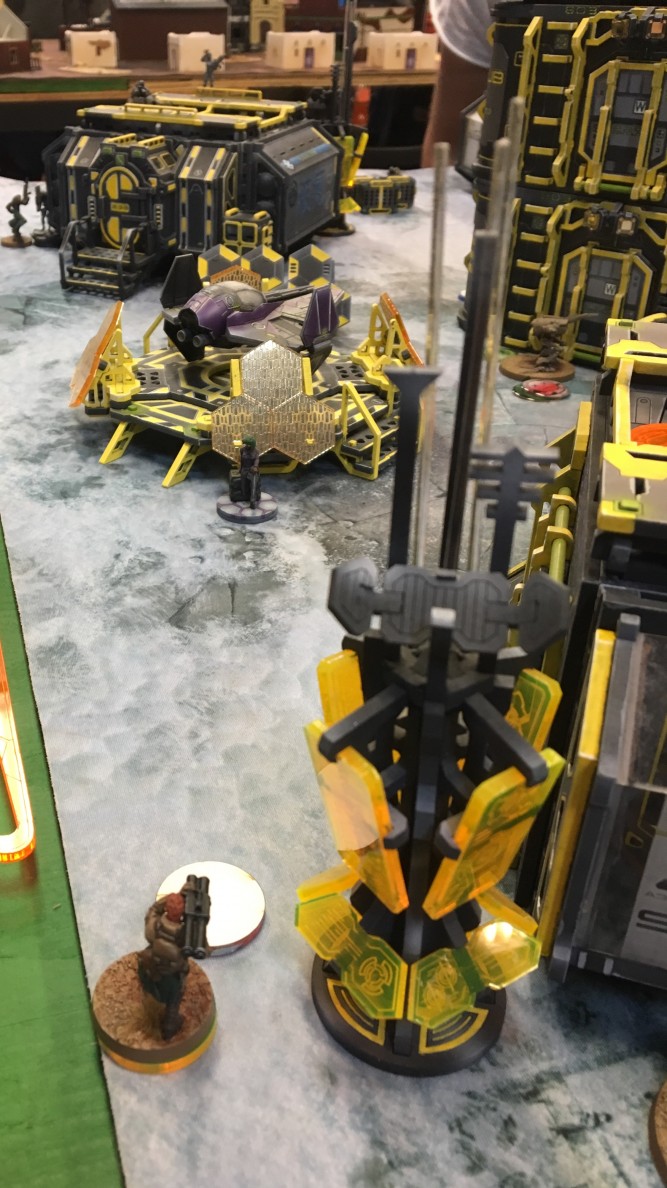 On the right flank, the last remaining Daylami shoots down an entrenched Moblot with a well placed panzerfaust missile.

The fight continued tooth and nail, with no quarter asked or given. Our forces reacted with deadly fire, downing multiple enemy troops and taking minimal but still costly casualties in return. The lieutenant went down early, but I quickly jumped in and assumed command with a minimum of fuss.

Despite being broken, the Ghulam team fought on as individuals, and an enemy Loup Garou went down to a single well placed burst of HMG fire. On the left flank, our last remaining daylami recruit took out an entrenched Moblot with a panzerfaust round that must have been guided by the heavens to find its mark against such intense fire.

The center of the field remained covered by a Zouave sniper, but careful maneuvering allowed is to move around the edges of the fight to accomplish our objectives. I ordered our Ragik hacker to drop in on the right flank, where he mapped out one of the surface antennas and then scanned one of the MRRF civilian attachés for Shasvastii DNA (result: negative). 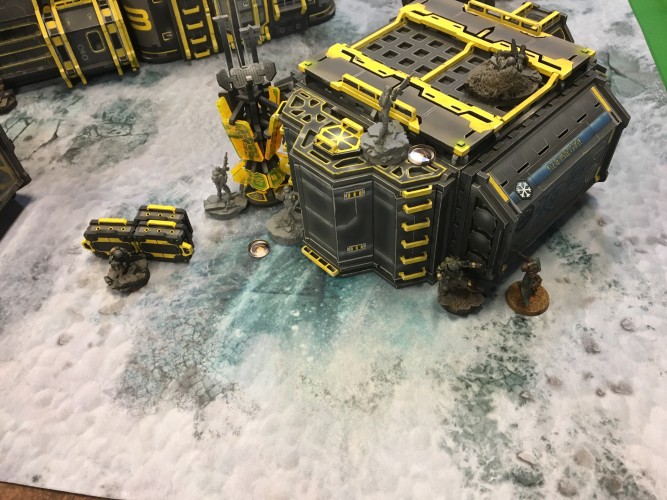 Al Djabel finally eliminates a member of the enemy link team, but goes down to sniper fire. 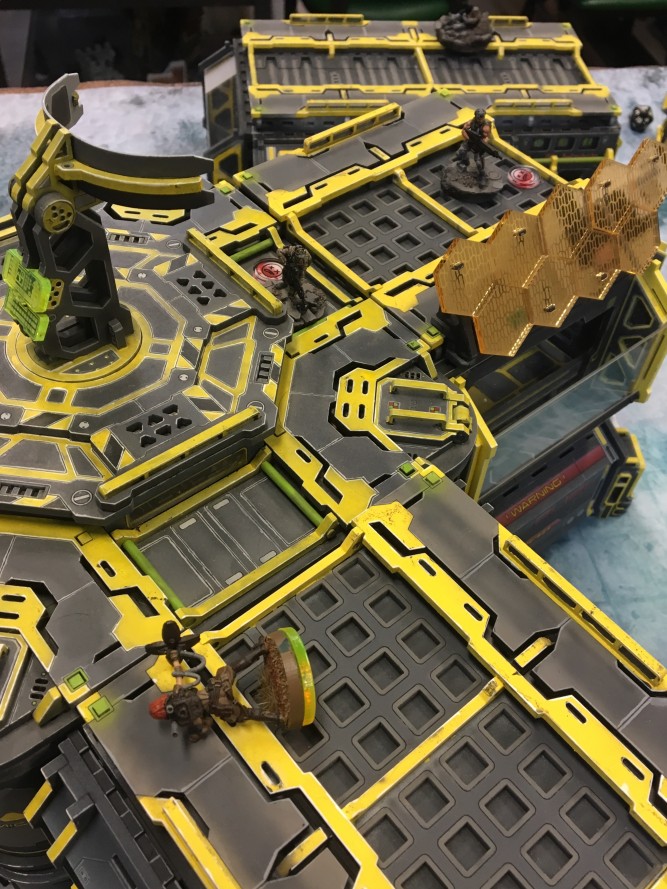 A brave Muttawi’ah sells her life dearly, downing a Zouave and a Chasseur with her chain rifle. 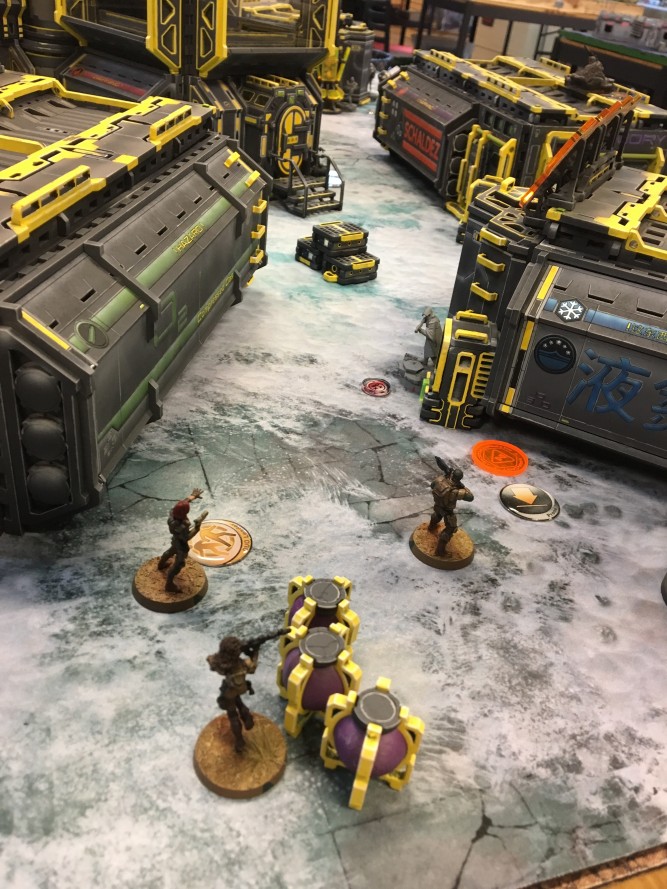 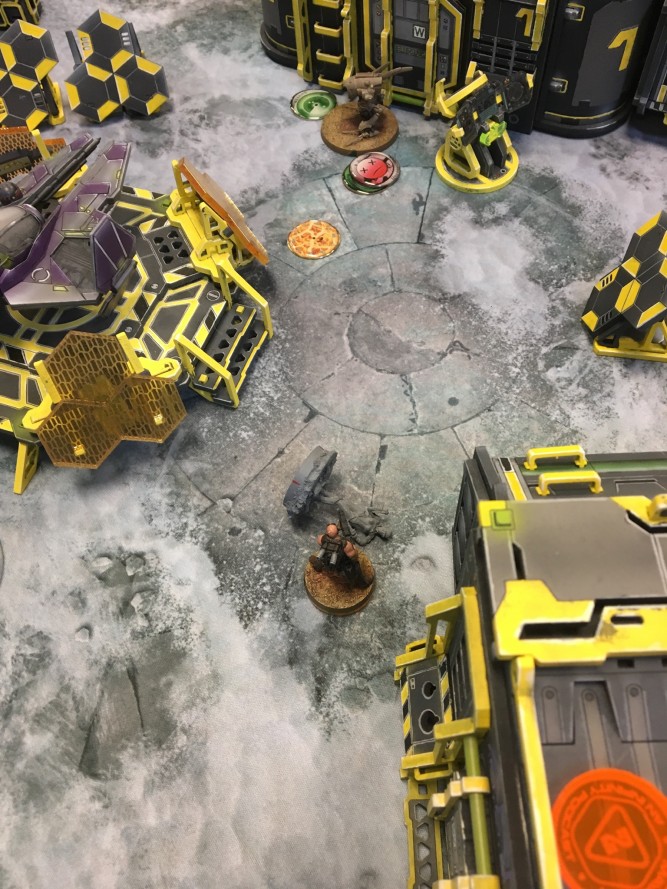 An epic knife battle between the MRRF’s Alguacile hacker and a Muttawi’ah ends in victory for the forces of Haqqislam. 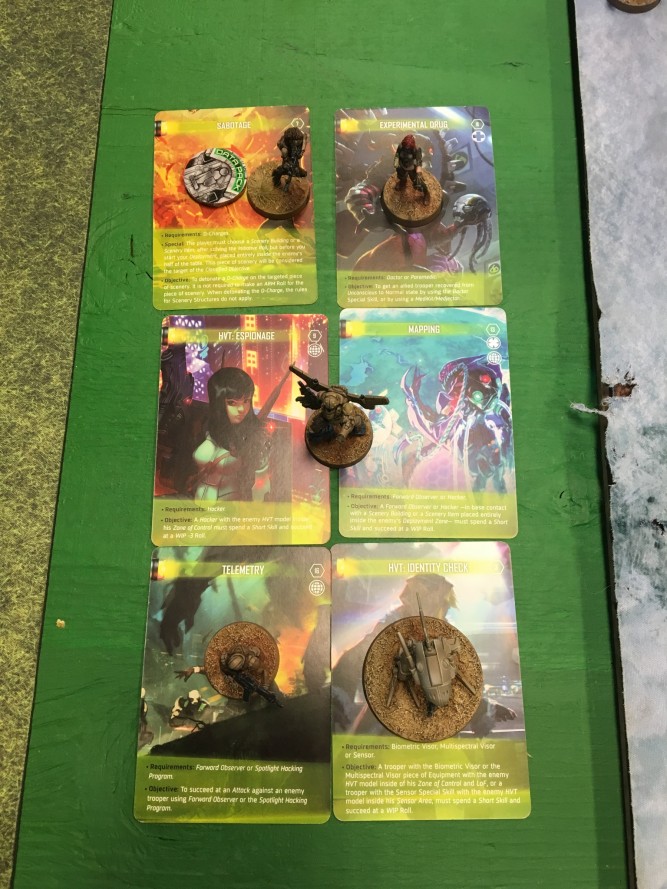 OOC: A finally tally of classifieds.

The battle ended with a surprising amount of mobility. Al Djabel finally managed to eliminate a member of the MRRF link team, allowing it to be further whittled down by the rest of our forces. On the right flank, the Ghulam team charged forward in support of the mission and the recently downed Ragik.

One of my fellow Farzan cleared the way by eliminating the finals Loup Garou with his boarding shotgun, while the Ghulams moved up under cover. The team’s HMG then eliminated the Zouave sniper, allowing the doctor to revive the Ragik with a shot from her medkit, while Husam Operative Leila Sharif managed to detonate a suspicious cluster of purple chemical pods.

With the MRRF badly mauled, they contacted us and requested that they be allowed to withdraw with their wounded. We granted their request and cautioned them against interfering with our investigation. Our dead were collected, and we departed for the somewhat safer interior of Novvy Bangkok with our intelligence in tow. Perhaps the Ariadnans were not the bumbling fools we thought; the data-slates we recovered indicate a disturbing connection between Liberty Cargo and the so-called Shasworth Corporation. This will require further investigation; perhaps collaboration with Ariadna is more appropriate, given our shared opposition to these hideous aliens. Time is sure to tell.