The terrain was rocky, somewhat desertlike, Fatima found it to be favorable for her infiltration. She was one of the three infiltrators assigned to Commander Mustafa’s unit. They were part of Operation Gravity Falls, a coordinated effort to drive out the Combined Army Incursion into Battery Fields and hopefully be able to establish a Qapu Khalqi presence there. The place Fatima infiltrated right now seemed to be completely abandoned, a telemetry and comms center for the Battery Fields, but no ariadnan soul or moving silhouette to be seen, but they knew of a Warcor who also was in the area before it got silent, she might be alive and useful. She just got into position behind a Container, when she heard over the comms: “Contact with the enemy, sniper on the rooftop!” She remained calm and focused on her objective: Make way for the Liaison Officer and secure the cargo area with mines and repeaters. Meanwhile in the distance a shrieking sound came steadily nearer, the shrewd Aliens had Airborne Troopers in reserve. Suddenly a strange feeling overcame Fatima, a feeling that this op will go brutally down the river.
_______________________________________________________________________

Commander Mustafa gained the Initiative, while CA Commander Naidek had the advantage of previous deployment.

The Haqqislam assault started with the two Ghazi running towards the enemy, one of them placed a smoke grenade right in front of him, blocking the sight of the enemy Rodok, the Maakrep Tracker (still able to see him) shot but missed. The second Ghazi slipped and failed to place a smoke grenade properly. They both rushed on each taking a hit from the Maakrep, but being dogged as they are they rushed onwards and tried to Jam the comms equipment of the umbra legate. They failed miserably and got quickly shot down by CA forces. Meanwhile the Az’rail trooper and Kaplan Engineer moved forwards, taking cover behind the central building. Husam Leila Sharif tried to activate a Cybermask program, but it turned out she had a system glitch in her KHD, so nothing.

The Khawarij with the Mk12 made quick work of the Maakrep Tracker, turning her into meat paste before moving on to the central building unsing his Super Jump. Fatima the Hunzakut places a camouflaged mine in base contact with herself, before moving from on container to the next. Immediately after she places a repeater and continues moving along the container. The other camouflaged trooper (the Al’Hawwa Hacker) is slowly moving by the fuel tanks on the east side of the table. Finally the Khawarij with the Mk12 moves onto the steps of the central building, facing towards the haqq deployment zone.

The Cadmus drops onto the battlefield with his decoys, the Barid tries to hack the dropship, but the alien Firewall is too strong. But immediately after landing, the Kaplan engineer discovers the real Cadmus, while the Khawarij turns towards the dropsite. Just after the first Airborne enemy, another much more fearful fiend is landing: Ko Dali. The rogue human lands, getting only the attention of the Az’rail, who turns towards her. Then Ko Dali began to raise hell, she sucessfully shot down the Az’rail, Kaplan and Khawarij in one Action, by splitting her burst with her 2 Assault Pistols. But while doing that, the barid successfully marked her with a spotlight program. Then the Cadmus Morpho-Scans the downed Khawarij, gaining the secrets of Runihura. Ko Dali moves south, firing at the barid, who (due to luck and Ko Dali’s targeted state) manages to drive her back with his pistol. The Cadmus moves into the direction of Leila Sharif, who tries to kill him with a Skullbuster Program, but gets downed by the Cadmus’ Maestro Program. The second Rodok (on the west side) uses Super Jump to cross the container in front of him, but takes a surprise shot from the Tuareg at the top of the southern watchtower, dying instantly due to the shock ammunition. Finally the Cadmus moves towards the garage, downing the Ghulam FO in the process.

Fatima moves along the container, peeking out of the cover to shoot at the Nox Trooper, who scores a hit on her while shooting back. The cover takes the brunt of the hit and Fatima survives, but loses her cool for a moment and bolts back behind cover. Quickly regaining her cool, she turns around to face the Nox, scoring a headshot (Crit!) and one in the chest, killing the Spawn Embryo. The Ghulam Lieutenant uses his Lieutenant Order to move towards the edge of his cover to shoot at the Cadmus, who in turn scores a Crit on the Ghulam, downing him instantly. Meanwhile the Ghulam Doctor moves to the edge of his cover and blasts his underslung shotgun at Ko Dali, killing her instantly. Afterwards he moves further along the building towards the stairs, and tries to heal the Kaplan with a MediKit, he hits but the Kaplan is already dead. The camouflaged Al’Hawwa moves towards the eastern comms center, to maybe capture the second antenna, but gets discovered by the Rodok and the Shrouded (who with this reveals himself) on the central Building.

The Tuareg shoots, splitting her Burst between the Rodok in the apartment building and the shrouded, no one hits. The FO Khawarij jumps onto the western comms center and shoots his underslung shotgun at the Cadmus, he hits but the Cadmus succeeds on his ARM-Roll and Guts-Roll.

The last of the Airborne Troopers arrives, a rogue Tohaa, a Fraacta. Again the Voodoo-Tech Firewalls prove too much for the Barid and the Fraacta lands on the Bunker next to the Watchtower. But in a moment of luck the Tuareg managed to score a crit on the Fraacta as an ARO, forcing the Drop Trooper into Survival Mode. The Fraacta then shoots, splitting her burst between the Tuareg and the Ghulam Doctor. She hits both, both succeed on their ARM-Roll but fail their Guts-Roll, forcing the Tuareg to go prone and the Doctor to seek partial cover behind the balustrade of the stairs to the topside of the building beside him. The Cadmus takes Leila Sharif’s Marksmen Rifle form her unconscious body, hoping to gain an edge by it, but taking a lethal blast of buckshot from the Khawarij behind him. The Shrouded moves up to the top of the central building into base contact to the Tech-Coffin, provoking a shot from the FO Khawarij which misses wildly. The Rodok in the apartment block uses his Lieutenant Order to get inside into total cover.

Fatima the Hunzakut – having lost comms to command like the rest of the survivors – moves out of cover so that she gets a LoF to the Shrouded by the Tech-Coffin. She tries to shoot him, but fails miserably. The Barid moves to the edge of his cover and shoots at the shrouded, scoring a critical hit, downing the stealthy alien. The Ghulam Doctor (still engaged in a firefight) tries to shoot the Fraacta but takes one in the lung and goes unconscious.

The FO Khawarij moves into base contact with the western antenna, but fails to activate it. The Tuareg stands up and splits her burst between the Umbra Legate and the Fraacta, the Legate Dodges, while the Fraacta gets hit. The rogue Tohaa barely survives and succeeds on her Guts-Roll.

The Fraacta shoots, splitting her burst between the Tuareg and the Khawarij. She manages to hit the Tuareg who succeeds on both ARM- and Guts-Roll, continuing to stubbornly aim at the Fraacta. The Fraacta shoots again, but her luck has run out: She takes a crit from the Tuareg and a Wound from the Khawarij, falling dead immediately. Meanwhile the AutoMediKit of the Shrouded activates, but the Alien is too gravely wounded and bleeds out. Finally the Legate moves and tries to dodge the ARO’s by the Khawarij and Tuareg, all involved fail their rolls.

Fatima sighed, it was over. A disaster, but a successful disaster. CA forces were retreating, as they had lost field control and their drop party was wiped out. Only four survivors on haqqislamite side, one Hacker, one Engineer, one Doctor and many more were lost. And to make matters worse: The Intel that they were able to gather was mediocre at best and they failed to find the missing Warcor (assuming her death). Maybe they could salvage some more data, but only if reinforcements came soon enough to give them a window. But she made it, she thought to herself and the survivors of this battle were basically predestined for a raise, or promotion, or both. So maybe, it might not be as bad as it seems. 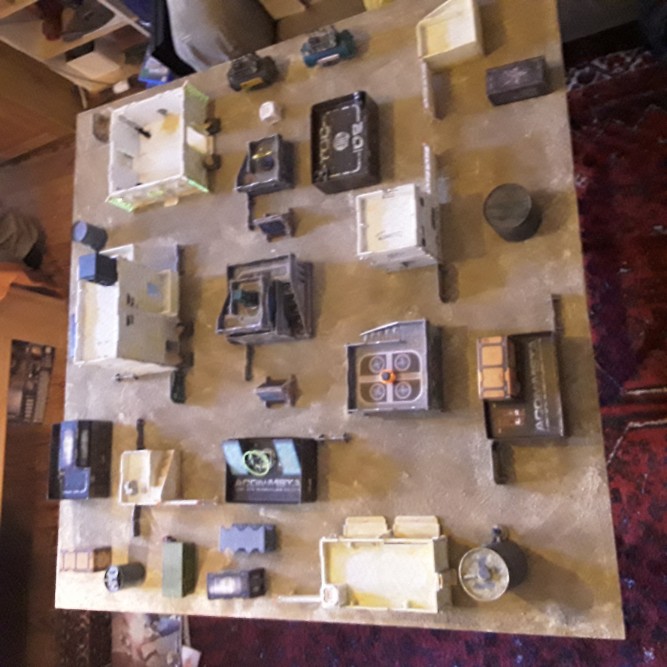 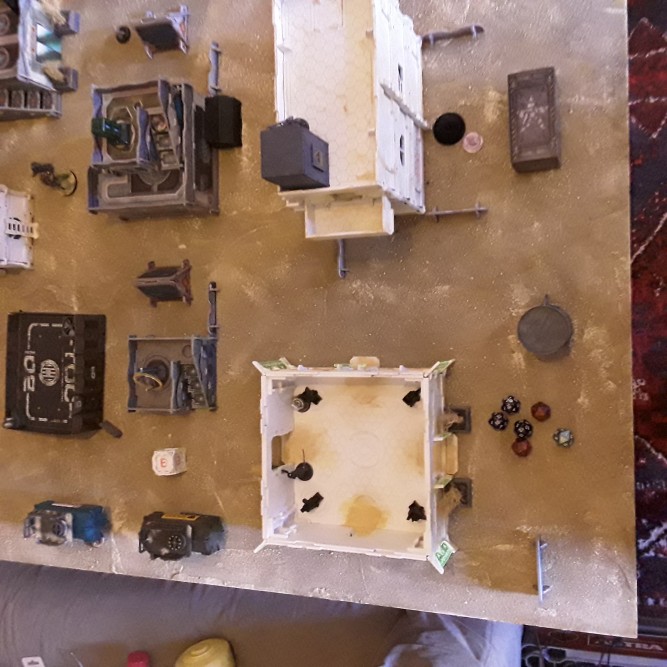 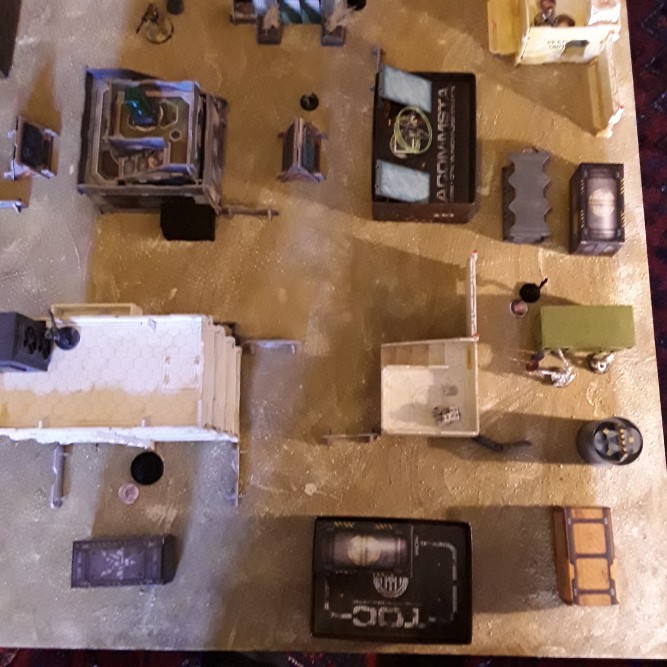 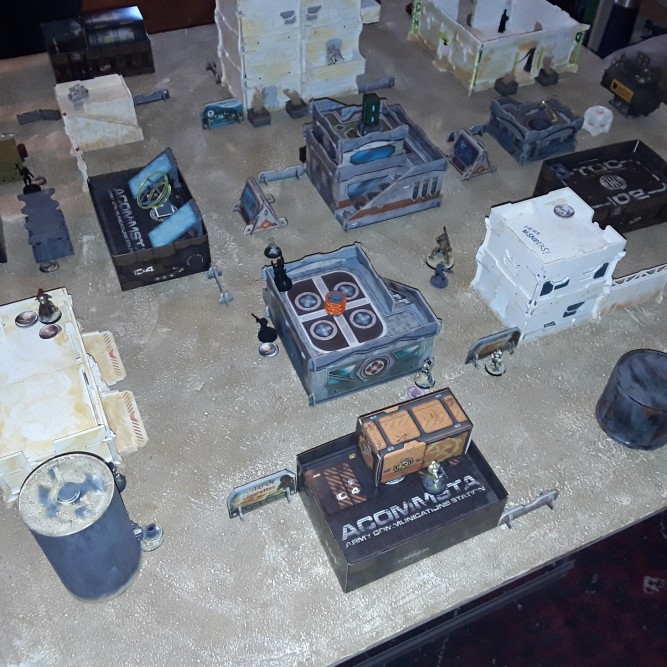 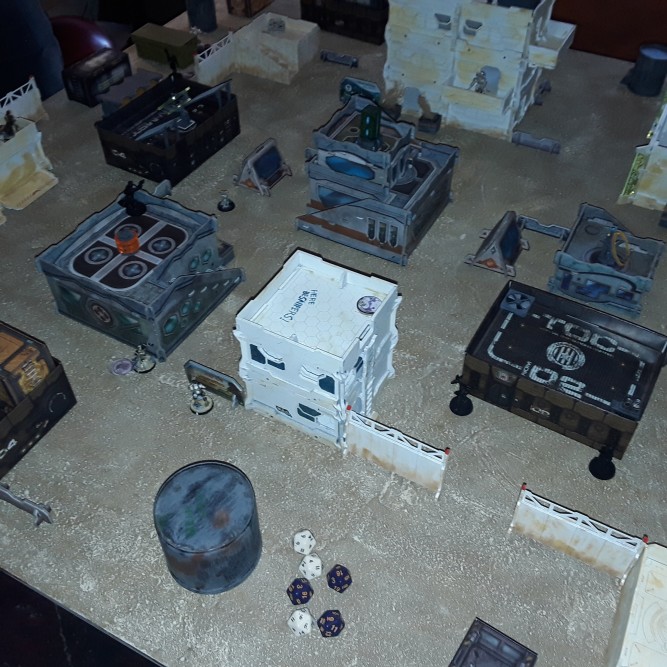 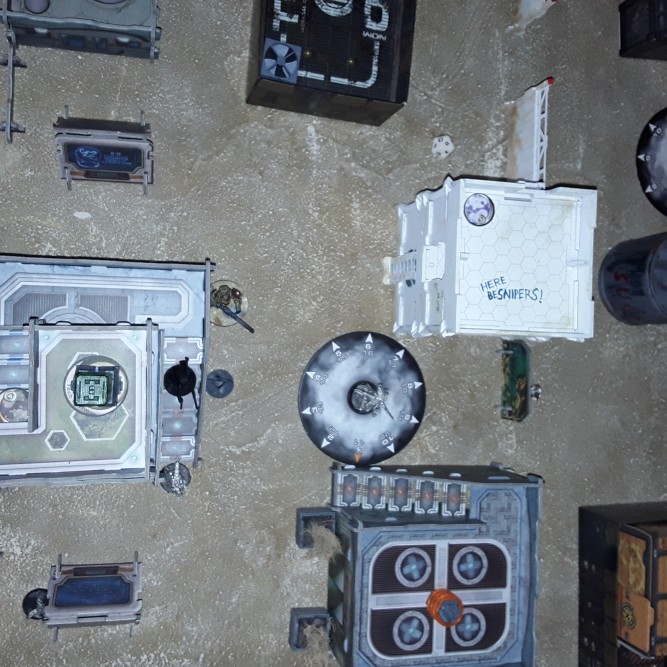 Mere moments before the carnage. 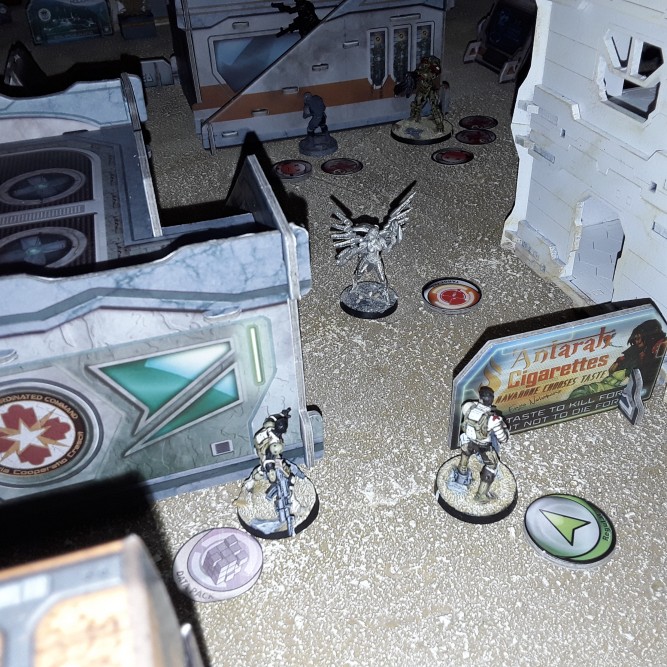 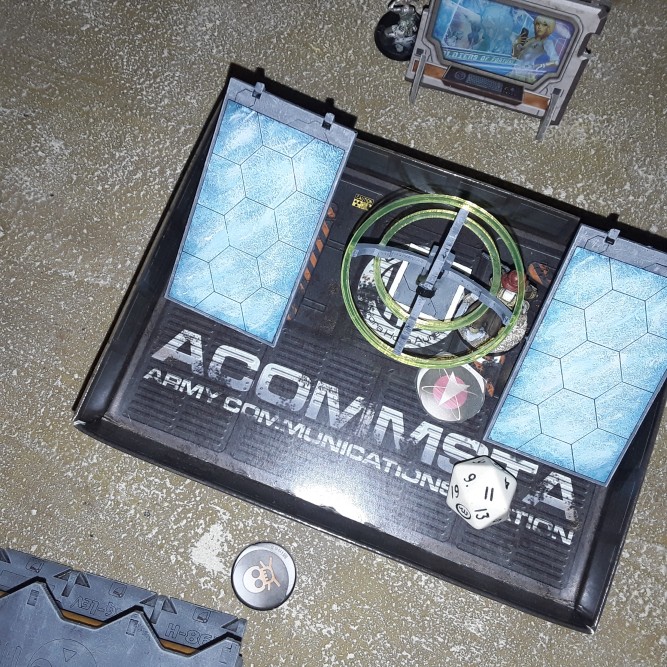