Intro:
„The Mission supposed to be an easy training-like Mission for our new recruits from Bakunin. Walk in, collect some intel and stuff and go home. Nice and easy. All went as planned until we arrived the exfiltration-zone Bravo. Our shuttle for pick-up got shot and had to made some emergency repairs before it could lift-off again. The hired mercenaries of he Dahshat Company had set an ambush for us with heavy weaponary. Someone really was after our intel and paid a good price because nothing less than a TAG greeted us. All the sudden the Mission was a lot more complicated.“
Undercover Supervisor – Codename „Rico“

N7ght won the initiative-roll and decided to go first. I choose deployment and deployed second.

Round 1 Nomads:
– Morlock tried to lay a smoke-screen but failed and got shot by the Maghariba Guard.
– The Überfallkommando suppressed the extremely impetuous order. With their irregular order the Pupniks went into CC with the Maghariba and roled a critical hit but failed the following CC and died one after another.
– The Rev. Custodier tried to shoot a Pitcher close to the Maghariba but missed the Zuyong ML and died in the process.
– Moderator MSR tried to kill the Zuyong ML. First shot was a draw. Second shot failed and she died. No luck on my side.
– Chimera climbed along the wall and attacked the Maghariba Guard successfully.
– The already discovered Zero KHD killed his Rafiq Remote.
– My surviving Morlock desperately moved forward and throw smoke to close the LOF of his Zuyong ML. His Hunzakut (Forward Observer and his Liaison Officer) left his Camostate. Next he tried to kill the Hunzakut in Close Combat, but failed and got shot by his Zuyong ML (smoke didn’t cover the last part of his attack-move) while engaging the Hunzakut.

Round 2 Dahshat:
– His Hunzakut moved forward and did a surprise shot in the back of the discovered Zero with bad range. The Zero survived but failed a change facing. The Hunzakut moved a bit forward to get a better range. This time my Transductor Zond could aro. The Hunzakut divided his shots and killed both. Next the Hunzakut discovered my second Zero (KHD) and killed him too.
– On my right flank a Bashi Bazouk parachuted in the field next to his Maghariba Guard and fired at my Chimera, who was still in Close Combat with his Maghariba Guard. My Chimera got killed. The Bashi Bazouk moved in a good firing position and put on suppressionfire and Holoechos.

Round 2 Nomads:
– I moved all models of my 2nd Group in Group one and had 6 (7 with my Meteor Zond) Orders left.
– My Taskmaster tried to kill his Bashi Bazouk (divided shot on all Holoechos) but he saved his ARM-roll. The Taskmaster tried again but failed again and the Bashi Bazouk went prone.
– Meteor Zond jumped in. With her next order she shot at the Maghariba Guard and killed her (lucky hit!) Next she tried to kill his Bashi Bazouk but got killed instead.

Round 3 Dahshat:
– He moved forward with his Zuyong HMG and tried to secure my HVT. His Dozer also moved forward and secured his own HVT.

Round 3 Nomads:
– My Zero Forward Observer (also Liaison Officer) moved in firing position and did a surprise shot at his Zuyong – 1 wound. With his next order he killed the Zuyong.
– With my last Command Token my Taskmaster moved into midfield and my Moderators moved in the Sector in front of my Deployment Zone.

An expensive victory for my Nomads! 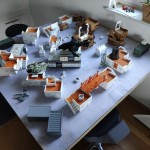 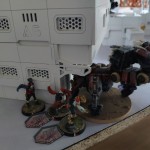 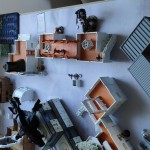 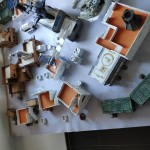