The game was last thursday in our local gaming store.
My Jurisdictional Command of Bakunin VS. his Ramah Taskforce, 300 points.

His first turn:
With his Khawarij MSV L2 and Mk12 he killed my Riot Grrl. He brought 2 AD troops and killed my Zero FO. I managed to stun his Carmen Johns and killed Batard. After his initial kills, my troops survived nearly all his attacks. Until his last order. He killed my Moderator Lt (bad deployment on my part, I thought he was inside a building, but didnt noticed the opening on the other side. I was in loss of Lieutenant in my first turn.

My first turn:
I killed his 2 AD Troops (1 with my Daktari, 1 with TM) and my Überfallkommando killed his Namurr with Spitfire. My Moderator MSR killed his Carmen Johns and got shot. Also, I managed to grab 2 Antennas.

His 2nd turn:
His Khawarij killed nearly all my troops. He grabbed 2 Antennas.

My 2nd turn: Retreat! I had just 1 Transductor Zond and my Moderator Paramedic (Lt.). Also 1 Meteor Zond (jumped in, failed her PH-roll and got shot). The game after this turn. 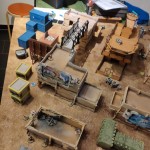 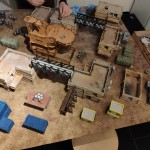 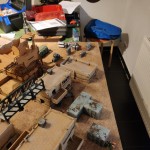