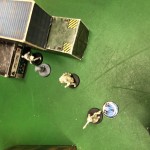 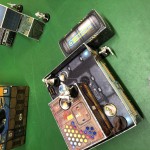 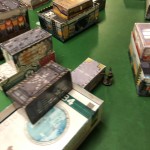 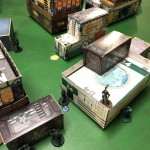 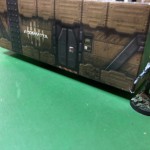 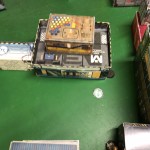 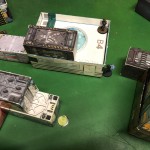 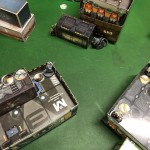 So, this is the first time I meet UsAriadna with my Spiral, they've a lot of flames and I've a good number of simbiuont armour, but no one with more than 1 wound.
I loose the initiative roll but my opponent decide to go first, so I decide the side and to deploy for second, this last choice give me a great advantage and you'll see.

After the deployment phase that was really long, we start our first campaing match.

I could reassume UsAriadna turn in : we have tried. I've two of three HF Grunts in my face, but my friend has a lot of ARO and no easy targets, his linked sniper is the only one that could kill something but the advacend link has a mine near two linked grunts.
So, the first is the maghty Molotok Unknown ranger that discover one of my camo helot, after, my little alien crits and the soldier dies. One of the HF grunts moves but another helot is ready, this time I use the sumbamchine, the flame is too far and the enemy is unconscious, at this point, the link moves and dodges the mine, no one dies, after, the linked sniper shoots to one of my helot that dies, but its next target, my linked Taagma sniper, kills it. Now it's Van Zabt time, but the veteran isn't incisive, my surda dodges every shot and after, other actions, the bald man is killed by chaksa HF, I loose my beast but I was really lucky. A FO forxtrot takes a panoply and kills my last helot and the new link leader, the minuteman HMG, kills my poor Taagma sniper, but after, the last HF grunt is killed by my linked Rasail that is far enough from the flame.
My deploy saves me from many dangers, I use my tricore link to bring death to everything. My first target is one of the linked grunt that dies, same fate to another one, Draal with BS 19 is amaazing. After, I discover another Foxtrot that suffer the same fate. In the other group, my Rasail moves and with the flame of its chaksa and its viral rifle, the minuteman HMG goes to hell. After many attemps, the Ras kills also the foxtrot FO, I use my last orders to take at least one panoplies.

My friend has very little to do, I killed all of his offensive models and I've all of my heavyweights on the battlefield. He tries to kill my Rasail but without success, my model remains with one wound but another foxtrot is killed, I loose my chaska peri but another HF grunt dies.
The second is at this point my last round, I use my Kiutan to complete the opera. The 112 and the last minuteman that is obviopusly the Lt. die. With my many orders I take other weapons in the panoplies and I compete a classified objective, I'm not able to do the other one. We end the match, 9 to 1, 'cause USArianda complete one classified.

Some considerations, my friend had not played for several months and deployed and aggressive list for first, giving me a way to effectively counter his offensive, with a good luck and a devastating response in my first turn, the victory was assured quickly.