The enemy was at the gates.

yu-Wen`s had done a fantastic job of isolating and picking off the different forces that had been hunting for a weakness in the defense of Jiyuan but something had undermined their efforts. His bloodied face was just starting to swell as he finished giving his instructions to one of his best Kanren agents. The rest of the team looked on and waited. They took no offence to being kept in the dark. They could smell betrayal as clearly as Yu-Wen could.

Yu-wen had woken to the sound of the level five alarm. Someone had infiltrated the operations hub. Without thinking he rolled out of bed and reached for his pistol only to receive a shooting pain that rushed up his arm.

As his own blood drove off the last vestiges of drowsiness as it splashed across his face he shifted his wight while grabbing the arm that was busy withdrawing the blade from his flesh.

Is moments he was grappling on the floor like he had in the military academy many years ago.

Blows flew and his survival balanced on a knife edge -leiterty- several times. It was all a rapid blur till the snap of a neck and the vibration it sent threw him acted like a pause button.

For the first time he was able to look around the room to see the blood pooling by the door.

Looks like his guards had not been so fortunate.

And then he took a good look at the form he sat atop. It looked to human till you reached its jaws what split its cheeks to reveal a mouth form some shitty horror movie.

There was no time to fall into the euphoria of escaping death.

“Give me a fucking up date. NOW” he checked his arm and then shifted his weapon to his off hand. “And send a clean up crew to take this Shavastii slime off my floor.”

“Sir we have confirmed Ikari activity in a number of sections and some unconfirmed sightings of Shavastii in chaos.”

“Send me the quickest route to the closest hot zone”

As Yu-Wen marched down the corridors he gathered the shocked Yu-Jing forces who fell in line. The fighting was intense. Yu-wen had had no time to don his armour so he had to adjust to his lack of raw power. That and his damaged arm meant a set of heavy pistols were the best he could handle.

“Control. How the fuck did this scum bypass our defenses?”

“Commander. The records show that docking bay 6 was taken off the security grid before being opened 72 minutes ago.”

Already on it sir.

“We have out man 2nd Lt. Xuehua Peng was the only personnel who could possibly been in the right place to open the bay”

“We have his current location, but we have a problem sir.” he appears to be heading for heading for a group of Tartary forces who have been waiting just beyond the facility.”

“Arianda What hell are they doing helping Ikari?”

“Ariadna high command has confirmed that unit has gone rouge. They sent intel with suspicion that they may have been compromised by the CA”

Commander do you want us to call and aerial bombardment?

Yu-Wen thought of a moment. The possible intel opportunity was to high to waste but he needed a way to hold them up. He needed to give them a target the CA would not be able to resist.

Zhanshi Lt. Hou Yifan had her orders. She was to take her directions from the Kanren on an “Accidentally” unsecured comms network. They were bait pure and simple.

Yifan did not know how to feel when she got confirmation that the Tartary forces had taken the bait and were heading for her teams location. Pride and fear of being called upon for such a task were a mix.

It was not long till the fighting started.

With her forces in position Yifan`s team waited to absorb the first waves of attack before help arrived. To much of a show of force would not have worked . they had to look like a vulnerable target.

It was hoped that the Tartary would go directly for the location of the decoy Yu-wen but they were smarter than expected and first attempted to move in on her position to take out her and the Kuang-shi team to cut off the chance of a counter attack.

When the biker raced forward he survival hinged on a single burst of fire form the Ruishi REM.

Lucky it hit true and wounded the biker who shifted her attention to the REM and was gunned down as her chain rifle put it out of action.

Quick on her heels was a Strelok who set up heavy fire to pin down the light forces on the eastern flank. 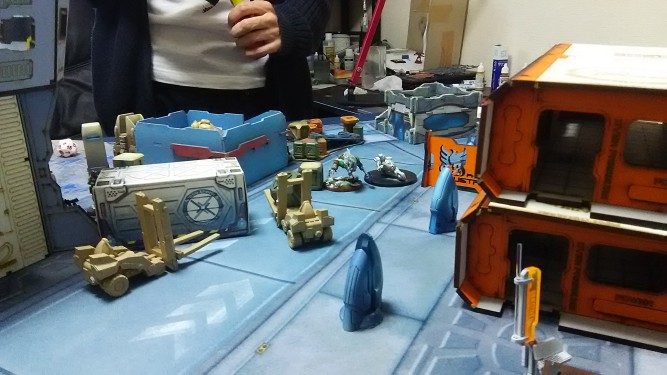 The biker attempts a lighting strike/ 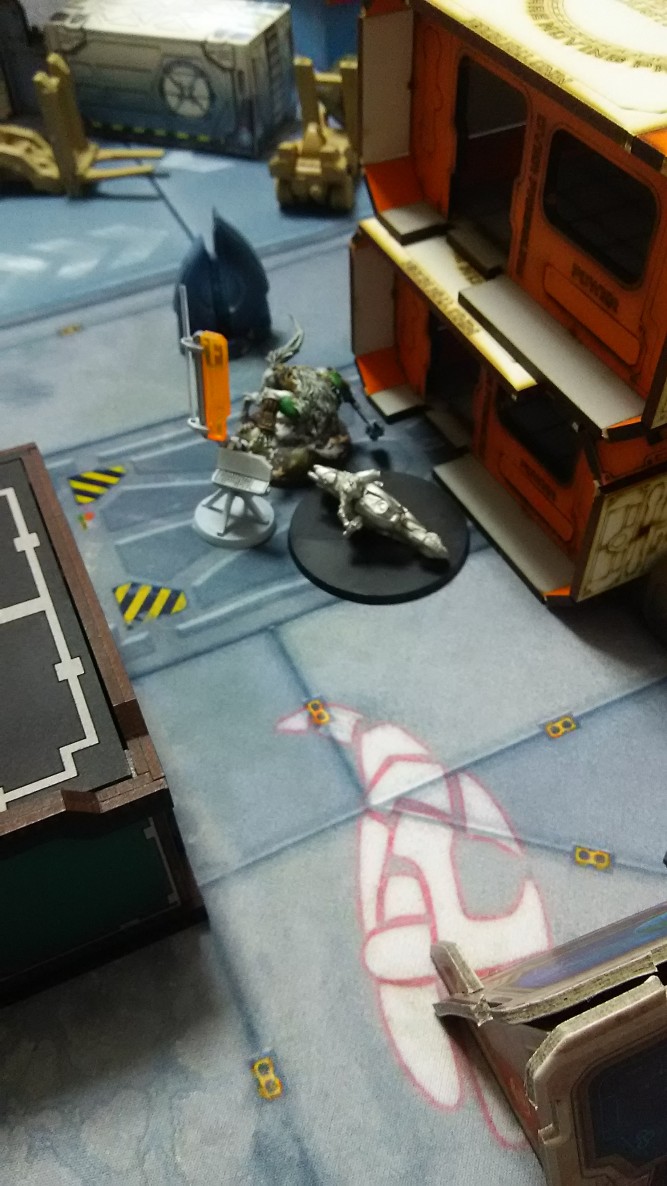 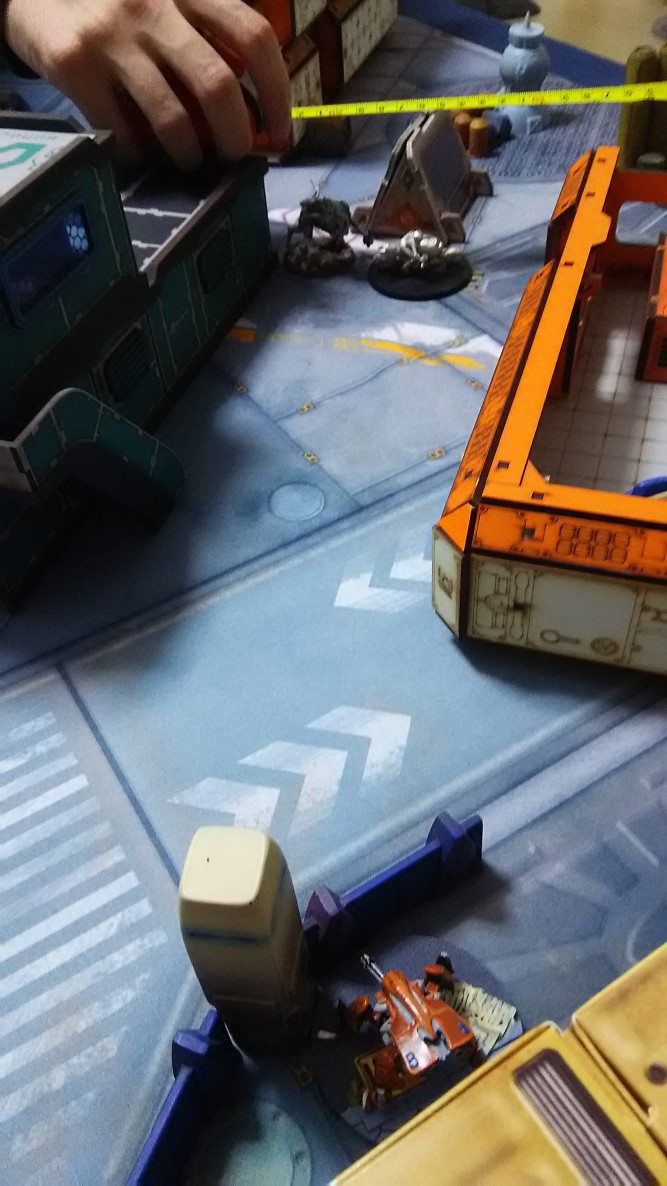 But takes a hit from the Ruishi 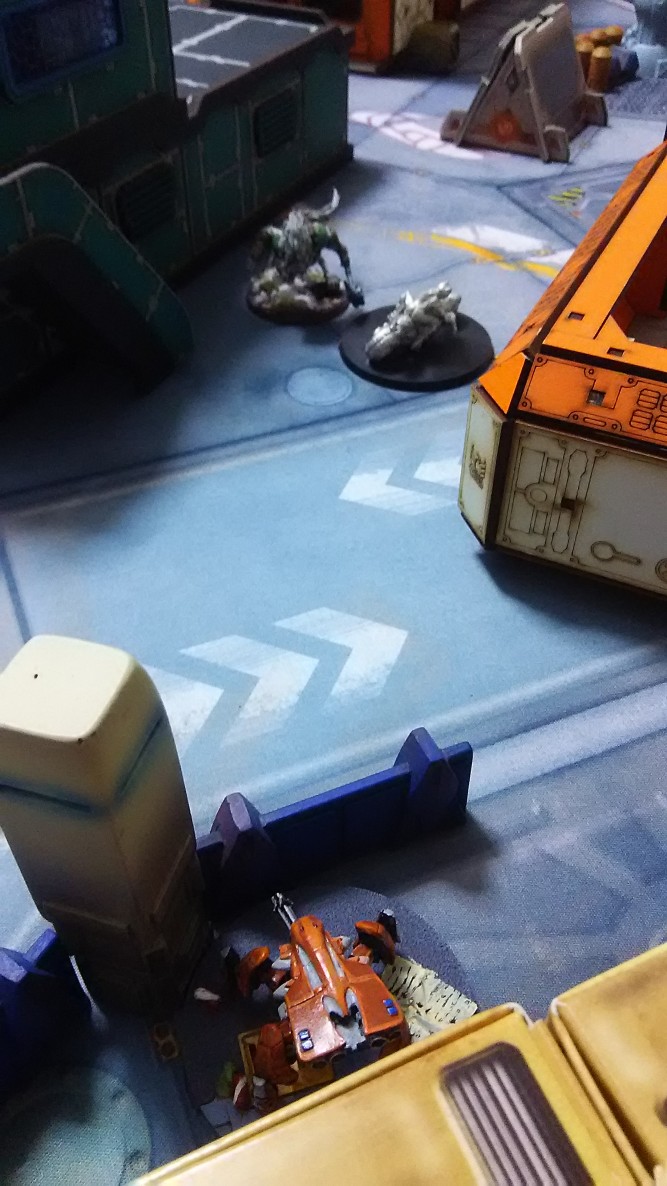 they kill each other in a final charge.

The Strelok managed to gun down one Kuang-shi before being laid low by a second. The now wounded Kuang-shi charged the Tartary line and killed a Irmandinhos before succumbing to his wounds. 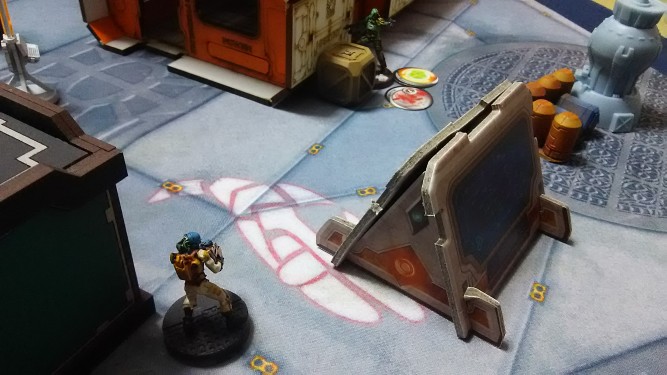 the second Kuang-Shi takes down the Strelok. 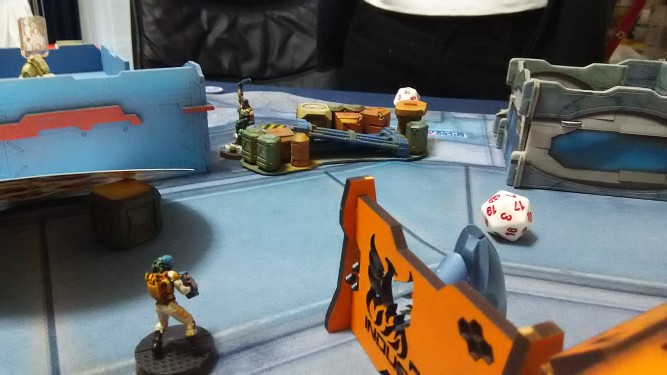 It was now time for the Kazak link to advance. Along the same path and they attempted the save the wounded Strelok before taking up a defensive position. 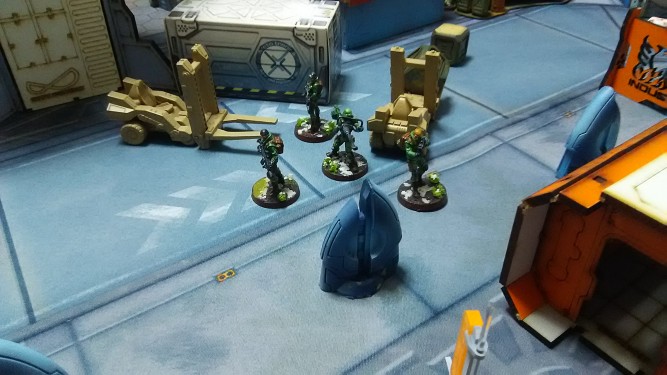 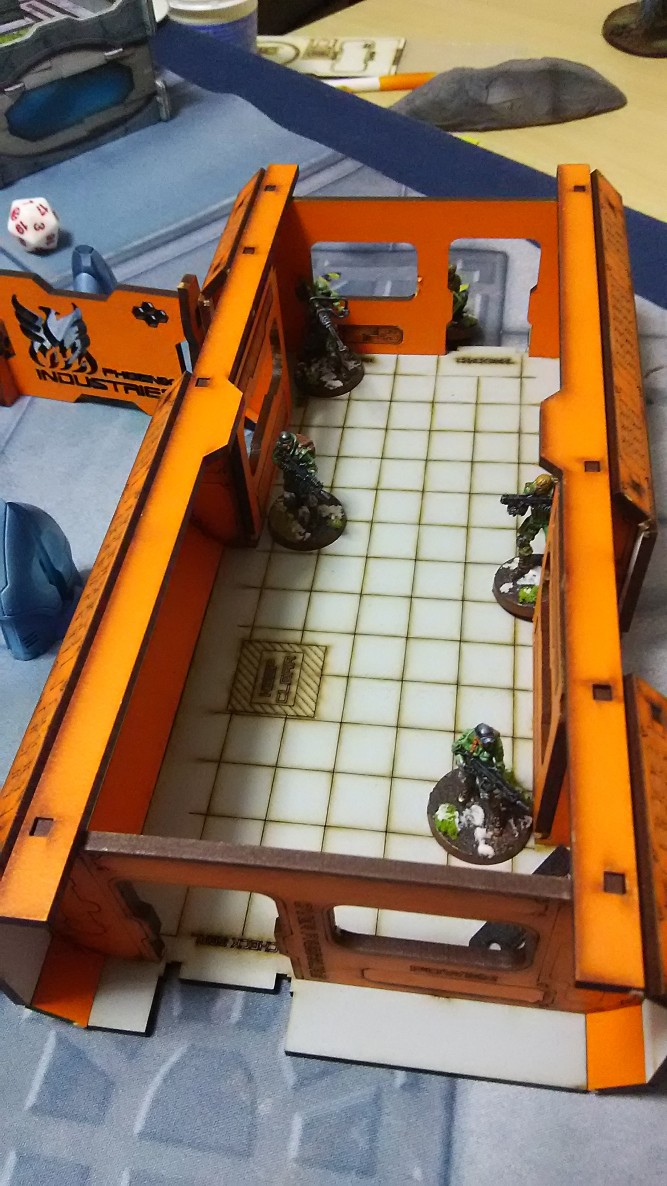 and set up a forward defensive position. 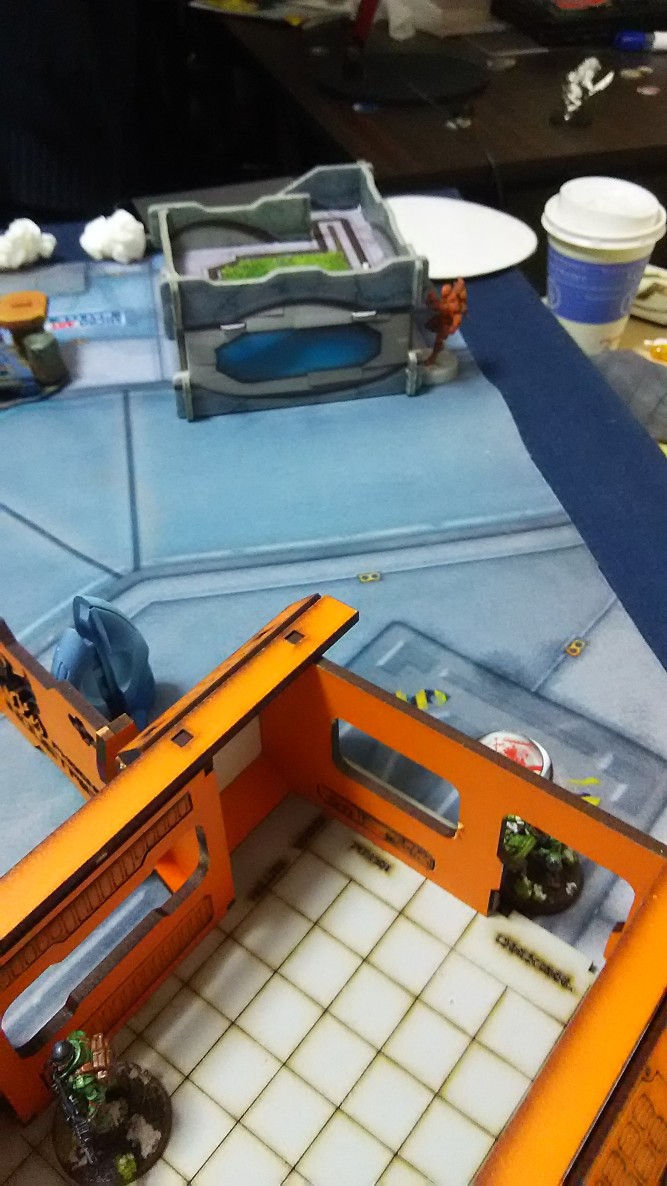 A Tiger lands and picks the Kazak team apart.

Lt. Yifan had done her job. She listened to the coms as a Tiger solider dropped behind the Kazak team and went to work. The first, second, third and fourth. Confirmed kills came in rapid succession and the corrupted Ariadnain forces were now crippled.

A Strelok was intent of revenge as he moved to surround the Tiger soldier with the help of an Antipode.

They managed to wound but not kill the Tiger. 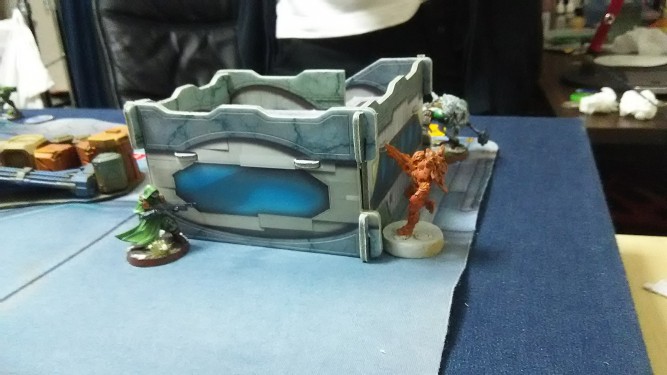 A Strelok and Antipode take down the Tiger.

Yifan took advantage of the remaining Kazak`s drop in guard as the threat of the Tiger went down. She popped round the corner and landed a head shot before he could dive for cover.

Yu-Wen and his two body guards Zhanying snuck up on the ariadnain transport that was waiting for the would be rescue team to confirm the death of the Yu-Jing commander.

As the battle was turning against the corrupted ariadnian forces Yu-wen and his team had advanced unnoticed towards the dropship were the turncoat Yu jing officer was waiting for extraction.

They were nearly on the target when it was clear they had decided their forces on the ground were lost as the doors began to close and the engine fired up.

The Hsien flashed some hand signals and him and one Zhanying burst into a sprint. It felt good to back in his armour.

the other Zhanying took aim and let out a well placed burst at the ships engines that erupted in fire before going dead.

Shots flew as the Yu-Wen entered the ship. He drew fire as the Zhanyeing let off a number of madtraps that glued down the Russians and the turncoat.

As they started to bio-scan the captives It was clear Yu-Wen had some new Shavastii to work with.