During the ambush of Hsein Yu-Wen's transport convoy, it became abundantly clear that multiple strings were being pulled to prevent Yu-Jing forces from being able to follow up on the leads they had new gotten access to by securing access to the main strip on Novyy Bangkok.

Yu-Wen's dropship had been badly damaged but had managed to make an emergency landing close enough to the Jiyuan facilities that there was no time for them to be attacked before they were reinforced.

The enemy had played their hand and shown that they were almost out of time. Yu-Wen sent the majority of his forces to hunt down anyone getting in place for the assault on the mine while a number of smaller units were sent across the asteroid to follow up on whatever intel they could find.

Wang Fuzhou was in charge of a team that was heading to the Xakars Battery where a number of illegal journeys had been discovered on a black box for an Ikari Company vessel that had been linked shavastii activities via a winding paper trail.

The flight took longer that the distance would normally require, but the pilot took the craft away from the asteroid and out on sensor range of anything in the conflict zone before turning, accelerating to a desired speed before turning off all unnecessary power and gliding as close as possible to the battery totally dark.

Even with just nine bodies and a single pilot, the ship was uncomfortably cramped. To save space all the High G anchors were designed for standing not the normal sitting and there was no separation between the hull and cockpit. All non essentials were absent.

No medical facilities, food storage or toilet. This was a vessel for purely for high risk operations behind enemy lines.

As the ship reached the Battery the zero G harnesses were released and the hull opened up into the void. Wang Fuzhou and his team slid out of the still moving vessel and once a few meters clear they used minimal thrust to direct there moment towards the designated entry point.

If the ship it’s self had done this, it's power output would have detected, but 9 personal thrusters were too small to be seen.

While the team approached the fire control module of the gigantic cannons the tiny drop ship continued to glide away with the intention to doubling back in 75 Minutes for extraction.

When they reached the fire control facilities they made contact with a Yu-Jing operative currently undercover as a journalist. If a few minutes he as one of the airlocks -designed to vent oxygen to stave out fires- opened and the team was inside.

Their objective was to check for any manipulation of the batteries safety systems and see if anything could help indicate the timing of a upcoming attack.

This was a sensitive issue because for whatever CA forces were sneaking in here, they must have had a guy on the inside.

The Yu-Jing command need proof before insinuating as such as Ariadnains were a sensitive bunch and there angrier was likely to let any forces slip away.

Their task was a simple one. They needed to access the security arrays and trace back any dater that had been imputed through them. If evidence was found the needed access to the control consoles to establish evidence of whoever had over ridden the security to allow the changes.

The su-Jain was the first forward to establish if the path forward was clear.

As the HI advanced it became clear that Ariadnian forces had noticed the security breach and had moved to investigate the situation.

Fuzhou`s orders held and he had to press forward to gather the intel as it was more important than keeping ariadna happy.

The su-Jian had the go ahead to clear a path and while it took on a link team of Kazaks and Frontoviks on the east flank, -killing one as well as a biker and an anipode,- a dakini attack bot was moved up on the west flank to gain access to the first array. 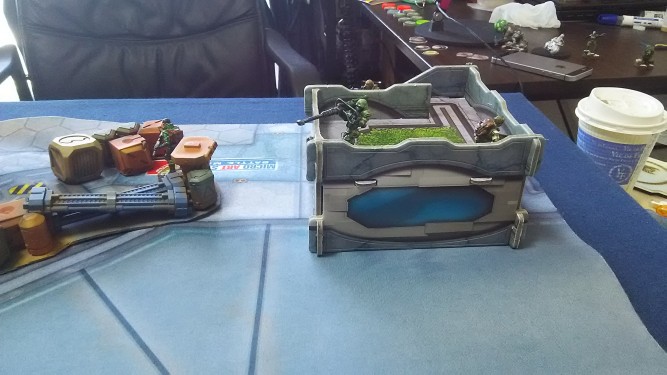 the Dakini accesses the first Array before... 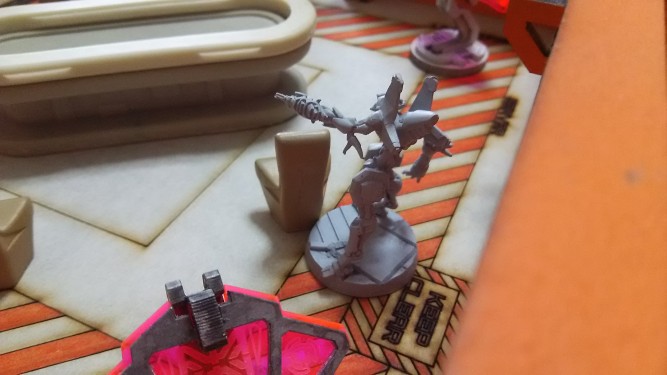 setting up a defense.

The Tartary corps were visibly frustrated when the Su-Jian withdrew enough to make a counter attack with their missile launcher impossible.

However, they wasted no time in taking down the Dakini with a Strelok before regaining control of the array on the west of the field. 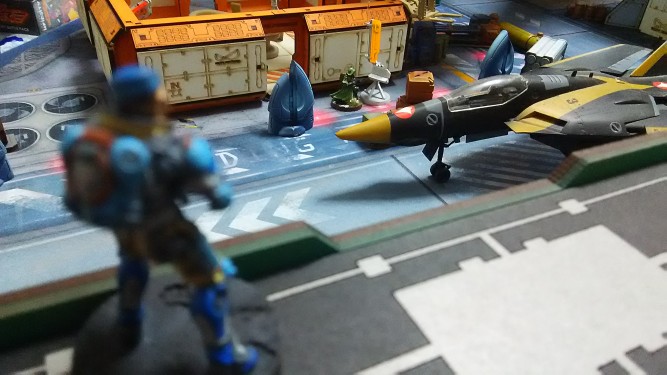 The under cover Yu-Jing agent fails to stop the Strelok undoing the Yu-Jing progress.

After it killed the Dakini with a surprise shotgun blast.

Fuzhou send the hacker forward to take advantage of some clear access to the eastern array and one it was under Yu-JIng control the hacker started to move through an office complex towards the central.

The su Jian moved back to cover the approach to the newly captured array, killing another Kazak and Strelok on the way. 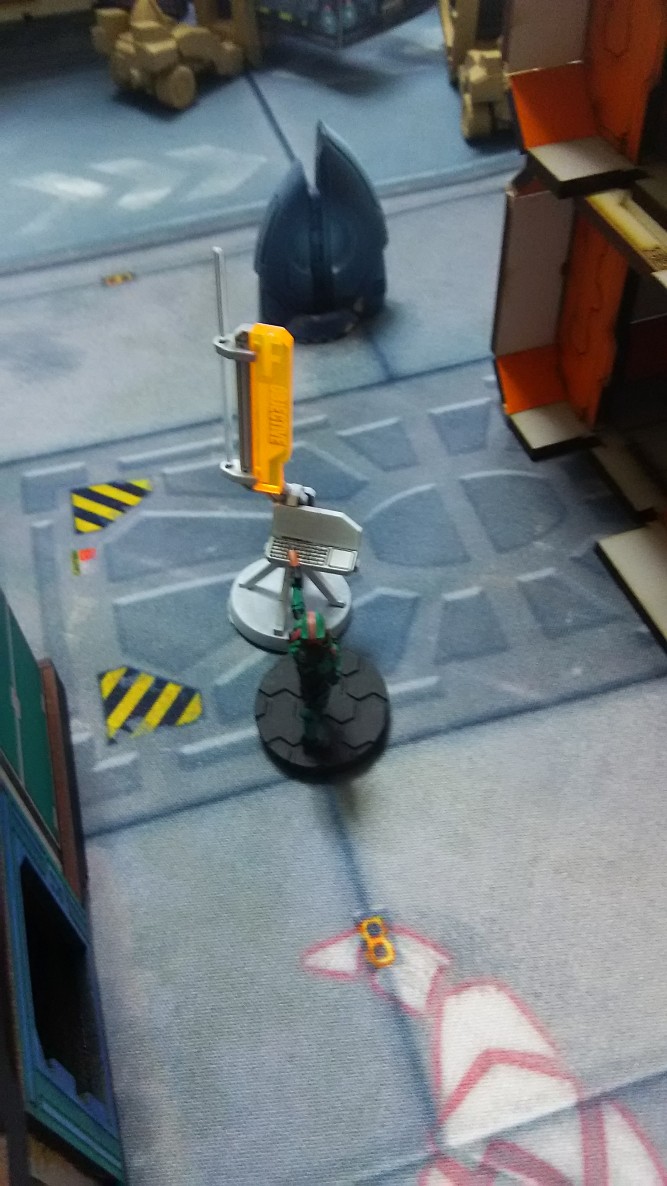 The Hacker takes the eastern Array. 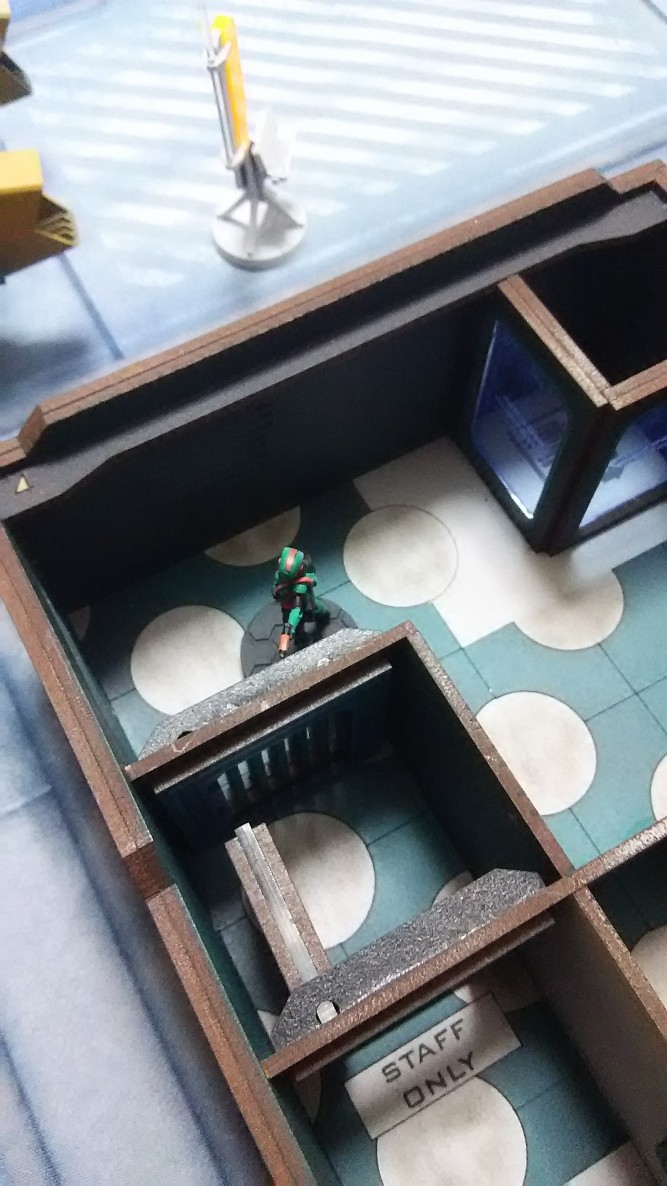 then moves through cover towards the central one. 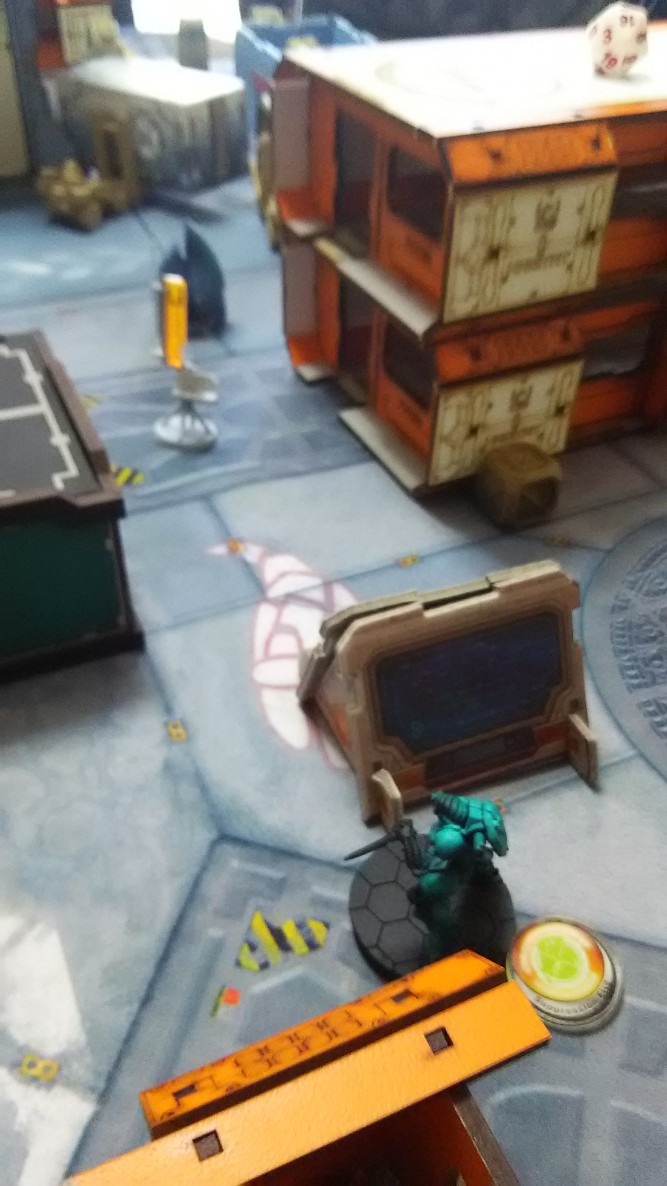 The Su-Jian drops back to cover any approach of the eastern array.

The strelok who had taken out the Dakini continued to advance and took out the undercover Yu-Jing agent before securing the central array.

The su-jian and the hacker moved towards the central array. They knew something was laying in wait but they both failed to identify the threat. In the end Fuzhou decided to send the hacker to retake the console to the west.

As the hacker dashed forwards she was taken down by a lucky hid form the Kazak paramedic.

Fuzhou had not been idle during the fight and had been doing his best to analyze all the information that was coming in for the shot access time they had had.

It was clear that some sleeper virus had been installed with the intent of weakening the Battery's ability to withstand and control damage but they needed more information to uncover who the collaborator of the replaced Ariadnian officer was.

A last risky effort seemed a fair price to pay for the possible advantage they could gain in the pained action of the CA so Fuzhou ordered the Su-Jian forward to try and gain access to the security console.

As the robotic HI dashed forward i took multiple combi and shotgun hits and by the time it had to face up to the missile shots from the Frontovik it was damaged to dodge out the way and went down.

The mission was a failure but they now had proof that the CA had entered the Battery in preparation for something. What the still did not know was when and who was helping them form within the Ariandian ranks.

Fuzhou lead his remaining forces back toward the evac and they were out of there before the drop ship was even detected.