Fought At The Gallery Maze: The Chimneys
1098 days 12 hours 32 minutes ago

In advance I apologize for some unpainted miniatures!

“Previously it was discovered that the mole, skillful puppet master, superior spy is among hassassins’ cell! We knew his or her codename “the Prophet” and by the end of the Kurage crisis famous Hussein Al-Djabel has captured the cube of the witness that saw the Prophet. For more details you may see the following references:

Al-Djabel disappears and secretly travels to the Novyy Bangkok in order to avoid the pursuit and where hassassins’ specialists may obtain all the information contained in the cube.”
—
“The day before the operation.
A group of novice muyibs is undergoing briefing held by their advisor farzan. The latter said:
“Tomorrow will be you first mission. Twenty minutes adventure, in-and-out. We locate secret transmission complex hidden in the labyrinth. Your mission is to perform reconnaissance; you may set up D-charges just in case. Tomorrow famous Leila Sharif will be here to describe the details of operation.”
—
The next day, several hours before mission. Leila greets everyone in the meeting room. One of Myuibs whispers to another:
– In the name of Allah, Leila is so damn hot…
– Abdul, you told me the same about that girl that you talked to when we sneaked in to the bar, you filthy dog! Also do not forget she is husam and not even regular one, but THE MOST FAMOUS ONE! I bet all my money the she won’t even notice you!
– We’ll see, Farukh, we’ll see…
In the second row of seats female muyib suddenly put on her tactical visor that no one notices her tears. The reason of her tears is that she is in desperate yet secret love with Abdul and at the same time she hates him the most in these moments!
—
Muyibs approach hidden complex while on another side of the asteroid the bar fight is happening, Shasvastii presence is revealed! After few minutes later incoming transmission from the commander:
“Objectives of your mission have been changed. There is comms race at the asteroid at the moment, the one that send the last message is the winner in the ongoing infowar conflict. Your mission is to retranslate messages directly from HHC. Over.”
– Brothers and sisters, you hear that!
– What is that in the front, sergeant? Security bot? DISPERSE!!!”
—

I lose the initiative roll, opponent takes the first turn. He locates the peacemaker dangerously close to my link of muyibs. I put my fiday as datatracker on the roof. All my daylamis fail their infiltration roll.

Peacemaker approaches to muyibs with HRL and daylami with PF. Light shotgun from daylami into the bot (covering both) and HRL with blast mode into the peacemaker (covering both) result as dogged state on muyib and dead robotic threat. Regular FO captures two antennas. Dart approaches to the building where is fiday. On her way she shot the muyib dead. After is naga FO captures another two antennas. Dart climbs the building and kills fiday. From the roof she also kills my Lieutenant. Thanks Allah I have farzan CoC!

Muttawiah jams naga. Muyib FO and farzan FO together capture three antennas (farzan failed one roll and it was crucial for further actions). Asawira climbs the box, sees the Dart but she successfully dodges. Muttawiah comes closer to Dart.

Orc with HMG tries to kill muttawiah that locks Dart on the roof but fails. Naga FO and regular FO capture antennas to the total number of five. Then orc with Feuerbach demolishes ALL FIVE DESIGNATED ANTENNAS in one turn! That’s it, we already lost!

Farzan FO takes one wound from orc with HMG (it takes all the regular orders). Then both daylamis crit in both orcs with their PF on their irregular orders! I missed the distance and farzan CoC unfortunately cannot reach enemy HVT.

Bagh-mari sniper takes down daylami. Dart tries to approach farzan CoC. Muttawiah tries to jam her twice, the roll was 19 twice, one arm roll is passed, and second is not. All the rest orders were spent on naga that tries to kill my HVT. But my HVT survived!

I was in LoL so cannot do anything useful. Our forces start to retreat.

—
“At the secret hassassins’ location.
Leila kicks off the door at commander’s office. The group of novice Muyibs stands in droves at the entrance while Leila yelling on the commander:
– What the Shaytan is happening?! Commander Kalib-al-Harb, do you even understand that these muyibs were just kids yesterday and today they were sent straight to the open conflict! You…
– Hold on, husam! Know you place! I will not sent you to prison only due to your prior merits and reputation! Calm down. The situation is very difficult… ehm, please, close the door, its confidential information but you have the permission…
…
– So you telling me that the Prophet is here? Now?
– Yes, we recognize her by surveillance algorithms, however it was too late, local quantronic server is pretty old and there are troubles with electricity, after all we are on giant rock in open space. I personally receive the information 10 minutes ago. She was in that damn bar yesterday. We believe that she has used some kind of nanotrackers and marks one of muyibs, presumably Abdul. They sneak to the Harry’s bar last night, what a shame!” 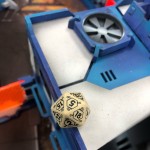 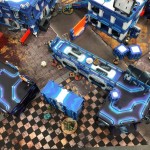 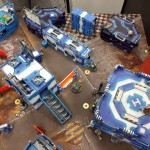 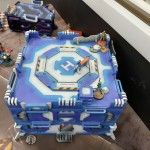 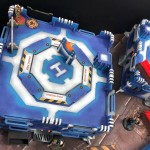 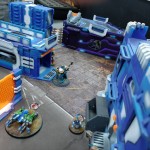