Meeting at reception of HQ

Opponent’s deployment.
Unidron Fireteam takes a position on the left flank. TR bot becomes on the central building of the deployment.
Noctifer with a missile launcher in hiden is set behind the TR bot.
Koh Dali occupies the building on the right.
Grief operator and r-drone are put on ARO on the right flank.

My first turn.
Naga KHD goes forward to the repeater zone from the ikadron and kills the nexus hacker.
Link Dakini brings two wounds to TP bot.
Then link tries to kill the grief operator with a sniper, but failure on the dice forces me to repair the sniper and spend another 2-3 orders to eliminate the operator and the drone.
Proxy Mk 5 activates the antenna.
At the last orders, the link of the dakini is trying to finish off the r-drone, but the noctifer appears, fortunately it misses, and the HMG hits on 1. Noctifer is Unconscious.

My opponent first turn.
Medtech repairs the r-drone. Then he climbs onto the roof and tries to heal the noctifer. Mk2 proxy appears and shoots at it. Medtech successfully dodge.
Next, the link of the unidrons is activated, trying to kill Mk2. During a long shootout, the unidron plasmasniper dies. Opponent reassembles the fireteam and goes forward. Unidron with a plasma carbine kills Mk2.
For the remaining orders, the link takes a more advantageous position, and MedTech heals the noctifer and repairs the TP bot.

My second turn.
Dart advances to the link of the unidrons and throws an EM grenade speculatively, but the nexus and unidron with carbines save. Then Dart makes 2 wounds in the unidron with a carbine from the SMG.
Naga KHD activates the console.
Dakini Firerteam again kills TP bot. R-drone blinds a sniper dakini with a crit.
At the last order, Dart goes into cover, trying to shoot the nexus. Nexus successfully evades.

My opponent second turn.
The remaining unidron with a carbine kills Dart from one volley.
Ko Dali climbs onto the roof of the building and shoots the HMG dakini. She spends the remaining orders on an unsuccessful shootout with the remaining dakinis in the link.
Medtech repairs TRbot and hides behind him.

My opponent last turn.
The link of the unidrons is trying to shoot the naga of KHD, but the spitfire gets a wound. Then the nexus on the lieutenant order tries to kill the naga and dies.
For the remaining orders, the FO unidron breaks through to the antenna and intercepts it, receiving 2 wounds. 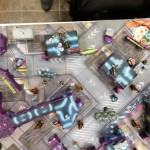 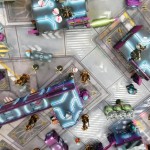 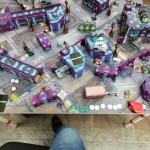