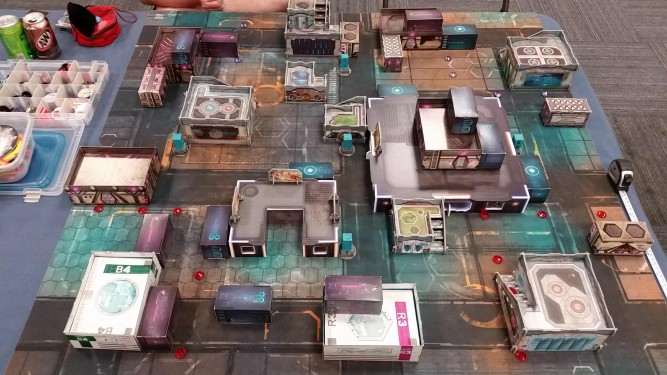 It's definitely unusual trying to play with these funky deployment zones; it makes me wonder if my usual list isn't the hottest for this, but, oh well 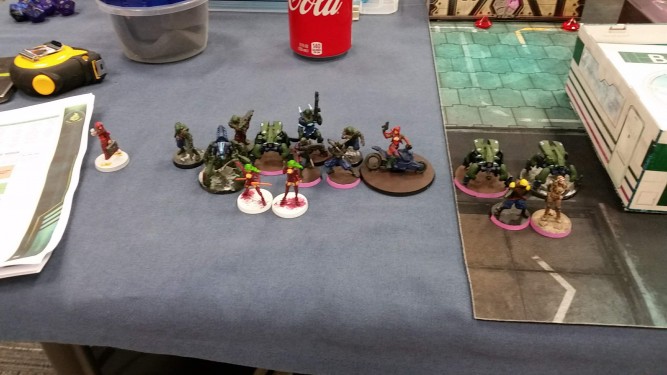 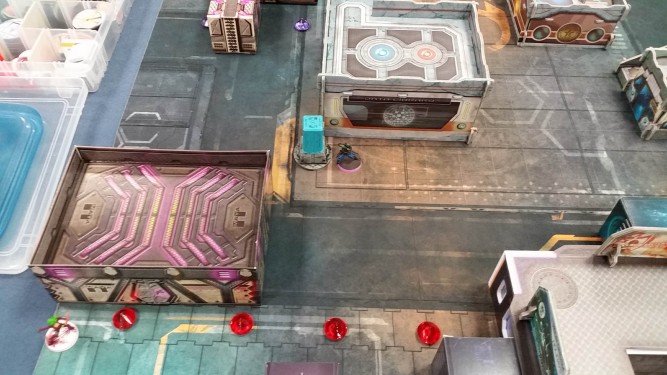 Razor FO on the left 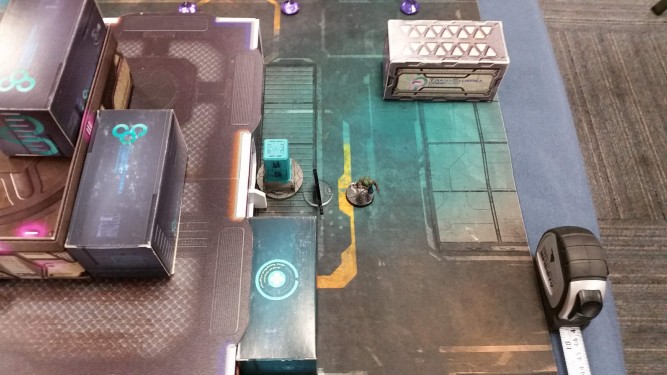 Razor minelayer on the right 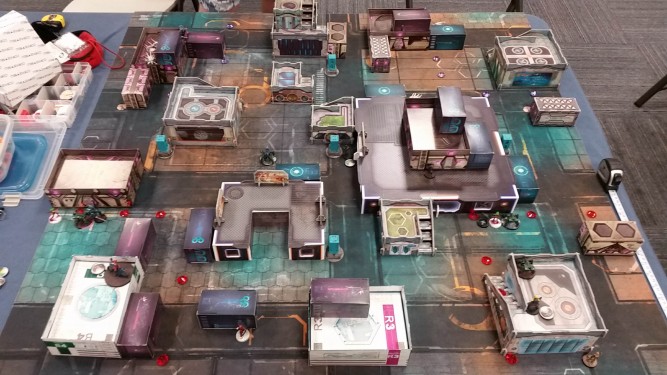 My deployment, with the opposing Varuna's castle visible in the top left corner 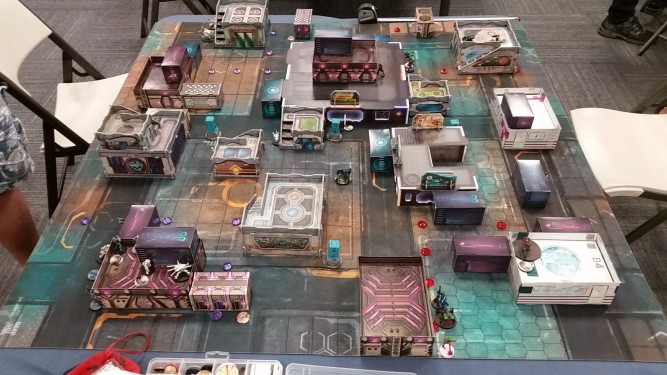 A little bit of a better view of the Varuna castle, as well as showing the Varuna troops hunkered down on the right side of the map 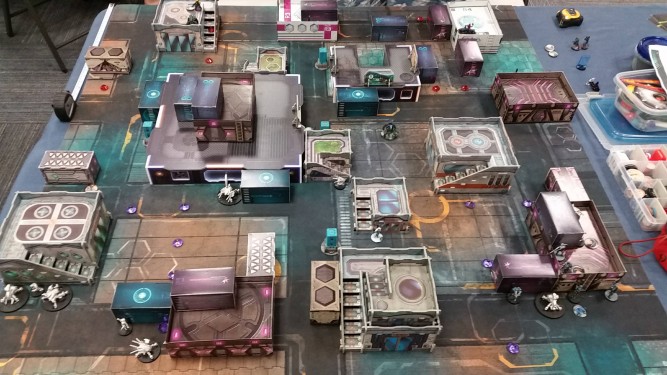 The view from the Varuna side of the board

The turn opens with both Varangians taking advantage of their impetuous orders. The one on the left idles the second short skill; the one on the right throws a smoke grenade to cover her advance on the Varuna camo token.

On the right, the Varangian continues her advance through the first smoke grenade; surprisingly, the camo token decides to reveal itself as a Zulu Cobra killer hacker, taking a shot at the Varangian. The Varangian decides to throw another smoke to let her get that much closer, beating out the Zulu Cobra's shot. 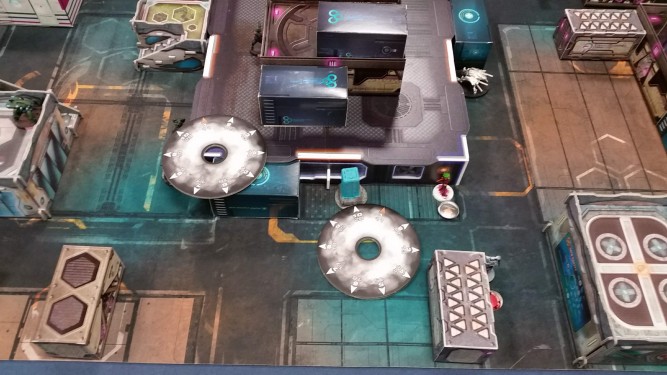 The Varangian advances further forward, forcing the Zulu Cobra to decide to shoot or dodge to beat out the Varangian's possible chain rifle or light shotgun. He opts to shoot and goes unconscious from the ensuing chain rifle. The unstoppable Varangian passes her armor save, that slinky minx.

The Varangian also tried stepping around the corner and shooting the peacemaker, taking free shots from the overwatching Kamau sniper. The peacemaker passed its armor save and, amazingly, so did the Varangian. 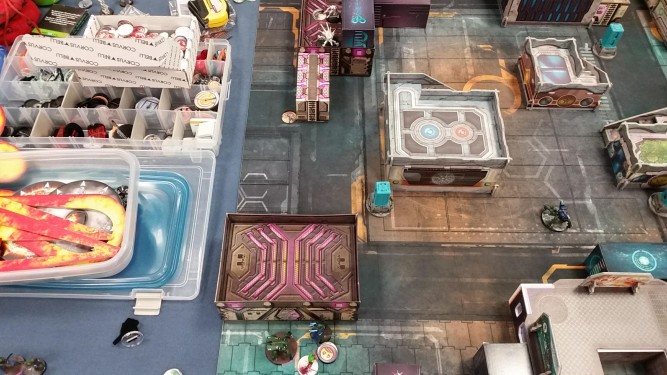 On the left, the Omega steps around the corner to kill the targets hunkered down on the right, courtesy of a great angle; the sweet plan is foiled when he gets crit-flashpulsed T,T

Tilted off my rocker, I wasted a bunch of orders, charging the Varangian on the left forward into the face of the enemy; the Varangian got flash pulsed, so couldn't do any actual damage, but, the theory goes, so can't the opposing troops there, either. 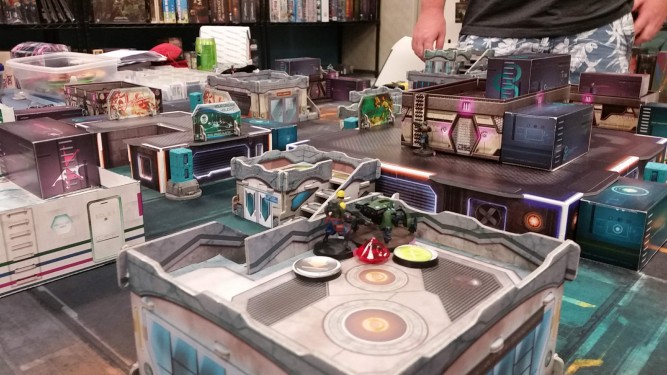 I think I may have spent an order losing a gunfight using my boosted Peeler vs the Kamau MSV sniper, then bringing it back since both the Peeler and Monstrucker were in group 2 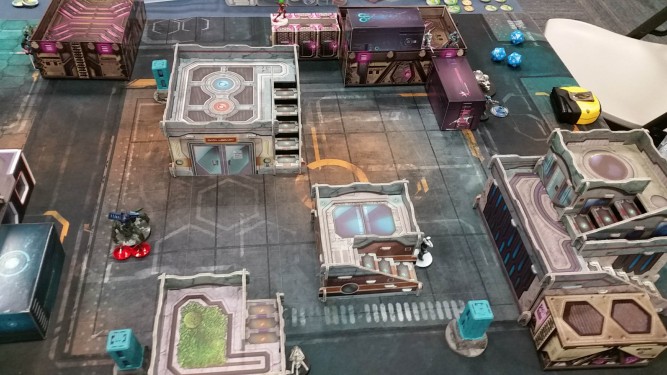 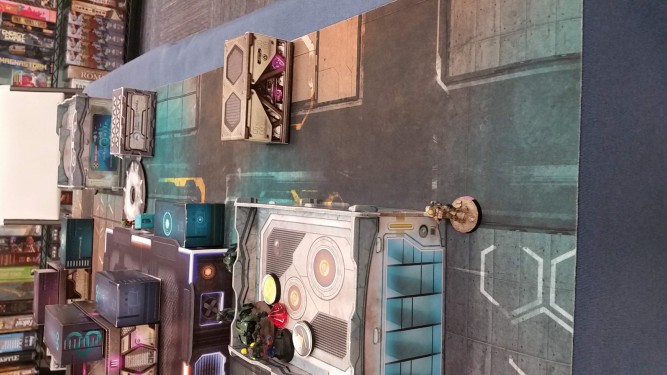 That smoke grenade was thrown too far forward; it let a bulleteer get by my Varangian and shoot my warcor covering my backline. This let an Echo-Bravo enter the board on my back edge. 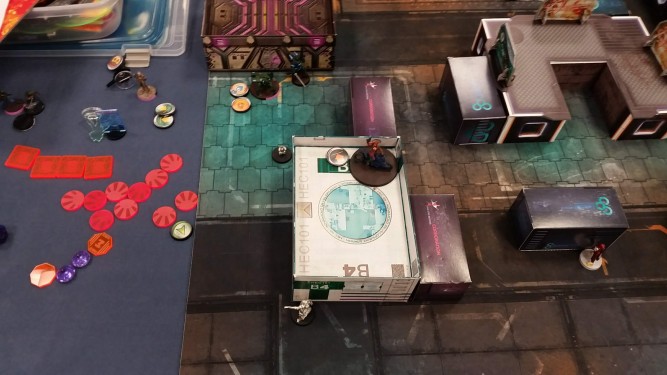 Unlimited ammo meant tons of wildparrots all over the place, effectively rooting me in place. 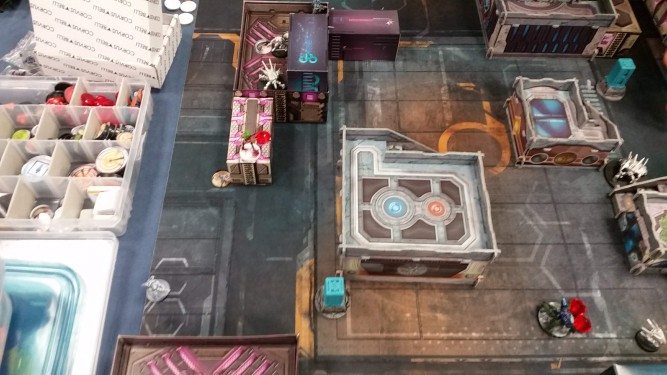 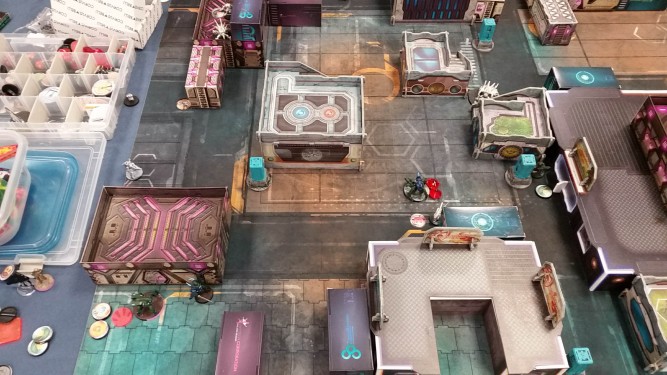 Omega shoots the exposed peacemaker. I should have then backed it up to shoot the Echo-Bravo in my backline, but I neglected to do so in favor of dumbly trying to press forward. This would later bite my ass and lead to loss of lieutenant 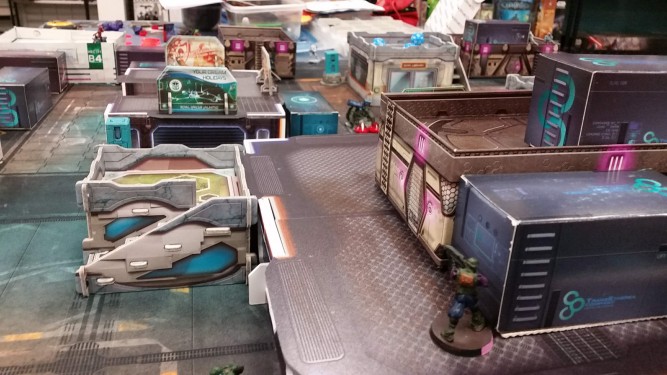 Epsilon shoots the Echo-Bravo that didn't have enough orders to leave the edge of the board and get outta line of sight. 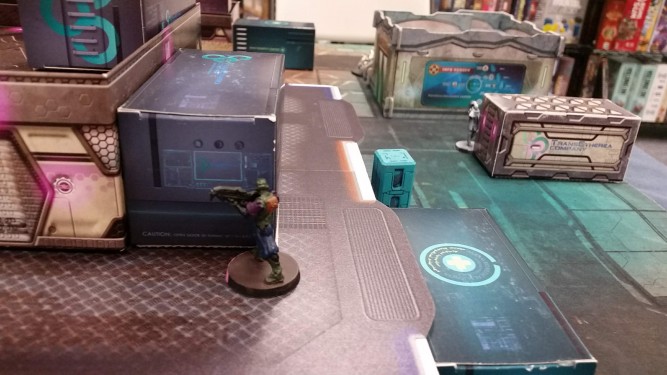 I think the boosted bulleteer tried dislodging the Epsilon and lost the fight. 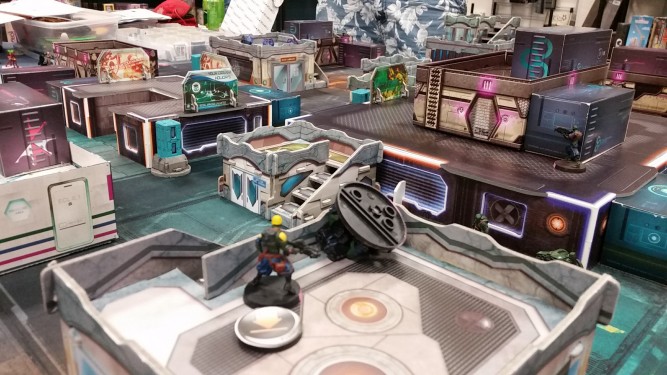 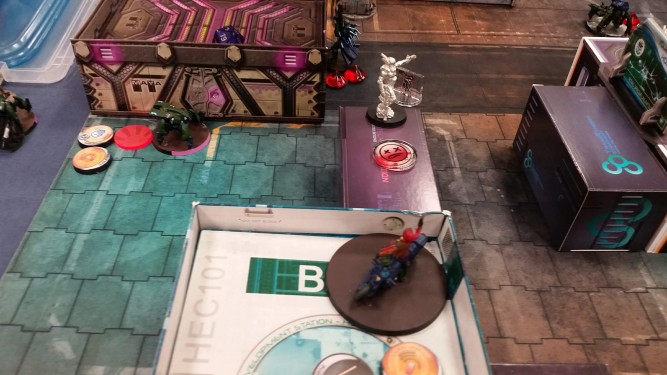 The Alpha beats out the Echo-Bravo in a shotgun duel, but takes a wildparrot and fails the BTS, putting me into loss of lieutenant 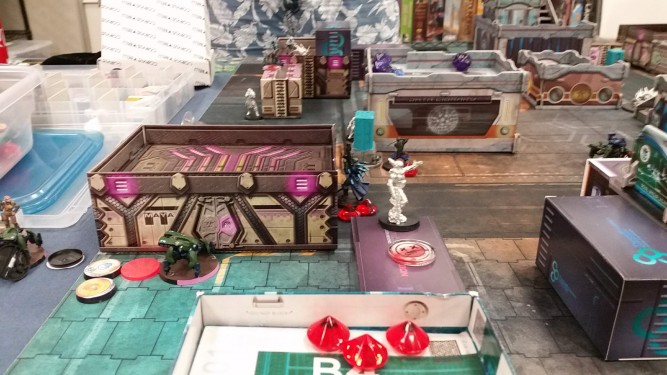 Just prior to this picture, the machinist ran forward to try and grab the console, provoking a Razor FO's ARO shotgun. The machinist beats out the Razor's shottie, but the shottie blast catches and knocks a Zulu Cobra spitfire unconscious. In loss of lieutenant, I stand up the Alpha and try to kill the exposed machinist; the machinist takes a hit, but makes the save. Needless to say, the Alpha pops like a balloon to the Kamau sniper (who had earlier knocked the exposed Omega unconscious)

The 5-man link moves forward to remove the last sirius FO obstacle and is able to do so, allowing the machinist to then move forward and grab the 2 consoles, the second of which is successfully secured on the last order of the game, very tightly bringing the game back to a victory for Varuna.