This is a follow up of the previous storyline. This game was played at a tournament and I needed to include a reason for another combat group interfering with the Narrative. “Luckily” I lost my second game to Tristan (see: https://asteroidblues.warconsole.com/battles/tristan228-vs-durian-khaar-1569790200). I could not post the Battle Report for this, as the location closed off before I pressed the publish BR. So the background story will be presented in short at the start of the narrative below.

We were playing a game of Biotechvore 300 pts. I took Deployment and he chose first turn. This was exactly as I had hoped and anticipated, but the table was so damn full, that it was very problematic to get some firelanes for the Kaplan Sniper and the TR-Drone. Oh yes, and my Classified was Extreme Prejudice and HVT: Inoculation.

I employed strategic use of Command tokens, limiting him to spending only one in his first turn.

My opponent started with putting his S7 Camo Token on the table...Oh Jeez, a Cutter. The Cutter used his Tac Awareness and two orders, in order to get line of sight to my guys. Namely the (Fat) YuanYuan and the sniper. He was just inside 16” for the Sniper, which actually was quite a boon for me, as he was not able to claim cover from that angle (moved to far) and did not receive any bonus, while. That way we both shot at 9s. While the YuanYuan (outfitted with an Automedkit) fell unconcious, the Kaplan wounded the Cutter. He then decided to Coordinate an Order on his backdrop guys, namely a decloaked Croc, a TR Drone, the Mechanic and another TO Marker. He had to move his assets, that way my Kaplan got an easy shot at his TR Drone, taking it out of comission. His Nisse Sniper tried to act tough, walked forward into the open, and was consequently shot down by the same Kaplan (I am really proud of that guy). I don’t know why my opponent did not focus on the Kaplan with his Cutter, he just didn’t. Only after the carnage he activated his TAG again, but for whatever reason, he decided to move him across the open, right through the firelanes of Sniper, TR-Drone and a Feuerbach Azrail. Let’s just say, it didn’t end well for him.
At the end of his turn, he even lost the Croc and an Auxilia to the Biotechvore.

My turn, and I was still at 10 regular orders.
Initially I had hoped my opponent would move his Cutter in Range to my Assault Hacker, but as that thing was only smoking metal by now, this was not an option anymore. So I first the Impetous Moves let the two living YuanYuans move forward. I used the Irregular orders to lay smoke for the other units behind them. The Fat YuanYuan activated his Automedkit, and lived o.O. The rest of the the crew moved forward, Kaplan Doc getting in touch with the cutter and performing Coup de Grace on it. I did not shoot anything, as I did not have to...

The only unit still in the Biotechvore Zone was the Automedkit Yuan Yuan, and he did survive again, rolling a 20 on the BTS Save. I was very impressed.

It was not over yet: My opponent decloaked his Hexa KHD and Data Scanned my HVT. Then he tried to move his Auxbot into Range for killing the Yuan Yuan on his right. But it was obliterated by the Kaplans dominating the middle section. He moved the remaining units ,which was only the Warcor and his engineer into Safety, and dropped Supressive Fire on the few units remaining.

There was not much left to do: The right flank YuanYuan walked forward, using his acquired Light Flamer he took out the Dronbot, dying in the process. My Lt. Mobile Brigada moved forward and did the same to the Auxilia. He did receive a wound, but that did not matter for me, as the Auxilia was also my opponent’s Lt. On the other side I cleared the way with the TR Drone, taking out the Engineer and the Warcor. Then I moved my Kaplan Doctor out of the Fireteam to the HVT, to achieve HVT: Inoculation.

We decided to call it there, he was in LoL and had only his Hexa left. I had achieved every objective, while he had only his classified, resulting in a 10-1 Win for me.

Halifa seldom had had an operation going sideways that much. After the battery had attacked the Mag-Lev Rail. The security forces had scrambled and made their way across the asteroid in order to stop the bombardement. Khaars Corsairs had targeted a Team of Kamau, as they were after those concealing uniforms. Once the Corsairs had arrived at the interception point and readied themselves for “delaying” the PanOceanian Units, Halifa had to realize, the Nomads did not appreciate the presence of a pirate crew. Although they had seized two of the Kamaus, and caused enough trouble in the area to distract anyone of their goal, her team had been reduced to her, Doc, and Galeb the Grenadier. Everyone else had been wounded or apprehended. At the moment they hid near a ventilation unit of the Cosmika HQ Hub, getting visual feed from the two remaining Fanous just outside their hideout. The three of them looked at each other, they needed a way out, fast. And not just because the ventilation unit leaked a ghastly smelling fluid, but because there surely would be a PanO Retaliation Unit on its way. Galbe sighed heavily and pulled out a small metal box: “I think it is time to spend some of that good money I made...” Halifa looked at the box in disbelief. 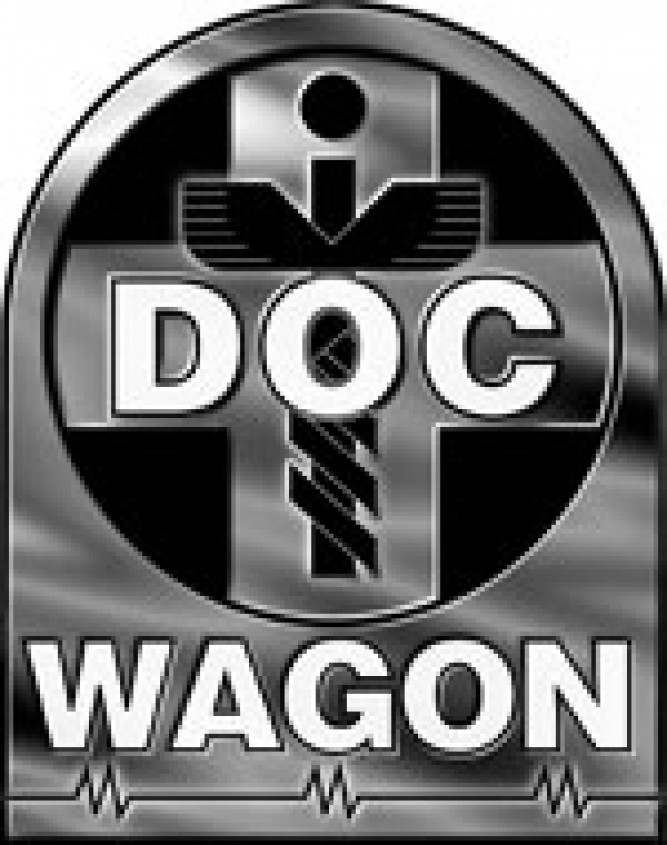 “We have a mission. Open an escape route and cube extraction. Possible hostile invervention Unit on the way,” Sergeant Erik, Commander of the DocWagon rapid response Medicals Services on Novyy Bangkok, speeded through the pristine white corridors of the barracks, scrambling his men, “Get your gear. Air support is on the way. We are entering the zone through a contaminated area, open the gate to the traffic control and extract the survivors.” – “What if we encounter Resistance?” Their medical advisor Sirius asked, getting into his Kaplan gear. “Eliminate, and make them know we are serious!” Erik replied. Transport is leaving in ten, so hurry!” Sergeant Erik affixed his blue helmet on his modified Brigada gear while his ghost remotely started the pre-warming sequence on their dropship. 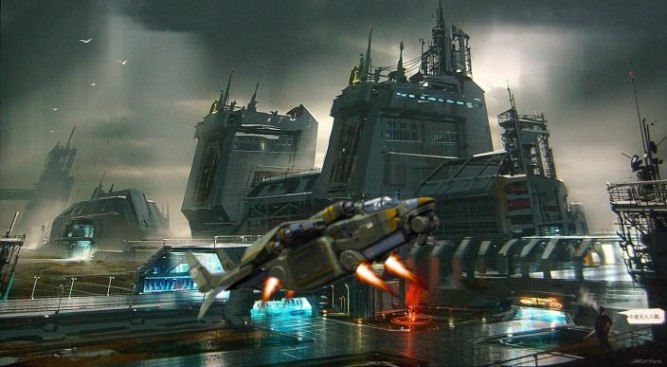 Ride into the Danger Zone 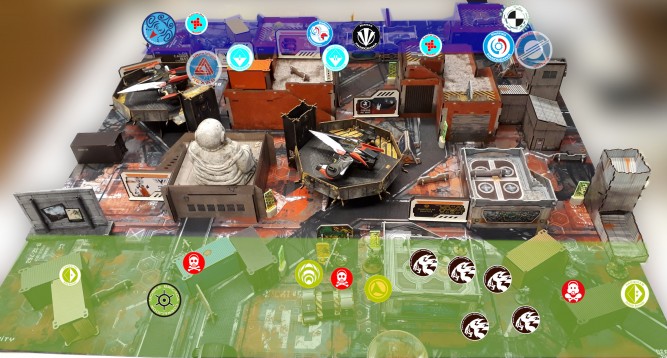 As the team spread out, Doc Sirius reported to the Sergeant: “High Radiation levels, we need to get into the shadow of those landing pads, quick.” – “Willko, but we have unwanted guests, let them come to us first. Slow them down,” Erik replied. The Kaplan team acknowledged, and scanned the area. Suddenly the voluptuous Yuan Yuan Galwan shouted: “Contact, there is something really...ugh” As the giant TAG decloaked and opened fire, the massive Yuan Yuan was to slow to get into cover. His body slammed against a support beam. The teams Sniper Mahammad returned fire, damaging the cloaking unit of the Cutter. “These are PanO troops, a killer commando! Who the hell are we rescuing,” He asked the Sergeant, but Erik stayed silent. It did not matter who pressed the evacuation device. If they did, DocWagon comes to their aid. “ Mahammad, slow them down. Anything that moves gets a bullet, do you copy?” The Sniper did not bother to answer, but rather let actions be his replies. The blaring of the Sniper Rifle confirmed the Sergeants orders. Doc Sirius reported a Dronbot and a Nisse as casualities, while the enemy Killer Commando closed in.

The Cutters commander, seemingly enraged by the casualities, drove his TAG right between the DocWagons Heavy Fire, relying on his Armor. A foolish choice, as all the guns fired at his Chassis, rendering the Unit to Scrap Metal. 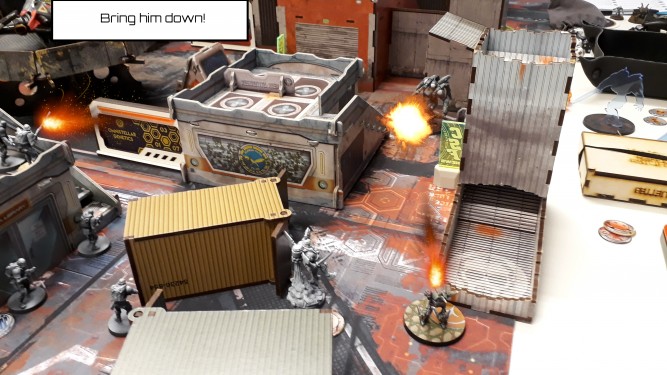 As he saw, that some of the enemy troops had already succumbed to the dangerous environment, Sergeant Erik decided they had waited long enough. His ghost gave the team the order to move out, while it also activated Galwan’s Automedkit, getting the obese Pirate back on his feet. The other YuanYuans moved forward, and covered the Rescue Team with their Smoke Grenades. As the group neared the center of operations, now free from the lethal radiation, they established another secure firing position. Sergeant Erik hesitated as the bulk of the enemy survivors were located near his sector. Without saying a word, he had the Kaplans cover all access points to his location. Meanwhile was Doc Sirius inspecting the smoking remains of the Cutter. He took out his knife and drove it right into the central processing unit. “That’s for using unnecessary violence.” 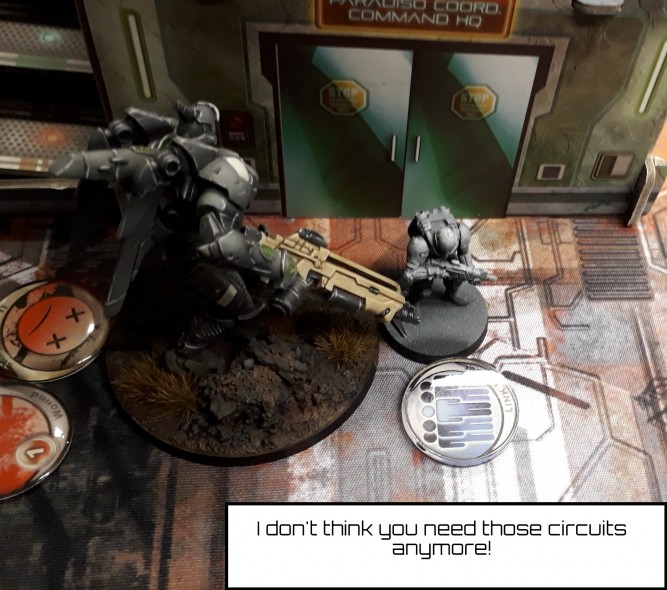 Eye for an Eye, well, nobody died, so take it as a warning.

The Rescue Team waited for the Panoceans next move. Mahammad was not going to let them move anyway. Cautiously a small Auxbot tried to get around the corner, and was promptly destroyed. The Killer Team got the message, but the misinterpreted it and started shooting in the general direction of the Squad. Erik was not going to wait any longer. “Push them off the field!” he ordered. Mr. Blad the Yuan Yuan obliged and directed his flamer to the nearby pathfinder. Regardless of the injury he gave his Sergeant the green light, as the path was cleared. 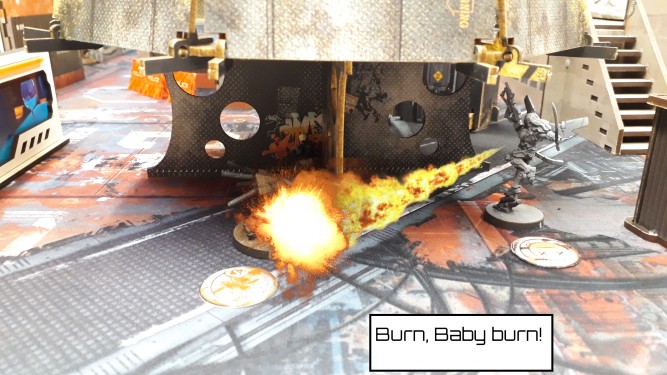 It is a fair exchange

Erik sweeped past the injured YuanYuan and stood before the enemy Lt. “Give it up and go!” The Auxilia decided against the Commanders goodwill and opened fire. As the bullets hit Erik’s power armor and damaged the seals, he opened fire with his flamer, sending a message to the Hexa on the other side of the Landing pad. 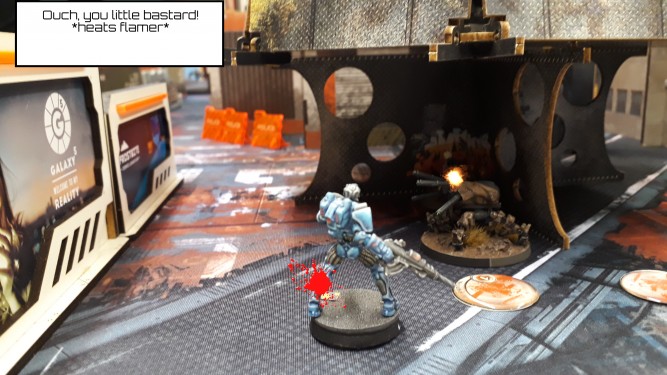 As Halifa and her remaining team crawled out of the ventilation system, they were welcomed by the DocWagon Rescue Team. Sergeant Erik looked at her in a bit of disgust. But that was rather due to her being besmirched with all kinds of dirt that had been lying in those tunnels for years. She was sure, that her smell was also not that pleasant. They were back at the Spaceport and a Transport was just outside of the Access point. The Sergeant surpressed gagging as he adressed the Lieutenant: “Sir, we hope you are well, our Cube Jaeger Team is on the way to your previous Encounter, securing the remains of your squad. If anyone else has survived, we will notifiy you.” – “Thank you, Sergeant,” she replied, still not believing her luck,” we thought we were done for! Is there something else? I cannot help but notice, that you seem a little uneasy.” – "Yes, well ma’m, we have discovered some strange data. Doc Sirius had a Civilian inoculated, but the Subject has by now fled the premises. He was sure to have identified alien DNA. A Data Scan of the enemy team, which our Hacker intercepted, reveals, that the personal employed at this dock is indeed part of the Shasworth Company.” – “Aliens, Shasworth? I know that they were delivering goods from the Xaracs Battery. I need to take this to my superiors. Thank you Sergeant. You will understand, that I really need a shower now, will you?” Halifa smiled at the Mobile Brigada, but she had a really bad feeling in her guts... 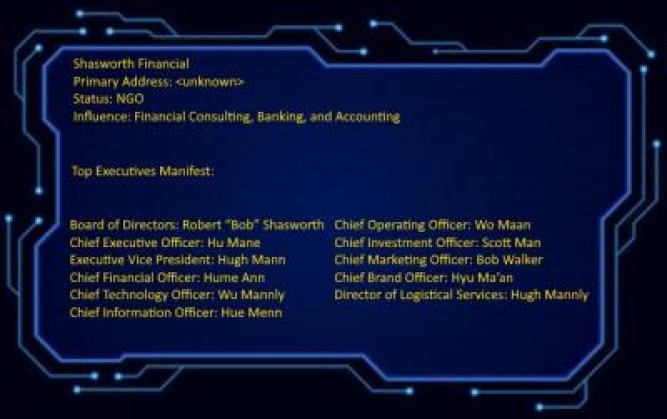 Strange Data Intercepted by the Al'Hawwa, connected to the Civilian at the traffic hub.