We are not going to stop now! We still here and we shall take everything frim then!
We were gathering supplies when the Pano forces approach us, we started the attack moving to fight their fireteam, our strong Domaru shoot round after round, taken down two foes.. now with their forces reduced our lady Kitsune advanced, approaching from behind the mighty Teucer.. dealing a powerfull blow with her sword! Killing it instantly..
The enemy wasn’t going to give in yet.. Scylla moved her Devabot to fire its flamethrower against Kitsune.. but she was ready, she swiftly evade the flames and engaged the bot.. the enemy started to panic.. Scylla decided to give in her bot.. and Kitsune give it no mercy.. but a poor decision was made.. one of the Pano forces shoot her in a attempt to deafeat her.. their aim was precise, and she wasn’t able to evade it.. falling in the process.. then their forces moved foward, they were looking to control the zones now that Kitsune was gone..
Our Ryuken was nit going to just stand and watch.. she stood up and started a rampage against the troops into our zone.. the poor ones stood no chance but a lucky bullet from the Guarda took her down, then the fireteam took the lead.. moving into a tall building so we could control their zone.. covering all fronts in case they decided to come..
And they did, the Guarda moved foward.. its bot was destroyed in the process.. but he refused to fall, taking down with many powerfull blows one of our Domaru and one Tanko..
We weren’t going to let that get away.. our last Tanko shut Guarda down with its shotgun.. then we tried to shut down their fireteam but.. luck was on their side, they keep saving every wound until we have no choice but to take cover..
They keep coming.. too many critical hits were made.. our forces hold as much as they could until.. we made it! The enemy couldn’t control the zone due to their low forces.. the day was ours!.. a difficult fight it was.. 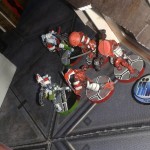 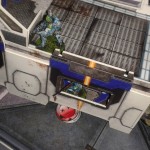 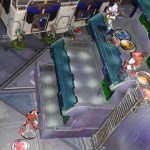 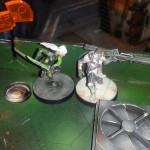 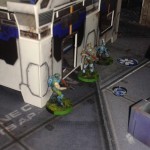