I apologize for the short reports. It is very hard to write in English. We played the tournament in three company tours.
It was too fast a game.
I went first. Moved avatar close to the enemies. He took the air of the best fighters with a sepsitor! 🙂
Everyone who was hiding began to shoot. I got so carried away that I forgot about the main mission. As a result, he killed more than 75% of the opponent.
On his move, he retreated 🙁
The game lasted 10-15 minutes.
Draw. 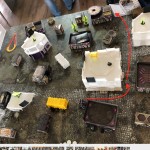 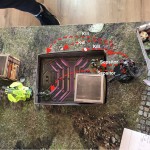