Sadly this is my last report for the campaign I did my best and I hope to see you guys next year!

The Final Day, The Final Patrol, The Reminiscence

Being my final day on the Open Pit, I took some troops to patrol the area as those are my orders. I couldn't help but to remember all what had happened in this period: me defeating a bunch of monkeys (Combined Army) twice, got my confidence and ego to the air, facing the rioting Nomads on the bar made me nostalgic due to my Heritage; then dealing with their most powerful ally Haqqislam, tasting defeat; and finally Engaging and defeating for the first time my nemesis Commander Kortz, this feeling of overcoming an incredible foe that at the point looked invinsible, all those great memories, they all were a blast!

This train of memories was brought to an end as a Kiuutan sent an alert of incoming Haqqislam troops shot a barrel of fuel with incendiary ammunition making it blow breaching the hull, debris flew again in the air and we took possition. Commander VicBanjo was the leader... a fitting end for this last day of opperations.

The Power of Qapu

The enemy was fast a group of ghulam fashioning rocket launchers controlled our right flank, a solid defence indeed, another team of an odaliske and djabanzan took our left, and endless number of remotes was in the scene mainly flash pulses, our sensors detected more movement but we couldn't see it.
This invisible stalkers known as Alhawa moved quickly trying to dismantle our team of Brawlers failing in the attempt as both sides took a shot and both survived.
The odaliske team moved they went for our draals, most of our dralls survived the wounds and stayed their ground then another Alhawa shot them from behind, all Draals but one lost their symbiont armor, the enemy was intact.

We moved shooting down an enemy ghulam with our viral sniper rifle as a Brawler revealed to be an Holoed Taagma, this however costed us a real Brawler sniper, we could move but the enemy Alhawa was close so they decided not to.

The draals attempted to deal with the enemy Djabanzan failing and most of them were knocked unconscious, the Kiuutan having to move to save this guys shot an odaliske down and a remote, and one Djabanzan however the last Djabanzan survived and managed to get away.

The enemy was running out of time and we were controlling most of the area they had no were to go. 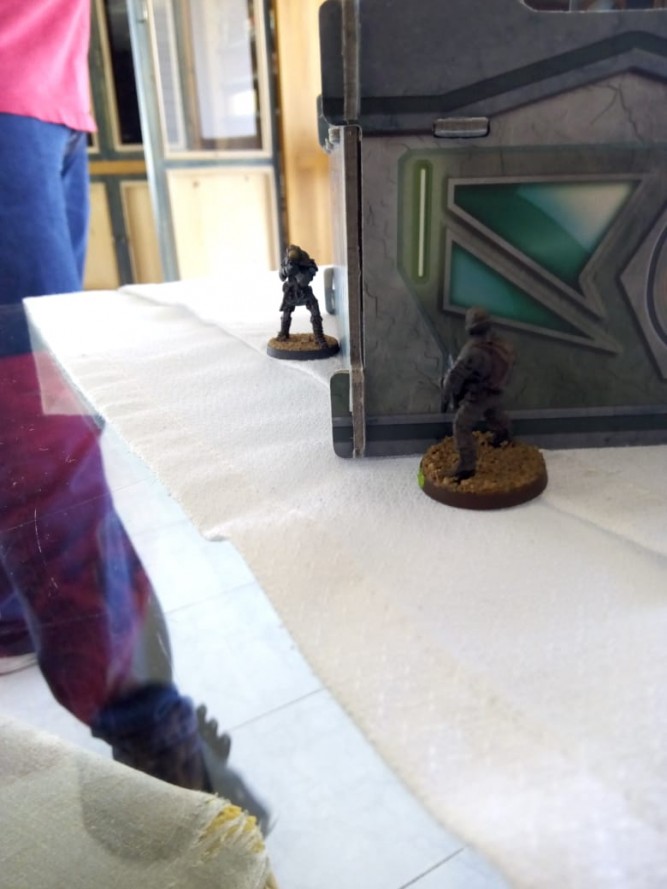 The Alhawa trying to kill our Brawler 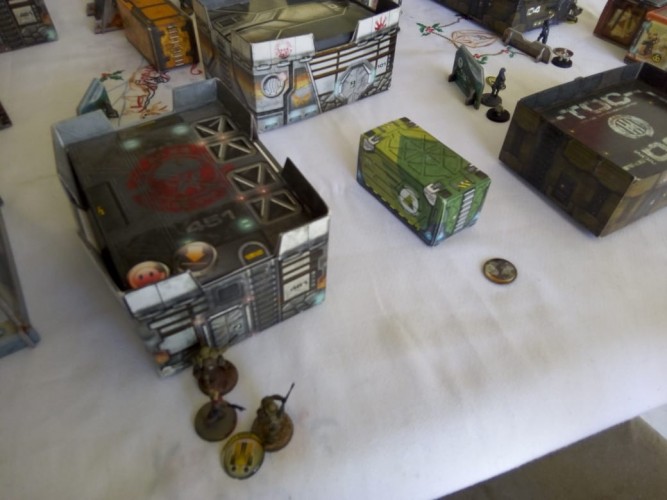 The enemy Harris and the Alhawa on the move, also our Kiuutan patiently waiting to strike 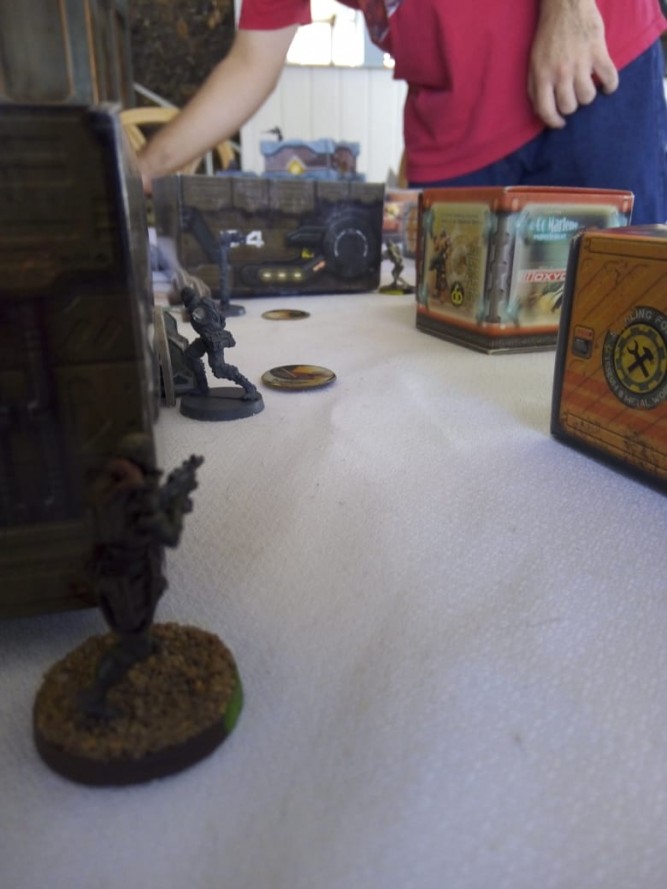 A shot from the alhawa from our left

A duet of Sekban rushed us,and detected some for of abnormal movement, an Igao was discovered a foot away from them they panicked one was shot down by the Igao's Shotgun then the otherone just ran to cover and waited for the Igao to move.

Enemy Ghulams moved to take control of two zones of operations, their short and long left.

Our Igao shot the surviving Sekban, the Surviving Draal knocked unconsious the Alahawa but the Djabanzan survived the pulzar, after that both the Draal and the Djabanzan shot them both unconsious with their template weapons vs their shock marksman rifle. Finally our clipsos revealed itself shooting down two ghulams with its boarding shotgun, however a third ghulam saw him and killed him in the spot.

They had half the zones of operations but we had the other half, they were gaining terrain but had lost many men as we did. 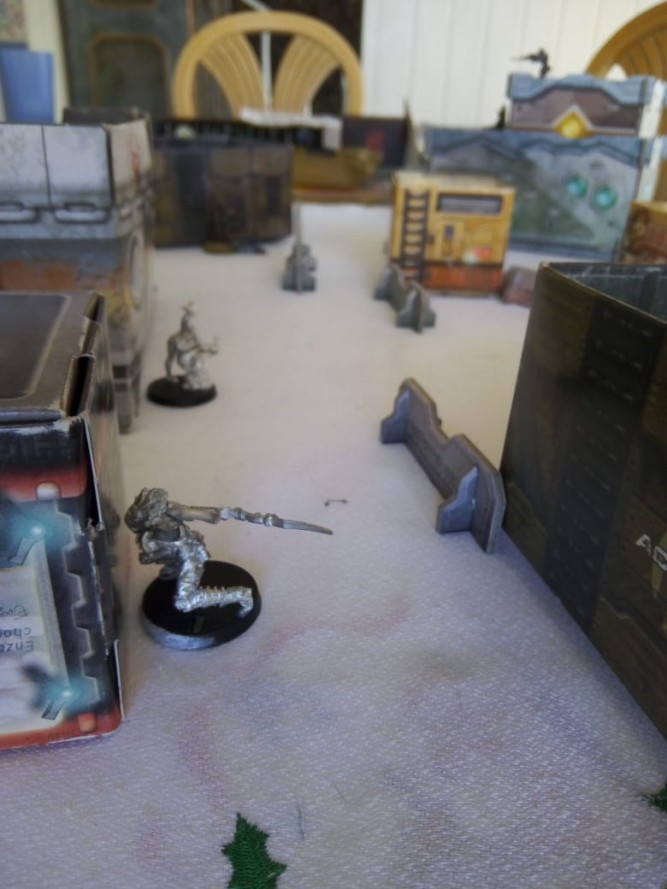 A Miraculous Change of Events

The enemy moved and tried to shoot our Igao with the surviving Rocket Launcher, the ghulam however got hit by debris before he could shot and got knocked unconscious. The surviving ghulam tried to shoot down our Brawler but this last one managed to center all its pellets on the poor Ghulam's Chest. The unconsious Alhawa tried to regenerate but some debris fell on him killing him.

Thanks to all for this incredible campaign!

Now I'm packing up and taking a ship to somewhere in the universe maybe pass by Bakunin to see how things are going there (and maybe a visit to the Vaudebilles Boubotiques, if you know what i mean), lets see you all around next year!

No one has recommended Abstruckell for commendation. Log in to be the first.