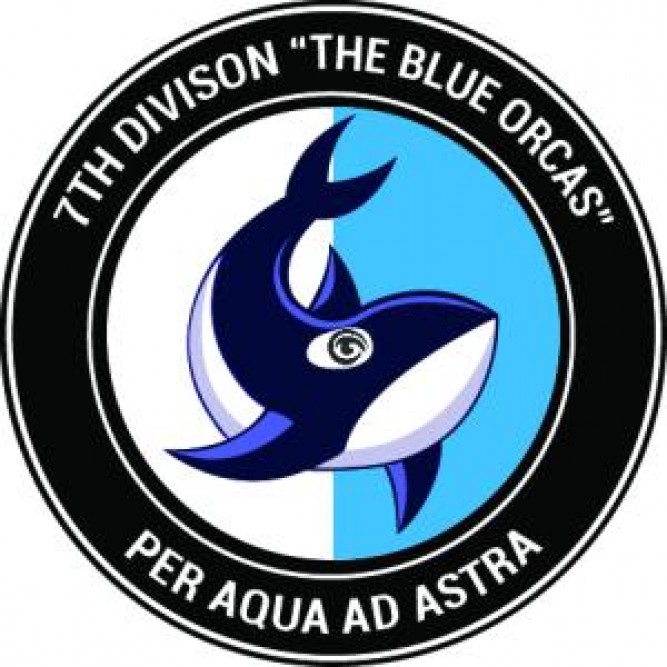 What the hell am I looking at?

Stardate 0925 47NY
It’s fairly often you encounter something crazy or hard to explain on the battlefield. It’s even rarer when crazy comes right to you. I now have to explain to command how on Varuna did a mostly disabled, smoking ship full of mercenaries, pirates, prisoners, robots, and lunatics got passed outlet defensive blockade. I even got a report from some who said there were a few on the top of the ship “rodeo riding” it as it crashed.
*sigh*
Better go investigate before they try and get in the cargo area of the base.

Sensing that my Kamau sniper in the link would be a huge problem if left alive Crimbix initiated Corregidor’s most powerful tactic. Suddenly my Kamau sees smoke from the top of a building down the field. She trains her sniper on the top of that building waiting for something to move and after a few seconds, a shadowy figure appears to be moving in the smoke. Just as my Kamau gets her sniper trained on the figure, two shots ring out from the smoke and while the Kamau was able to save one volley, the second proved fatal as the Kamau drops unconscious. Now with the Kamau sniper taken care of McMurder sets himself up to run down my right flank. Luckily, I had a Helot w/ a Light Rocket staring down the line just daring him to try something. However, it did not stop McMurder from aggressively hurling smoke grenades my way as he moved up the board. My Helot did not get a shot until McMurder was almost right next to him and wounded him with his SMG as 2 chain rifles penetrated the Helot’s body. In McMurrough’s haste though he jumped on top of the Neo Terran ship “Aurum Navis” where my other Helot, Fucilier w/ a Combi, and Spitfire Cobra all took pot shots at him and were successfully able to put this dog down. Crimbix’s last few orders consisted of moving his Moran Masai up the board to deter me from moving towards most of his units on my right side.
I started by turn by having my trauma doc crawling over to pick up the Kamau (*cough* after only 1 command token expenditure *cough*). Once healed the sniper stood back up looking to fight the Intruder that nearly killed her and spotted the sneaky sniper. It only took one order for her to bring down the Intruder, boom headshot. Now that the enemy intruder was taken care of, I decided to move a zulu cobra (with Sensor) near one of his camo markers that was being overwatched by the sniper. A quick sensor and recamo-ing revealed the model as an Assault Hacker Bandit and after two orders and 8 Assault Pistol rounds the hacker goes down.

Crimbix’s turn was mostly straightforward since, during my turn, I took care of a few of his order heavy units. He moved a hidden unit from group 2 to group 1 and moved a camo marker in LoS of my Kamau sniper. Unfortunately, this was one fight the Kamau was just not meant to win as she gets crit through the helmet and takes two shots to the chest from the second Intruder’s HMG and dies where she stood. Having completed his mission the Intruder goes back into camoflauge. Then for the next few orders of the turn, the enemy was just shuffling around camo markers and the Masai Hunter to protect his Jaguars and Camo Markers from a frontal assault. Now with two orders remaining he brings on a tomcat and cat bot in his back line to run up to the base of the building where the unconscious Intruder sniper is and wait until next turn to revive him.
Starting my turn, I realized I had no choice but to bring my ace-in-the-hole on the board, the Echo Bravo. High above the battlefield soared a fixed-wing plane, bearing the 7th Divisions logo, opens its bay door and a figure proceeds to do a HALO jump from the back of it onto the left flank of the enemy operations area. Armed with a Light rocket launcher and Boarding shotgun the Echo Bravo moves behind a building and prepares for combat. He then moves up and boarding shotguns a Jaguar from behind. Then moving closer to his next target he’s surprised by Crazy Koala and is unable to dodge out of the way from its infamous explosive hug. After the battle, he reported that either the Koala was a dud or his armor was exceptionally sturdy because he suffered no damage (passed armor save). The next four orders the Bravo increased his kill count to five by launching rockets at the Corregidor bots. His victims included a Lunakhod, Tomcat Doctor and its Tomcat, and an Alguacil. His job now done, he moved into a building where no one else could see him unless they got up close and personal with his Boarding shotgun. Patsy then used my last two regular orders and NCO order to move into a building in the central band to complete her objective as a Liaison Officer.

The remaining Corregidor troops seemed to be acting panicked with their Lieutenant now dead. They seemed to take a defensive stance wherever they are in order to try and cling to whatever ground they had. I assume hoping to not incur any further losses.

I noticed most of the enemy combatants would not see my units moving into the central area. Using a few orders I made sure to put enough points in the middle and closest zones in order to dominate them seeing as I already had the furthest one with my Zulu Lt and Echo Bravo. 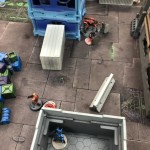 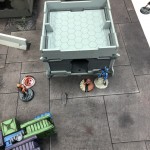 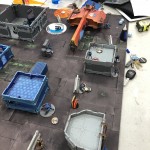 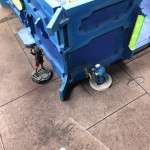 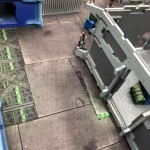 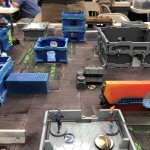 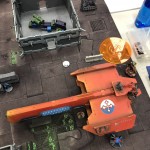