Haphazard use of heavy weapons by the Ikari Company in industrial sectors of the Operations Hub vented huge quantities of corrosive gas into a subsector of the pit. In their panicked attempts to withdraw from the sector a team of troops from Varuna ran headlong into Sun Tze and his Wu Ming team. With live fire coming their way, Sun Tze’s team had no choice but to retaliate.

[OOC: we played Biotechvore to practice for Saturday’s tournament.]

Sun Tze flexed his mental muscles and chose deployment sides, denying Varuna the chance to drop any reserves. Varuna, hoping to use their devastating sniper positions and hidden models to slow us down, elected to go second. 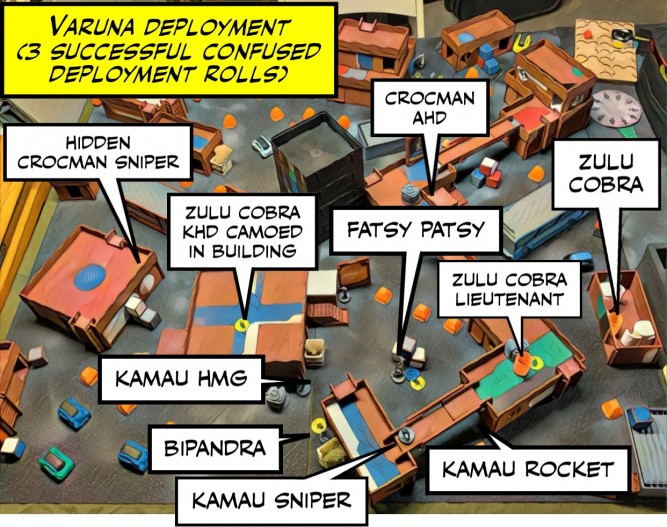 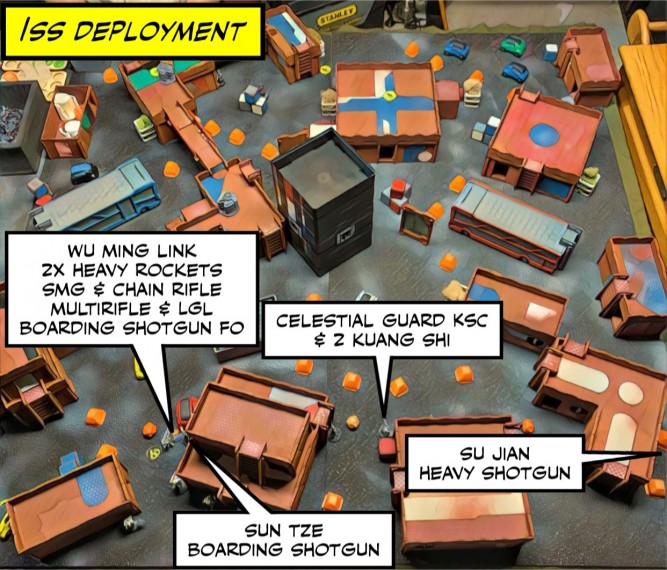 ISS started with the Kuang Shi a fire team, to stop them doing anything impetuous before they were needed. Our Su Jian moved out for an alpha strike. It charged down between the buildings on the right flank. It carefully stalled just out of ZoC of a Camo token, before moving in, discovering it was a Zulu Cobra KHD and blasting it with a shotgun.

Going prone to squeeze into the building the Zulu Cobra had been hiding in, the Su Jian lined up some shots on the Kamau & Patsy core link team and hunkered down to be a nuisance as it moved out. 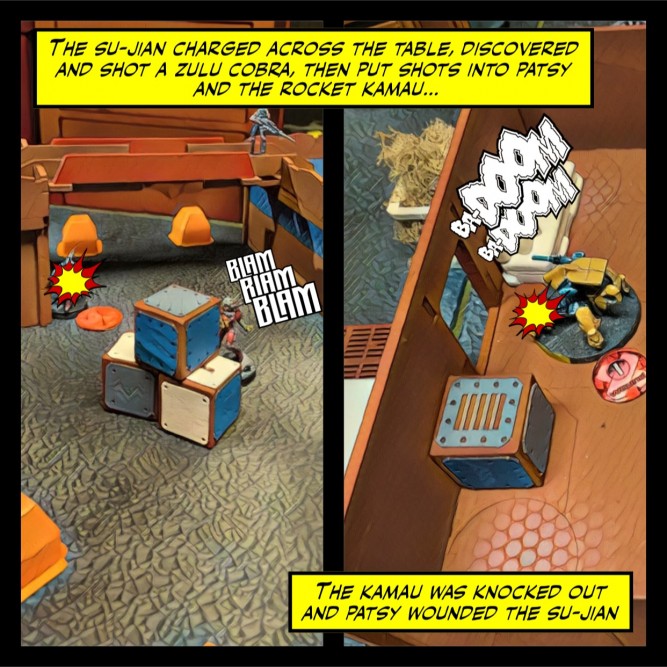 The Kuang Shi moved to the table center and then passed the core link over to the Wu Ming. They started moving through the plague zone, but couldn't resist trying to put heavy rockets into the Kamau sniper, who was no longer in a 5 man link. This didn't go well, and the link leader failed both armor rolls to a DA round, going unconscious. This broke the link, which couldn't be reformed thanks to a strategic command token use by Varuna. Oh yeah, and a cleverly positioned crocman assault hacker showed up ahead of the link, but failed to hack the lead Wu Ming

Unfortunately at this point, the turn was pretty much over... and the biotechvore plague hit. With pretty terrible luck, I failed every biotechvore BTS roll, taking a wound each on four Wu Ming (the unconscious rocket died outright), one on Sun Tze and two wounds (!) on the Su Jian, putting it into NWI. 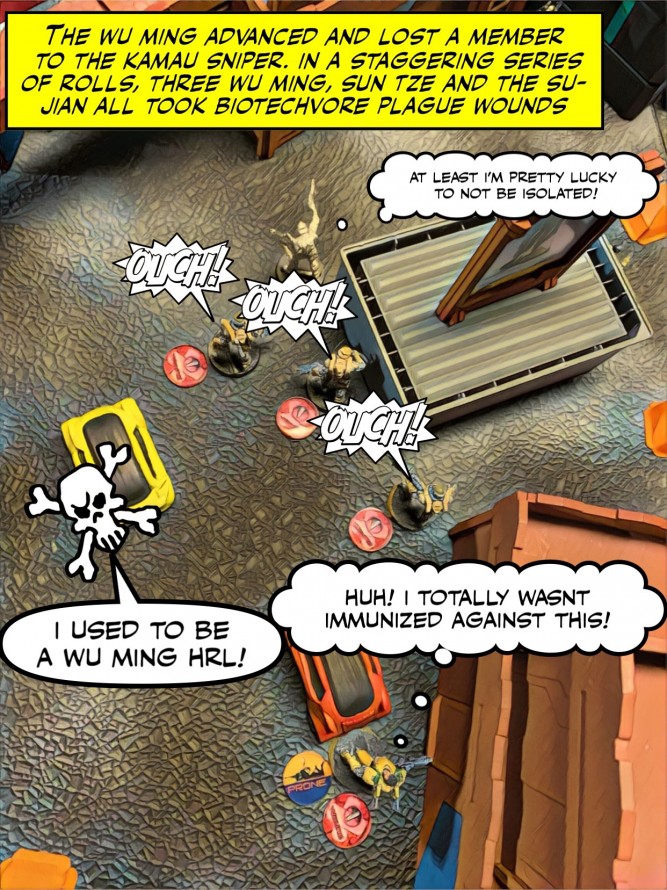 Fortunately, most of Varuna's turn was spent moving their own models out of the Biotechvore plague zone, and at least I'd knocked off two of their orders. Patsy was able to take out the Su Jian with an smg burst, though she split out of the link to do so. Bipandra healed the Zulu Cobra KHD and then with a series of coordinated orders the link and camo tokens moved up the table.

The freshly healed Zulu Cobra was able to take out a Kuang Shi with a breaker rifle shot, and the link positioned to try and limit the number of chain rifle hits they would take in my turn.

The remaining Kuang Shi dived around the table close to the Kamau hmg and put a chain rifle onto the Zulu Cobra KHD, knocking unconscious for a second time. The Kamau put two pistol shots into the Kuang Shi and caused it to explode... but sadly the Kamau made its armor save. 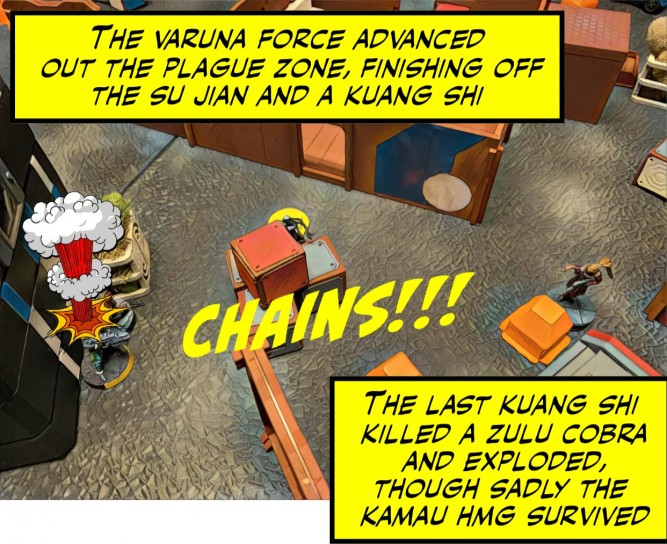 The Crocman assault hacker was a major problem for my link team and Sun Tze, so it fell to Celestial Zhou to climb the central building and deal with him. A Zulu Cobra revealed prone right next to the Crocman and failed to Jammer her. This presented an amazing opportunity for the Celestial, who spotted a point where she could get in the back arc of both models and combi them... which she did. 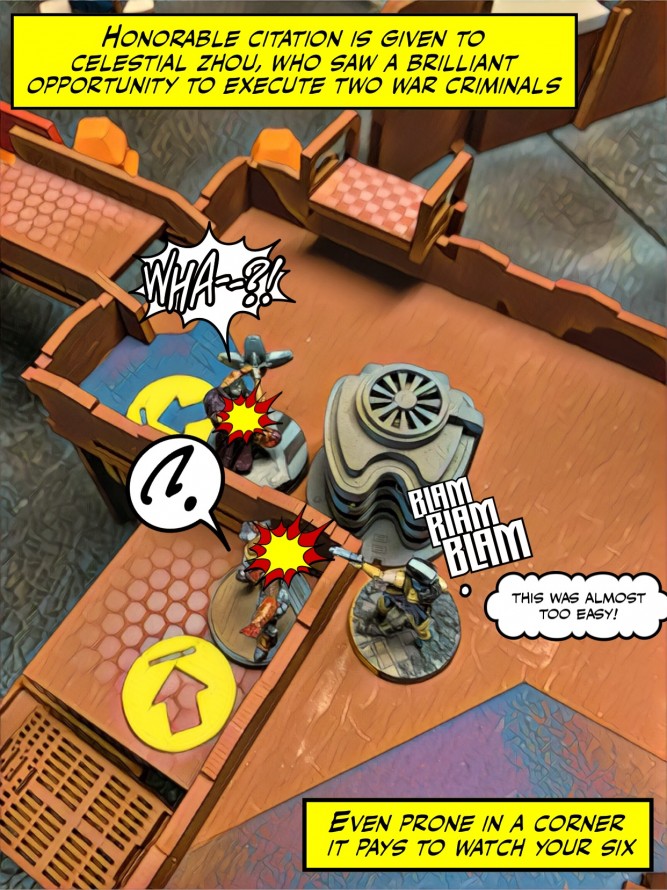 The Kuang Shi and Sun Tze were now free to move up and castle in table center, which they prompty did, not wanting to tangle with the Biotechvore Plague any more.

The Zulu Cobra the Celestial executed turned out to be the Varuna Lieutenant, so their next turn was fairly ineffectual - all command tokens had been spent on coordinated orders and link team reformation in turn 1. The Kamau sniper moved up a ladder and attempted to tackle Celestial Zhou. 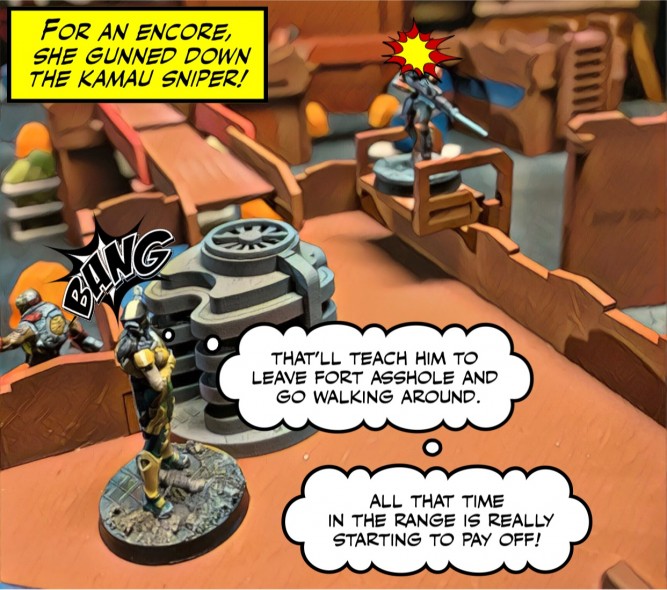 Sadly Ms Zhou's kill streak was over, as Patsy then climbed the same ladder and shot her with an smg. Still, murdering a third of the Varuna force and the most hated model in the Varuna army (or perhaps game...) was a most honourable run for her.

Having lead from the back for a while, Sun Tze decided it was time to avenge Celestial Zhou and gather some evidence, should this altercation be used to undermine the fledgeling Yu Jing and Pan Oceanian alliance against the Shasvastii. 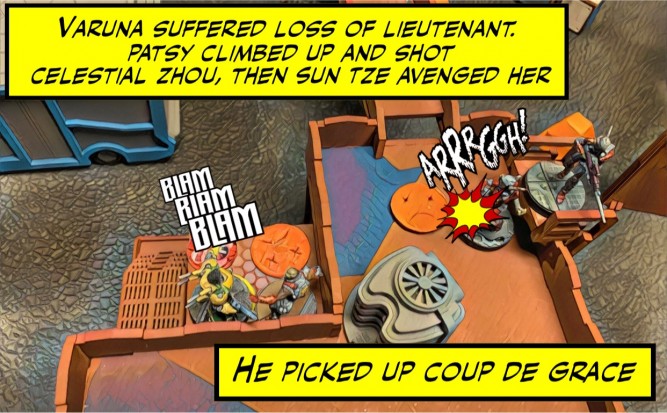 Fun fact! Sun Tze can't fail a WIP + 3 roll, so In Extremis Recovery on the green classified deck is as easy as Coup De Grace for him! 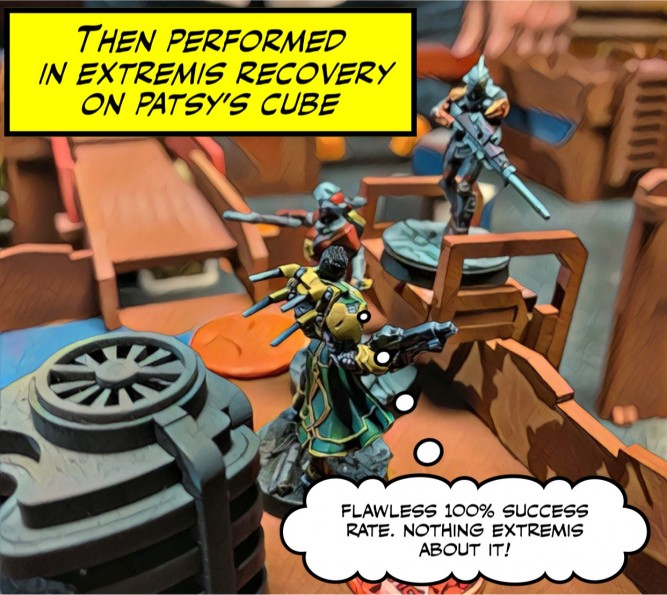 At some point here I also managed to get my Wu Ming rocket launcher killed by the hidden Crocman Sniper. Oops.

Bipandra also made a last ditch attempt to nanopulser the Wu Ming, but fortunately one of them was able to dodge and save his points. Final points totals were 116-110, giving me a tiny margin of victory as well as my classified points for a 5-1 victory.

Production of the limited edition Asteroid Blues Durian Inspector patches is complete and I have the patches in my hands. To qualify for these patches, check the patch competition open to Yu Jing generals in our in game forum. You may already be a winner!

If you're not a Yu Jing general, well you should be. Let this be a lesson to you for next campaign.

Patches not produced by Corvus Belli. Any resemblance to copyrighted fruit or Corvus Belli products absolutely by accident. Please don't sue me. Yu Jing is NUMBER ONE! 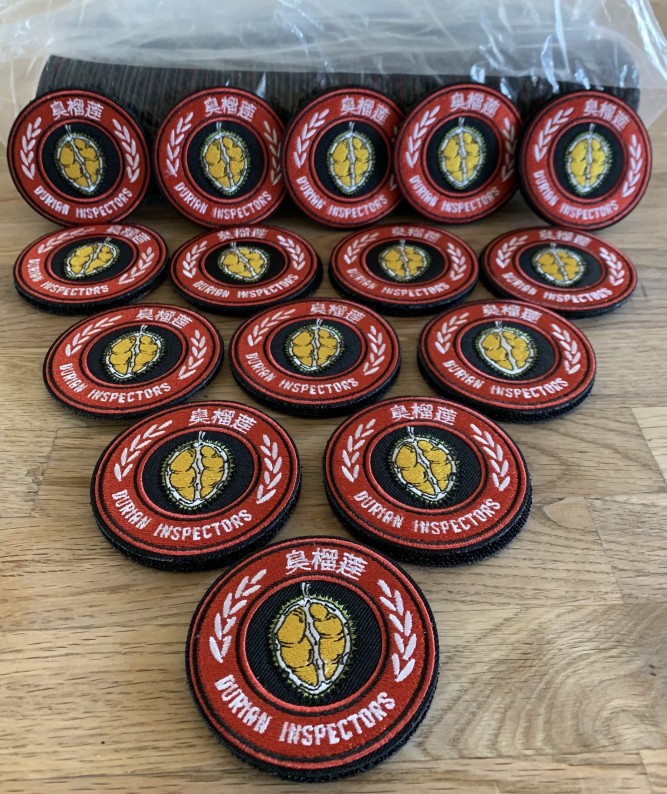 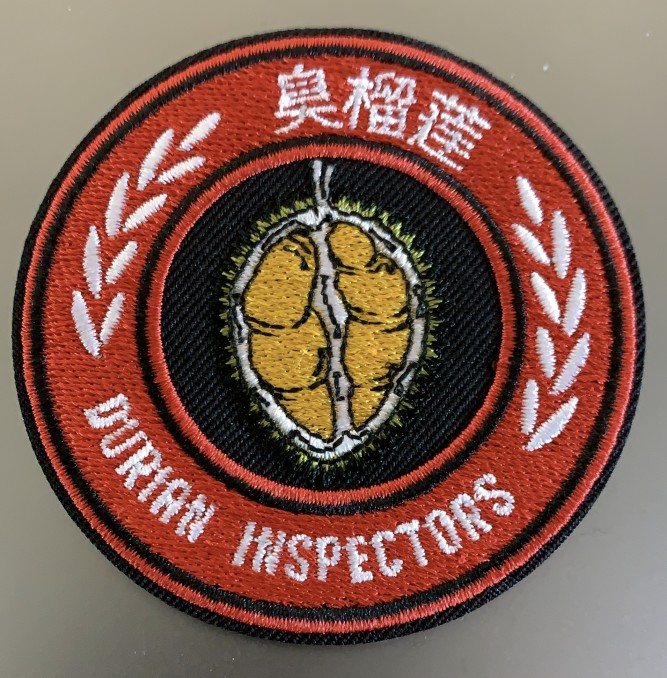