Neoterran forces deployed a fireteam of fusiliers on a central building, with a sniper covering the centre of the field. A bolt haris with a killer hacker and black friar (data tracker) deployed on the right to contest the right – most antenna, supported by a warcor and a trauma doc, while on the left an auxilia and a pair of remotes, supported by a machinist covered the left – most antenna. A camouflaged Swiss guard deployed in the centre.

Meanwhile the Spiral Corps deployed a brawler tri-core in the centre, a kriigel/reex haris, Chaksa and draal on their left, and a Kerail preceptor with suurda, chaksa and another draal on their right. In the centre were a pair of camo markers, which caused a lot of confusion! Finally Bob from accounting (an imp-2 marker) deployed in front of the remotes.

Turn 1
Spiral Corps took first turn. The Kriigel launched smoke to cover the brawler link, and one of the brawlers revealed itself to be a taagma sniper, who engaged the Fusilier sniper… Only to get killed by a pair of DA rounds for his troubles. Bob from accounting then revealed itself to be a Kiuutan, who engaged the remotes with his SMG. Some absurd armour saves and decent rolls later, the Kiuutan retreated around the corner without his symbiote and with the remotes still standing. The left most draal moved into the centre, dropping a dazer covering the HVT. Because of the sniper still standing, the Spiral Corps could only contest one antenna.

PanO started off by moving the pathfinder remote to kill off the Kiuutan, which he did, only to be left facing a camo marker dropped by the imposter. The Swiss guard revealed himself, and after wasting several orders discovering a mine covering the central antenna, decided to stop wasting time and gunned down the draal. The bolt haris moved forward, the killer hacker contesting the point while the black friar peeled off to attack the HVT. To avoid the dazer zone, he moved up on top of a building, taking two AROs from the reex escorts, going unconscious while failing to kill the HVT!

Turn 2
Seeking to regain control of the centre, a clipsos mine layer revealed from hidden deployment, shooting down the bolt killer hacker, before moving to dominate the central point, surviving multiple AROs in the process. The Kerail preceptor moved forward to engage the pathfinder, losing the firefight and his symbiote, but forcing the pathfinder to eat an E/mauler and become isolated. The left most draal moved up and placed another dazer. The kriigel haris moved forward to dominate the other antenna and cover the centre.

On their second then the Swiss guard went to work, gunning down the clipsos, kriigel, reex spitfire and another brawler, before positioning itself to dominate the central point. The remaining bolt moves to dominate the right most antenna. The trauma doc on the right starts to move towards the downed black friar.

Turn 3
With very few orders left, the Spiral Corps threw caution to the wind. A second clipsos revealed, and engaged the pathfinder, which killed the clipsos with a crit. The Kerail threw smoke. Activating stratus cloud the draal moved around the corner in the smoke and shot down the HVT, scoring 3 objective points (the draal was the data tracker). The draal then moved in to dominate the left most antenna, killing the auxbot along the way.

With victory all but assured, PanO just needed to consolidate their position. The Fusilier HMG moved on top of the building and gunned down the draal. The trauma doc then moved up to the black friar, recovering him. He then proceeded to kill the HVT (scoring 3 points) and the reex shotgun, before dropping off the building into the spiral Corp half of the table, passing a wip roll to complete the classified objective (on the fourth attempt – damn PanO wip) 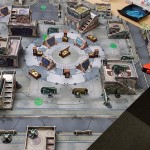 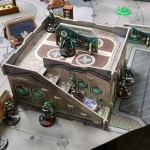 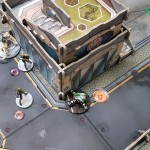 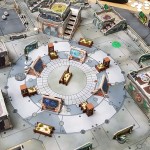 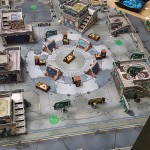