The battle was brutal. On the first turn enemy croc man tried to infiltrate the battlefield near JSA “property”, but failed and was shot by Kempeitai watching over the eastern flank with his trusty rifle and msv. Another enemy who was camouflaged managed to move very far in JSA territory near the “property”, but was shot down by daiyokai, tough with great effor (5 orders). On the western flank enemy sniper tried to headshot a Tanko with a missile launcher, but exploded to death himself, which made it possible for the Domaru led fireteam to move forward with full speed towards enemy “property” while slaying one enemy on the way, and capture it to JSA allmost at the same time as a enemy Knight had captured the one belonging to JSA. The cunning leader of the fireteam decided to attack enemies on the roof of a building and sneaked behind him from from the staircase, nut he proved to be much greater foe than anyone anticipated, even the enemy itself. As the attacked enemy knight fought of two Domarus and one Tanko, the lieutenant of the army tried charging against enemy knight in possession of JSA property, his blows could not pierce the knights armor and was felled by a hail of fire. 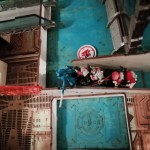 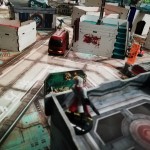 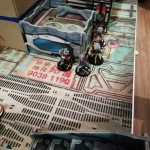 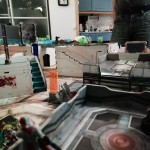