Fought At The Gallery Maze: The Chimneys
1106 days 21 hours 34 minutes ago

A simulation loads: it is a common urban city center, far in theme from that of the Asteroid Blues.

0-12 agents are in line for training against AI-controlled opponents. Their mission is to drive enemy units from the corporate district and out into the surrounding streets. Aleph take the initiative and trudge forward. Their technology and firepower are well-feared, and 0-12 troopers lie low.

Sensing that the way is clear, Hippolyta springs above the storage cubes that hid her, shrieking a battle-cry. Her mobility affords quick access onto the rooftops and overhead walkways, where she spies the shadowy form of an enemy infiltrator. Identified as a dastardly naga, the Greek heroine opens fire upon her foe with the deadly burst of a breaker rifle. Smiling as its torso falls away from under it, the Aleph operative arms a fearsome monofilament mine!!

Elsewhere on the field, 0-12’s hulking Gamma Space-Captain stomps into position atop a solid truck-trailer, loudly firing upon an O.S.S Yadu Trooper, who had been ready to lay suppressive fire along the street. The air is thick with bullets, but at last one lands home, and the Yadu ducks into cover to broadcast a status report of its injury.

Aleph is continuing to move. A Deva hacker taps into a secure network, enhancing the vision of a nearby Zayin battlebot. The Asura repositions, away from Hippolyta’s obvious position on the walkway above, wary of a descending attack. From nowhere, 0-12 calls a Lynx sniper into material form. Her shot hits home on the Asura, but fails to put her down. Sensing a myriad of dangers, Hippolyta grits her teeth as she lurches away from the deadly blast of monofilament. Her life depends on it–and many hours of training for this very scenario pay off. Her heart pounding, she lobs an eclipse grenade blindly from the roof, where it falls into fortunate position. Then she takes full advantage of the emanating screen to drop from the side of the building, deep into enemy territory.

She kills quickly and without mercy. First the Aleph Sophotect, then the Daleth bot. Only the resilience of that Deva hacker is enough to weather the storm of her breaker rifle. With a fading window of opportunity before her smoke cover clears, the Greek operative finds a new hiding place.

It is time to complete the training mission’s objectives. All remaining Aleph units surge for the central corporate office. Mines are placed into position. Suppression fire is ordered. In the last few moments, 0-12 orders Gamma Space-Captain operative G16 into combat once more, this time against an aggressive Zayin, fully backed by the presence of the surviving Aleph Deva over that AI-controlled network. Rounds blaze indiscriminately. A full magazine is emptied, and Captain G16 lowers his weapon. The bot is a smoking ruin, and 0-12 have control of the virtual sector. 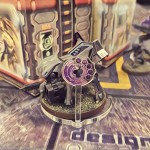 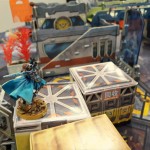 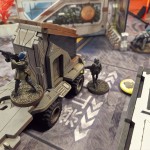 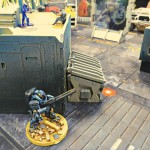