Katerina reviewed her memories from the last firefight. She’d been sent to take out a Nomad combat team reinforcing the Cosmika headquarters and had executed a very successful mission. Now, she needed to plan combat simulations based on new tactics she’d seen from the Nomad force. Her aspects weren’t used to facing large numbers of irregular troops in close quarters, but they had won the day with judicious use of superior firepower.

Delta-131, her team’s Dakini sniper, had taken out several of the rampaging Morlocks on overwatch. Morgan, their assigned Posthuman, had similarly taken his toll on the drug-addled body modders, although he’d ultimately lost that lhost to a furious barrage of fire from a Kriza Borac.

Katerina stepped in at that point, masking herself to close within range of the Kriza and then surprising the Nomad with a burst of armor-piercing fire. Several solid bursts dropped the power-armored Tunguskan goon. Katerina smiled as she watched the footage. Her recent rewrite to her marksmanship program had worked.

The Nomads attempted one final push. A combat remote flickered in and out on her recording as it made its way forward, firing at her Dakini team and ultimately taking up a position close by them. It sprayed their position down with combi rifle fire while the Dakinis’ optical sensors struggled to locate the target. Her processor indicated this remote was likely one of a kind: Π-Well, the infamous Zoe Nemova’s hand-built toy.

Katerina masked herself again and slipped by the overwatching remote, locating an enemy hacker also closing on her position. Zoe had followed where Π-Well led the way. Katerina dropped her cybermask and surprised the Nomad, blowing Zoe’s brains out in the blink of an eye. She turned back to deal with the remote, her multispectral optical sensors locating it with much more ease than the Dakinis’ more basic sensors could. She fired, but not quickly enough. A barrage of defense fire pinged off her lhost and drove her back into cover. Katerina readied herself to step out and face the onslaught again when she heard the high-pitched chattering of submachine guns. One of Morgan’s other bodies waved at her from atop a nearby workers’ apartment.

“You toasters just can’t keep up with the apex of humanity, can you, Katerina?” Morgan crowed at her.

Great, she thought. One more thing he’ll never let me hear the end of. At least they’d crushed the gang of anarchists, cementing ALEPH’s hold on the Nomads’ headquarters for the time being. There’d be another counterattack, and she’d shut Morgan up then. For now, she’d have him supervise training sims for their Dakini team. Serves him right, since he’d pinged the remote’s location swiftly enough to put it down despite its optical disruption technology. The Dakini needed a few boosts to their software, and she was glad to assign the task to someone else. 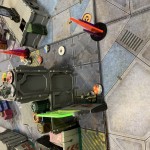 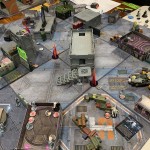 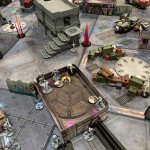