Fought At The Gallery Maze: The Chimneys
1165 days 4 hours 21 minutes ago

There's a Glitch in My Marksmanship Program!

Katerina awoke to simulated marksmanship training courses. Targets in brownish power armor fired back at her as she lined up a shot with her multirifle. Shots pinged off her lhost from multiple directions. She squeezed the trigger and placed three rounds, perfectly centered, into her target’s right eye. It dropped.

Katerina replayed her memory of the last firefight’s finishing moments. She suffered the impacts of multiple rounds as she rounded a corner, falling prone and firing at a Yu Jing soldier firing back at her with a heavy pistol. All of her shots missed. She had been firing nonstop at the target from multiple angles around the corner of a small building, seeking to put it down and make it drop the package it had extracted from one of the containers hidden in the complex. She had easily dispatched two separate hackers in virtual combat already, causing one to drop another package, and now had one enemy left she needed to deal with. Yet each and every one of her shots placed high and right instead of on target.

Internal diagnostics told her that her lhost had taken significant damage over the course of the firefight. A combat remote had landed at least one hit on her processors, piercing her body’s advanced subdermal armor and likely causing a computing error in her targeting systems. Shots continued to ping off her body, although she knew it was only a matter of time before her artificial body could no longer handle the intense punishment. She didn’t have time to check and confirm whether or not Morgan, that garrulous Posthuman, still had the package he’d retrieved earlier. She suspected he didn’t, as Morgan wasn’t cracking jokes over their internal chat at the moment. Some of her remotes still indicated they had active links, so she directed one to check on Morgan’s last location. Now, back to her power-armored problem. Time to do or die, and live again.

Katerina watched her recorded memory, slowing the playback speed as she rounded the corner low to fire one last burst at her target. She tracked each shot – her own, and the enemy’s. She saw her shots miss high and right again as her recording faded to black, alarm indicators in her HUD showing multiple shots landing fatal blows onto vital areas of her lhost. So that was why she’d needed to rerun marksmanship training after reboot. That Yu Jing soldier wouldn’t be so lucky next time they crossed paths. 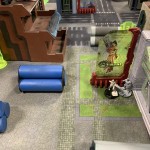 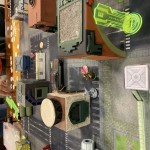 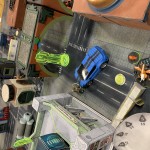