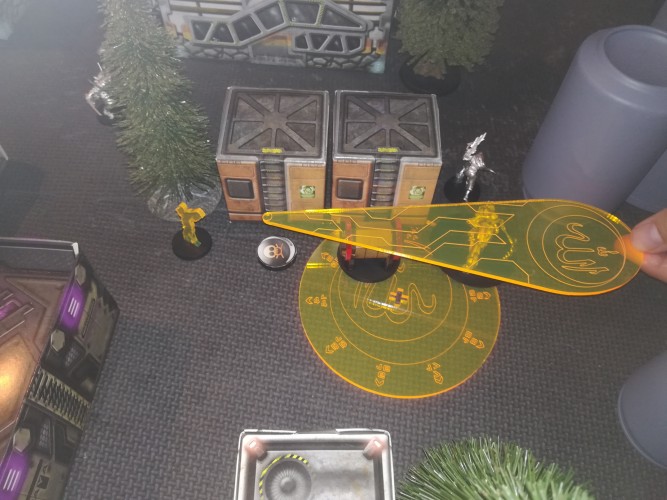 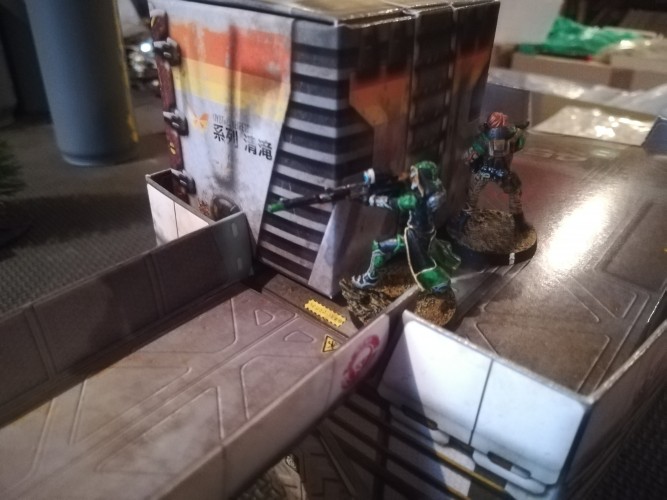 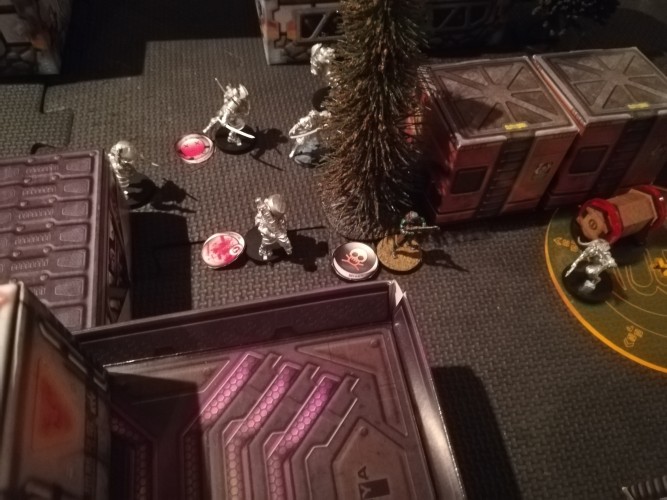 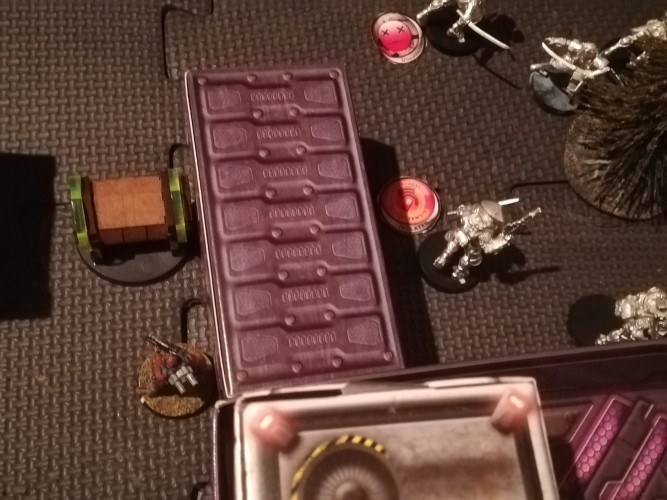 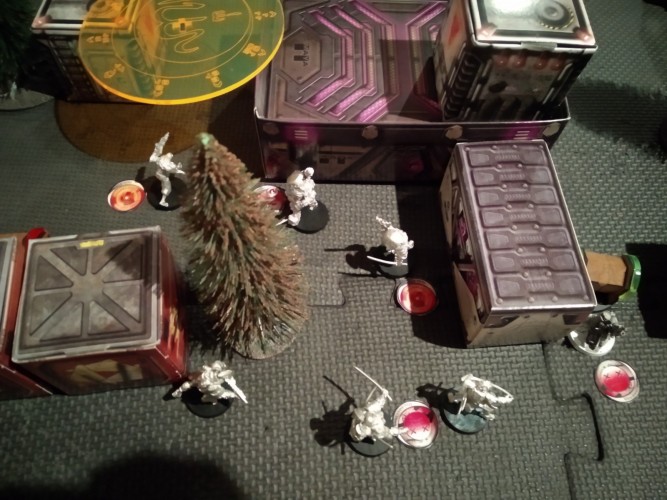 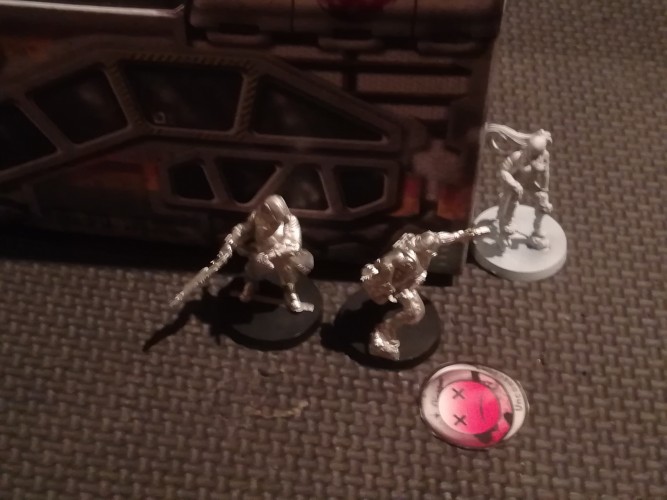 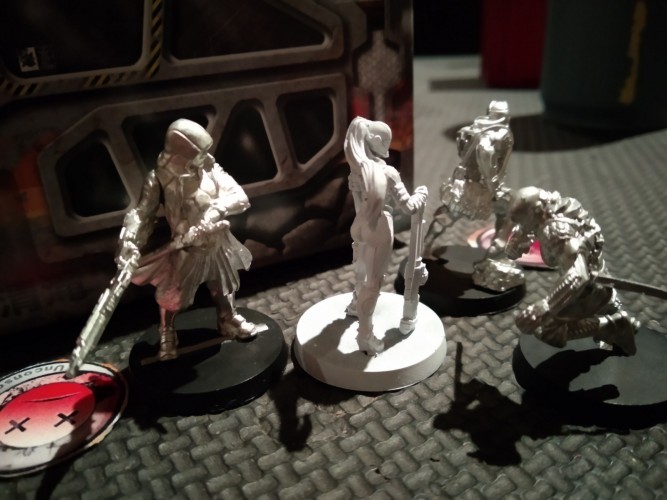 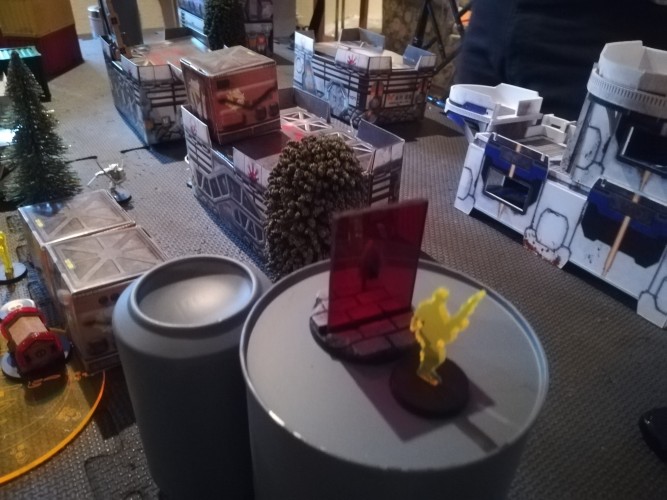 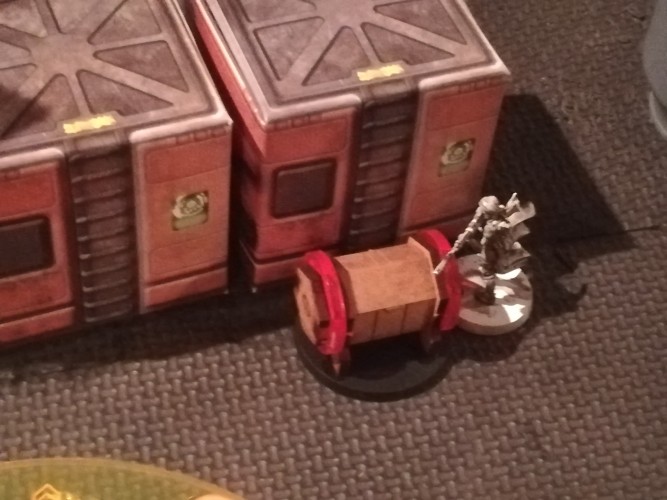 This is my first battle report, and one of the first games for my opponent (although I don't have much more experience than him). We decided to play Supplies as it is an easy mission, without using Will Bill Shadowshooters. Although it was intended as an introduction game, there were many interesting situations and both of us had a lot of fun.

"Following the orders received, our combat group headed for the warehouses where the JSA kept medical supplies illegally obtained from Haqqislamite industries. The attack took the Japanese by surprise, since by the time the alarm sirens started sounding and their troops finally mobilized, several soldiers of the Sword of Allah had succesfully infiltrated the complex. The Japanese defense line had barely formed when a mysterious female silhouette riding a motorcycle and armed with a scythe roared the engines of her vehicle and advanced towards us at full speed. However, at halfway she was shot down by an antipersonnel mine placed minutes before by an infiltrated Farzan. Despite her persistence, the Japanese leader could not continue fighting, so the coordination of the defense passed to a Kempeitai agent deployed in the rear. Meanwhile, an elite infantry fireteam made up of Tankos and Domarus, had advanced through the center of the warehouse, trying to protect the supply boxes, but they were surprised by the shootings of a Hassassin Lasiq, who killed one of them from the distance with her viral sniper rifle. At the same time, a shadow that until then had gone unnoticed was revealed as Saito Tōgan, who then threw several smoke grenades to protect the Japanese advance.

On our side, a Halqa doctor who was next to an unprotected supply box on the west part of the complex managed to collect all of its content and began to withdraw to the evacuation zone. Another Halqa stayed there securing the area in case new enemies appeared and I, aware of the importance of this evacuation, positioned myself behind cover and secured the doctor's withdrawal with my infrared viewer activated, ready to detect any of the hidden enemies that are so common among the JSA ranks.
In the center of the warehouse, the Hassassin Farzan heroically restrained the Japanese heavy infantry as long as he could, using his lethal boarding shotgun when he ran out of mines, but eventually ended up giving his life for Allah, not before forcing a high price to the infidels. His work of neutralization of the enemy center was completed by a couple of Ghazis who, while hidden behind containers and drums, activated their jammers and isolated Saito Tōgan and all the JSA heavy infantry they could, a task that they completed later with their E/Marats. Also, a FO Hunzakut tried to harass the Tankos in their rear but Domaru Takeshi Oyama shot her down while she was placing one of her mines.

In the Japanese rearguard, the Kempei now in command tried to coordinate the defense, when he saw a member of the warehouse maintenance staff a few meters to his right. Very surprised by her presence in the middle of what was clearly an enemy armed attack, he told her to stop, but the girl seemed not to hear him and disappeared behind some drums. Doubting between following her and finding out who she was and what she was doing there, or continuing to coordinate his men, who at that time seemed to need him more, he chose the latter. It was a mistake. A minute later, the paramedic Keisotsu that was half a meter to his right and that was covering a corner gave a shout of alarm while firing hurriedly and erratically his combi rifle to an enemy only he could see. Half a second later he was taken down by what was undoubtedly a shotgun. The Kempeitai agent raised then his own boarding shotgun, awaiting for the enemy on the other side of the corner. The Hassassin Fiday that appeared was faster than him, and while with one hand she managed to deflect the shotgun, with the other she dealt a cut in the face that made him lose consciousness.

At that time, an Oniwaban who had remained hidden in the area finally made presence, decided to retaliate and save the Japanese honor. Seeing that the nearest supplies were being evacuated by the Halqas and already out of his reach, and knowing that my multispectral visor would detect him without any problem in case he aproached them, he decided to kill our infiltrated agent, in order to at least deprive us of that valuable Haqqislamite tool in future missions. The Fiday defended herself bravely, but she was no match for the Japanese martial arts expert, nor for his powerful monofilament weapon.

This action didn't cause a real setback to our mission, since all Fiday agents are expected to die at the service of their nation and her neutralization by the enemy was within the expected. Seeing the good development of the mission and that the enemy was without an officer to lead them, I ordered a Tuareg that had remained hidden until then to retrieve the supply box located on the east side of the warehouse. The box in the center was unfortunately beyond our reach, since the specialist entrusted with that mission (the Hunzakut skirmisher) had been left unconscious. However, the objectives had been fulfilled, even more with the enemy HVT that was secured by a Daylami soldier who had remained discreetly infiltrated and camouflaged throughout the confrontation. For all this, I ordered the withdrawal of all our troops as well as the evacuation of the few wounded soldiers we had, satisfied for having led the Sword of Allah to a new victory."