The Brave, the Bold and the Overmotivated

+++ Welcome Commander! Your mission, if you accept, will be to activate the nearby Antennas at the Fire Control Module. This will give us an opportunity to control the Space around the Asteroid.

Do you want to accept?

Do you want further information?

Please be aware of enemy actions in the area. There is somebody on the scans who looks like Bob from the accounting departement.
Good luck Commander +++

I decided to use some loadouts that I usually do not use like a Brigada Link and the Jaguar Panzerfaust. The game was against Skylifter-1000 with his Shasvasti Expeditionary Force.
I am sorry but we totally forgot to take photos of the deployment. Shas wins the Initiative Roll and decides to tale turn 1. On the other hand they have to deploy first. From my pov there was Dr. Worm on the left together with some Taighas, an infiltrating Camo token in the middle and Sheskin with her team on the left and another Taigha.
I deployed my Link on the left side together with my Intruder, the Clockmaker and my Lt. On the left are the Jaguars, and the Alguacil Hacker. Shas last miniature is Bob from accounting (aka Speculo Minelayer). My last miniature is the Moran FO who deploys on a roof with one Koala close to the middle antenna and the second one close to Bob. Bob’s Mine ist deployed next to my HI-Link. I decide to spend a command token to take 2 orders from the 1sr combat group. And so it begins…

Turn 1 Shasvasti
One Taigha on the left approaches and triggers the Koala close to Bob. The Taigha dies to a missile and the Koala. The mine next to the HI-Link triggers and cost the Brigada ML and the Brigada MRLF one wound. No it is time for Bob to shine, and SURPRISE (!!!) Bob is in fact a Speculo Killer. He deploys a new mine, throws Smoke recamos gets into base contact with the Intruder and kills him in CC. The Taigha on the left moves in CC with the Jaguar Panzerfaust and kills him by using the Berserk-Skill. But unfortunately the Taigha also falls unconscious. Now it is time for revenge!

The HI-Link advances to the antenna on the left. Before activating the antenna the Brigada BS discovers and kills the Caliban CoC, then Lupe acticates the antenna. Due to bad movement the Malignos reveals and gets a free shot at the Brigada MRLF and kills him with his SMG. Now the Tsyklon tries to kill the Taigha on the left. It is succesfull, but falls unconscious 1 because of the chain colt. The last remaining ordes are spent to move the clockmaker in the direction of the Tsyklon. So all in all some terrible losses for the Jurisdictional Command.

3 orders are spend by Skylifter-1000 to move Sheskin (Schätzken, which means something like cutie in German but is almost exactly spelled like Sheskin) and her team over the battlefield. After the approach she can kill the Clockmaker and the Brigada BS. Then the Malignos activates the antenna in the middle of the battelfield. Now Sheskin makes a momentous decision and decides to shoot the Brigada ML. She kills the HI.In this moment the Nomads fall into retreat and Skylifter realizes, that he has only 2 orders left to fulfil another mission objective. The Malignos runs as fast as he can the the console on the Nomad side of the battlefield. He is unaware of the Alguacil Hacker but survives the shot from the Combi Rifle.

Nomad turn 2
So I am in retreat and have only 4 orders left. I spend my remaining command tokens to turn irregular orders into regular ones. I realize, that the only way out of this almost hopeless situation is to kill the Malignos at the console. And it is the Moran’s duty to do that. But he fails on the 1st try. On the other side of the table a Noctifer reveals and manages to shoot a missile at the Moran. But then it happens! The Moran survives a direct hit from ther Missile launcher. He can try to kill the Malignos again and as the last action of the game he kills him but gets killed by another Missile.

Skylifter and I have the same amount of antennas and we have defended our consoles.

I want to thank Skylifter for an incredible game. The dice were not my friends this day, but it could be a lot worse. The draw was the best result from my point of view, considering the overall gameplay.

Thanks for reading and feel free to C & C!!! 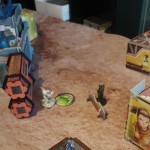 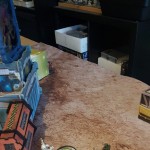 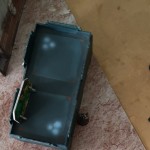