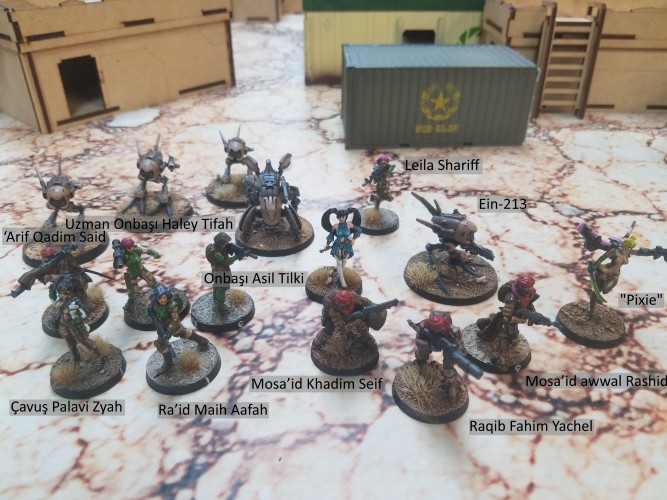 Looking away from the novel she was reading, Maih sat up in bed, a small window showing the twinkling black outside the asteroid, and the myriad of ships passing by. Mentally opening the message, a black and red alert flared in her vision, “Confidential. For Unit 29 Leader Ra’id Maih Aafah, Ramah Task Force Command Razia Detachment, Priority Mission 1.”

Opening the file she read a quick mission brief, “Mission: Disarm Pirate force stationed on Novvy Bangkok. The pirate gang, alias, Red Moons, have been stockpiling weapons and are believed to have attained illegal voodoo tech weaponry. Primary goal of this mission is to retrieve these weapons, and intel within the shipment. We have reason to believe this gang is working with a splinter of the Shasvastii Expeditionary Force. Lethal Force is authorized.”

Finishing the document, she closed it and hopped out of her bed. Grabbing her body armor, she slipped easily into the form fitting vest, and slung her rifle on her back. Heading out the door, she waved to some of the unit in the hallway, “Gather the rest of the unit, we have a mission. Be quick, mobilize in conference room 3, I will meet you there. You have 10 minutes.”

“Nem naqib!” the two men saluted, and ran off to gather the rest of the unit.

Ten minutes later, the conference room was packed with the men and women of Unit 29. On a large screen on the front, an overlay map was displayed of the warehouse complex that the pirate gang, Red Moon, owned and stored much of their supplies and plunder within.

“Our mission is simple, we need to get into this warehouse belonging to the Red Moon pirates, and steal the info and materials of these three crates.” Aafah pointed out three areas of the warehouse with crates. “At this time Red Moon should be out on a raid. The adh-Dhiʼb has informed me they are tracking the pirates vessel and will be alerting me if anything changes. We will neutralize the guards, slip in, take the items, and leave. I want nothing that can track back to us. Understood? I am pinging the roster for this mission. You have authorization for ammo from the quartermaster. Meet me in cargo bay C in 30 minutes. Move out.”
—————————————————————————————————–
One hour later, the soft thud of a body hit the ground around the corner of the semi-lit hallway as the massive form of Fahim slipped back into cover, sliding the bloody scimitar back into its sheath. His graceful movements add odds with his large bioengineered body. Looking back at Aafah, he nodded, his steely eyes locking onto hers as he gave her the all clear.

“Unit 29 move out. Leila, your on quantronic duty, keep an eye on the net.” Aafah said, stepping over the body of the pirate and into the massive warehouse. 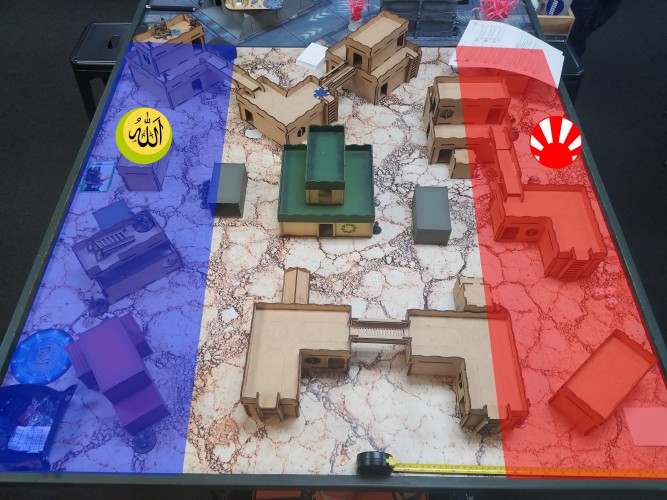 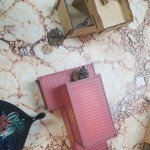 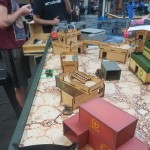 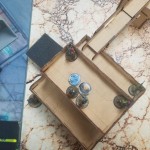 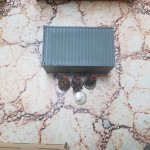 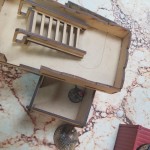 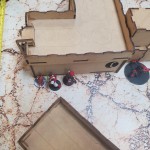 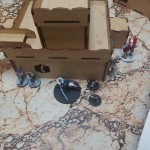 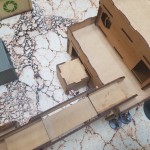 Her soldiers and remotes fanned out taking predesignated positions, the khawarij bounding ahead, taking point. Fahim and his unit crouching behind a shipping container as he unslung the spitfire from his back. As she got acknowledgements from the group, a message pinged for her, “Rafiq Ein-213: Unknown Hostile Force Sighted, Japanese Unit designations, Unverified.”

“Acknowledged Ein-213. Unit 29, we have unwanted company. All targets are to be considered hostile, this operation is ours. Engage.” Aafah said over the communications net.

Fahim and his squad bounded over the shipping container, their super-human strength throwing them into the air and after the first objective. Facing no enemies, Fahim nodded to their Doctor to retrieve the cache as they stood watch. Khadim took his shotgun and blew the lock off of the crate, and looked inside. He saw nothing of interest until he moved aside some boxes, and saw a small number of strange looking weapons, and a holodisk. Grabbing the weapons, he stuffed them in a satchel, and put the holodisk in another. Nodding to the others, they quickly left the room.

Back on the warehouse floor they made their way to the next objective, leaping onto a second floor storage area, Fahim saw the hulking, demon looking form of white armor around a corner.

“Daiyokai!” Fahim yelled, twisting in mid-air, and giving an accurate burst of fire from the spitfire. A shot found home, knocking the armored beast back slightly. The team landed on the second floor parapet, and rolled behind the low wall. “Engaging.”

Rolling along the wall, Fahim stood up, and put several bursts into the armored behemoth before it finally collapsed under the extremely accurate shots. Nodding to the others, he remained at the wall, keeping the light machine gun up, and trained.

Khadim ran for the box, and with another blast of his shotgun, blew the lock off and began rummaging through the contents, “I don’t see anything here Ra’id Aafah.”

“Something should be there, but look sharp, Japanese forces are moving on your location.” Maih responded.

Smoke began blossoming on the far side of the warehouse, and the roar of a motorcycle could be heard.

“Its Yojimbo, I got him!” came the voice of the Khawarij Heavy Rocket Launcher specialist, Qadim.

The loud backblast of the rockets could be heard, and Aafah watched through the smoke as the ronin drew his blade, quicker than lighting, and deflected the rockets to explode in fire on the building behind him as he road passed, “Allah have mercy…”

Several samurai moved up on the Khawarij squads position, and a hail of shrapnel took over the area around the objective, “Take cover!” Fahim cried out to his team as they all scrambled for better cover from the samurais molten shards of metal.

“Ra’id!” Leila’s voice came over the net, “I think an Aragoto made off with one of the objectives, their smoke is hiding them!”

“Then hunt them down, you and Ein go get them!” Aafah responded.

A gleeful giggle suddenly sounded on her voice-net, “Oh Ra’id, you could not possibly have left me behind could you?”

“Pixie? You weren’t on the roster! What are you doing here?” Aafah yelled angrily into her comms.

“Oh my sweet, don’t you worry!” the bubbling voice replied back.

Pixie raced through the warehouse floor, towards a ladder leading up behind the samurai. Her steps light and quiet, her tiny form barely touching the ground as she glided up the ladder, the small fae like woman leaped onto a keisotsu doctor from behind, her giggling, the last thing the japanese woman heard before a viral scimitar appeared out of her chest. As the woman slumped to the ground, hard, the domaru turned, and drew his two swords, staring at the small, blood speckled grinning woman.

“Oh, you be a big one, ain’t ya? This should be fun!” she exclaimed, racing forward, swinging the blade with uncanny speed, but the armored samurai was faster, ducking under her. The massive samurai moved with nearly as much grace as he sprang to his feet, twisting around, and swinging both swords into the Nahab from behind, only for the tiny warrior to twist at the last second and catch the blades with hers. Bracing herself against the wall with both feet, the tiny woman stopped the blades cold with inhuman strength, “Oh lad, you are going to need more than your big armor for me!”

Cackling, the Nahab whirled, trying to find a space to land a blow but the samurai was matching her blow for blow and neither could get an opening, years of strict training and martial tradition, versus raw natural fury. Not far off, on the other side of a bridge, with the objective, Oyama was putting burst after burst of chain shot against Fahim, as he ran backwards and dove off the edge, his weapon shouldered and putting his own shots into the armored body of the samurai. Hitting the ground, he noted the shots stopped. Leaping back onto the platform, he landed gracefully by the bullet ridden man.

“Khadim get back to the box, we need to help Pixie out of the mess she made!” he yelled.

“I can hear you, big oaf! I am in no mess!” came the woman’s high pitched rebuttal from across the bridge.

“I got it, let’s move!” Khadim finally said, and the three bounded across the bridge, pulling their scimitars. Fahim got to the fight first, and knew instantly, he placed his blow wrong as the samurai simply gut punched him with his powered armors full force, cracking his chest armor plating, and knocking him out cold. As the samurai turned and swung at the Nahab, she blocked the blow, and locked the blades, slamming them flat into the wall with her arm and pinning them. 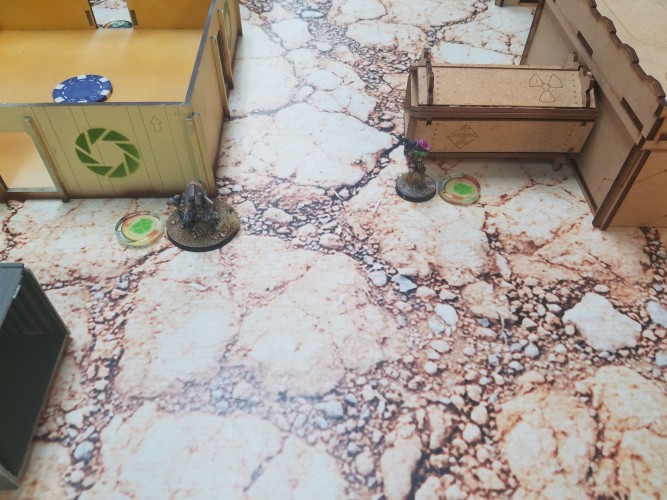 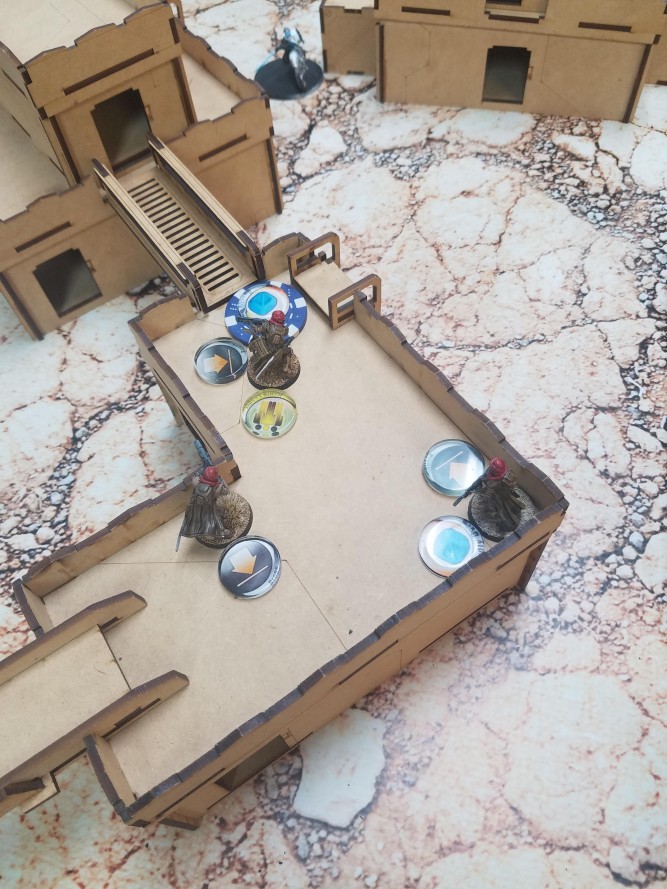 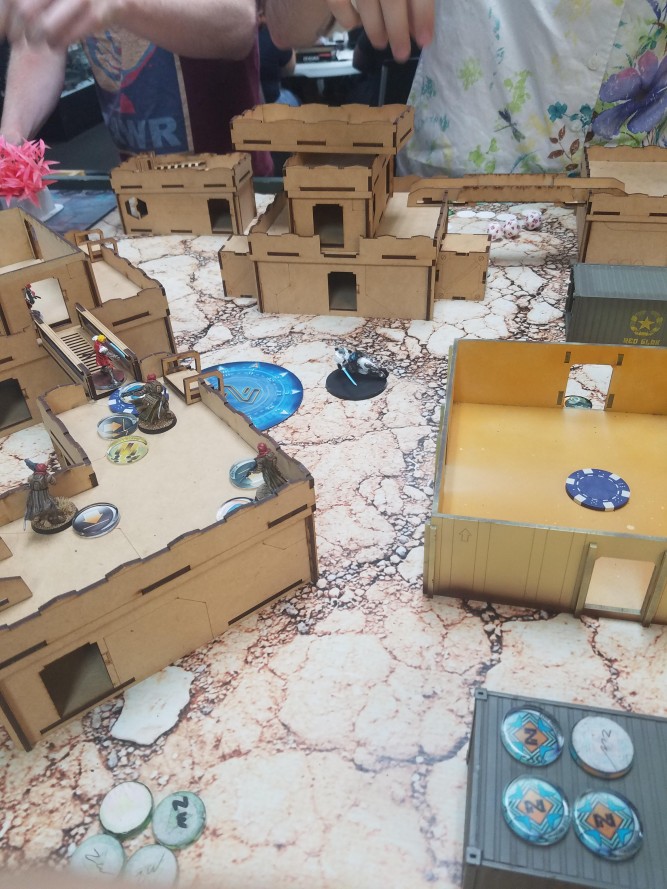 Yojimbo is on the move! He is so fast he cut two rockets out of mid-air! 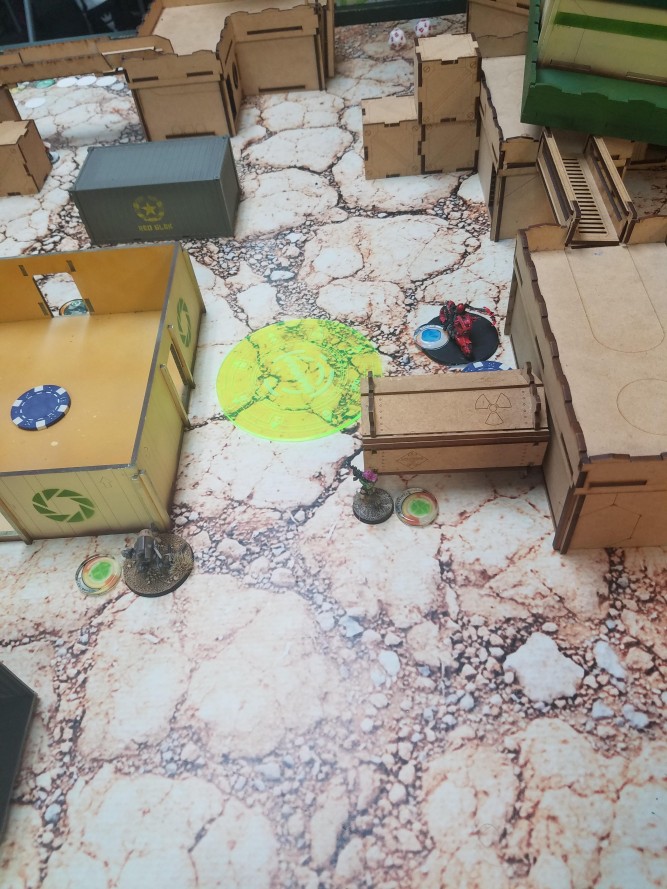 “Get him ye red headed oafs!” she yelled.

The two remaining khawarij, swung into the samurais back, their blades biting deeply, and downing the power armored warrior. Khadim instantly sheathed his blade and checked Fahim, getting the man back to his feet, and giving him some pain killers. “You okay there brother?”

Coughing and gasping, Fahim picked up his spitfire, and nodded, “Nem fiela.”

Moving to the door, Fahim took sight of a distant Yojimbo, checking around the corner of the central storage building. Sending off a burst of shots into the mercenaries back, he collapsed. “Alright, lets move out, we need to go hunt down that last cache the aragoto is making away with.”

It took little time for the unit to converge on the aragoto who fired a few shots before Fahim put her down. With silence overtaking the warehouse, he marched up to the bottom and retrieved the satchel holding the cache she had made away with.

“Ra’ib, mission is accomplished.” he radioed in. 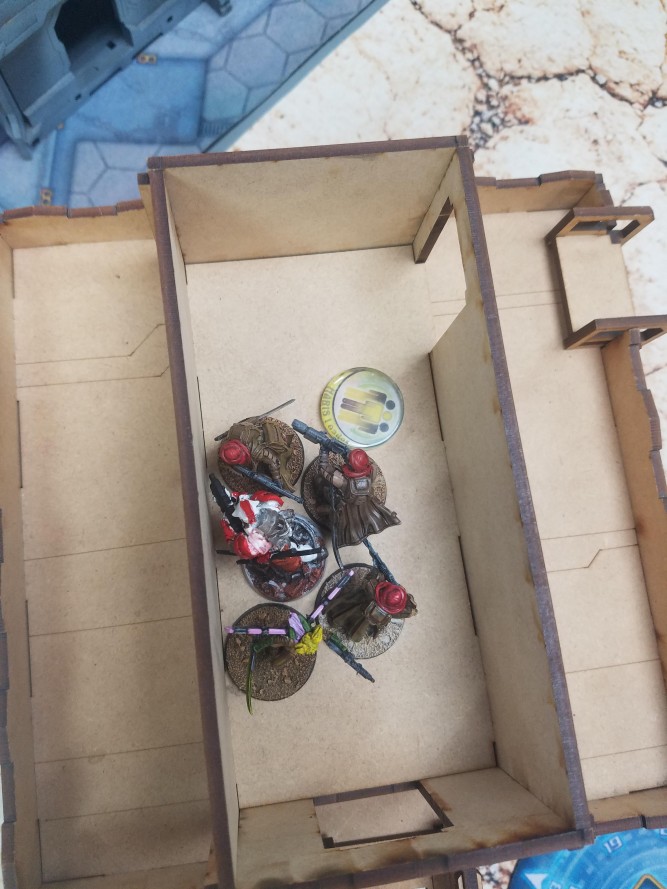 "He cant stop us all, boys!" - Pixie probably