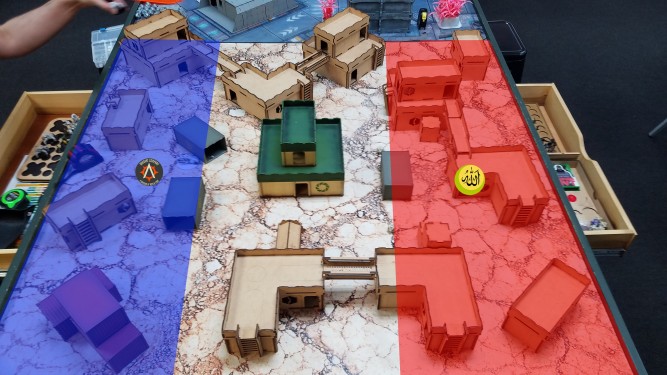 I hope everyone is seeing a pattern here! I promise next battle will be on the table next to it! 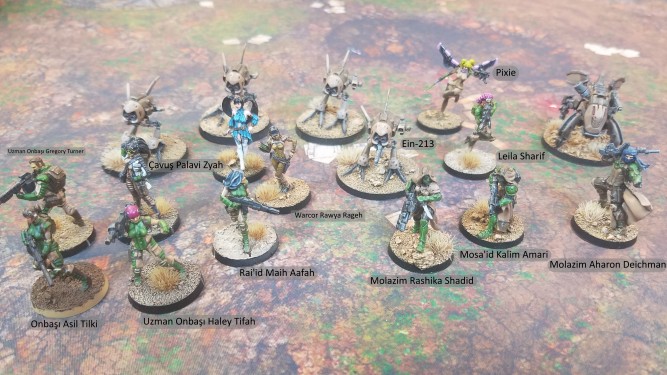 The clink of bottles and glasses rang through the air as congratulations and cheers erupted. It was funny seeing a large super-soldier blush, while the tiny woman on his arm poked him in the ribs.

“Congratulations to you both! Fahim Yachel, and Palavi Zyah! Barakaka Allaho wa Hadaka!” Aafah said, raising her bottle for another toast.

Many of the unit stood in groups, cheering around Harries Bar, a large and popular watering hole on the strip, and seemed as best a place as any to celebrate the news of the units two most popular members finally becoming engaged. Music began playing, and Aafah turned to her after action reports she was still behind on, swiping them around, and letting Sybila do most of the work while she agreed or disagreed with what was presented. Suddenly an angry red alert came into her vision, and her brothers face appeared, “‘Aqid Fayaz, what w ond-”

“Sister I dont have time, you need to to get to a safe location now!”, Fayaz said hurriedly and with notable worry, “The adh-Dhi’b intercepted a communique. The Dahshat want your head. It's a sizable sum and is an internal bounty. Get out of there!”

Slamming her drink on the table, Aafah turned to her unit, “Grab your weapons and armor, move! We have sharks in the water!”

The majority understood immediately, dropping drinks and food, and loading and checking weapons. A few did not but quickly picked up on it with the rest. They began moving together out of the bar, onto the street, making their way back to the Hangers when a machine gun opened up into them. 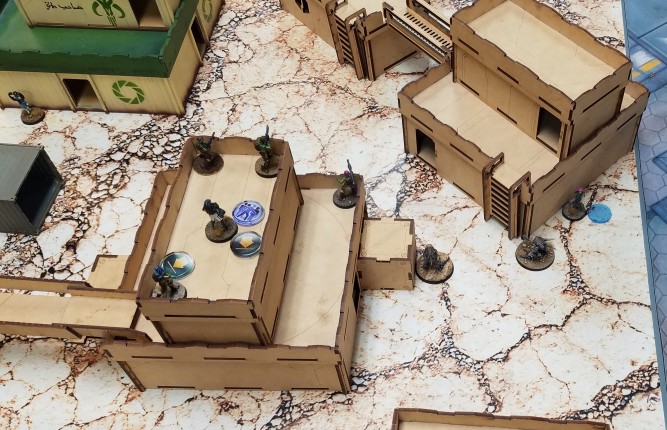 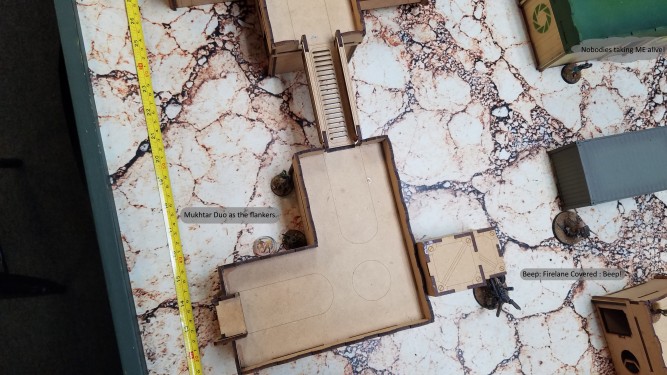 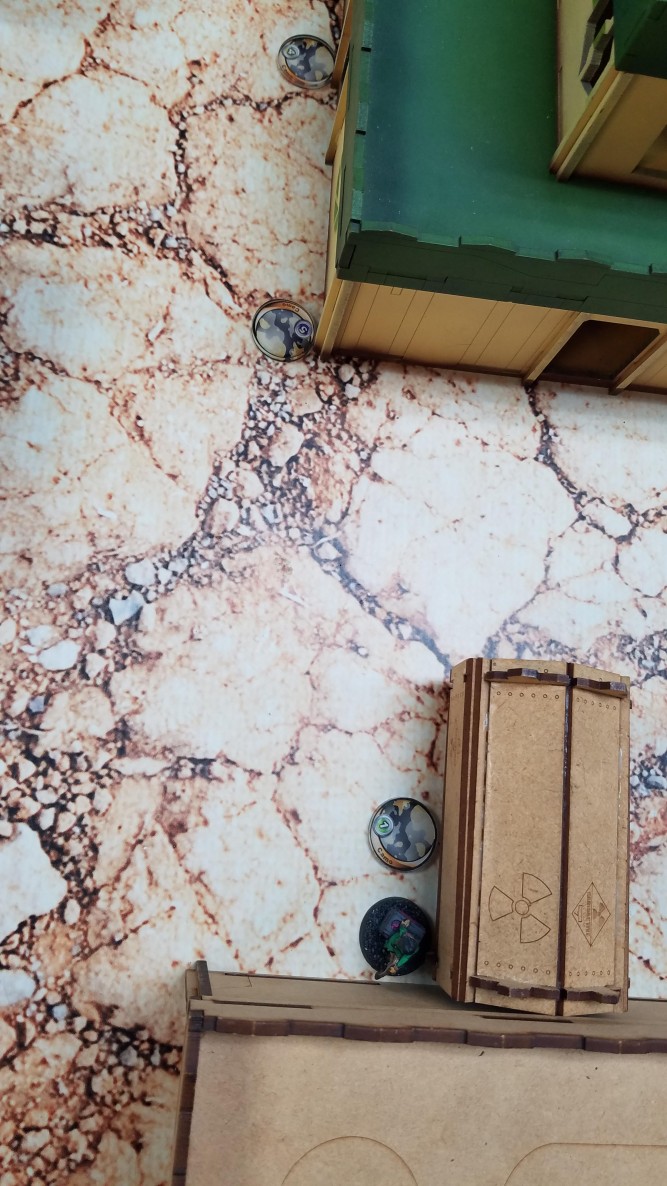 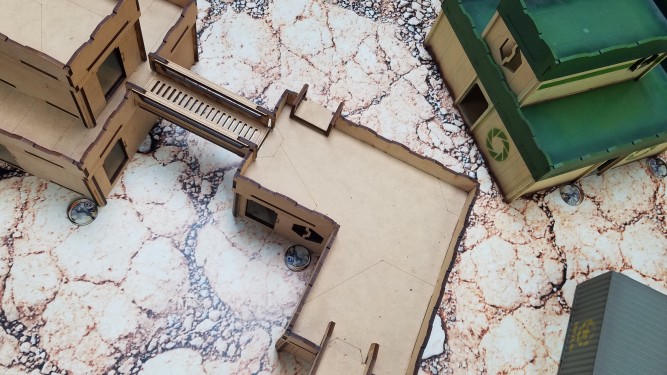 More camo token! This is why I always take Sensor... 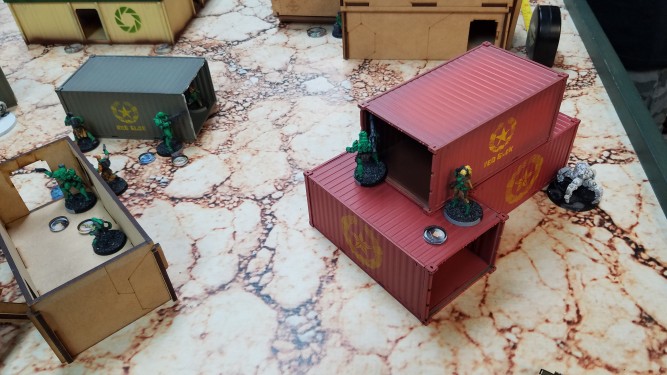 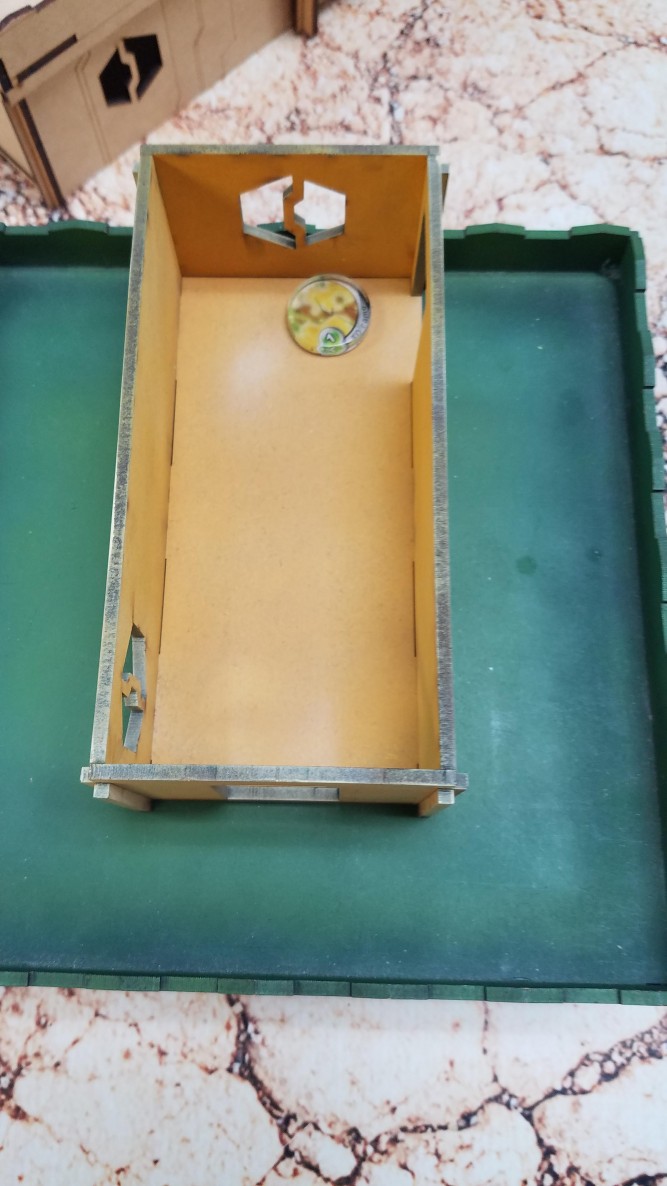 So sneaky! Unfortunately the Zuyong are just very hard to hack with TinBot B and Valeria...even when unopposed!

The machine gun fire did not let up, and hit Tilki and Turner square in the chest sending them onto their backs, blood pooling. Tifah followed shortly, barely able to bring her missile launcher to bare before rounds found her. Leila got Ein-213 online only to watch it get riddle with submachine gun rounds, followed by the fanous escort with it.

“Allah preserve us, I don’t know if were getting out of this one Ra’id!” she yelled across the street.

“Fight to withdraw! Move! If you can break and get out, go! Return with help!” Aafah messaged her unit, then contacting local command and the adh-Dhi’b she messaged, “This is Ra’id Maih Aafah of the Razia Detachment, requesting support, we are under attack by sizable forces on the Strip bearing Dahshat Company IFF. I repeat, request immediate support on my beacon.”

An explosion and the disconnection alert of the units guardian remote flashed across her vision. The two Mukhtar with them, Shadid and Amari both moved up, taking the opportunity of a small break in the lines, as they got onto the street though, Shadid took several rounds and collapsed, cursing, Amari hefted his shotgun and ran forward, coming around the corner of the building, he came face to face with the primary force. “Allah guide me!”

The shotgun rang out, shredding many of the Dahshat force, and putting holes into the Zuyong members armor, before retreating through a door inside the structure. Reloading, he looked up to see another Zuyong aiming his rifle straight at him, “This is not-” 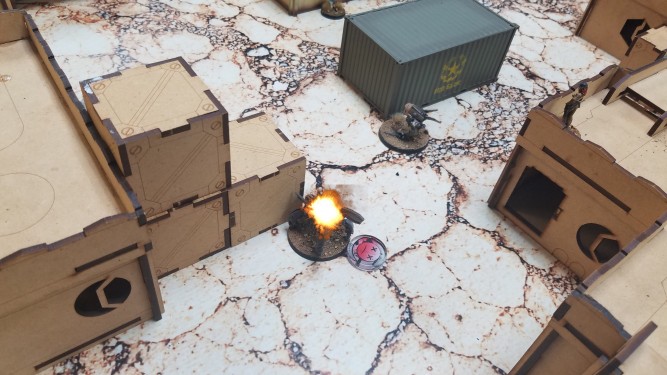 The HMG Bot was not long for this world against a linked Zuyong HMG. 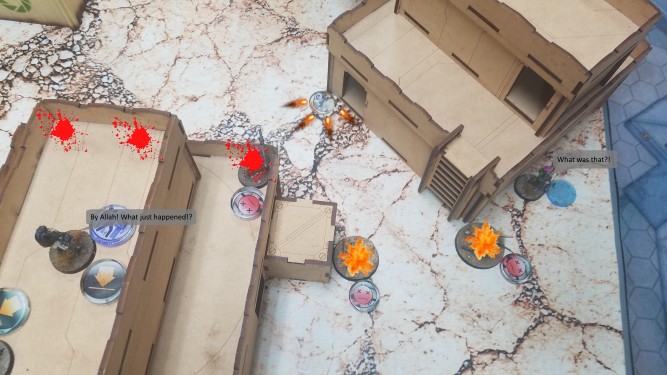 This Zhencha FO with SMG did a lot of murder.... 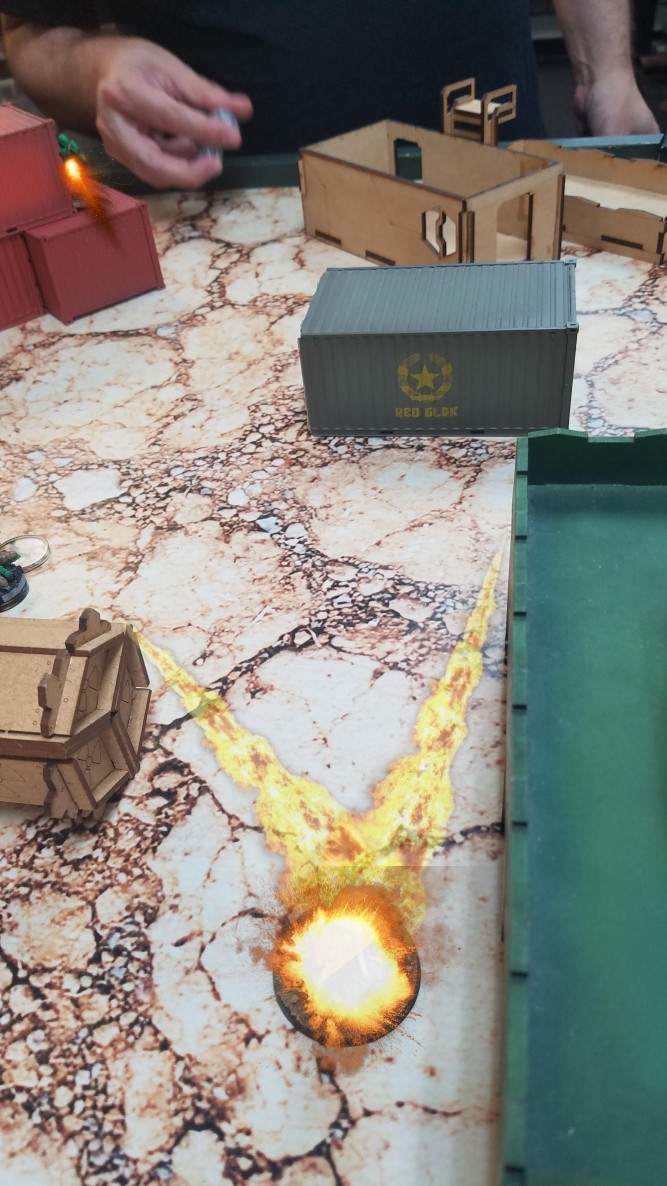 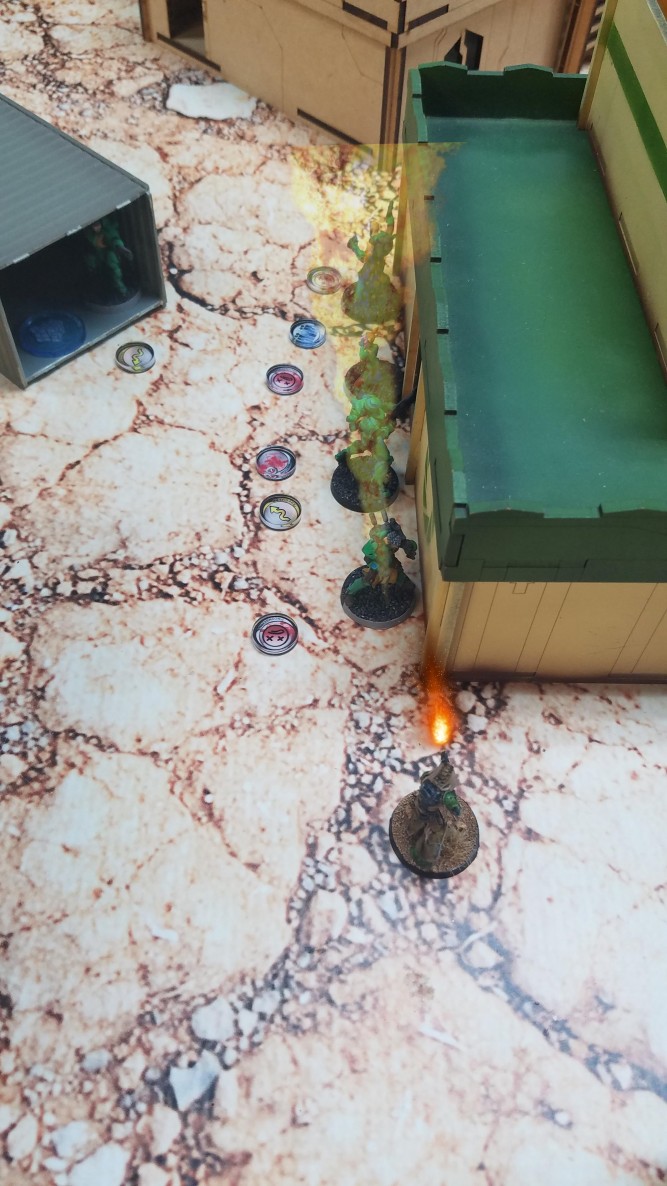 The Muhktar Doctor went on a short lived rampage! 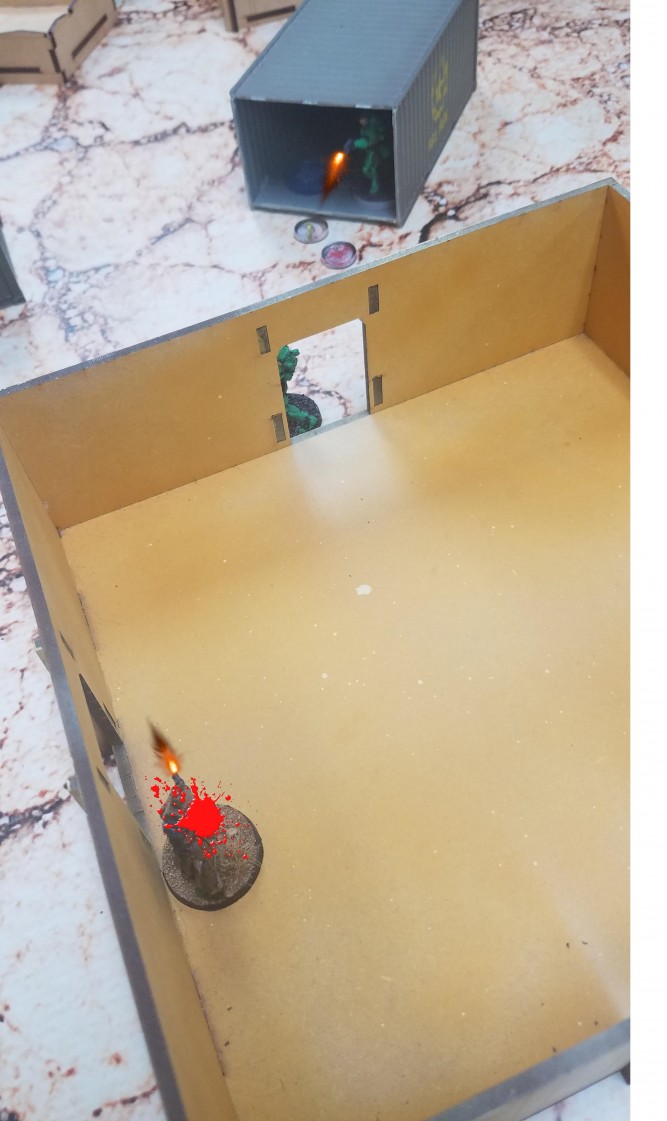 He thought he was clear and safe...

Amari’s body slumped onto the floor. Taking note of the situation and seeing most of the front crumbled, Aafah nodded to Zyah, “We need to get out, go! I will cover you. Here take this.” Aafah ripped her cube out, wincing slightly, ”Give it to my brother. Given my rank and necessity here, I was provided a replacement lhost. He knows where it is stored. Now go!”

“Ra’id, Maih, I am not leaving you. We can get out together.” Zyah said, racking a round into her underslung shotgun, and synching down her medical pouch.

The sound of heavy armor ascending to their hiding position rang out, and as the face of the Zhencha appear, Zyah squeezed the trigger. The shotgun rang out, but the lighter heavy infantry shrugged it off and stood up onto the roof. Aafah hurled the doctor behind her, “Run!”

“I told you to run.” he said admonishingly.

“Shut up and get me some clothes, your ship is freezing.” Aafah said, clumsily grabbing at the side of the incubation tub, and sliding around.

Getting out onto the metal deck plates, Zyah provided a towel, and a nutrition pouch that Aafah hungrily drank. Tying the towel around her chest, she turned again to her brother, “Keep an eye on the channels for me, I know they wanted my cube. My head I am sure was worth something, but it's not a true death.”

“Satakun mawt kli min nafsi wawaldina.” Fayaz muttered as he turned to head out of the room.

The doctor nodded, and gave a small smile, before hugging Aafah suddenly and very tightly, “They took a bit of time to realize they didn’t have your cube.”

Aafah gave Zyah a quick hug back, slightly surprised, before separating. They had watched each others backs for years now. Their friendship was held higher between them than Maih had realized.

“Good, were not going to have as much free space as we did before now. Keep your eyes open. Now, where's my uniform and rifle?” 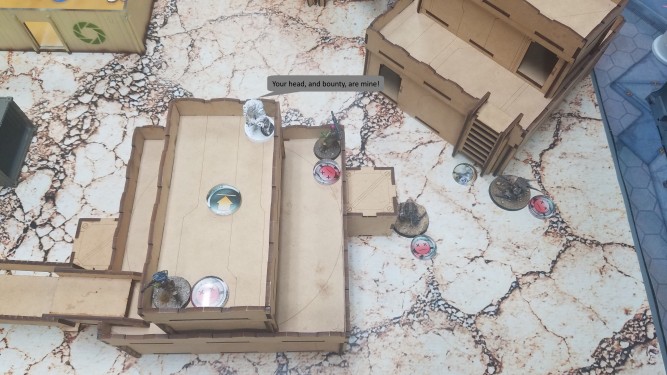 In the end, the Zencha got the bounty!