Fought At The Gallery Maze: The Chimneys
1108 days 9 hours 24 minutes ago

This report outlines the events of Operation [REDACTED]. Elements of of the OSS, under the command of Aspect Thamoz and operating in an outlying section of the Gallery Maze, were to establish a Safe Area from which they could conduct further clandestine operations as deemed appropriate by Aleph.
The intended site of the safe area is thought to have once been a Nomad community that worked to supply certain 'medicinal' plants to other sections of the Gallery Maze. Aware that this area had been abandoned shortly after hostilities began, Aspect Thamoz moved their forces in to sweep the area and consolidate control of key sectors. What follows is the report of Aspect Thamoz, uploaded to Aleph shortly after the failure of the mission. 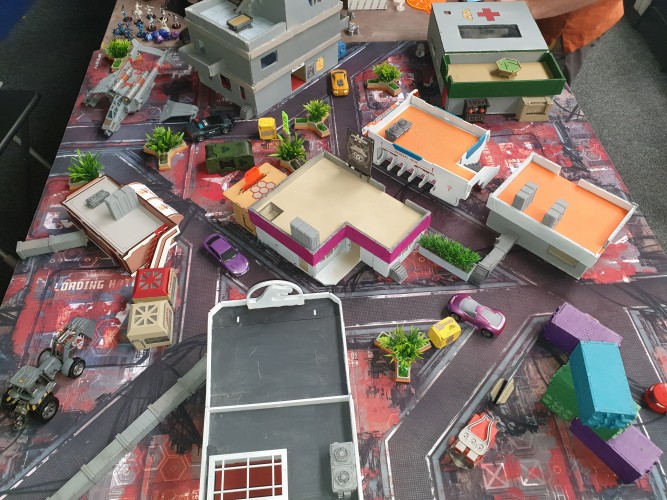 Our forces deployed from the west, noting the presence of antiquated agricultural equipment and the profusion of herbal plants. It seemed out intelligence about the area of operation had been correct. With no enemy forces identified as an active threat to the operation, we moved out to sweep the area and establish control. A linked team of 5 Dakini, supported by Apsara and a posthuman engineer host took up position to the south while a link team of Yadu operatives and a Deva hacking aspect took to the north. 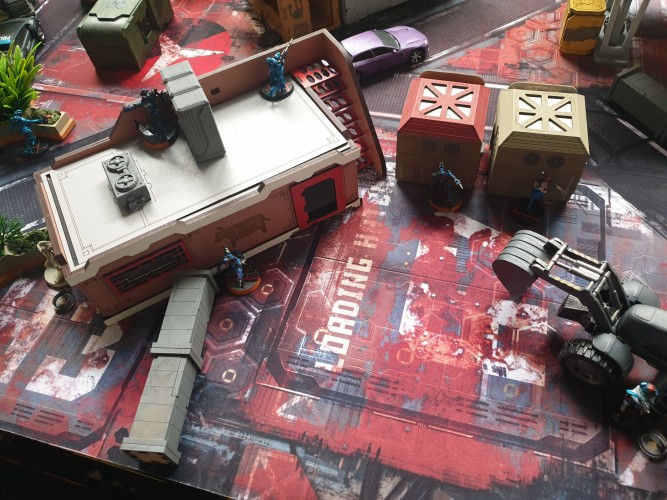 Dakini link team, supported by an Apsara and Proxy mk1 engineer, take up position around a fast food dispensory.

At this point we were alerted by our advance scouts (posthuman hosts in their mk2 sniper and mk5 forward observer forms) that there were opposing forces active in the area. They were identified to be of the Qapu Khalqi and had acquired the services of the notorious mercenary Scarface. Additionally, our scouts identified a total reaction bot advancing in their centre and a Sekban team moving to the north. They also reported suspicions of a Djanbazan lurking on a rooftop and signs of an Azra'il supporting the centre. 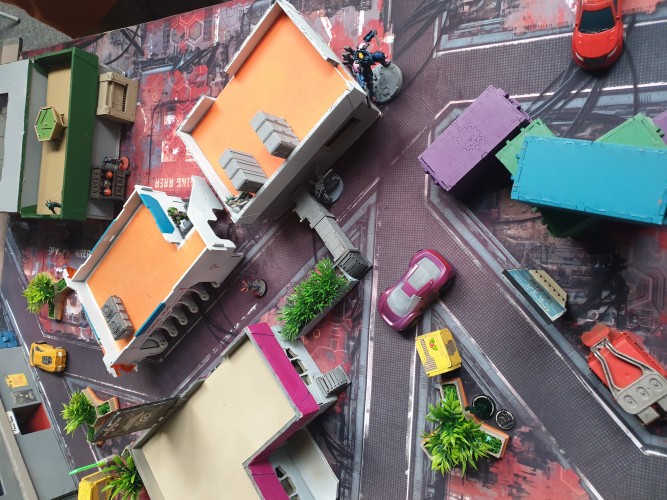 A link team of Sakban occupies positions to the north, their rocket launcher prone behind the raised edge of the rooftop. A sniper and Azra'il hold positions above the street whilst a TR bot holds a firelane along the roadway. To the south Scarface and Cordelia take cover along the side of a building.

Recent experience had taught us that, when dealing with the Qapu Khalqi, it is best to be prepared for raucous space pirates to appear in awkward positions. As our forces moved out to purge the enemy from the area, we made sure to keep our backs covered. "Doors and corners, kid. That's where they get you." Words of advice from an Aspect far older that us. Wise words to remember in battle.
We identified the TR bot and mercenary TAG Scarface as key threats and moved to neutralise them. Sustained fire from our Dakini HMG brought down the mercenary TAG, although the cloud dancer possessing the remote reported she saw the pilot escape from the battlefield.
The Yadu team utilised their heavy rocket launcher to destroy the TR bot, but not without significant damage to the Lhost carrying it.
Though much time had been lost on removing these key threats, we were not able to advance towards our sectors in comparative safety. At least, that is what we thought. 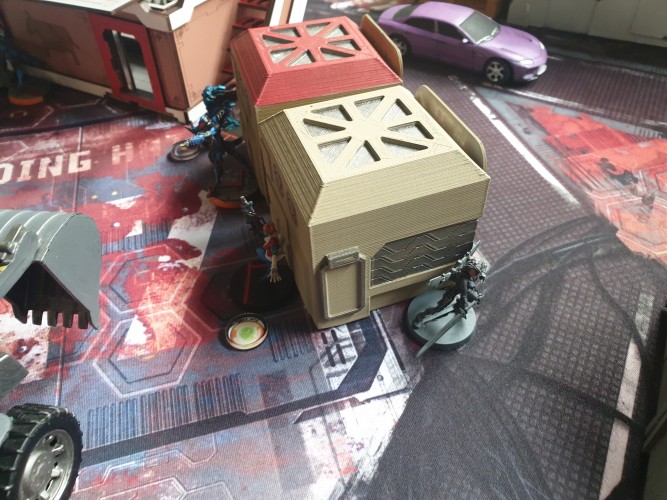 We had only scant warning from our Danavas hacker before we were engaged by Yuan Yuan pirates. One appeared to lose control of their descent and crashed to the ground in front of our own Lhost. Our Deva-bot utilised its flamethrower to dissuade the Yuan Yuan from further piracy. Unfortunately, a second pirate had more profound success, landing to the south and ambushing the Dakini link team. Though the Yuan Yuan did not survive the answering bullets of the Dakini and posthuman engineer host, her chain weapon caused severe damage to two Dakini remotes.
Elsewhere, a trio of Bashi Bazouks arrived to the north, taking up covered positions.
As we recovered from the appearance of these disruptive troops, the Azra'il moved onto the rooftop and destroyed the forward observer host of out posthuman. One of the Sekban team also seized the opening to destroy another Dakini from long range with a heavy rocket launcher.
In order to regain momentum, our Yadu team moved forward to engage the Azra'il, however the Yadu operative, already damaged from battling the TR bot, proved insufficient for the task. 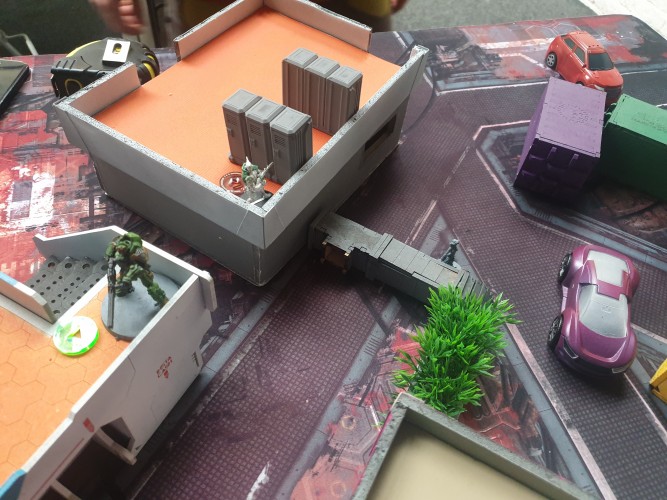 The Azra'il takes up a commanding position and wrecks havoc on our forces. Unrecognised at the time, Cordelia moves forward into a key sector. 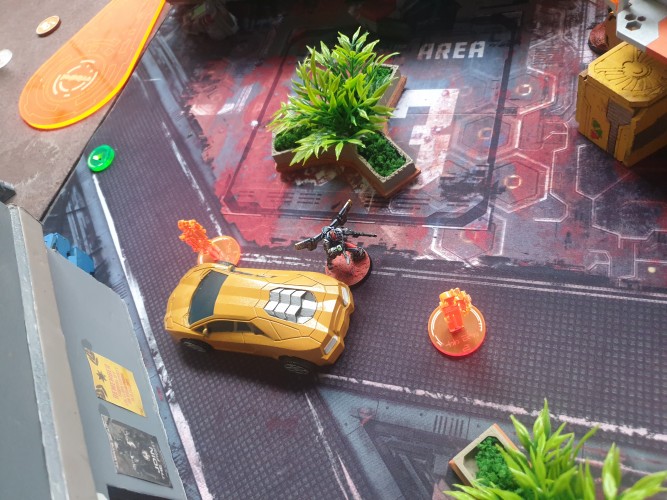 The Bashi Bazouks move to control the path north and prepare for a future strike.

Despite the intelligence that the enemy likely possessed a sniper equipped with an MSV, we ordered the posthuman to utilise its Mk 2 sniper host to engage and destroy the enemy heavy weapons that had us pinned outside our key sectors. Though the host sustained damage from the engagement, luck was with us and the Proxy mk2 was able to neutralise the heavy rocket launcher and the Azra'il.
Our path was not yet clear however, as the Bashi trio were still covering the Yadu's path forward. Utilising the impressive skillset of our posthuman, the engineer host performed combat repairs on the HMG Dakini which moved to the rooftop and removed the Bashi from the equation. It was later found that two of the three Bashi had in fact been holo echoes designed to confuse and distract us. Job accomplished, the Dakini activated suppressive fire routines whilst the Yadu and Deva moved forward to deployed drop bear mines to keep the remaining Sekban and Leila Sharif contained. 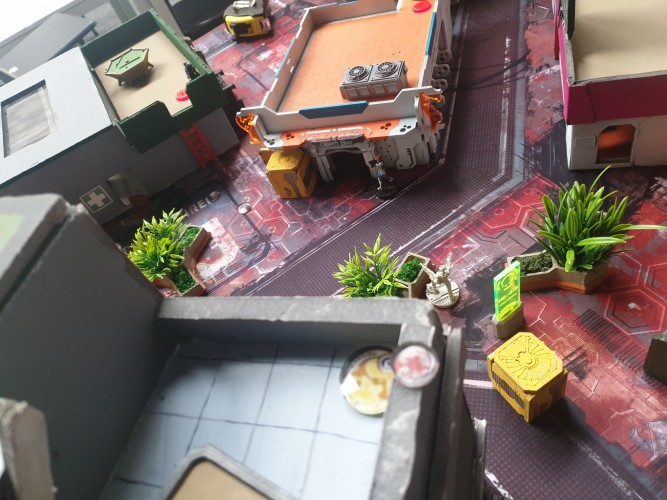 The Proxy mk2 slips back into TO camo whilst the Yadu and Deva move up to take control of the enemy's northern sector.

With the enemy assumed contained and the path to dominating key sectors clear, we prepared to move our forced up and finish the operation. These plans were almost immediately thrown into disarray when the suspected Djanjazan sniper rose from his prone position and began to decimate our forces. The Proxy mk2 host, already damaged from its duel with the Azra'il, was lost as its TO camo proved insufficient protection. Our newly repaired HMG Dakini fell soon after, out-ranged by the canny sniper. Finally the Deva Lhost that had accompanied the Yadu was damaged beyond repair by the sniper's shock ammunition. During this carnage, a camouflaged enemy trooper moved into our southern sector.
We refocused our attention on the Yadu, and using the drop bears and multi-rifle the enemy Sekban and Leila were soon dispatched. Our forces moved up to ensure control of our two Sectors and the engineer proxy host dueled with the camouflaged trooper, eventually dispatching it with the support of our remaining Dakini tacbots.
Confident of victory, our forces seemingly dominating 3 out of 4 sectors, it seems our pride got the better of us. The Yadu operative had failed to account for the actions of the enemy lieutenant - a heretofore unnoticed Ghulam infantryman. We cannot help but admire the bravery of this under-equiped line trooper who ran from his safe hideaway to confront the our Yadu - for despite suffering wounds from a chain colt whilst clearing out the Sekban, a Yadu is a highly trained and well armed operative. Pride goes before the fall, and the Lhost of the Yadu fell before the Ghulam.
With our operational window expired and control of the enemy northern sector now lost it seemed as though our enemy had battled us to a stalemate. Here our pride came back to bite us again. Cordelia, the sister of Joe Scarface, had not fled the battle when her brother fell. She had sneaked through the warzone to secure a console in the enemy's southern sector and tip control of the entire area of operation into the hands of the Qapu Khalqi.
Our forces in ruin and our objectives denied to us, we ordered the surviving Lhosts and remotes back from the fight.
Report compiled by Aspect Thamoz, possessor of Deva Lhost (surviving), on the 2nd day of operations.
Aspect status: Reintegrated into Aleph. 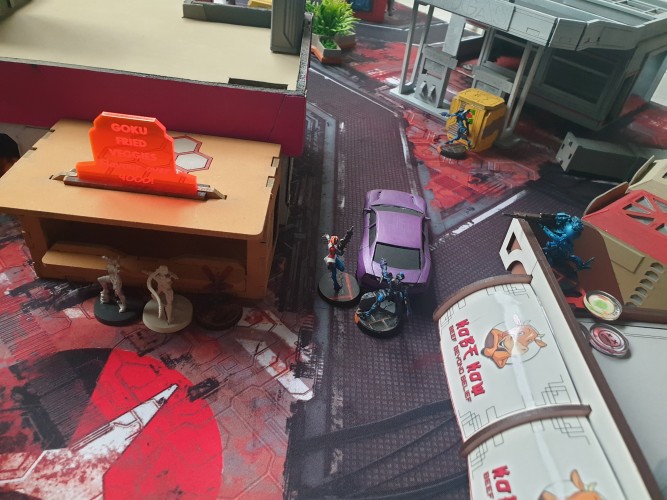 OSS forces secure two of the Sectors after clearing out a camouflaged enemy trooper. 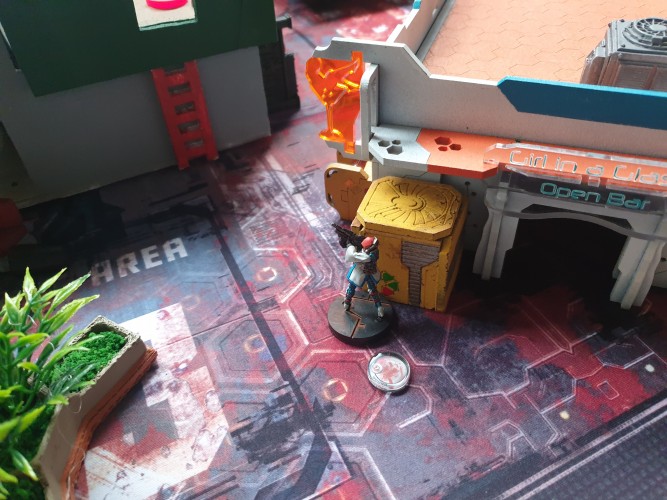 Yadu operative, damaged from engaging the Sekban team, just prior to its destruction by an enemy Ghulam. 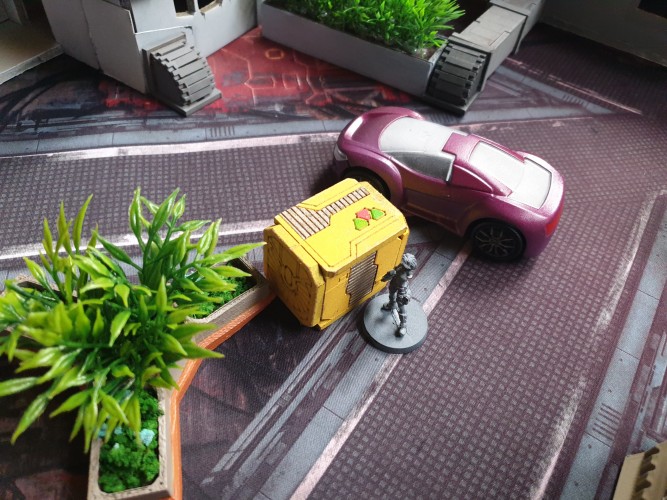 Cordelia securing victory for the enemy by controlling a console in the enemy's southern sector.

This report highlights the dangers of underestimating even the weakest of enemies. Aspect Thamoz made many errors in its engagement of the enemy, errors we hope will not arise again should the Aspect be called upon to command further forces. This failure has set Operation [REDACTED] back before it has even begun. Operations to establish a base within the Gallery Maze will continue, but our timetable must be accelerated. Additionally, it is unknown why operatives of the Sultanate should be found active within a nominally Nomad aligned area. Links between these two forces must be investigated as a matter of urgency if Operation [REDACTED] is to have any chance of success.
Final note: An image taken by rogue civilian elements of a Dakini attempting to order food mid-battle is to be suppressed - we cannot have questions of AI sentience in combat remotes surfacing at this juncture. 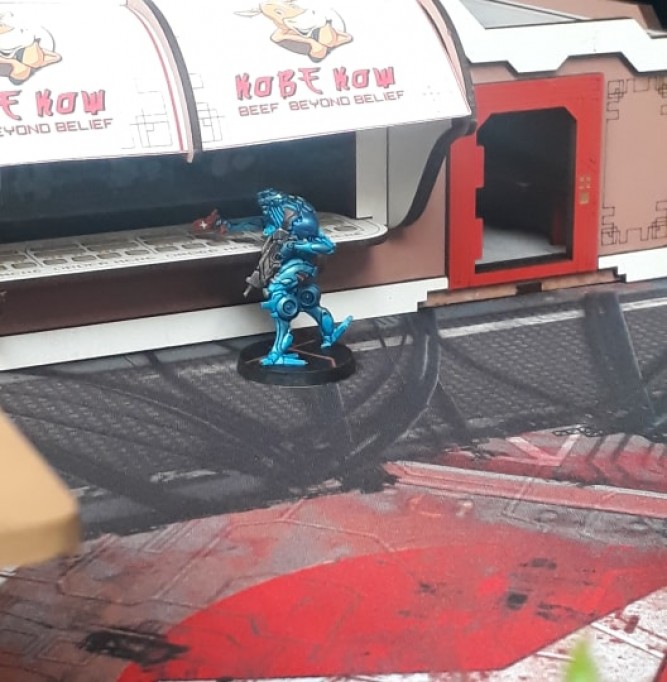