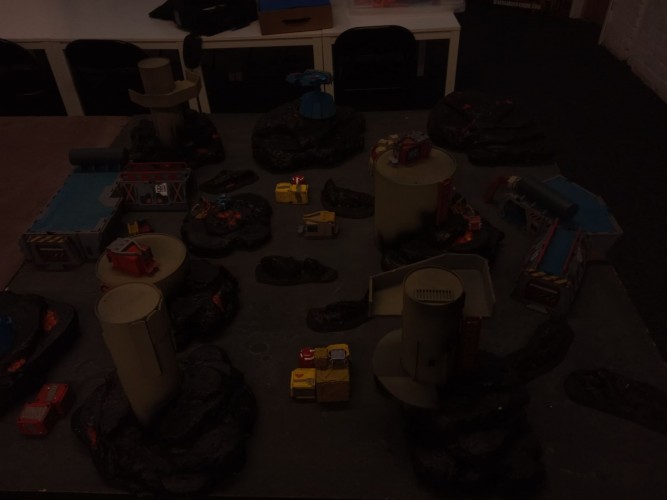 Darkness gathers, cloaking the Batteries in a false peace soon to be shattered.

Their forces struck at twilight, the gathering dark lending an otherworldly quality to the combat Lhosts of Aleph. Apt, perhaps, for an artificial being with no true form. Battle remotes stalked the spaces between hulking rocks and towering metal spires, their strangely silent forms paying me no attention as I joined their company. If they had minded my presence, I doubt I would have been allowed to witness them.
I am no stranger to the clandestine battles fought on the fringes of humanity, but I had never seen the OSS take to the field. The secretive agents of Aleph's operations subsection prefer to remain in the shadows. This command Aspect was different. I sensed that it wanted an audience.
The first sign of trouble was not the report of weapons fire or the screams of the wounded, but a sudden and unnerving change in my unliving company. Two of the combat Lhosts vanished ahead of us, one fading into the darkness while the other seemed to become darkness itself. The remotes speared off with an Aleph functionary, their guns at the ready, moving from cover to cover with frightening speed. Beside me, a large and squat remote revealed a heavy machine gun and crawled forward - its sensors blisters probing the false night in all directions. I decided the open ground was no place to be and scrambled up a nearby tower, aerocam circling to capture as much of this strange operation as I could. Safety, I thought, lay in being out of sight. Little did I know how wrong I was. 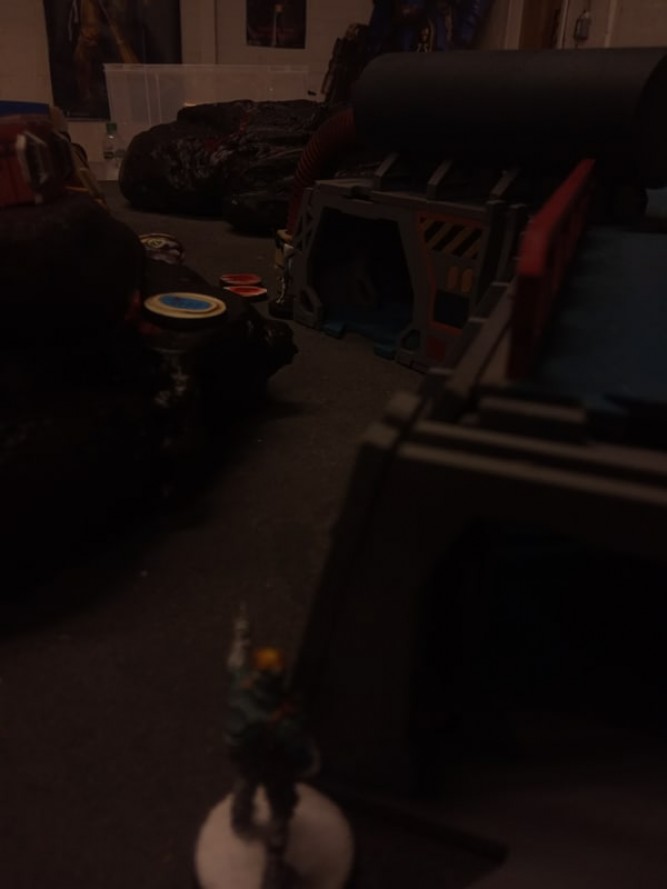 An Aleph command aspect falls as the Druze brings a network of killer hackers against her.

The only warning that battle was joined was the harsh reports of rifle fire. I did not realise it at the time, but a Garuda remote had spooked a team of Druze mercenaries who had made short work of it in return. The Druze, it would turn out, were in the pay of the Sultanate! Perhaps underestimating this ruthless foe, the command aspect moved to pin them down behind a building while more specialist troopers took positions overlooking the consoles and tech coffin that were evidently the focus of Aleph's attention. It seems AIs are not immune to hubris, for soon the net was flooded with programs aimed at the command aspect. It fell to the ground, brain scrambled, yet the loss of their commander did not phase the inhuman force. As the Druze charged out from the building the air shimmered beside me and a posthuman form leveled its sniper rifle. Shots rang out, scant inches from my side as this terrible, efficient machine dispatched a Druze mercenary. 2 more fell to a combat remote as they tried to exit the building. Slaughter without compassion. It is moments like this that makes you wonder if the Nomads might have a point. 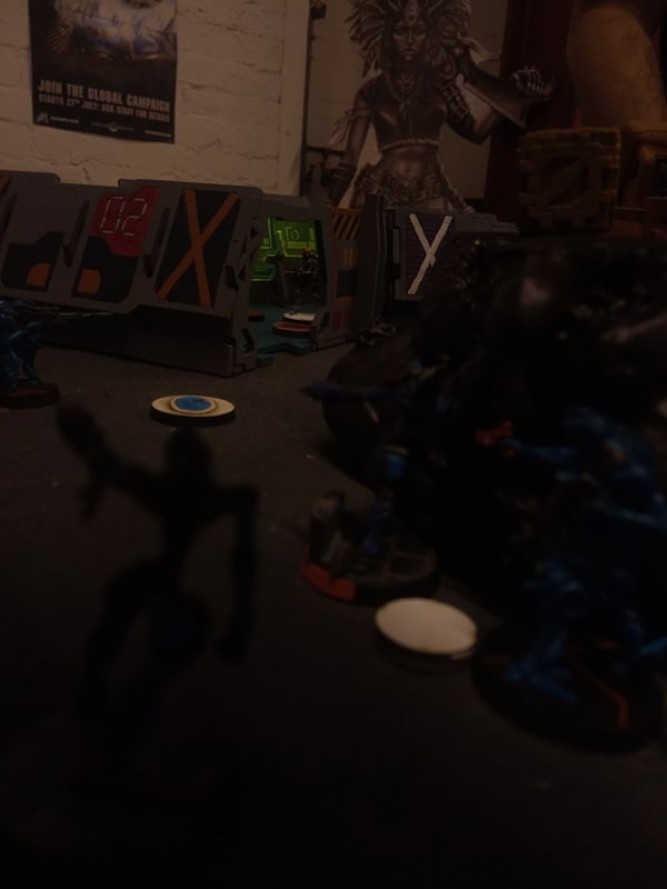 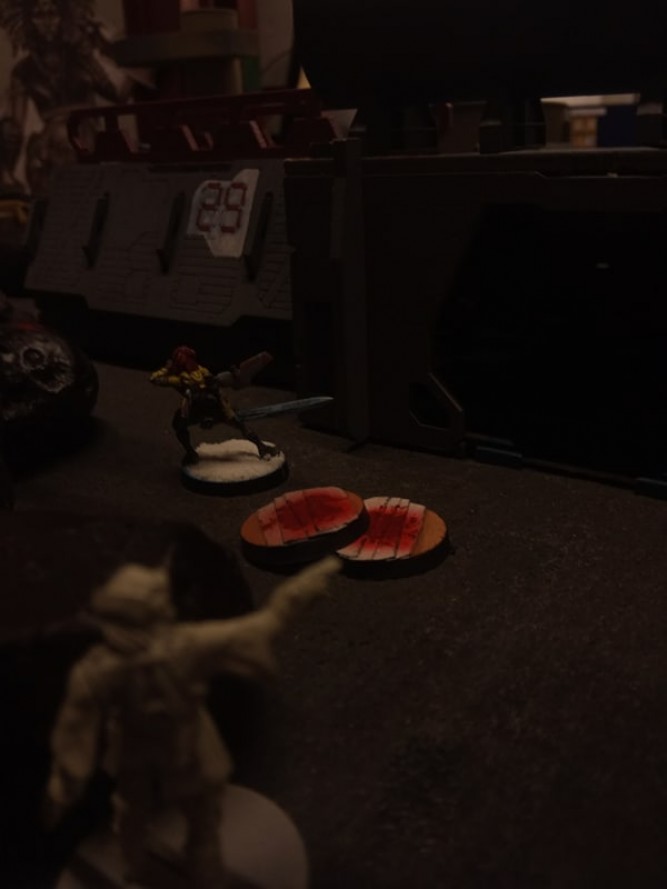 The Druze mercenaries had been routed, yet peace was yet far away. With a chaotic clatter, Yuan Yuan space pirates descended upon us. Their noisome cacophony erupted like a firework and just as soon faded away, put down by the shotguns and spitfire of Aleph's Aspects. I must admit a chill went down my spine as these remorseless killers executed this new foe with cold and calculated indifference. Aleph might be our guardian and servant, holding back the combined army on Paradiso and empowering humanity's dreams, but I challenge anyone to witness the OSS and tell me this power truly belongs to humanity. 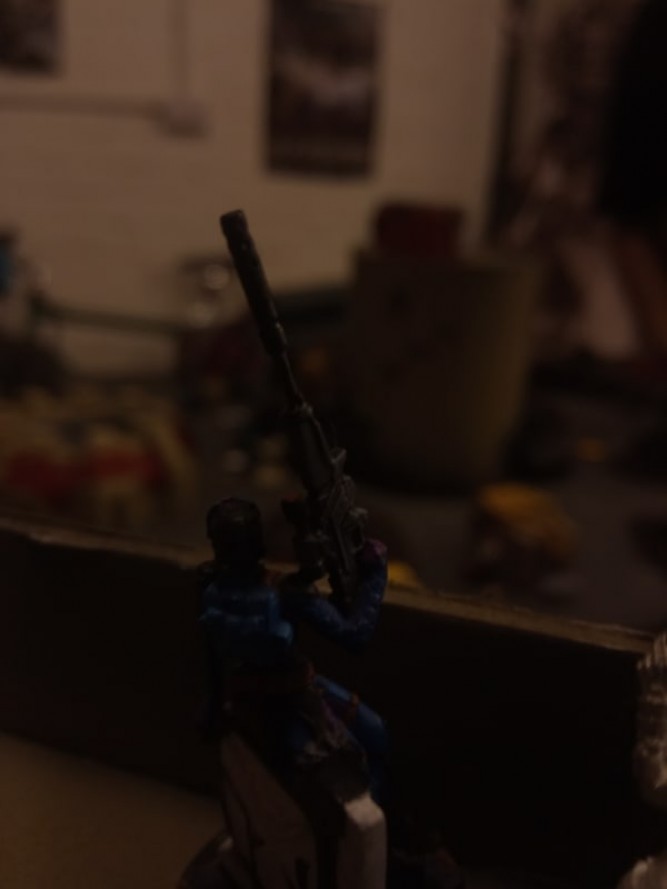 Beyond human and beyond caring, the posthuman sniper relaxes after killing a Druze mercenary. 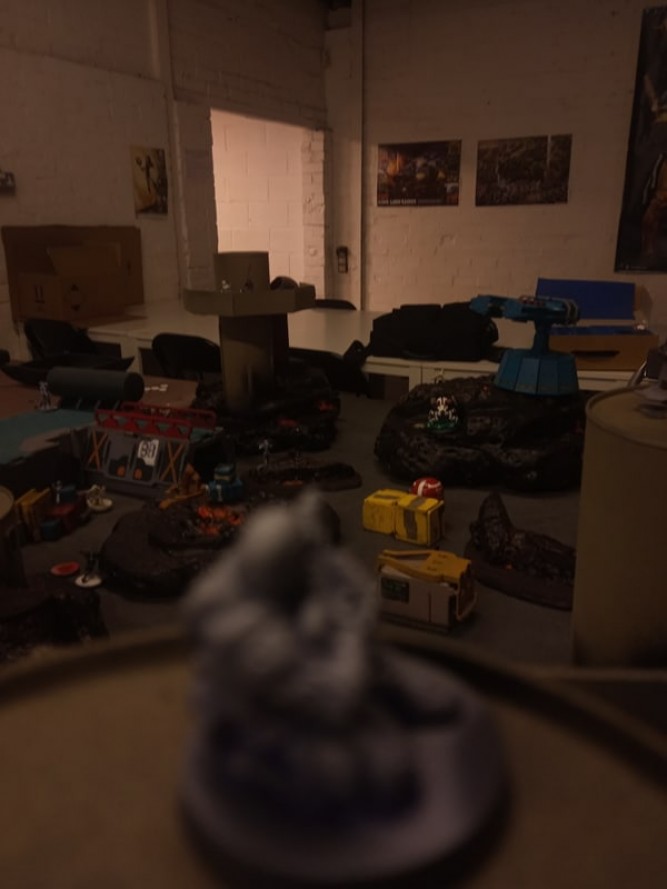 Human marksmanship triumphs against Posthuman grace as two snipers duel across the field of battle. 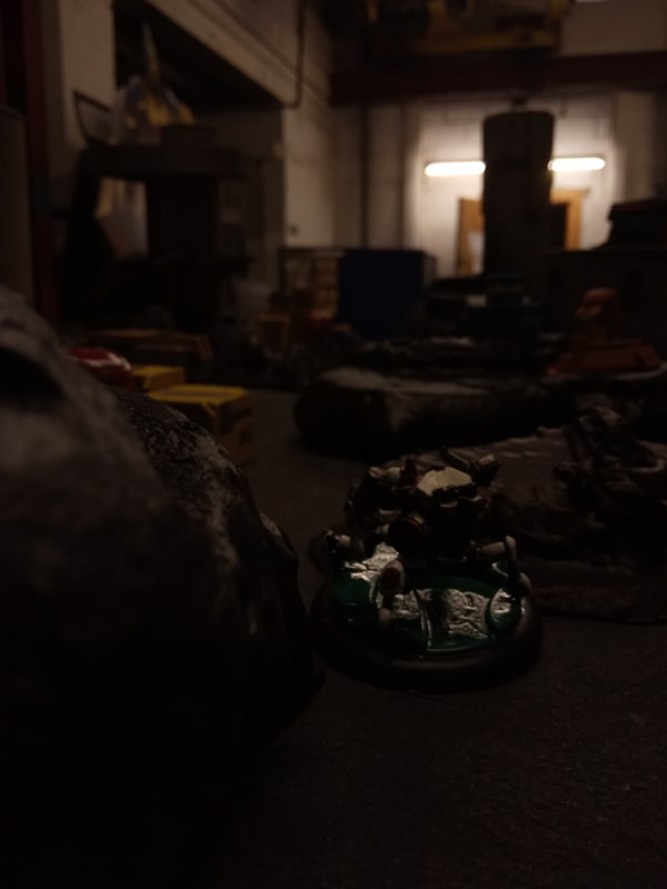 The hulking combat remote stalks forwards to command the field, its heavy machine gun covering the objectives of the OSS.

Despite their autonomic efficiency, the fury of the battle was not kept at a safely removed distance. In a display of truly inspired shooting, a Qapu Khalqi sniper engaged the posthuman form beside me and slew the creation with a single shot. His victory was to be short lived, however, as the large combat remote below us swiveled its heavy machinegun towards the poor human and tore it apart in a blistering hurricane of bullets.

A more perfect piece of Nomad propaganda could scarcely be dreamed of, humans falling in sprays of blood and viscera while Aleph's remotes calmly bestride the field. Claiming and holding their objectives with no more care to their own losses than to those they inflict upon their foe. When at last the firing ceased, only a half handful of humans remained alive, fleeing the carnage behind them and leaving their brothers and sisters to the tender mercies of unfeeling logic.

I left them then, the "blood" of a posthuman spattering my left side and a weariness aching inside me. Aleph states their mission as a simple acquisition. A spokesmen for the Sultanate has declared it murder motivated by revenge. I have seen war. I have seen slaughter. I have seen the hopeless and the valorous, the casualties and the collateral. Most every death is a tragedy given to a cause that feeds on blood; be it the freedom of a planet or the fattening of a profit margin. What fate awaits us then, when the deathless go to war?

Aspect Thamoz continues to display aggressive and careless actions in the field, resulting in higher than necessary casualties on all sides. Reckless wasting of resources and lives will not reflect well on Aleph or the O-12. In this case it caused the operational loss of Aspect Thamoz, whose Lhost was destroyed by cyberwarfare. Had not command fallen to us, it is possible that the mission would have been a failure akin to Aspect Thamoz's last command. It is our recommendation that Aspect Thamoz be removed from Operation [REDACTED] and permanently reintegrated into Aleph. Failing that, we strongly suggest uploading Aspect Thamoz into a durable battle Lhost and ensuring their missions are subject to Shukra oversight.
Addendum ends.