Another battle against the Unidrons 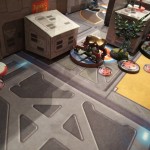 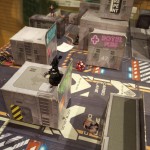 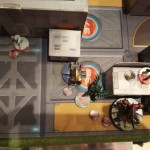 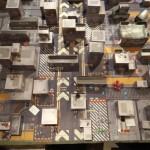 Another slaughterfest for McPoPson. Mission was Supplies and my Classified Objectives were Telemetry and Predator while my Opps were Extreme Prejudice and Rescue.
Game started off with a Fraacta Infiltrating near my Deployment Zone and taking out Transductor, Salyut and worst of all - Zondnautica. Her next target was an Alguacil which happened to be my Lt, but luckily she was taken out by an Intruder with his HMG on approach to the ladder.
Unidron link moved next. They got rid of a Moran and KHD Zero on the way to my DZ and once in they took out the Intruder and bunkered up near my DZ, with Nexus forgetting about a Koala and facetanking her to death.
I didn't have much to do. HMG Hellcat dropped behind Unidrons and put PSR one into Dogged. I was determined to push him forward but, in the next Order she knocked him out.
Next in line was Spec Ops. Alguacil pushed forward and took out another Unidron.
Onyx took initiative back by pushing TR drone towards the middle objective, taking out Spec Ops.
On my turn I decided to rush lefthand box to take it out. TR let my Camo through and Zero took out a nearby Ikadron from out of its Flamethrower range. Took out a box and went back a bit.
TR Drone shot down the Zero, went up on a ladder near Moran and tried to kill him, but got knocked out by a crit. Then Rodok tried his luck. Jumped up on the building and in a second Order took out the Moran.
Rodok jumped down on Zero, took the box and jumped back up and laid down into safety of Prone.
With my last breath I decided that I could have a chance of taking the box back. Onyx already had 3 boxes, but I could deny them one for some points. My lt Alguacil rushed towards the Rodok but in second to last order didn't kill the Rodok and in last Lt Order he actually got knocked Unconscious by the Rodok, which resulted in crushing Victory of the Onyx.

1 Person Has Recommended Tcional For a Commendation