Another day on patrol

What is wronf with our allies? Now a group of nomads came to our door, they sent 3 delegates to meet with a delegation of our own but the negotiations were not as we expected so after the report by a Daylami infiltrator we dispatched our operatives to deal with them.

The 6 delegates were starting their retreat when the teams arrived, we deployed a fire team of Govads in the middle to give some covering fire while a team of 2 Muyibs and an Asawira started their advance on the right side and a team of 3 Ghulams advanced on the left.

The Govad with the missile launcher started a duel against the Krisa Borac and the Holow man, but with the support of his fireteam the Govad managed to pin them down. On the right side the Asawira advanced under the fire of a Grezner sniper, but the Asawira team managed to get to a position where they could start firing smoke to cover the advance, unluckyly it wasn’t before the Grezner managed to put a bullet on the Muyib carrying the grenade launcher. Fortunatly the other Muyib was a medic who was able to bring him back so he could place the smoke on 2 key positions so the same madic was able to advance and accomplish one of the missions with the HVT disguised as a mobile brigade.

The Fiday who had advanced to where the Krisa Borac was under the disguise of a Securitate, got discovered and charged by a Spektr, the poor thing did’t know his mistake until it was too late and the Fiday made short work of him.

On the left side of the battlefield the Ayyar and the Daylami came out of their respective disguises to keep the Grezner and his team at bay.

At the end we accomplished 4 objectives and denied all of them to the Nomads. For Allah 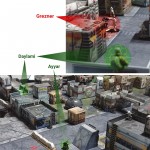 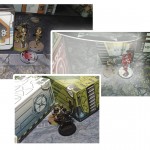 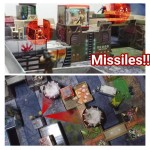 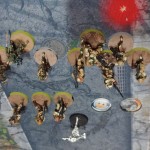