300 POINTS
Haqqislam Sword of the Prophet VS NA-2 miguel

My parents named me Zara.

‘Radiant’ is what it means. Radiant like the sun, my mother would say.

But the sun was not my passion.

My passion was the flame.

I have always loved fire. As a child, I would stare at a candle’s flame and watch it dance for hours. Its dance was hypnotic and it was reassuring.

When I was older I’d travel out to the desert and burn bonfires at night. I basked in the glow and the warmth as it kissed my cheeks.

When I was old enough, was only natural for me to join the Ghulam Infantry. I was average in every way among the Ghulam but my passion for the flame made me an obvious choice to be transferred to the Naffatun Regiment.

I wasn’t afraid of fire. I didn’t mind the heavy gear, the protective layers of flame-resistant armor, the stuffy helmet or the tank of concentrated Napht strapped to my back.

I felt in control. Spraying Napht and igniting it was magic. The fire obeyed me. It did my bidding.

My superiors were impressed and I was selected for important missions.

My last mission was to seize control of an armory. My brothers and sisters stormed the building but they were slowly pushed back by the enemy.

“Stay back, Zara! It is too dangerous,” the Khawarij shouted. “You can blow up the entire armory with us in it! Let’s withdraw and wait for reinforcements.”

Maybe, I thought. As we withdrew, I moved closer. As our forces left, I remained.

I was not going to leave without leaving a warm reminder of who got here first.

I steered clear of the munitions and explosives. I took my flamethrower and aimed at the weapons and the gear.

I burned it all. I stood fearless as the enemy shot at me. I watched the metal melt and the equipment burn. It would be useless for them.

The enemy who was foolish enough to get too close screamed as the felt the burning wrath of the blaze.

When I was satisfied, I took my grenade belt, activated a delayed fuse and threw it to the munition depot.

The munitions exploded in a loud and fiery blast.

The enemy would win the position but they would have nothing to show for it.

I watched the building burn from afar and watched the efforts of the enemy to contain the raging fire. My facemask was up and I could feel the warmth on my face even at the long distance.

The Khawarij put a hand on my shoulder.

My face was full of grease and soot, but I had no doubt it was radiant. 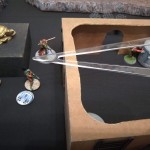 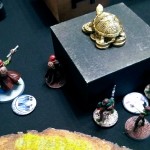 1 Person Has Recommended Sword of the Prophet For a Commendation