When it comes to Silk and anything that can possibly affect the Silk trade, the Funduq Sultanate spares no expense. They pay and they pay well for the services they require.

As part of the Mobile Brigada, I was contracted to serve as Hacker for a Qapu Khalqi mission. The Al Hawa hacker they had assigned to the unit was more stealth than muscle.

I am a small woman. But a scrappy one. My red armor stood out among the green, the gray and the browns of the Haqqislamites. I was meant to take a beating.

The mission was to eliminate an enemy unit. Simple and straightforward. We weren’t sure who they were. Some independent merc unit. It was supposed to be easy.

It went south quickly. Djabazan, Odalisques and other tough Qapu Khalqi soldiers were taken out. They should have put up a better fight but they did not.

The exception was the Azrail. He was impressive. He was big, strong and heavily armored. His Feurbach sounded out all over the field as he hit the enemy positions hard.

I saw him blow a hole the size of a helmet into the center of an Orc’s armored mass. It seemed for a moment that the tide would shift in our favor.

The Azrail must have gotten cocky in his desire to attack the enemy position. He started getting closer and closer to where they were holed up and then in a blink of an eye his big helmeted head was separated from his shoulders.

It rolled to the ground and empty eyes stared back at me. The squad leader, a Janissary named Mustafa raced to his man in shock that he had been taken so suddenlt. As he turned from his fallen comrade a figure in red plunged his sword into his heart through his armor.

I froze as I saw who it was.

He looked at me. But I did not move to shoot him, nor did he move yet.

He paused then pulled the sword free. The Janisary fell to the ground in a dead armored heap.

My combi rifle was on him and my finger was on the trigger. I did not fire.

“Hola, chica,” he said with a calm and even tone. “Are you feeling lucky?”

Twenty paces separated us. I’d seem him a hundred times in the Hexadome. Could I drop him before he’d get to me?

I decided I could not.

“Not today,” I muttered tossing the combi rifle to the ground.

“Smart girl,” a man’s voice said from behind. “I had an armor-piercing round with your name on it set on the back of your head.”

The man who spoke pulled my sidearm out of my holster and tucked it into his belt. He kicked the combi rifle away and walked in front of me to face me.

It was Hannibal. He’d had his sight on me the entire time. He pulled off my helmet and took a good look at me.

He looked older than I remember. His weathered face had seen his share of battle in and out of the Hexadome.

“What’s your name?” he asked as he lit a cigar.

“I figure you know who we are,” he stated.

“Foreign company,” I confirmed. “I’m a huge Aristeia fan. I’ve seen you two live at the Hexadome. The corregidor arena. Had I known you’d be here I’d have declined the mission.”

Hannibal shrugged as he took a puff of smoke.

“Sometimes a mission needs a special touch. Can’t leave all the work to the grunts. Anyway, it’s a job and it pays the bills.”

“What’s a self-respecting Nomad doing with these locos? Massacre asked.

“How’s the pay with the Sultanate?” Hannibal asked.

“It pays the bills,” I retorted.

“I like you,” he said. “You know when you’re outclassed but you hold yourself with dignity. I really like that. You could have potential.”

He blew smoke to the side careful to avoid sending the smoke my way.

“You’ll let me go?” I suggested with a weak smile.

“I’d like to, young lady, but I can’t afford to let word get out that Hannibal and his crew are getting soft. Right, M?”

“Así es,” Señor Massacre answered. “It takes a decade to build a decent reputation for mayhem and murder and just second to ruin it. They don’t call me Massacre for nuthin’, chica.”

“You’ll make it quick?” I asked resigned to my fate.

Massacre nodded and Hannibal patted me on the shoulder before turning away.

“Thanks,” I said swallowing hard.

“Surprise me,” I said astonished at my calm composure.

He nodded. He twirled the sword around expertly and as I expected the death blow to fall, he sheathed the sword, pulled his pistol free and pointed it expertly at my head.

Those were the last I recall before all went black.

I awoke in a hospital bed.

I felt a splitting headache. I pulled the sheets off and saw I was in a hospital gown. I checked to make sure I was whole. Two arms, two legs, all toes and fingers, no major wounds on my body. I was happy to see that save the head bandages I was in one piece.

A young Ghulam doctor walked in and smiled.

She was studying a digital chart at the foot of my bed.

“Tania Tapia,” she said reading the chart. “I am glad to see you’re finally coming around.”

“You’ve been out cold for two days. You had a head wound. The rest of your unit was massacred. You are the only survivor. It was touch and go a little while but you pulled out. Despite being a headshot, the damage is almost nil. You might not even have a scar once it heals. It’s a one in a million shot. You are a very lucky woman.”

“When can I be cleared to return to service?” I asked.

The doctor did not approve, but it was not an unusual reaction coming from Qapu Khalqi units.

“I’ll keep you tonight for observation. Then you will be assigned to a new unit as soon as I’m convinced you can walk on your own and you can take aim. That sound good?”

They kept me a couple of days to do tests. No one could understand how I walked away from such a wound with almost no consequences. But I could walk and I could aim that that was enough.

I returned to a small cabin reserved for me so I could gather my gear and prepare for the next assignment. My equipment was there. All intact and operating well. I found a holo-card attached to my hacking unit and I eyed it suspiciously.

I scanned it several times and found it was a simple holograph. No virus.

I opened it up an was surprised to see it was an Aristeia poster of Hannibal signed by the man with a plan himself.

I’m your biggest fan. Call us when you grow up.

It didn’t take much to realize that Tania Tapia, the Mobile Brigada Hacker assigned to Qapu Khalqi died on that battlefield that night.

Tania had been reborn and the Foreign Company called.

I would not resist her call. 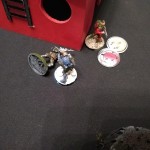 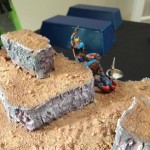 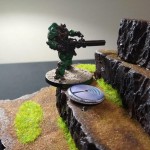 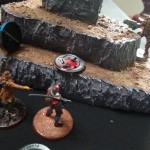 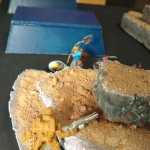 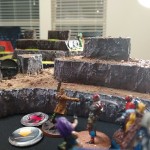 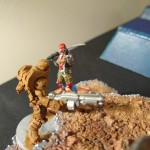 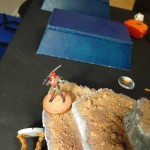 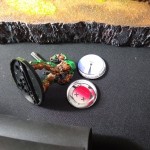 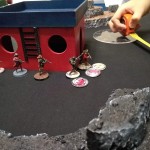 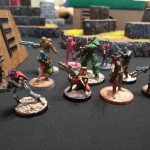 7 People Recommended Sword of the Prophet for commendation