Since noone wanted to play Comms Center against Nomads, we went for a game of Unmasking, so a small group of Nomads tried to unmask an Infiltration of filthy Aleph Puppets while patrolling the Cosmika HQ.

The filthy Aleph Infiltrators won the Lieutenant Roll-off and chose Deployment. Nomads chose second turn because of tactical reasons.
Datatracker were Hector and the Hollow Man. 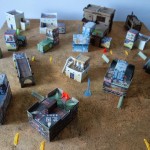 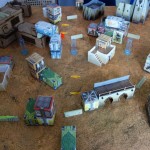 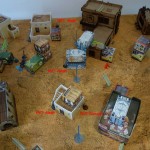 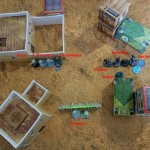 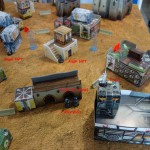 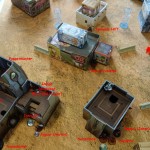 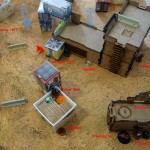 First Knauf, who obviously is working for anyone, no matter what, went for the Sineater, but after two shootouts, he dropped dead. 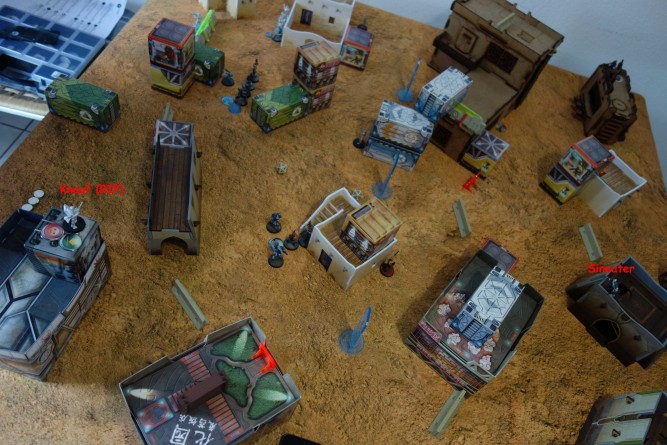 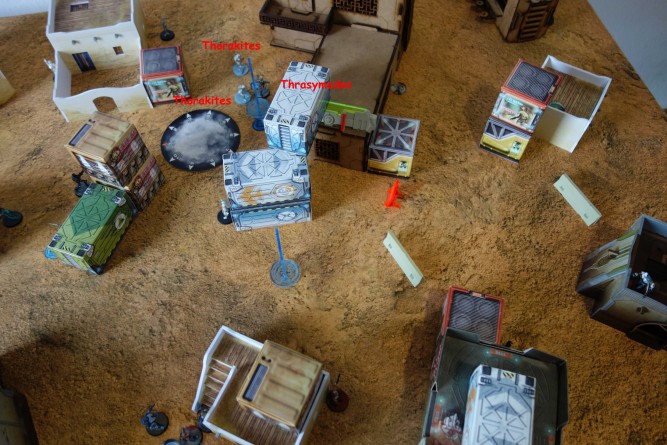 Next Phoenix went for the Sineater and took 1 wound, going NWI. On his second try the Sineater died, but he did his job. He took 4 orders and 1 model, well done. 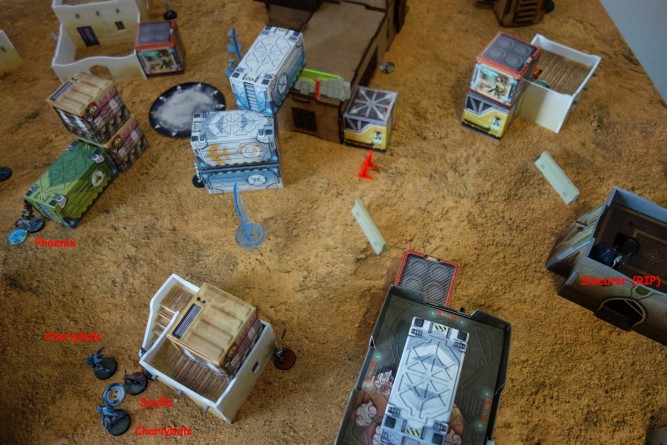 Next Scylla went forward and deployed her bots, and used Impersonation. 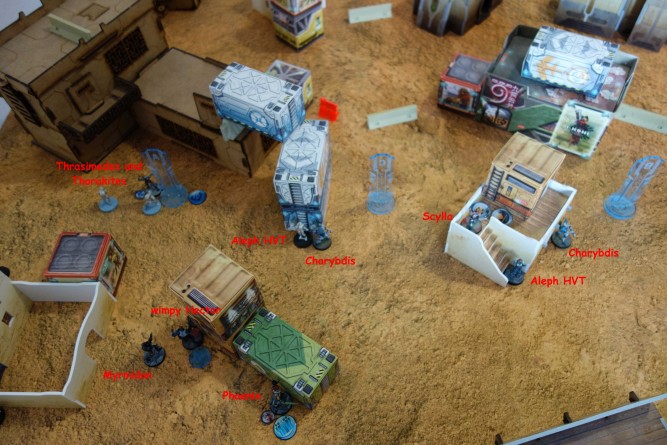 A Command Token was used to switch the Puppetmaster to Group 1
Jaguar Harley threw smoke and the Intruder went for Hector, but he saved 3 hits and cowardly ran for cover. One of the Myrmidons was dropped by the Intruder. 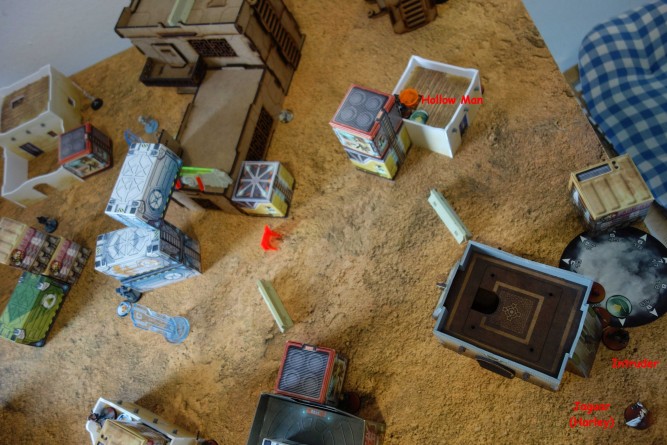 Intruder in smoke an Hector nowhere to be seen

The Puppetbots went forward to get rid of Thrasimedes and Posse (Thorakites). The firt Puppetbot failed and died (bad rolls) but the second one succeeded and even survived the counter attack. 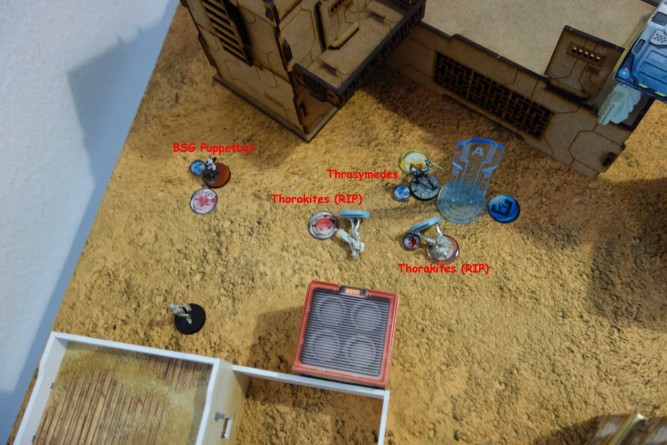 The work of the Puppetbot

Next Mary climbed on top of her cover, using Climbing Plus and shot her two repeaters to pin Scylla and her bots in place. 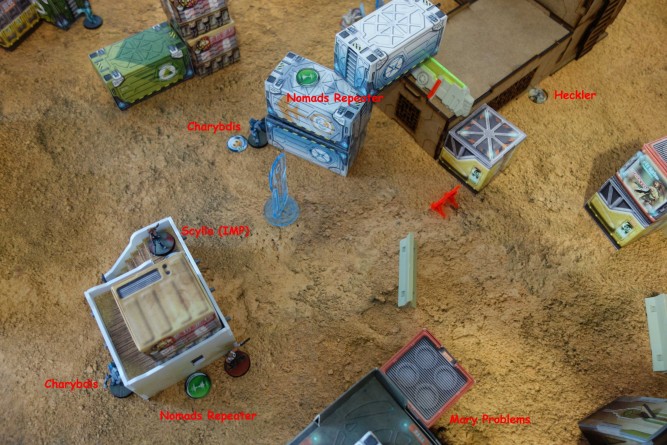 Mary and her deployed repeaters 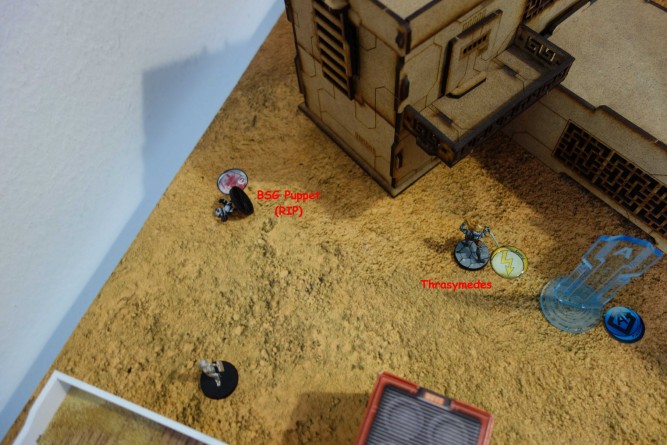 Scylla tried to get rid of the repeater with her bots, so Mary isolated the first Bot. Next Scylla won the hacking fight against Mary, but Mary saved two hits. Unfortunately the Heckler failed his free hacking attempt against Scylla.
Next Phoenix shot Jaguar Joker, who survived, but killed the Zondbot and the Securitate in the blast. 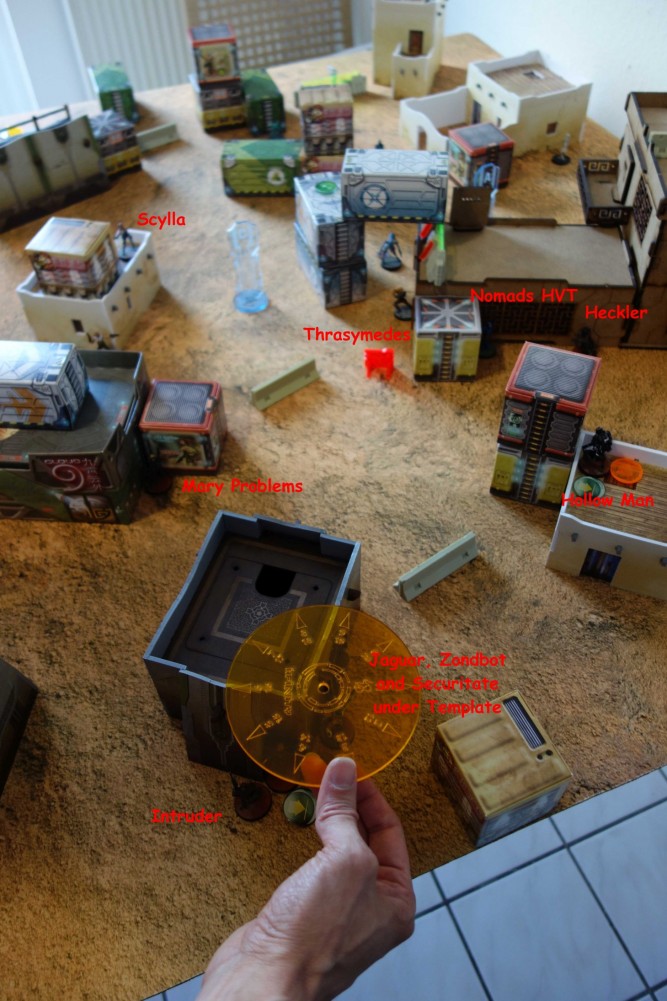 Template with Jaguar, Zondbot and Securitate under it

Now Thrasymedes went for the HVT. First salvo was used to only shot the Heckler, who used his Assault Pistol (because he could), won and survived. With the second and the following last order Thrasimedes split the burst. 1 shot at the Heckler, 2 shots at the HVT. Heckler won again, using his Assault Pistol and dropped Thrasimedes while the HVT dodged. Most likely Aleph lost the game with these two orders, because if Thrasymedes would have thrown everything he had at the HVT he would have killed it, most likely. 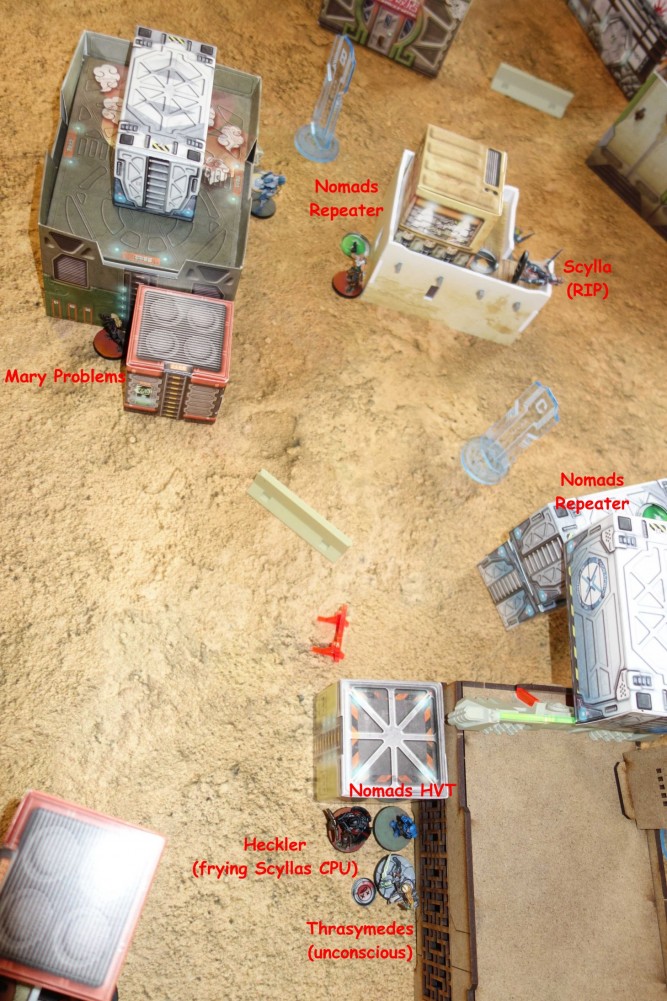 Picture from a later time, but the unconscious Thrasimedes can be seen.

Nomads now were in Loss of Lieutenant, with only one regular order (command token)
Mary went for Scylla, but failed to kill her.
The Intruder went for Hector again, but Hector again saved all 3 hits. And again the coward ran for cover. What a chicken.
Now the Heckler went in front of the HVT. Here Aleph forgot the AROs (cause the Heckler waited some time and heckled it's way through), so the Heckler took a free hack against Scylla (Reset was granted) - and Scylla died. So the Heckler could be called MVP of the game.

Now everyone else went into defensive position.
The Hollow Man, the most expensive cheerleader of the game, on the roof, the Interventor went down from roof. Intruder went in Line of Sight. The Transductor went in range to protect against Hectors approach. The SpecOp went down from the building to be ready for turn 3.
New Lieutenant - Puppetmaster 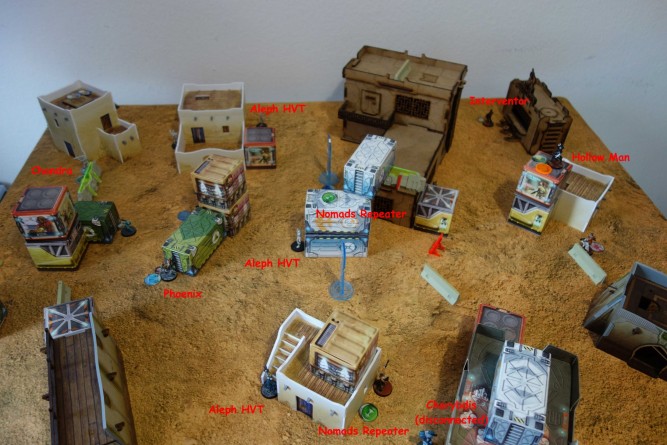 Everyone ready for the last turn

With only 5 orders left, the Infiltrators chose a defensive appoach. Aleph used 3 Orders to heal the Myrmidon so he could form a new Harris. The Harris took a defensive position, shot Jaguar Joker, who went unconscious (Dogged of no use).
The Druze shot a repeater in range of the Objective and Hector formed a new Fireteam. 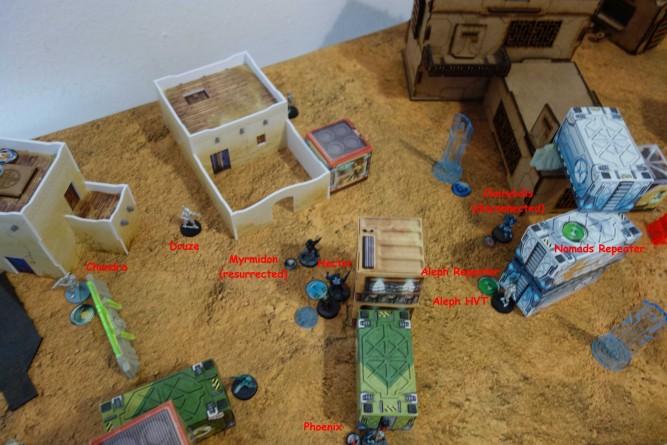 The SpecOp now was the only non-hacker specialist, so Jaguar Harley tried to throw Smoke around the middle objective. She fumbled two times, but succeeded with her last order and dropped a perfect smoke grenade.
The SepcOp went forward to save the day, took first objective (the left one), chose the nearest HVT, which was wrong, but now it was able to be killed.
Without anything else this was already a Draw. So the SpecOp went for the second objective and meanwhile tried to shoot the HVT. But the HVT passed the armor saves. So the SpecOp went for the second objective (the one in the middle) and took it. Indeed the Specop saved the day.

With one order and one lieutenant order left, the AP Marksman Rifle Puppetbot went for chicken Hector. First order, Hector saved two hits and with the second and last order the Puppetbot scored again three hits against Hector who finally took one wound and now knows, not to mess with the Puppetbots. 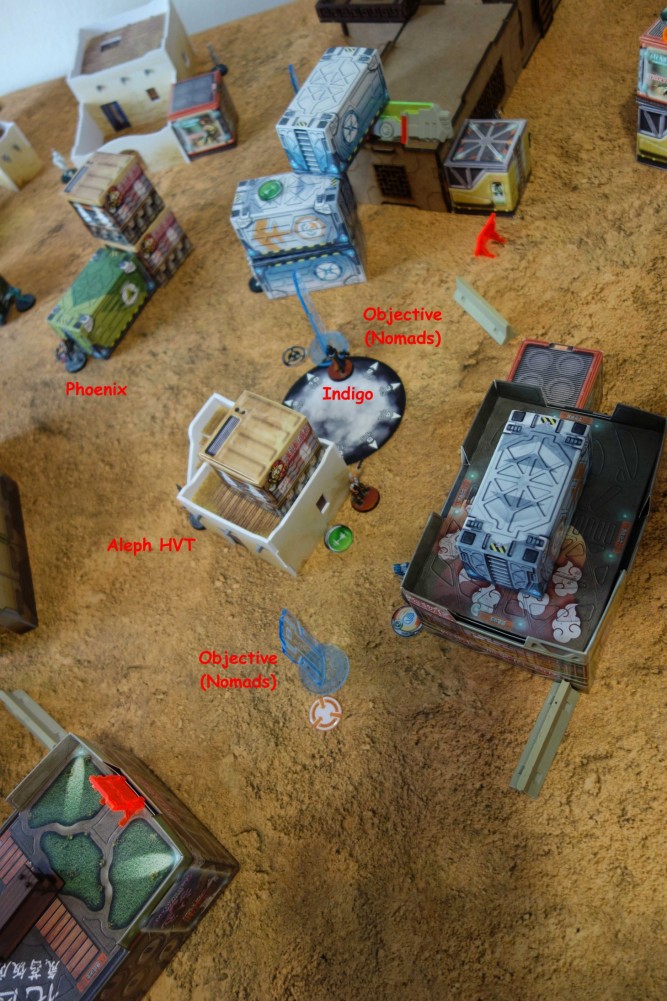 The end of turn 3