"Commander", the alien voice whispers in his head, "we have... need of you. Our mutual enemy in Aleph has deployed a contact force into the Gorge. Destroy them.

"We shall... supplement you. The Morats are eager to fight; they'll be your front line."

The Lieutenant Colonel tried to force the voices out of his head, but the corruption in his CUBE and his genuine appeal to combat ALEPH could not be overwhelmed.

Resolute, he set to battle.

The battle was Vanilla Nomads (me) vs Vanilla Aleph (them). Aleph wanted practice going second and, although he won the LT roll, opted to go second.

That choice proved to be a mistake. My first turn was devastatingly effective, killing five of his ten orders.

However, I dithered in the follow-up and so only won 6-3. 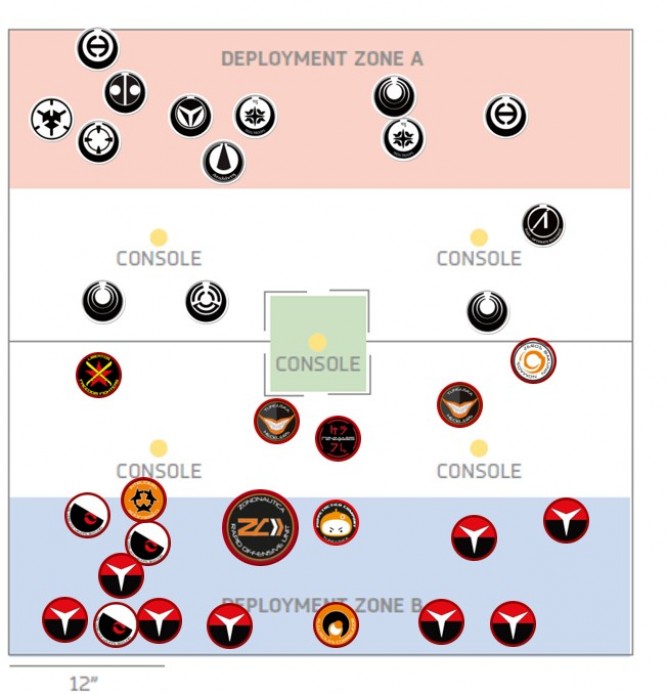 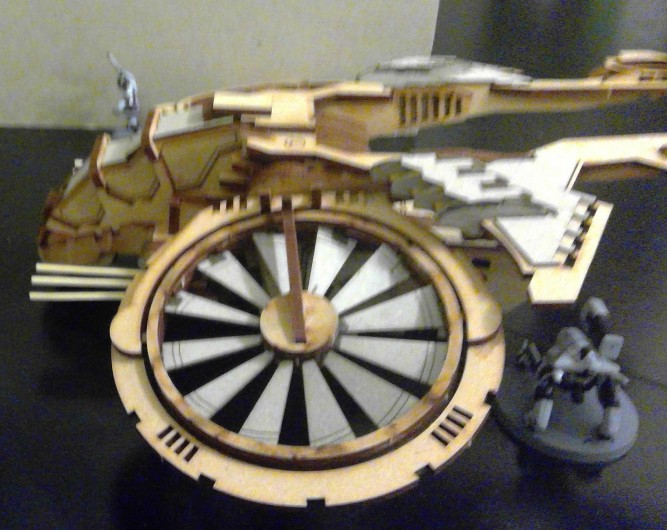 I took no pictures, but enjoy a re-enactment of the Tornadodo which crashed into the side of the Engineering Deck. A Transductor and Zero (both proxies) defend the zone

I withheld my Zondnautica, and he withheld the Proxy Mk 2 Assault hacker, who is on the left in the midfield in Hidden Deployment 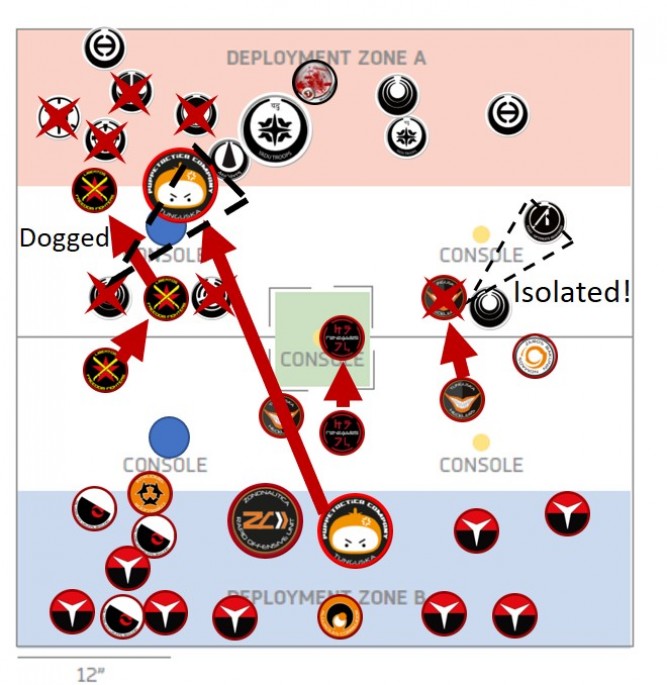 Aleph leaves the Daleth, Lamedh (top left Aleph marker) and a Myrmidon Officer visible on the LHS, and has the Proxy Mk 5 exposed in the right-hand midfield.

I take the chance to punish this. The Zondnautica kills the Daleth and Lamedh, the Intruder kills the Myrmidon Officer, and, on the right-hand side, my Heckler drops an E/Marat template on the Proxy Mk 5 and the camo marker that is DART. DART dodges successfully, but I know she's not some kind of sniper and so the Puppetbots are released.

There's a difficult moment when the TO Camo Boarding-Shotgun Proxy reveals and puts a template into my Puppets *after* their second move, which puts the two FOs into Battle-Ravaged. Sine that guy has an Assault Hacker and is NWI, this is bad for the Puppets.

Fortunately, the Liberto is able to deal with the situation. He uses a mine to kill the Proxy, uses another mine to kill the Naga (who reveals to protect the proxy), and manages to put two shotgun shots into the Thorakites. 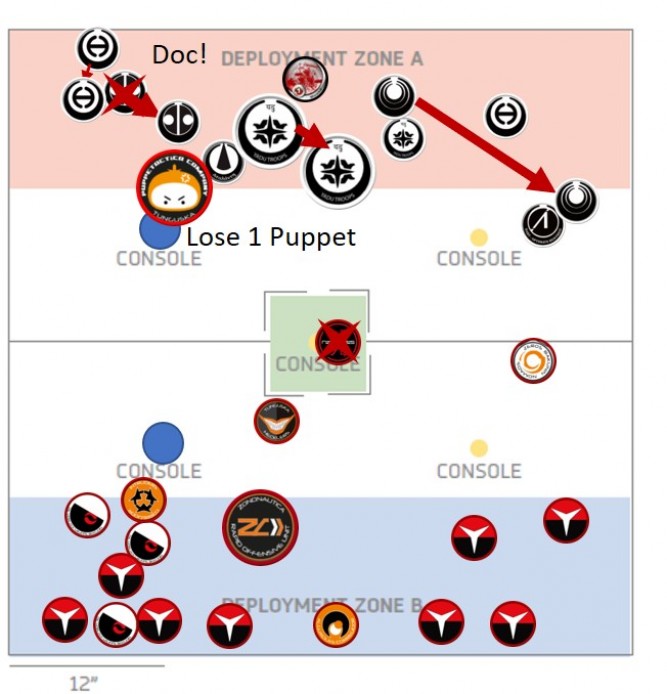 Aleph has only 5 orders, and he wants to salvage his situation. The doctor yudbot heals the Thorakites, who manages to kill the Puppetbot who is watching the Yadu and put the Markmanbot into Battle-Ravaged.

The Yadu then throws a drop bear on the Puppets and kills the Krakot, while the Doctor moves up to DART to prepare for a Turn-3 rampage. 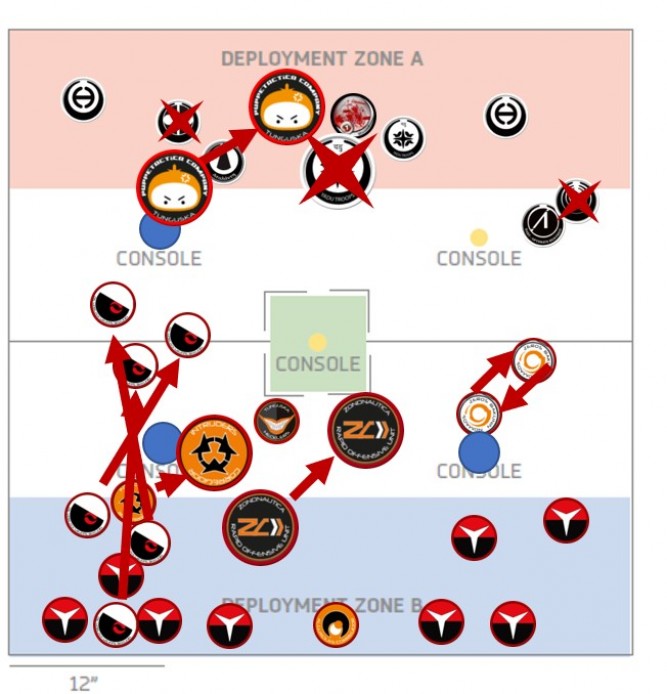 I basically waste two-thirds of this turn. Group 2 spends basically all of its orders killing the mine on the Puppetbots and the Thorakites, while Group 1 spends five orders completing the Mapping classified and having the Zero push buttons.

Given that I'd killed all of his specialists, pushing buttons was a waste of time.

But, the Intruder got a narrow line of fire on the Yadu and killed it. That was his Lieutenant, so good job team. 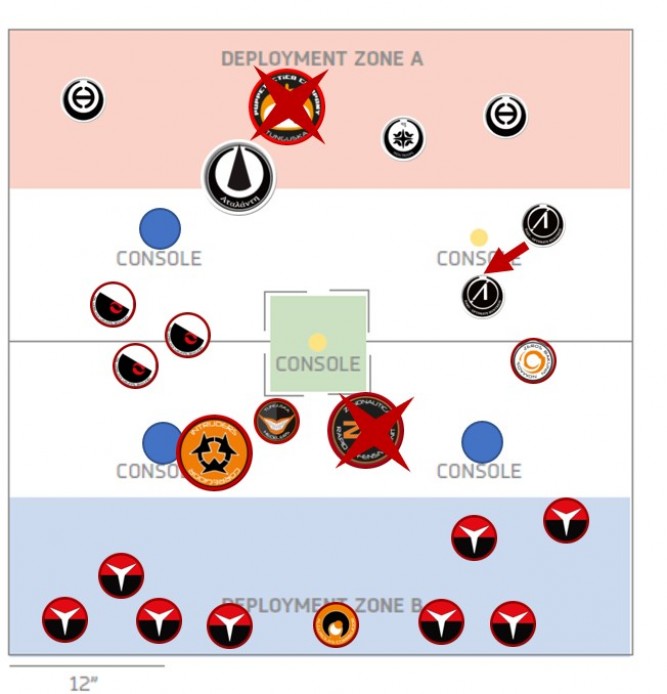 Aleph has only like three orders, and he uses them to kill the Zondnaut and the remaining Puppets.

I have a Morlock hustle up to Atalanta and stab her in the back - bad facing on Atalanta's part.

The remaining two Morlocks pile into the Engineering Room, along with the Alguacil, who is my FO.

I'm not used to having my troops get isolated as they walk into the room, so my guys are already isolated by the time I realized that they're bunched in one corner.

I use my remaining orders moving the Heckler to watch the Yadu - but I've forgotten that Yadus are Veteran and thus can't be isolated. 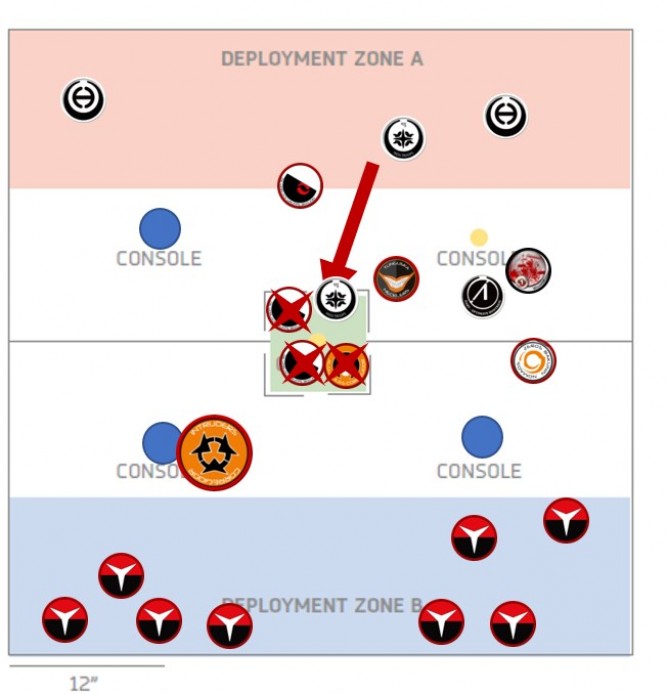 Aleph has three orders, but that's all it takes.

He walks the Yadu into the Engineering Room and puts a Heavy Rocket Launcher that covers all three of my guys while tanking the return-fire.

He rolls a crit on the all-important single HRL shot, and that's that. All of my troops are dead, while he's still alive. I secure his HVT and have consoles, but he's got the central room.

My first turn was both lucky and well-played for me, and mildly badly deployed on my opponent. I removed five of his ten orders, and moreover forced him to spend his first turn reviving his specialists.

I was able to follow up and put him into Loss-of-Lieutenant on Turn 2, along with bleeding even more orders. But I got distracted by consoles and classifieds, and failed to position my own troopers for the final turn Engineering Room push.

My third turn, I got completely flat-footed by the Isolation of the Engineering Room. I moved my troops in on the second half of a move, and was thus unable to re-position them afterwards. By the time I realized that all of my troops were caught in a corner, there wasn't anything to do.

I knew his only play was to walk the Yadu into the Engineering Room, and that he'd only have 3 orders to do it. I figured the Heckler, with its E/Marat, would be enough to stop it, but I forgot that Yadus are Veteran and thus immune.

All in all, I have to give props to Aleph for (a) keeping up a good attitude while getting curb-stomped and (b) turning what should have been a 10-0 annihilation into a 6-3 minor victory.