Night of The Maligno

The Wrecking Belles were not looking forward to return to Human Edge. They have been tied into the disappearance of Lady Sun Wei; a prominent Triad Boss who had been profiting of embarrassing videos of Apple Pie’s time as a captive of the Magpie Council. And to make things worse, as soon as they landed, Purple Tanager, the Hafza that had joined the team before going to Kurage, had been immediately recalled for Hafza duty; proving the old saying that “You never stop being a Hafza.”

So, when the Spaceport looked like a post-apocalyptic warzone, with innumerable hull breach warnings and every person either shooting, hurling or punching someone or something else; their mood did not improve at all.

“What in the name of everything cinnamon swirled is going on?” asked Odalisque Apple Pie, not sure she wanted to really know the answer.

“Bar fight.” replied Sireen Barakat, CEO of Sand Cats Tactical Security LLC. “Some Fusilier got mixed with the wrong people and things have escalated since.”

“Come, there’s a trespassing in progress at one of the Ramah Infirmaries and we’re the closest unit.” finished Sireen adjusting a 360° Visor. 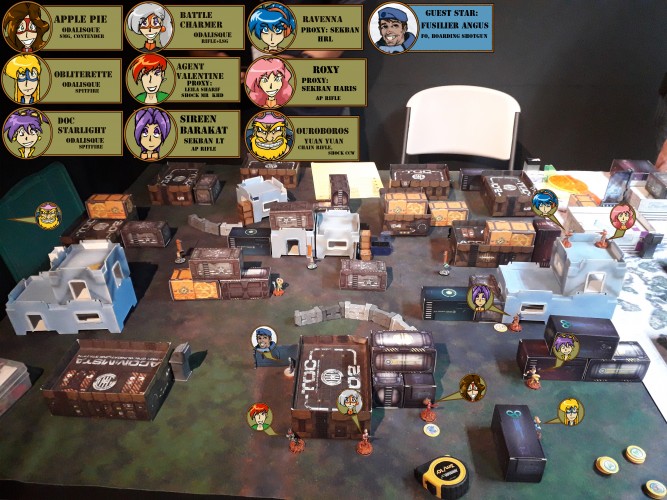 Sireen Barakat and her escort entered the compound through a side entrance; while sending the Wrecking Belles to investigate the area where the intruder alarm was triggered. It wasn’t long before Agent Valentine bumped into a very lost and very confused Fusilier Angus.

“Oh, that explains a lot.” she said with a smirk. As a Husam Spec-Op, she was privy to Fusilier Angus’ reputation as a trouble-magnet.

“You are trespassing!” said Apple Pie bringing out her submachine gun. “Drop your weapons and there won’t be troub- 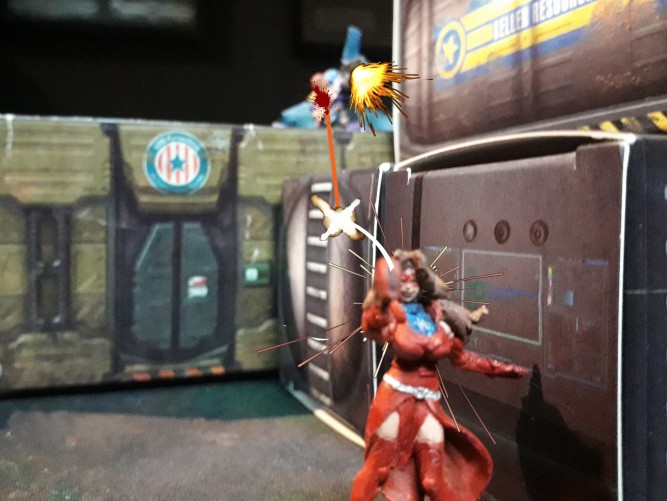 A rather large Yuan-Yuan dropped behind Apple Pie and opened fire with his Chain-Rifle on her. Without turning, the Amazonian brunette shot back at her attacker, in an uncanny display of the impressive Odalisque training.

“Are you ok?” asked a bewildered Angus, still unable to believe what he just saw. “He Chain-Rifled you almost point-blank!”

“Yeah, he did.” replied Apple Pie not feeling the need to explain that Odalisques have Subdermal Armor to a PanO trespasser.

“Boss, a Maligno has stolen a vial from one of the storage units!” came the distressed voice of Ravenna, who was trying to find higher ground. “And he’s USING IT ON HIMSELF!!!” 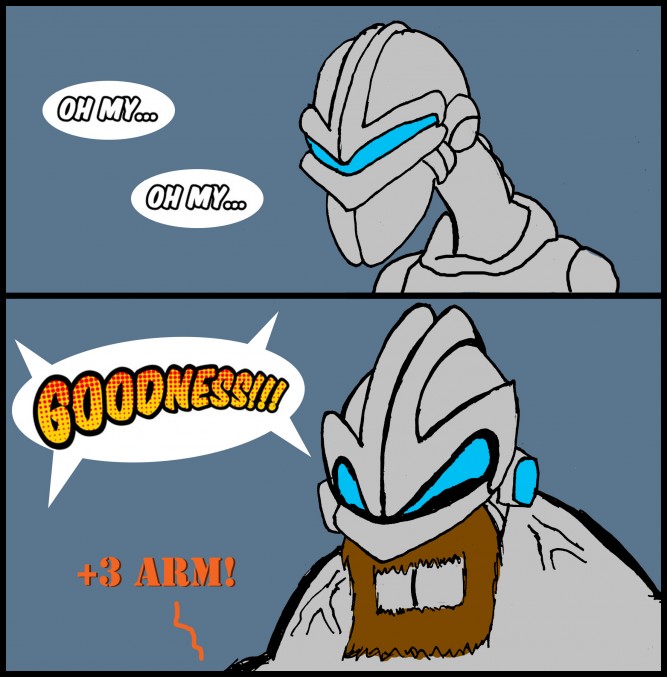 “I have a Makrepp on my sight.” replied Roxy, who had followed Ravenna to provide her assistance. “Can’t get a clear shot.”

On cue, the sound of heavy machine gun fire and heavy rockets flying told Sireen someone had not followed orders. 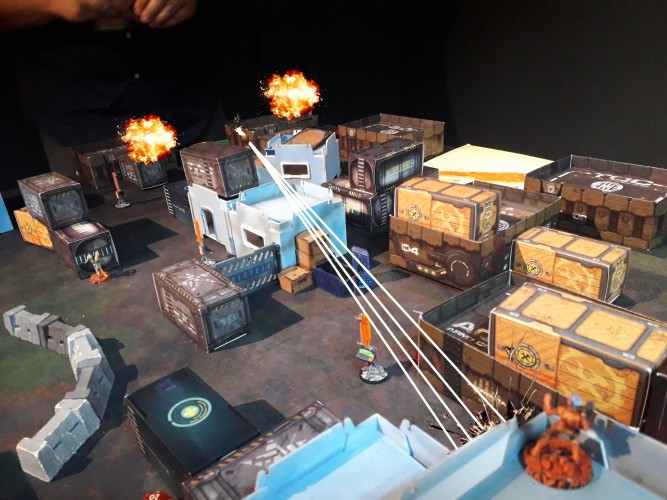 “Q-Drone!” said Ravenna to her commlink. “It’s too far away to be effective on me but...”

“Yes, I hear you.” replied Sireen. She needed the Wrecking Belles to secure those storage units at all cost. “Boros, you’re up! Blind that thing!” 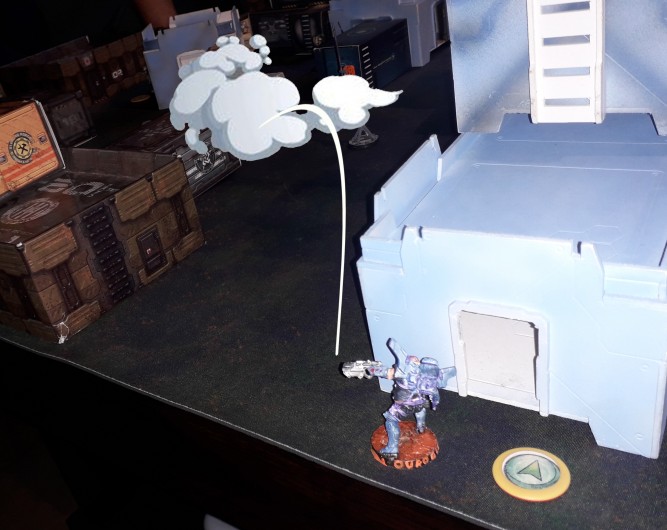 "As you wish, Madmoiselle Barakat!"

Boro’s smoke screen was effective enough to block the Q-Drone’s sight towards where the Wrecking Belles were posted.

“Ok, Wrecking Belles, show these aliens the meaning of your name!” said Sireen with pride.

“Does she know we don’t like to be called that?” said Doc Starlight to the rest of the members of Unit Foxglove, better known as ‘The Wrecking Belles’

“I don’t think it will go away any time soon, dear.” replied Battle Charmer in her melodious tone.

"No it won't" said Obliterette with resignation. She stepped forward and locked onto the Nexus Operative that had been laying suppressive fire on the central lane. 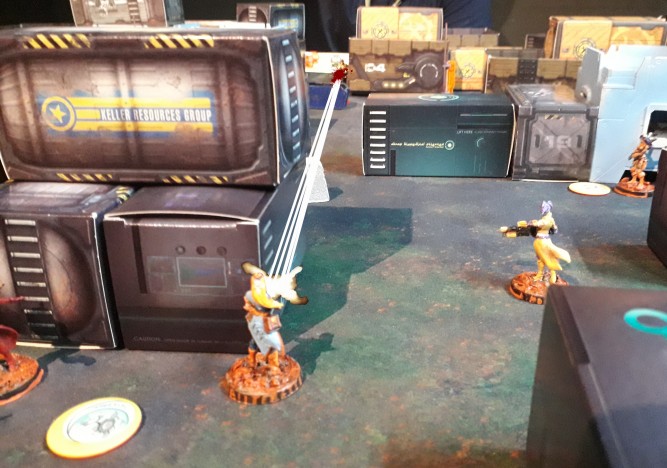 The Nexus Operative fell to Obliterette’s relentless assault; bringin his forces into disarray.

“Looks like you got the leader.” analyzed Apple Pie repositioning to guard the rear.

“And we have an open pathway, nice!” finished Doc Starlight and starting to go into the open.

“Not so fast!” heeded Agent Valentine in an uncharacteristic urgent tone. “I see the Maligno. He sure has gotten bigger.”

“Perhaps he’s happy to see you?” offered Angus, who up until now had stayed quiet and still.

Apple Pie disarmed Angus and unceremoniously threw him on the floor and restrained him.

“Next time you feel like joking remember, it’s easier to return your cube to PanO’s High Command.”

“You ok, Apple?” inquired Obliterette a bit concerned with her friend’s rather aggressive response.

“I’m taking out the Maligno.” interrupted Agent Valentine and let lose with her Shock Marksman Rifle. 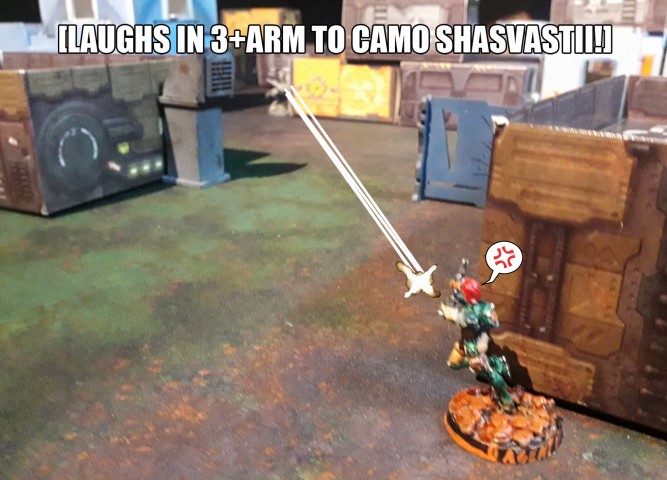 “That guy is going to be trouble.” assessed Agent Valentine after the Super Maligno disappeared behind a large container.

“We have to secure that weapons cache.” said Apple Pie moving forward.

“Wait, how do you know it’s a weapon’s cache?” asked Obliterette quick on the uptake.

“Because I’ve seen several of those aboard the Amberwitch.”

And so, the penny dropped. The Amberwitch was the massive Lab Ship in which the Equinox Cell CINDER operated, and where Apple Pie had been tortured for five days by three psychotic renegade Reverend Custodiers.

They had gone to Kurage on a tip that Sireen’s father and member of Cinder, ‘Bull Shark’ Barakat was profiting from the crisis; but they had not found a trace of him or the Amberwitch during their time at Dawn.

“No wonder you’ve been edgy- OH NO YOU DON’T!” said Obliterette shooting at the general area where the Super Maligno was. 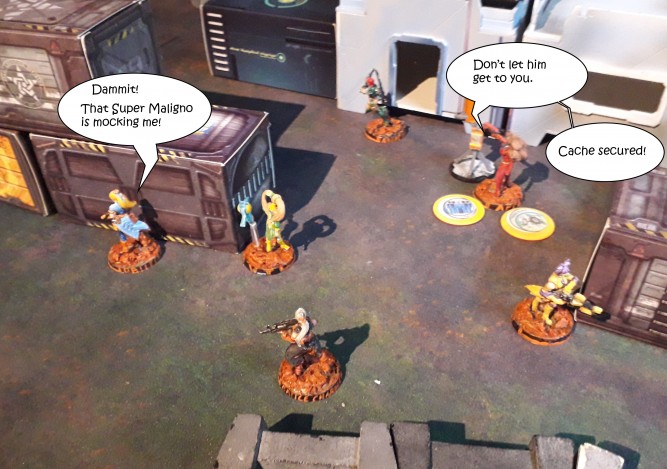 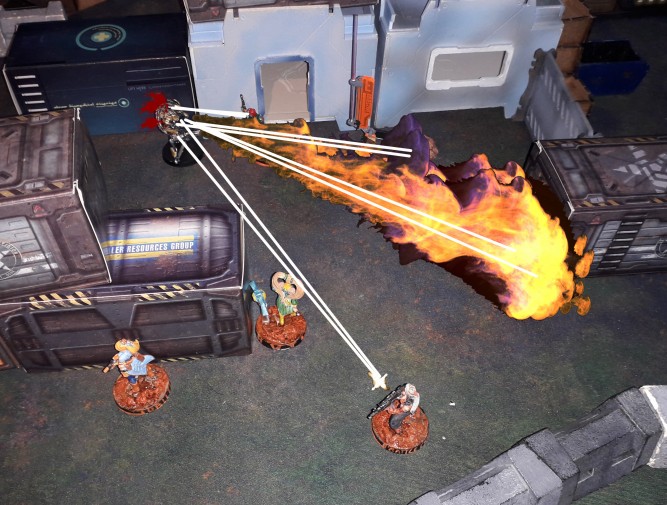 Apple Pie woke up clutching the gantry at the Desert Duchess’ Med Bay. She could still feel her skin burning, but tried to reassure her brain it was just a phantom pain. She noticed that Sireen was on an adjacent bed and being pumped some IV infusion.

“What happened?!?” she asked extremely concerned.

“She got a legal citation from the Interplanetary Court of Justice.” replied Lebetine Viper, the Janissary Akbar Doctor. “Some bloke named Shasworth is suing the Sand Cats. Big time. That was enough to reactivate her ulcer.”

“You hurled blood all over your desk!” admonished Lebetine Viper threateningly. “Don’t make me restrain you!”

“Apple, meet the Belles in Conference Room 3.” interjected Sireen quickly as the Janissary Doctor marched in her direction. “You are now authorized to use the Sand Cats and the Desert Duchess at your discretion.”

Apple Pie stood from the gantry, nodded in thanks to Sireen, and headed for the door. The Amberwitch was still in Human Edge, there was no time to lose.