The bar's patrons were... it would be polite to say 'boisterous', though such a term hardly conveyed the roar of laugh and argument filing the air, set to the beat of emptied glasses thudding down onto tables. 'Drunken and disorderly' might be more accurate, but a keen eye could pick up order within the chaos: the informal hierarchies between mercenary companies as they played out their rivalries, the competition for attention of the best amongst them by those with contracts to arrange. This, it was said, was the ecosystem of Harry's Bar, what drew hired guns and those with cash from across the Human Edge. But, atop it all, a new layer was settling: the agents of the Sphere's great powers probing for advantage as the balance here on Novyy Bangkok shifted.

That was why Zhou Shiwen was here.

With tensions rising fast, the StateEmpire needed information: who were the hostile actors, what were their aims, how could they be neutralized. And so, cup of what it would be generous to term 'bathtub baiju' in hand, he scanned the crowds. Intelligence was obfuscation, but there were 'tells' for those who knew to look... a brashness to the natives of Dawn, a blink from the agents of Concilium when circumstances shifted, a certain something in the smile which marked out a Party emissary. And... yes, there it was: a particular rigidity of movement marking one who had spent too long among Vatican liturgies, marking operatives of the PanOceanian military orders. Their presence meant the so-called 'Hyperpower' was preparing for direct action, and could be leveraged to encourage Japanese traitors into action as well.

Curtailing them out of the gate would be ideal. 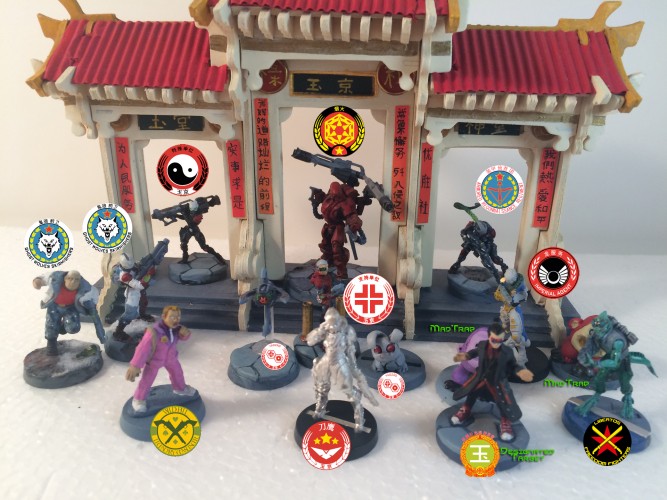 StateEmpire forces assembled for operations at the Bar. 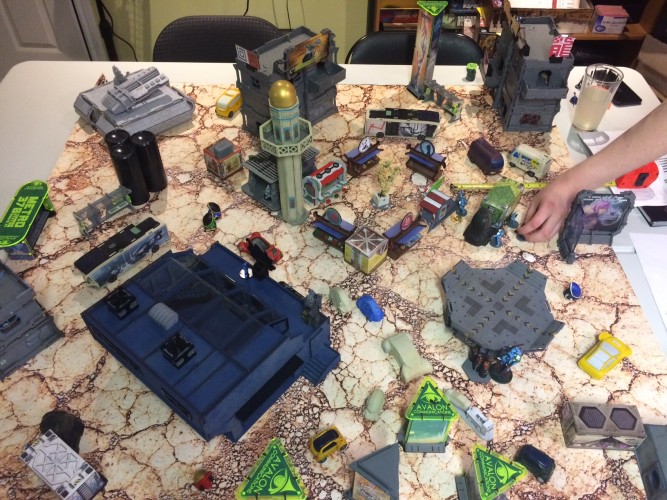 The streets of The Strip surrounding Harry's Bar.

Initial deployment was (with hindsight, excessively) cautious: Neurocinetics Yan Huo watching from an elevated position, Guilang and Libertos peppering the midfield, Zhencha positioned to defend the flank, Zhanshi Yisheng and Daoying both hidden within the cover of buildings, the former having their Servant REMs placed to provide medical assistance. 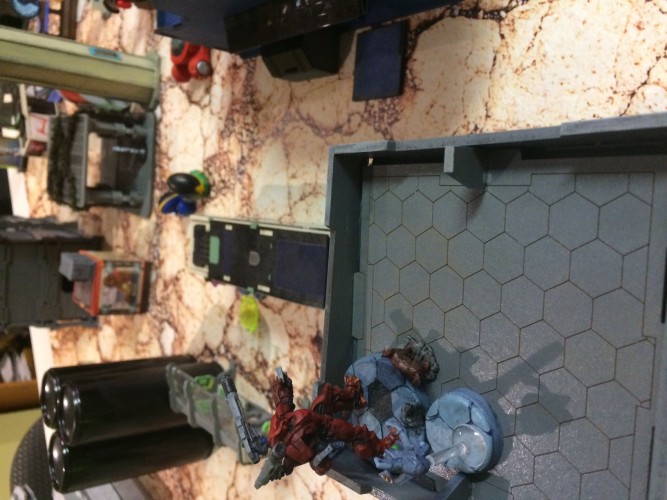 Opening maneuvers involved a Guilang placing down a deployable repeater, to restrict the advance of the enemy TAG and heavy infantry, and then advancing the mission's free Wild Bill up the field to engage in a gunfight with both the enemy linkteam and the opposing Wild Bill. This took down one member of the link, and injured the opposing Bill, but spent far too many orders doing so. 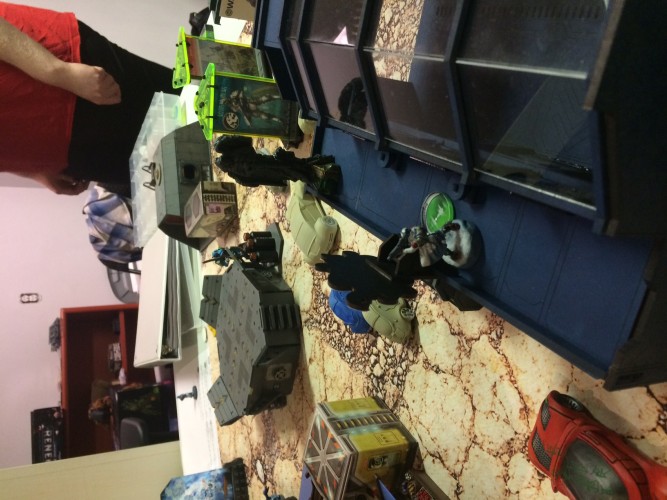 The enemy Tikbalang then advanced up the flank, clearing the Guilang and escaping unscathed from a MadTrap before engaging the Yan Huo. The Invincible won this exchange, taking down the TAG... a good outcome.

Of course, it did not destroy the Tik entirely, leaving a chance for an engineer to rush forward and bring it back online. This required deployment of Yu Jing's ace in the hole... a Hidden Deployment Hac Tao. 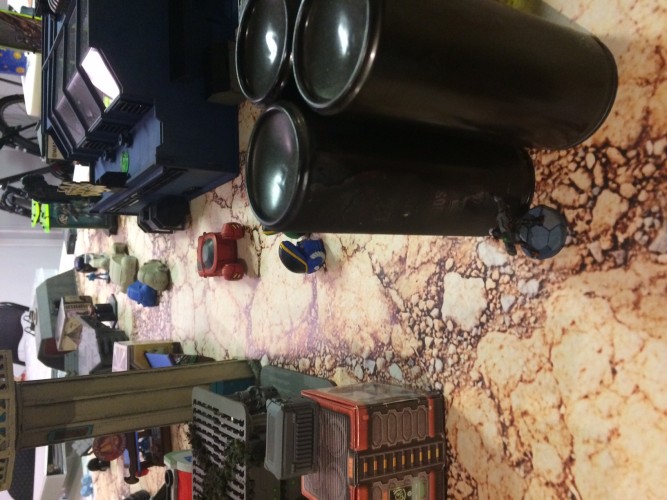 Alas, the engineer managed to avoid the elite HI's AROs and make it to target regardless, reviving the TAG while enemy fire felled the Hac Tao. The renewed exchange of fire did not go well for the Yan Huo, and it too went down.

The following turn, these losses were reversed by the legwork of the Yaozao, who managed to revive both Yan Huo and Hac Tao, though they themselves did not survive the effort. 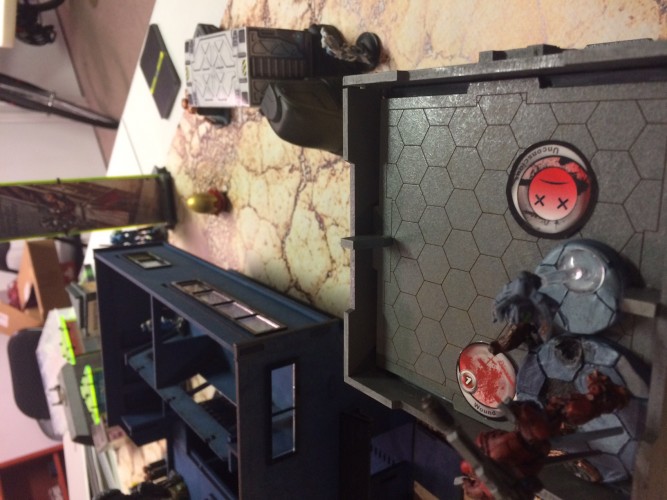 The enemy advance renewed with the drop of a Crusader, who forced the Zhencha to reveal but was felled. The Tikbalang then advanced, and engaged the Zhencha in a surprisingly lengthy close combat before the massive mech finally felled the pseudo-HI. 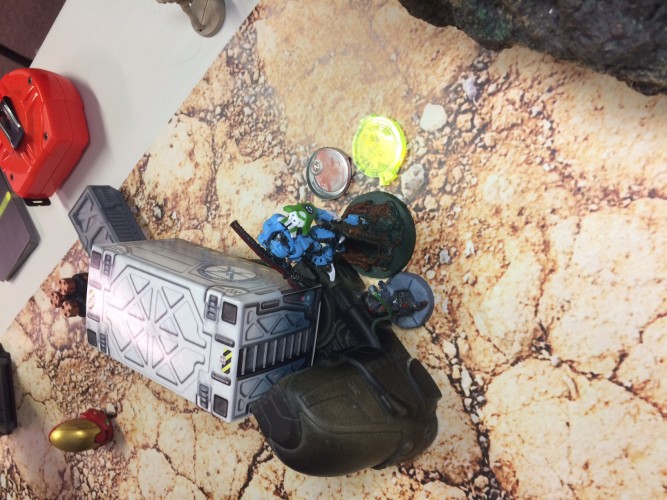 Is there anything more Yu Jing than getting into a knife fight with a TAG and refusing to die?

The rest of the battle became somewhat more one-sided. The enemy lieutenant survived both a Libertos SMG Surprise Shot at close range and two rounds of Zanying breaker-combi fire (in the BACK!), and I'd needed at least a little luck there to have a chance. That left the foe free to advance a Santiago killer hacker to detonate the brain of my Daoying hacker-lieutenant, while their Wild Bill circled around to hunt down the Designated Target.

Zhou Shiwen blinked, the bright lights of the medical ward disconcerting. Had he been... ah, no, a wince of pain confirmed there has been no Resurrection, merely conventional treatment.

With effort, he sat up, his questioning gaze prompting an attendant to respond.

"Wild Bill shadowshooter, sir. Took you in the shoulder, you're lucky to have made i... wait no you can't, you need to rest..."

Zhou legs had already slid over the edge of the bed, another wince provoked as body rose to take up its full weight once more. Already his comlog had begun to call up reports, cascading newsfeeds of ripple and consequence.

"A setback, one which demands work to repair. There will be time for rest after our triumph... until then, the ascendance of the StateEmpire waits for no one."