Impasse at the Pit

The corridors of the Jiyuan Operations Hub rang with klaxons and flashing lights. It had been such for days, ever since the Ikari had launched their assault to disrupt the StateEmpire on Novyy Bangkok. Their operation had achieved undeniable success, and the enthusiasm behind it was clear to Zhou Shiwen: Yu Jing had advanced upon the Ikari's haven at Harry's Bar, and investigations there would lay bare that the mercenary company's actions on this asteroid, and their actions during the Kuge insurrection, had been the result of Shasvastii infiltration. That revelation would make clear they were enemies of humanity, and so halting it was for them a matter of life and death.

But the StateEmpire would brook no disruption of its efforts, the fate of humanity was at stake. The criminal-mercenary elements would be suppressed, along with their allies.

One such ally were the agents of the Nomad Bakunin mothership. Their support for the mercenary disruption was no surprise, Party officials well knew that those who bore the name of the 19th Century anarchist could not be trusted to do what must be done.

They would need to be suppressed. 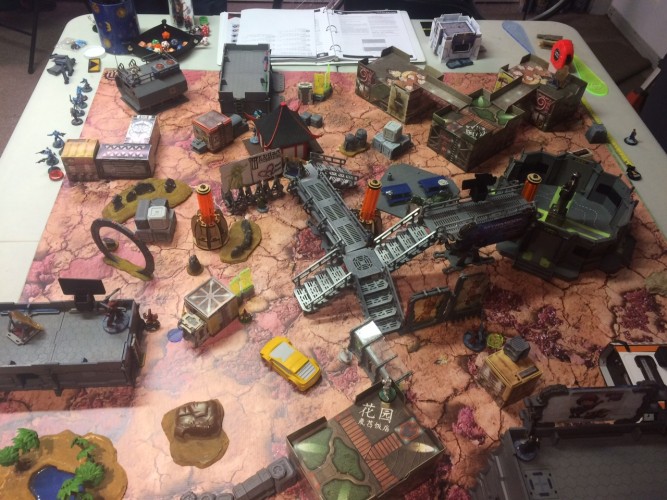 Initial deployment left the board quite covered on either side: for Yu Jing a neurocinetics Yan Huo and a Haidao sniper, for Bakunin two Sin Eater snipers. Going first, this would present a challenge. 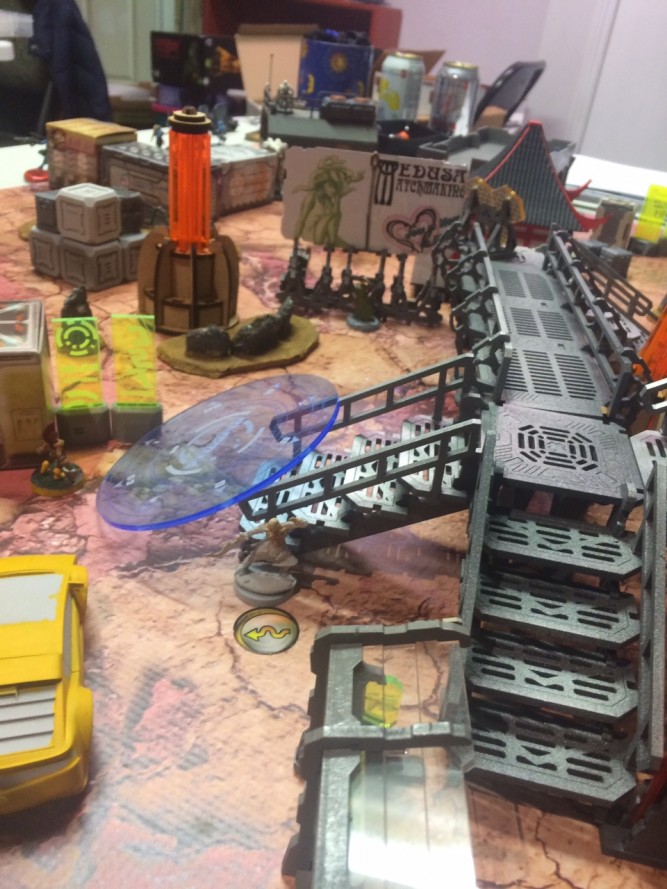 A Shaolin leapt forward to provide a little bit of smoke cover. 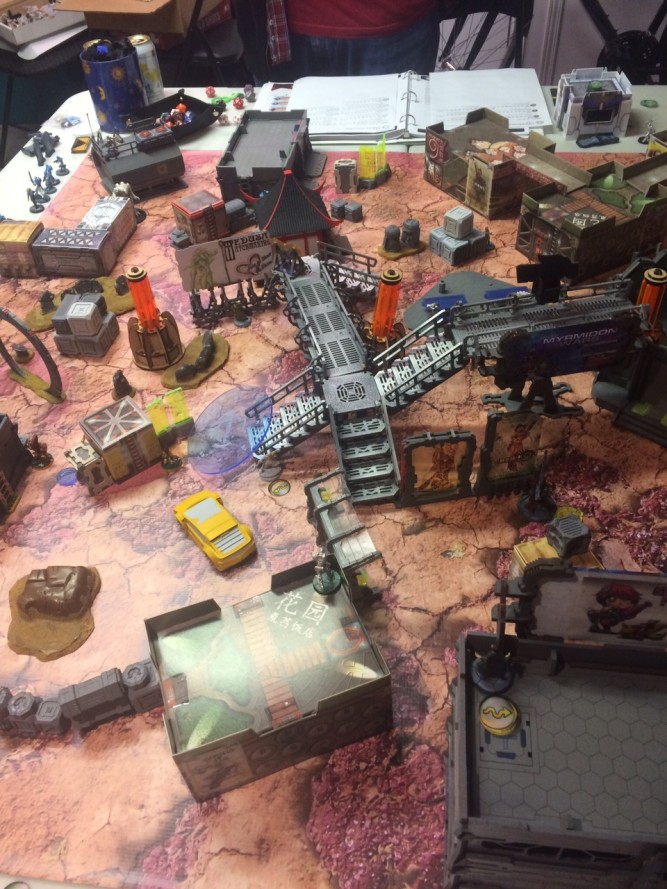 And an exchange of fire dealt with one Sin Eater, opening room to maneuver.

However, there wasn't much left to maneuver WITH: a Zhencha zipped up to take control of one antenna, and then the Nomads went on the move.

Here, there were casualties: the Yan Huo damaged the Lizard TAG, but repairing it scored the enemy their Classified Objective, while the Haidao was gunned down.

With the TAG left peeking out on the second turn, there was an issue: an assault MIGHT pay off and destroy it, but its engineer was waiting nearby, and in the interim it could lay down fire against any movement towards the second antenna. 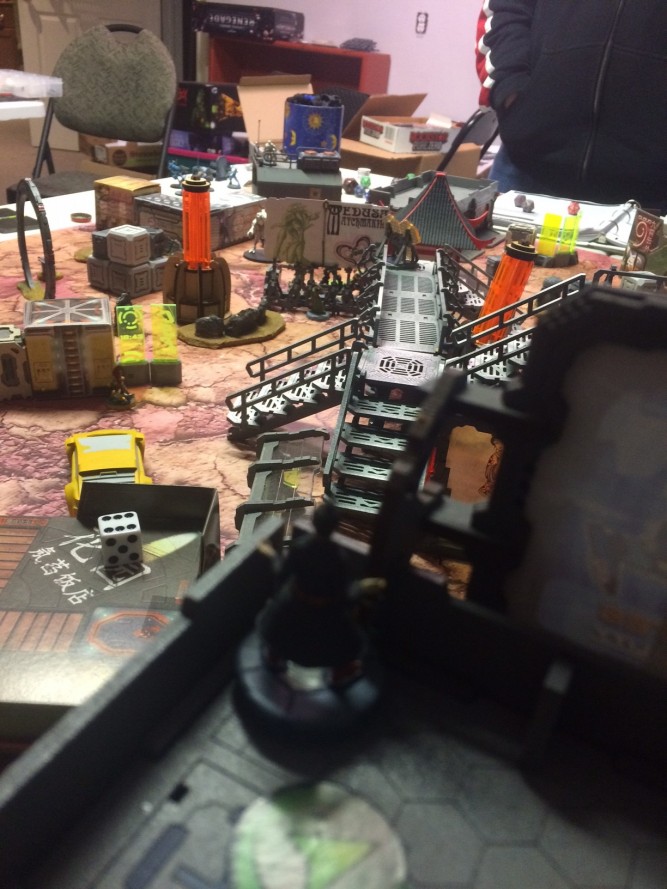 To commissar Zhou Shiwen, overlooking the battlefield with recording equipment, the conclusion was clear: from each according to ability, to each according to need, and the soldiers of the StateEmpire needed support.

A flash pulse stunned the metal behemoth, but a Sin Eater sniper round in response felled the political officer with ease. 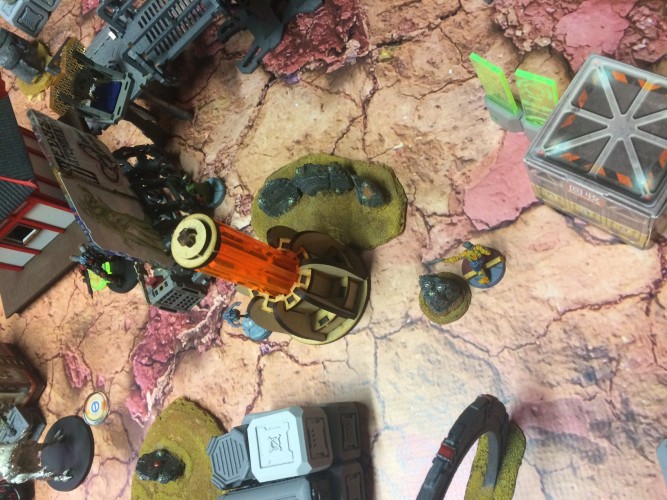 Xi is being proxied with this Kanren because Kanren are neat, not at all because I forgot to wash off mold release on the actual Xi so it broke apart when I went to basecoat it and I havent gotten around to fixing it yet...

Path somewhat cleared, Xi Zhuang leapt forward to try and reach the second antenna, shrugging off the explosive impact of a CrazyKoala. Unfortunately a misjudgement of cover meant the Celestial Guard was felled just short of his target.

Towards the centre of the board, the Mowang advanced to the tech-coffin and entered Suppressive Fire to cover enemy approaches, while a Liu Xing landed towards the enemy backfield, veteran status allowing him to score my own Classified Objective. 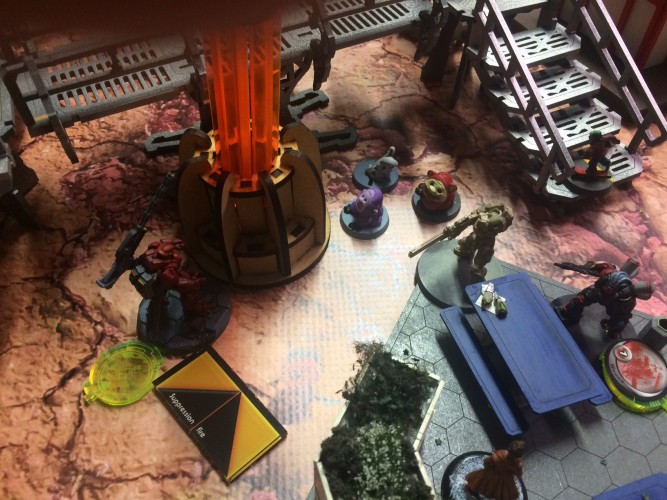 This Yan Huo is proxying for a Mowang because I... don't have a Mowang yet. It was facing two proxied Taskmasters, so this was really a true proxy war.

Here, the centre of the board came to an impasse. The advance of a Taskmaster duo with plentiful CrazyKoalas occured, the Mowang issuing a hail of suppressive fire. Poor aim and heavy armour meant neither side lost the exchange. This would continue in similar manner until the end of the game, both sets of HI refusing to break (and the Mowang refusing to spend orders that might trigger the Koalas). 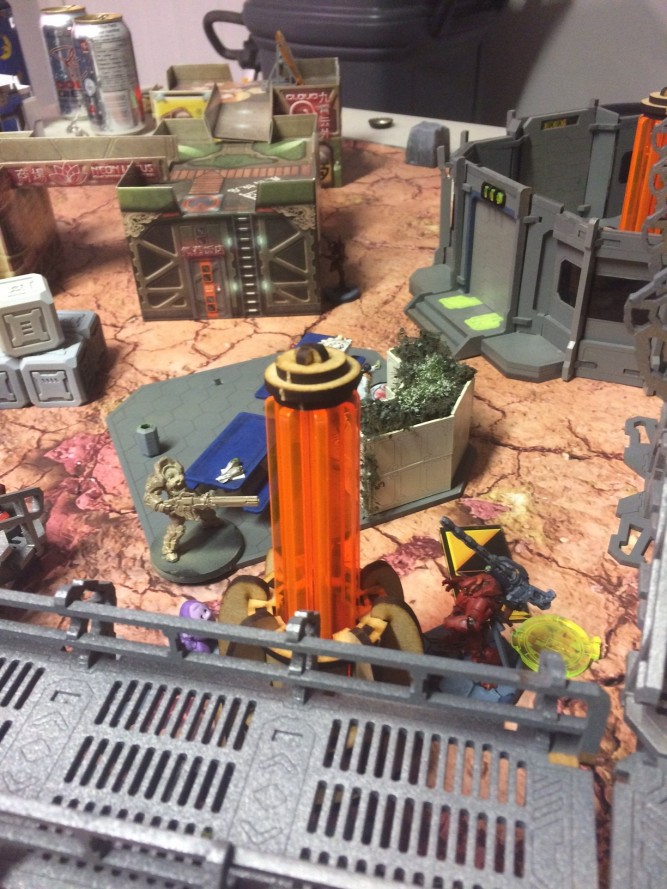 Attempting to resolve this impasse, the Daoying lieutenant revealed to shotgun some CrazyKoalas, and the Liu Xing advanced to target the enemy Warcor then the Red Fury Taskmaster. This was shockingly order-intensive, and left Yu Jing forces unable to capitalize on the opening.

In the Nomad's last turn, the Taskmaster advanced into contact with the tech-coffin, but was unable to slay the Mowang. Zoe claimed an antenna, while the enemy TAG made an unsuccessful attempt to flank and dislodge the Mowang, its path stepping it into a Ninja who had been waiting for orders that would never come. The Ninja's DA CCW brought the Lizard down, but did not advance the StateEmpire's cause, leaving the scores tied at end of game.

The klaxons continued to sound through Jiyuan's corridors, comlogs and HUDs flashing reports of mercenary advances and StateEmpire counterattacks. It would demand significant effort to push the invaders back, and this battle had not sent them fleeing... but it had ensured they did not take a step further.

For now, that would have to suffice.