Blood is Great for the Skin

After a while, every hive of scum and villainy starts to look the same. Dark, dusty tunnels through rock, seedy bars, labyrinths of crates and catwalks - the allure of exploration had faded long ago. But the people! Every human alive is unique, and every locale impresses its own character upon its people. The way they speak, the way they walk, the way they scream and the way they bleed.

(Not to imply, of course, that by such contemplation Her most beloved son might be thought to be some sort of murderous lunatic.)

He had been wandering the tunnels of the asteroid for a while now, the annoying chatter of his geist adjutant long since muted. It had been a good productive day of slaughtering Shasvatii and those irritatingly moralist criminals, and he had been pondering meandering back towards civilisation for drinks with the boyfriend before catching Aristeia! and perhaps scraping some of these organs off his armour when he heard voices and movement up ahead. Oh - one more band of miscreants, why not! 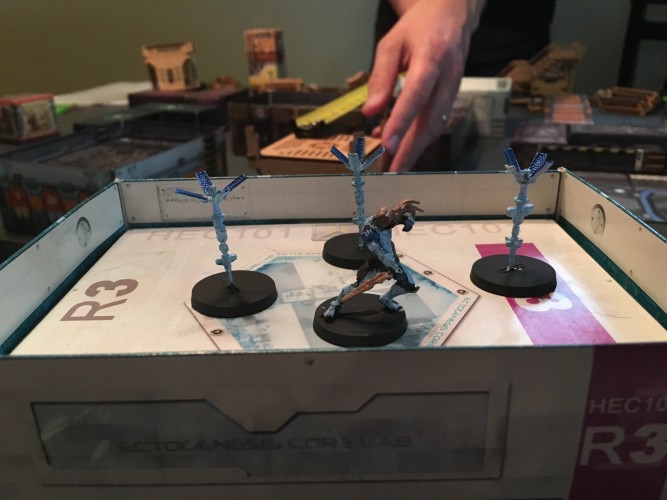 We shook the rust off of our memories of the game with a few quick hundred-point runs. And at an hundred points, what else could I possibly field? 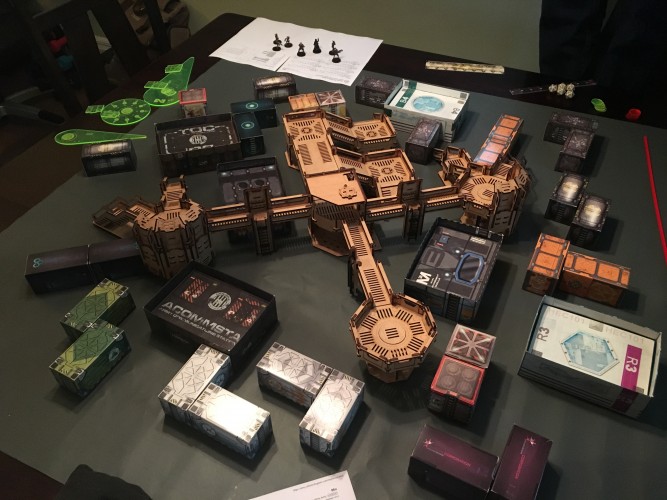 The table - I do love that balsa-wood catwalk stuff. 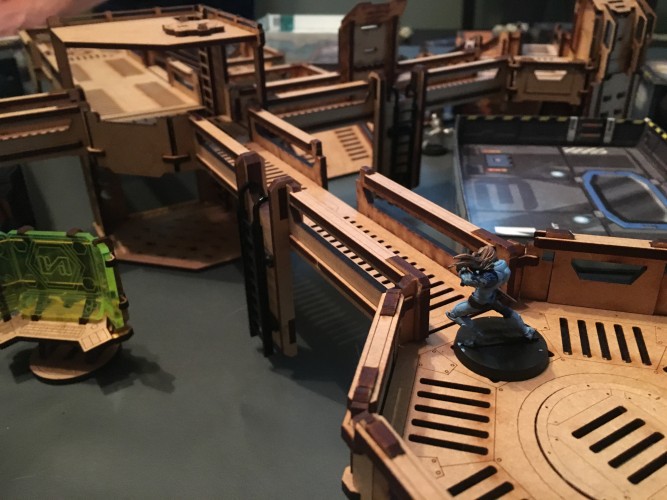 I knew going into this that there would be _some_ flaws to the list. Achilles can be in remarkably few places at once, for one, and I have remarkably bad luck with dice, so he might just be critted off the board in the first exchange. And that's very nearly what happened! The initial draw of Tacos cards wasn't very good for me, but there was a point to be scored in killing someone with a heavy weapon. Like a fool, I had Achilles shoot at their lieutenant with his D.E.P. He missed wildly and got a crit in return.

Please take a moment to consider the image of a disconsolate Achilles with a half-exploded bazooka tube on his shoulder and his face covered in soot, as one's face might be in a Looney Tunes cartoon. So he just opened up with his MULTI rifle and killed two of 'em. 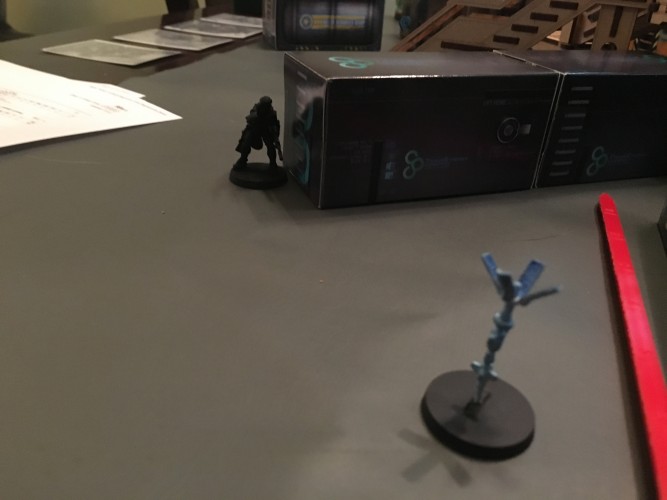 Meanwhile, this jerk was running around in my backfield, picking up cards and smashing Netrods. 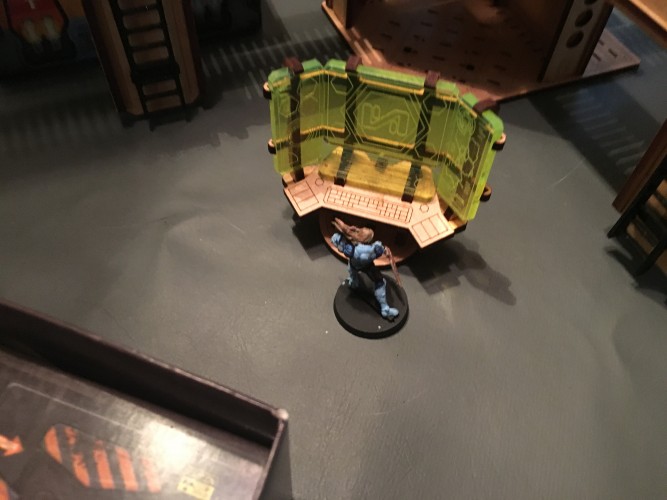 Running low on both orders and targets, Achilles wandered over to the Crate (don't ask) to claim a single card so it wouldn't be a total shutout. 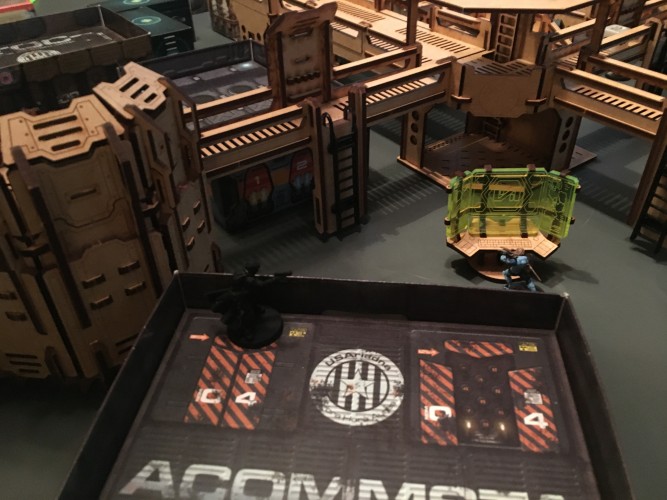 The Khawarij was certainly courageous to try and go for this shot. 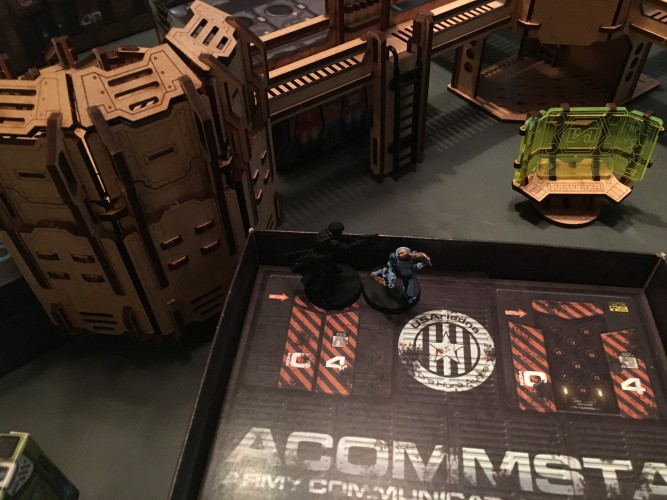 His bravery will be rewarded in the next life. By which I mean, Achilles will send him a nice gift basket when his new LHost comes online.

Being a fellow capable of basic courtesy, Achilles did take care to return his victims' cubes. And having accomplished nothing besides violence, annoying the Operations Subsection, and causing a minor diplomatic incident, he happily wandered off to get smashed. 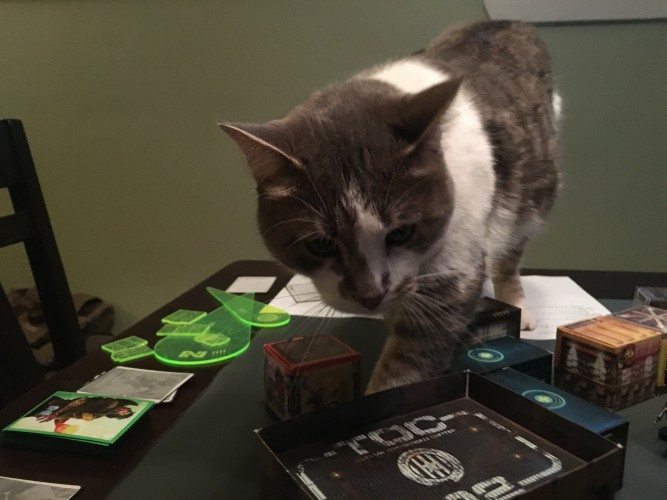