Fought At The Gallery Maze: The Chimneys
135 days 4 hours 39 minutes ago

Prologue: Alone in the dark

Truth is, they had been incredibly lucky. After the battle at Harry's Bar, a zhencha had spotted the retreating shasvastii squad as they were sneaking into the gallery maze, and had discreetly targeted one of them. The aliens, unbeknownst to them, had left a bright trail behind them, a trail the major Quin Huang had been sent to follow. When she'd reached the tunnel entrance fresher troops were already waiting for her as well as, much to her surprise, a warcor, who had asked with much insistence to tag along arguing that "pictures of tunnel fights in pitch black darkness against terrifying aliens were perfect recruitement material".

Said warcor, barely containing his excitement, was now walking by her side, as well as a zhanshi ysheng, while the zuyongs and the haidao were deployed around them in formation. Despite the darkness, the Invincible squad was moving at a steady pace in the gallery. The zuyong's flashlights were regularly scanning the walls, looking for anything the zhencha and the hulang scouting ahead might have missed. Unlikely, but they were in uncharted territory and for the major it was a good enough reason to be overly cautious, especially considering they were heading straight for a shasvastii nest.

The hulang had none of it though, for him it was the best mission ever. She could hear him from time to time, mumbling stuff like "common, common, wherever you are!" or giggling like a madman everytime he found yet another alien corpse. She wasn't really surprised, they were notoriously crazy but also specially trained as tunnel fighters, this was the perfect place for him to display his skills. Still, she'd rather have him keep quiet but she was too tired to argue, and to be fair she could feel that his cheerfulness was spreading to the rest of the squad and improving their morale.

Another couple of minutes passed. It felt like they'd been down there for days, but a quick look at the clock on her HUD informed her it had been only a couple of hours since the skirmish at Harry's Bar. The quantronic trail had long disappeared, and since then they'd been following the various fresh fluids left behind by the wounded shasvastii force, be it alien ichor or drone oil. They were walking, tirelessly, but she had long lost contact with the HQ, and she was almost ready to give up and turn back when her radio clicked:

"Boss, I think I've found it". The zhencha's words were enough to give a second wind to the whole squad.

"Copy, wait for us and don't get spotted."

Both the hulang and the zhencha were crouched near the end of the tunnel when the rest of the squad reached them. She nodded towards the two scouts, they nodded back, the hulang lighted-up his flamethrower and they entered the room in front of them, quickly followed by the zuyongs.

It was an old sewer system, likely abandonned long ago but despite the air filters of her helmet the smell was still strong.

Not so abandonned though. She spotted 3 antennae, apparently functionnal, and quickly moved toward one of them. It was an old yu-jing model, refurbished and upgraded with alien technology. This sewer was probably one of the fabled Yanying listening post hidden in the gallery, but the alien had managed to take hold of it. Still, tampering with them wasn't that hard, and by blowing them up they could trigger the emergency recovery mechanism and send a signal directly to their HQ to ask for reinforcements.

She heard a scream behind her. She turned back only to see one of the zuyong frantically agitating his arm that an alien creature was biting. The hulang reacted first, kicked the critter away and sent hit flying against a wall before spraying it with napalm. As it was burning alive, it let out a long, shrill cry, which was abruptly interrupted by the major shooting it at point blank with her shotgun. But it was too late, and as the creature finished burning they suddenly heard what sounded like shasvastii shouts.

"Well, it looks like they know we're here now." Said the hulang, stating the obvious. "What's the plan boss?"

The major reloaded her shotgun.

"We blow everything up." 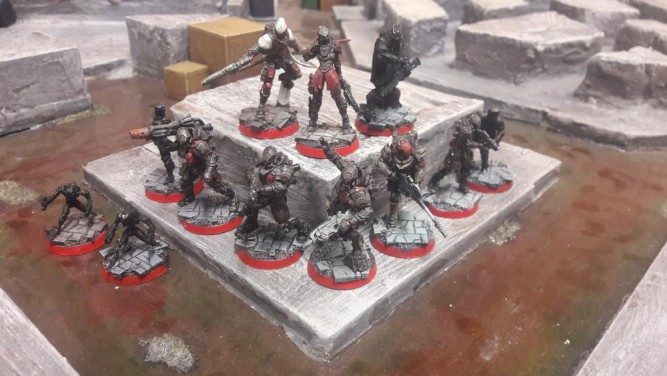 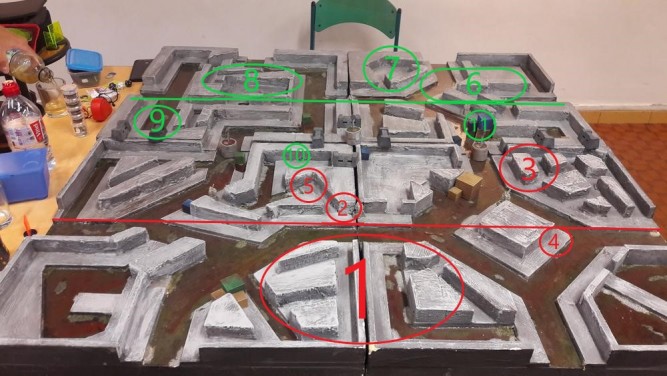 While they'd been discovered, the Invincibles had the initiative and quickly deployed themselves. The zuyong set-up a defensive perimeter in the middle of the sewer (1), ready to move on either flank to deal with the aliens, while the major got closer to the nearest antennae (2). Both the hulang and the zhencha swiftly reached an advanced position on the Invincible's right flank (3), as well as the warcor (4) whose instinct told him this was the place that would see the most action. A stranded Yaning operative had been sighted by both forces (5), and would most likely end-up being targeted by the aliens.

Meanwhile the alien responce force had arrived, and took position as well. A nox fireteam was deployed on the shasvastii's left flank (6), while the med-tech and the mentor were both hidding in a room far from the frontline (7). On the other flank, the infamous vector messer, a gwailo and an M-drone were safely entranched, but ready for action (8)! Not far from them a shrouded was lurking in the shadow (9), while a speculo killerhad already made it to the Invincible's side of the sewer (10). A shasvastii Intel Agent, a vary valuable target of opportunity, didn't managed to evacuate before the skirmish and was hiding near the nox fireteam's location (11). 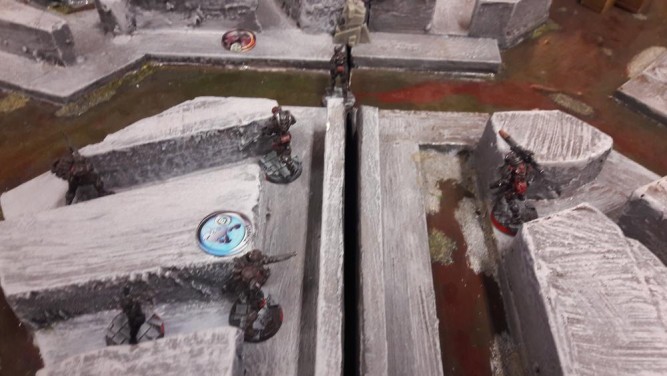 "Look, ma'am. I only need to know one thing: where they are."

The very suspicious signal coming from the left flank was worrying the major, and she decided to redeploy the zuyong team to the right flank. They moved forward a bit, targeting a few antennae on their way to gun down the T-drone before consolidating a new defensive position. 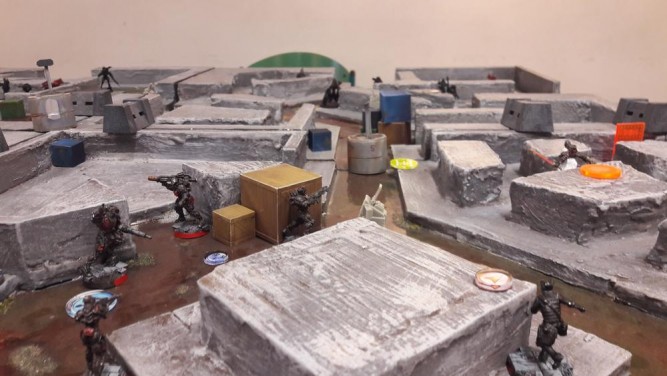 With the way completely cleared of any threat (besides the local fauna that is), the hulang rushed toward the Shasvastii Intel Agent, killed him with one well aimed burst of his combi rifle and recovered his precious data! 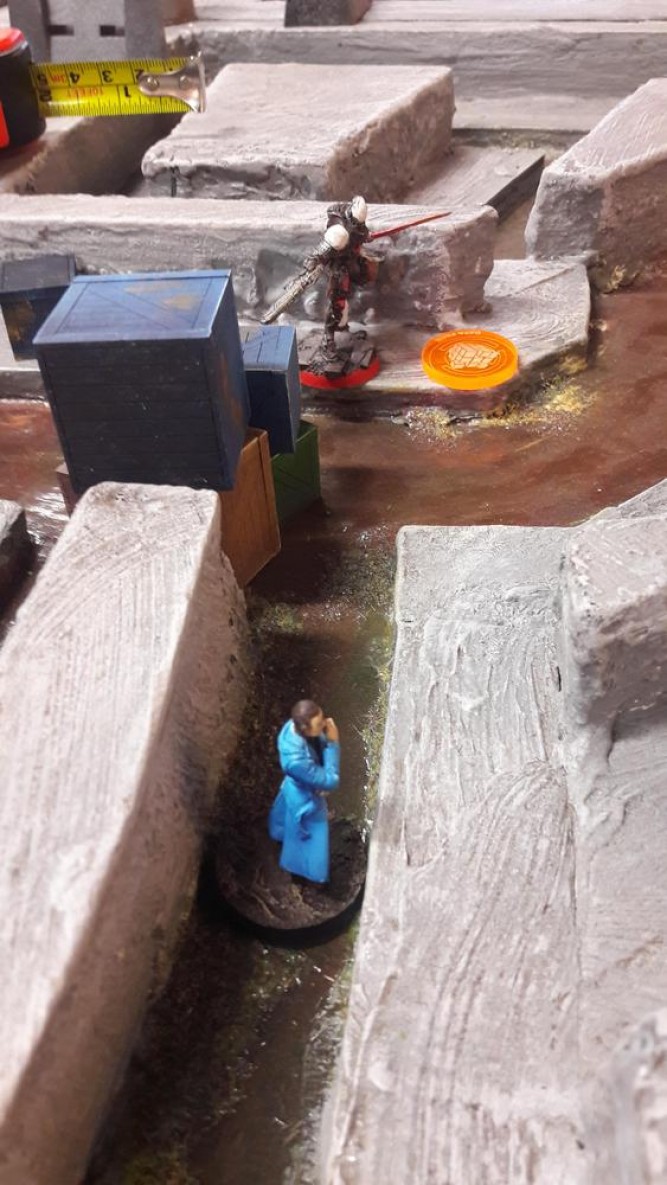 The mentor himself was the first to strike back at the intruders and shot the overextended hulang in the back with his shotgun, but the conditions were less than ideal and he completely missed his target. The med-tech managed to sneak-up to the T-drone and repair it right under the hulang's nose. 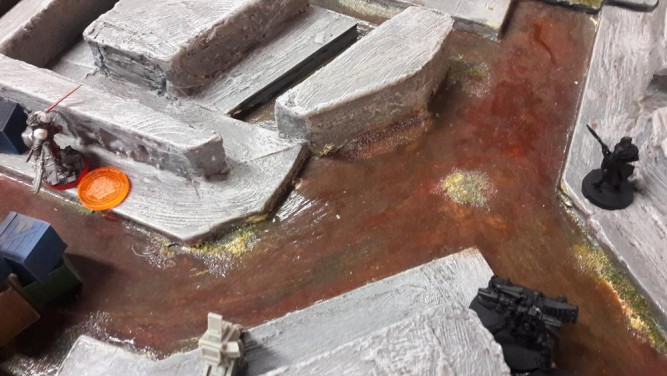 On the other flank, Victor Messer and his 2 companions sprung into action and started making their way to the Yaning operative, targeting multiple antennae on their way there. 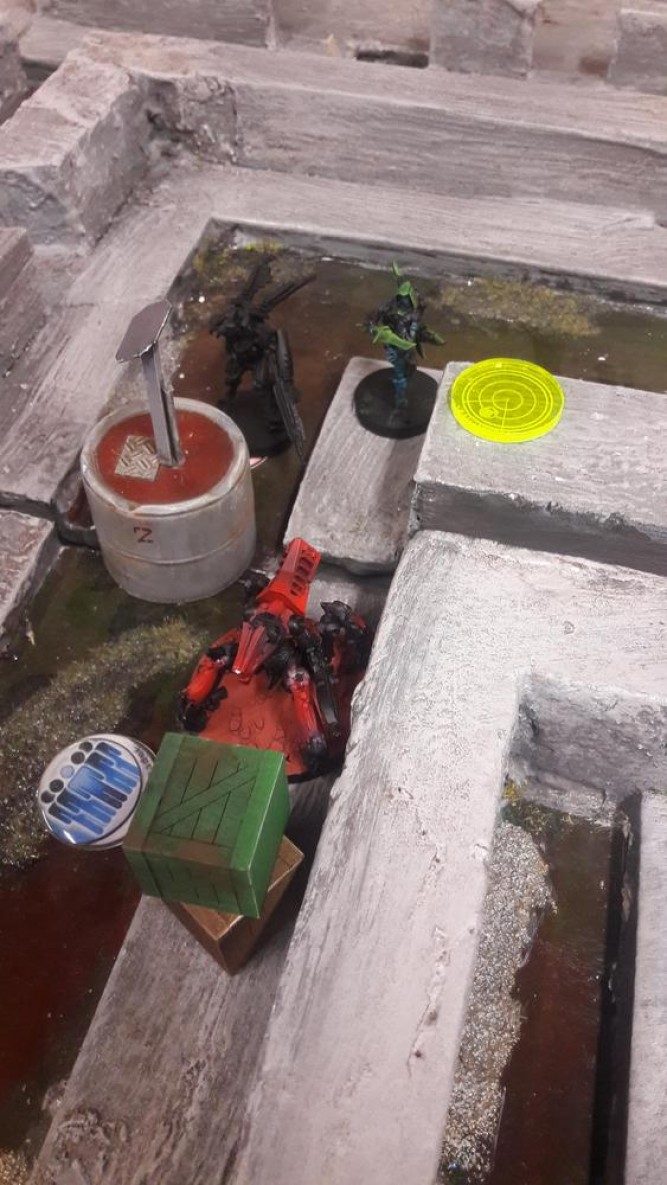 The vile autonomous agent of chaos killed the stranded yu-jing operative with 2 burst of his multi-rifle, but the noise attracted the attention of one of the many creature lurking in the sewer who pounced on the unsuspecting hacker and dragged him under the water before the gwailo could react! Is the galaxy finally rid of this calamity? 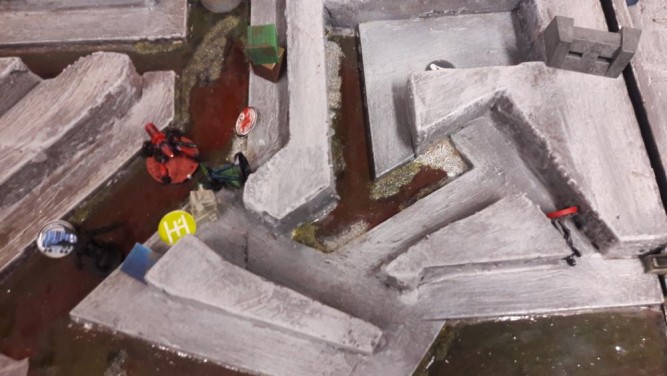 Leaving Messer to his fate, the gwailo returned to his sense and moved forward, exploiting the poor positionning of the invincibles! With the T-Drone now back online, the cross-fire of missiles and rockets left no place for the zuyong to hide, and both the HMG and the missile launcher zuyongs were killed, as well as the warcor who should have definitely picked a better spot to set-up his camera! Fortunately the hulang survived a missile to the face and dived back into cover, but the Invincible had suffered crippling damage. 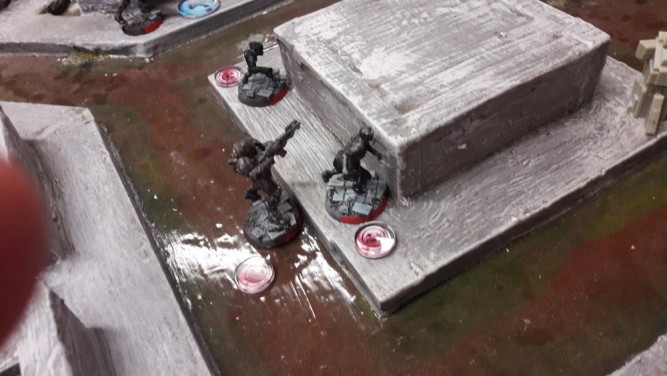 The situation wasn't looking good for the Invincibles. The major had made 2 fatal mistakes: leaving the left flank unprotected, and not finishing-off the T-drone, and both of them had been cleverly exploited by the shasvastii mentor. Now, without the missile launcher, blowing-up the antennaes was going to be much harder, so the major decided to put the shasvastiis in a similar situation by sending the hulang forward to deal with the T-drone, once and for all. Unfortunately, while he knocked the drone unconscious with his combi, the napalm shower that followed didn't had the desired effect and one of the nox dodged right in front of the hulang, ready to disable him with his zapper! 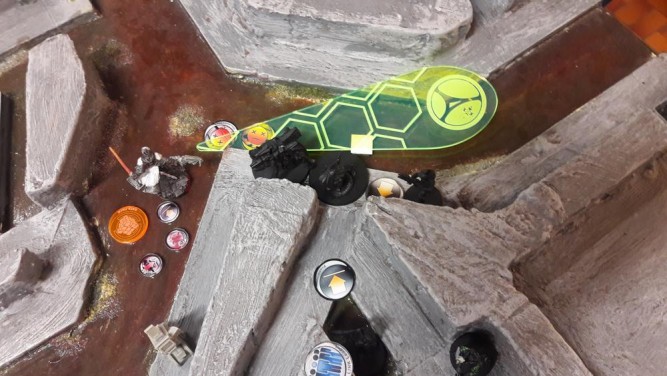 The major couldn't risk losing the hulang's D-charges as they were now her best option to destroy the antennaes, so she ordered the hulang to move back to safety and to start blowing-up the antennaes. Sadly they proved too though for him, and the Zhencha's only DEP shot didn't had any effect either. 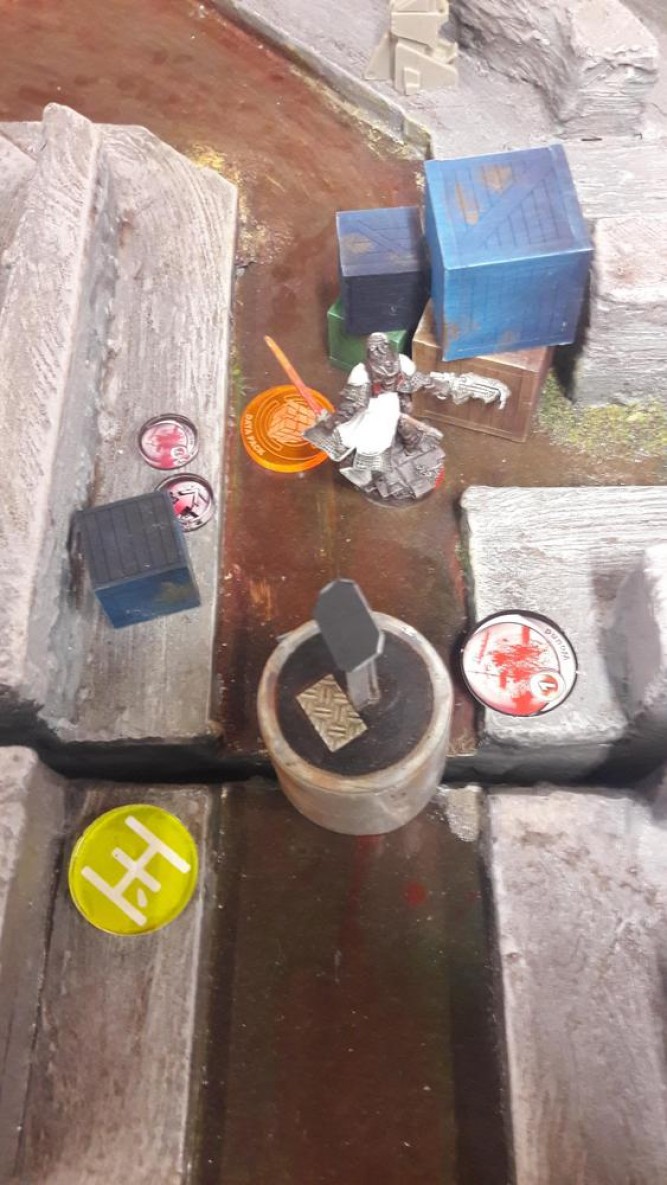 Once again the T-drone was repaired, and it started splitting missile shots left and right, aiming at the consoles targeted by the Nox behind it and at the Hulang as well who finally ate the dirt. 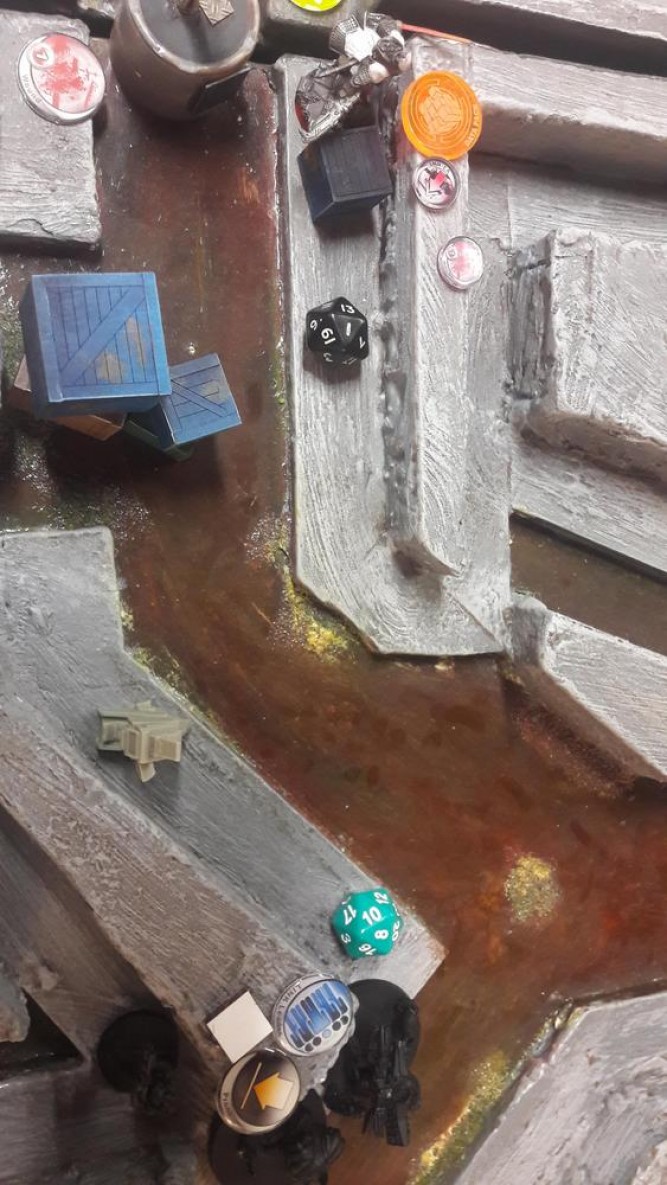 The med-tech tried to connect one of the console, but failed its first attempt. There never was a second one, as the creature that had killed Messer earlier noticed his presence and pounced out of the water once again to attack him, rendering him unconscious.

Nonetheless, the Shasvastii had destroyed 4 antennae already, which left very little hope for the Invincibles to achieve their mission. 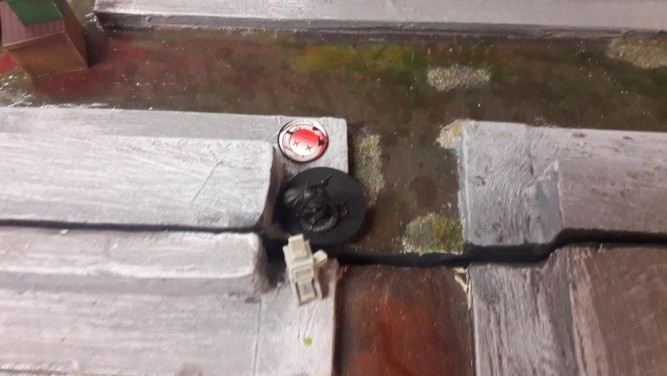 The 2 remaining zuyongs and the haidao moved forward and tried to destroy as many antennae as possible but only managed to get 2 of them. The mission was over, they didn't managed to contact the HQ for reinforcement, but they still had time to fall back. 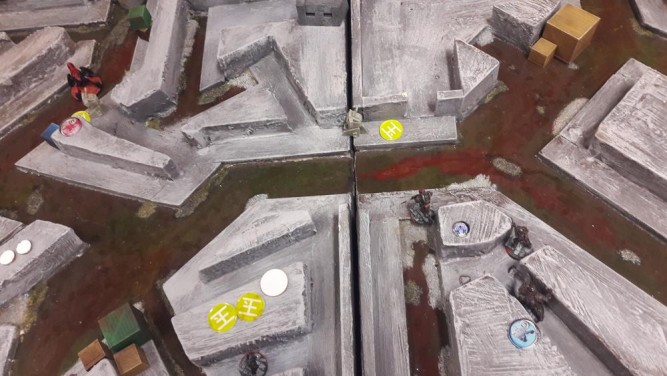 "Get away from her, you bitch!"

The head of the speculo exploded, and her body fell on the zuyong she had just attacked. The major quickly reloaded her shotgun, while the zhanshi doctor tried to lift the unconscious body of the heavy armored soldier, but she was definitely too heavy for her.

"I'll take her, run!" A zuyong emerged from the tunnel, the haidao and the zhencha on his heels, all firing their pistols at some of the horrific creatures the combined army had unleashed after them. He swiftly shoved the doctor aside, threw his fellow soldier on his shoulders, and they all started running again, firing blindly in the tunnel behind them without even slowing down to aim properly. They could hear the scream of the aliens echoing in the tunnels, making them seem much closer than they actually were, and they ran like that for 20min before they realized their pursuers had finally abandoned and fell back.

They took a short rest, only to catch their breath and get the unconscious zuyong back on her feet, and the 6 survivors of this journey in hell resumed their long walk toward the surface.